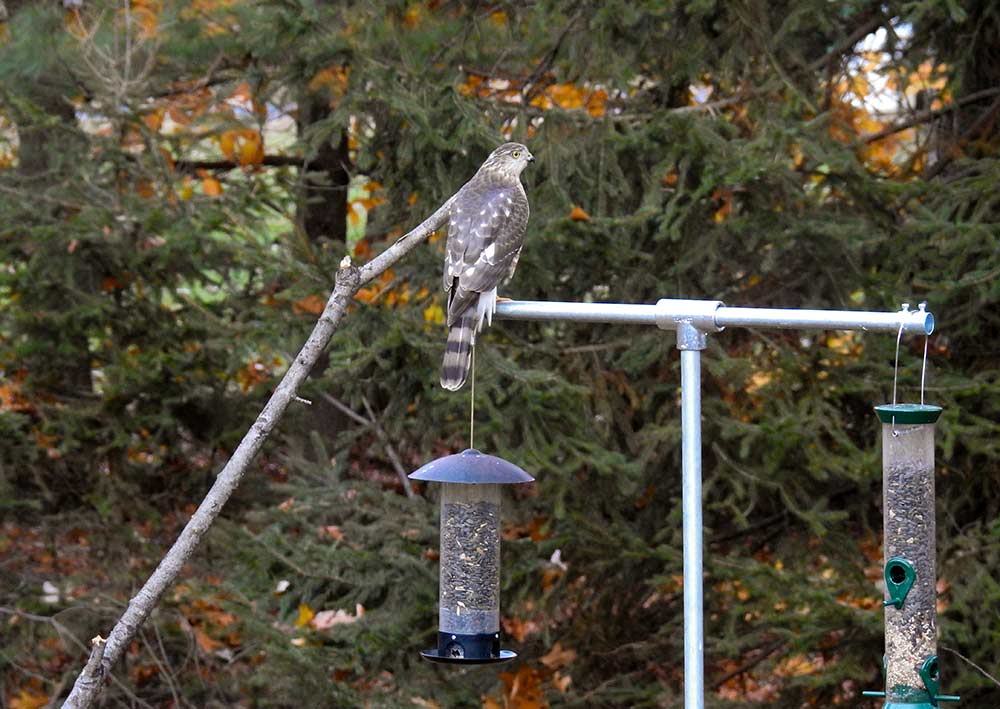 Hawks are famous for being predatory birds and some may even attack small animals like chickens, ducks and even small dogs. Fortunately, there are ways to keep hawks away from your backyard without hurting these raptors.

People living in hawk habitats may be concerned about these large birds attacking their pets or farm animals. Although there are stories that this happens, it is quite uncommon for hawks to do this.

Most hawk species prefer smaller animals like rodents, frogs and snakes. Also, most housing areas are unsuitable for their hunting techniques.

Still, the stories come from somewhere. Read on if you think that your animals are at risk of a hawk attack and find out how to protect them.

Where Do Hawks Hunt?

Hawk habitats differ per species but there are a few generalizations that we can make. Most hawks prefer hunting on wide open land. This lets them hover from far above and dive down to their prey mostly unobstructed.

Most species also like to perch on tall trees and scan the area for prey from there. However, hawks are less likely to go hunting in very dense forests.

Hawks go hunting where their prey are most abundant so their diet also determines their hunting ground. The species that eat frogs may live closer to bodies of water, accipiters that eat small birds like areas with more growth and those that eat squirrels and other rodents live near the woodlands.

It is rare to find a hawk hunting in your backyard because the presence of humans keeps them away. If you do see a hawk circling then there may be a few specific features in your yard that attracts them.

How to Scare Hawks Away from Your Backyard

Hawks won’t attack when they see their natural enemies or other larger animals in the yard. A large owl statue or scarecrow are easy additions to your yard that keeps hawks away.

However, hawks are clever birds and they will realize that these features are inanimate after a few days. The solution is moving them to a different spot in the yard every once in a while, this suggests movement.

Shiny reflective objects are disorienting to many birds, including hawks. The object can be something as simple as a CD hanging on a string on a tree limb. Unfortunately, this keeps more than just hawks away from your backyard.

Certain animal stores and horticulture stores sell electronic devices that send out a hawk’s distress signal. Hearing this sound signals to hawks that there is a predator in the area and should scare them away.

Hawks scan the area for prey before attacking. They do this while perching on tall trees which gives them the perfect vantage point.

Pruning the tall trees in your yard makes the area less attractive for hunting. You can also make the hunt more difficult by planting lots of shrubbery and bushes where smaller birds can hide out.

5. Don’t Place Bird Feeders in Open Spaces or Near Windows

Bird feeders are great for attracting hummingbirds but they also attract hawks. Many people choose to place bird feeders in a open space which unfortunately makes it easier for hawks to dive down on their prey.

Nearby windows are also dangerous locations because the bird might become disoriented and fly into the window in an attempt to escape the hawk. The safest way to install bird feeders is surrounded by an enclosure that hawks can’t fly into.

How to Keep Hawks Away from Chickens

Chickens are relatively small animals, don’t weigh much and can’t fly very far. This is why they are a relatively easy prey for hawks.

The best way to protect chickens from hawks is to keep them under a cover at all times. For example, build a run or an extension for the chicken coop so they can roam around safely.

Roosters are also good bodyguards for chickens. They are naturally protective creatures and will create quite a stir when sensing the danger of a hawk. The loud noise should be enough to scare hawks away.

How to Keep Hawks Away from Ducks

Most of the protective measures that apply to chickens also apply to ducks. Providing them with covered roaming space, covering their feeding area and keeping larger animals around are all good options.

Since ducks spend a lot of their time in the water it is a good idea to provide a covering for your pond. Placing lots of shrubs and other dense vegetation around the pond will also provide your ducks with a hiding space.

If it is at all possible to keep the ducks within coops, do so. The safest time to let them out is after dusk and during the hottest hours of the afternoon. This is because hawks generally only hunt at dawn and dusk.

A final option is getting more ducks. Hawks like to single out their prey because they don’t want to get attacked themselves. Seeing lots of animals in a small areas makes the prey less attractive.

How to Keep Hawks Away from Small Dogs and Cats

Technically, it is possible for hawks to attack small dogs and cats. Hawks are comfortable with attacking animals that weigh up to 60 pounds and quite a few cats and dog species fall within that weight category.

If you live in area with many hawks, be aware of your pets going outside. The safest option is only letting them outside under your personal supervision. This is because the big size of humans scares away hawks. Having a larger dog around works in the same way.

Another option is placing shiny reflective objects in your backyard which are disorienting to hawks. There are also noise-making devices that scare the predators away.

Pruning trees will keep hawks from perching in your backyard. If you prefer to keep your trees dense, install bird spikes in them. These make it uncomfortable for hawks to perch.

Nowadays there are raptor-proof dog vests. These are dog vests for small dogs that make it extremely difficult for hawks to claw through. Hawks sit on top of their prey and kill their prey using their claws, not their beak. If they can’t sink their claws into the your dog they will likely quickly give up.

How to Keep Hawks Away from Koi Ponds

You may have seen a hawk near you koi pond but it is not the fish that they are after. Hawks have a very varied diet but almost none of the species eat fish.

So, seeing a hawk circling your pond is no cause for alarm. They are most likely after other prey that live near bodies of water such as frogs, lizards, snakes and other smaller birds.

In fact, having a hawk near your backyard might even offer extra protection for your koi fish. Some of the animals that do eat fish, like snakes, rats and racoons for example, might be scared off by the presence of a hawk.

Hawks are rarely a threat for koi and other fish but if you want to stay on the safe side, place netting over the pond. The netting protects the fish from all kinds of predators, not just hawks.

Hawks are a protected species which means that it is illegal to harm them or kill them in the United States. This is by decree of the Migratory Birds Treaty Act which applies to all raptors.

Thus, the only way to keep your small animals safe from hawk attack is through taking preventative measures. All the measures that we have mentioned above won’t harm hawks, it simply makes your backyard or farm property less attractive for hawks.

If taking these precautions prove to be insufficient, contact your local game and fish authority. They will inform you what other measures you can legally take to protect your pets or farm animals.