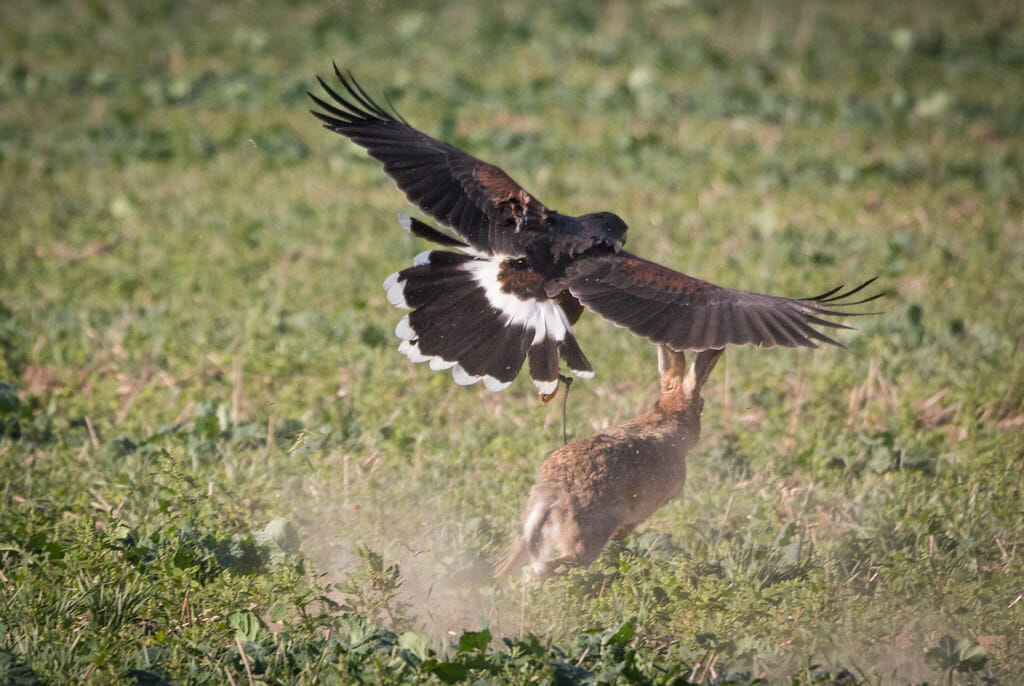 Hawks, being diurnal birds, only hunt during the day. The reason why many believe that hawks hunt at night is because some prefer hunting around dusk.

Technically, dusk is not nighttime yet since there is still some sunlight seeping through. As soon as it gets dark, hawks retreat to their nest to rest for the night.

Read on and learn more about the hunting habits of hawks and other misconceptions around this majestic predatory bird.

Do Hawks Hunt at Night or Day?

It is a common misconception that hawks hunt at night. Hawks are diurnal animals meaning that they are active during the day, not after sunset.

The reason why these are mainly daytime birds is their extra sharp vision. Hawks have an incredibly precise eyesight, as much as 8 times sharper vision than humans.

They rely heavily on their sight when hunting so hunting in the dark just isn’t possible. Yet, many people claim to have seen hawks hunt at night. How is that possible?

Certain species of hawks, specifically the red-tailed hawk, prefer hunting around dusk. Unlike themselves, much of their prey are nocturnal animals that don’t come out of their shelters until dusk.

So, going hunting around dusk provides the hawk with a greater choice of prey. However, that is not the only reason red-tailed hawks hunt in the early evening.

The shadows and lesser light conditions at dusk also work in the hawk’s favor. Their movements are less detectable in dark conditions which makes it easier for them to sneak up on their prey.

The Common Nighthawk – Not Actually a Nocturnal Hawk 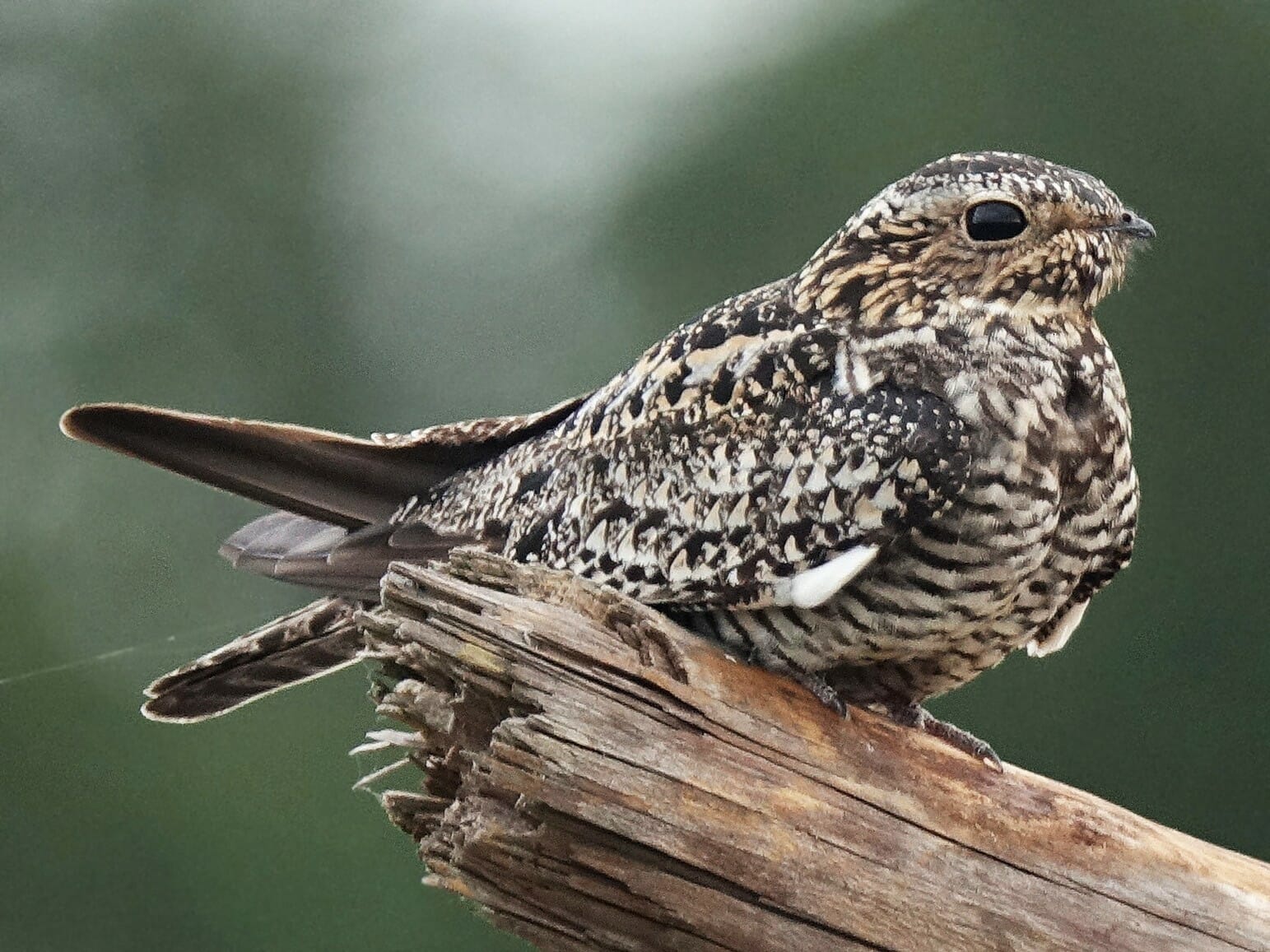 In the United States, there is an often seen bird species called the common nighthawk. Although its name suggests that it is a hawk that is active at night, this is not the case.

The common nighthawk is an excellent example of a misnomer. This bird species is neither a hawk nor fully nocturnal.

Like actual hawks, this much smaller bird goes hunting at dusk but for very different prey. The common nighthawks eats aerial insects which are more active at dusk and dawn. Hence their preferred hunting time.

How Do Hawks Hunt – in Groups or in Pairs?

Hawks are excellent hunters thanks to their gliding ability, razor sharp sight and extremely sharp talons. These deathly tools makes it easy for them to catch relatively large prey, no help needed.

Since they are solitary animals, hawks don’t hunt in groups or pairs. In fact, most of their life is spent alone with the exception of mating season.

The only time you are likely to see hawks in pairs or larger groups is during the mating or migrating season. However, even during this period they go off on their own in search of food.

Hawks glide almost motionless through the air in search of their prey. They do this at relatively high altitudes to remain undetected by their prey. Thanks to their incredible eyesight, they can spot their prey from far away.

Besides gliding in the air, hawks also scan the area for prey from trees. They prefer perching in tall trees, waiting for prey to come out of hiding.

Once it spots a potential meal, the hawk dives down quickly and quietly, there is a myth they screech when attacking. Unlike many other bird species that use their beak, the hawk attacks with their talons.

How they use their talons depends on the size of the prey. With smaller animals like mice, squirrels and small birds, they wrap their talons around the prey and tighten their grip to suffocate the animal.

This does not work for larger animals, though. With larger prey like rabbits and other large rodents they rely on the sharpness of their talons.

Hawks have two talons that are longer than the rest. They use these longer talons to claw into their prey repeatedly until it succumbs to its wounds.

The shorter talons are important, too. Hawks sit on top of their prey so that the prey has great difficulty attacking them. Hawks keep their dominant position by digging the shorter talons into the animal, like an anchor. 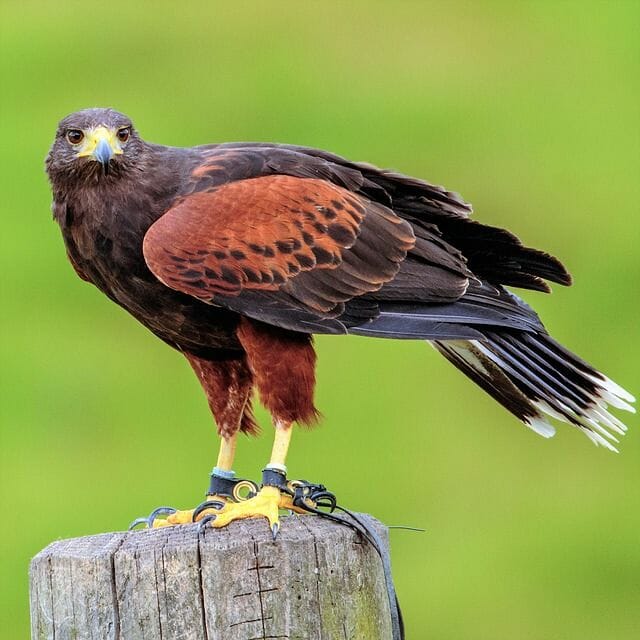 There is one example of a hawk species that do live in groups; the Harris’s Hawk. This raptor species is the most social of the bunch and are often found in pairs or groups of up to seven birds, including their young.

Their hunting methods are very uncharacteristic of hawks since they hunt in groups. They play to the strengths of each bird in the group so that they have the biggest chance of making a kill.

For example, the Harris’s Hawk with the best eyesight leads the flight and makes the first attempt at the prey. If leader’s attempt fails, the second hawk starts their attack and this continues on like a relay race.

Harris’s Hawks also cooperate on the ground. For example, one of the birds might create a distraction in the bushes so the others can creep up on the prey. One of them might also block an entrance of burrowing animals.

What do Hawks Hunt?

Their diet is quite varied with different hawk species having a preference for specific prey. Since these birds don’t shy away from larger animals, there is a common fear of house pets getting attacked by them.

Fortunately, it is actually very rare for a hawk to attack a cat or small dog. Plus, there are plenty of ways to scare a hawk away from your backyard.

Below is a list of potential prey for hawks.

Note that certain hawk species prefer certain prey and not every hawk species will hunt everything on the list. That being said, hawks are opportunistic hunters meaning they will adapt their diet in times of food scarcity or when forced to move to a different habitat.

It is clear that there are several misconceptions about how hawks hunt. These misconceptions are understandable because there is a lot of variation in behaviour among the different species of hawks.

Most hawks hunt for small mammals with dusk and dawn being their preferred hunting time. They rely on their razor sharp eyesight to spot prey and then either suffocate or claw into their prey with their talons.