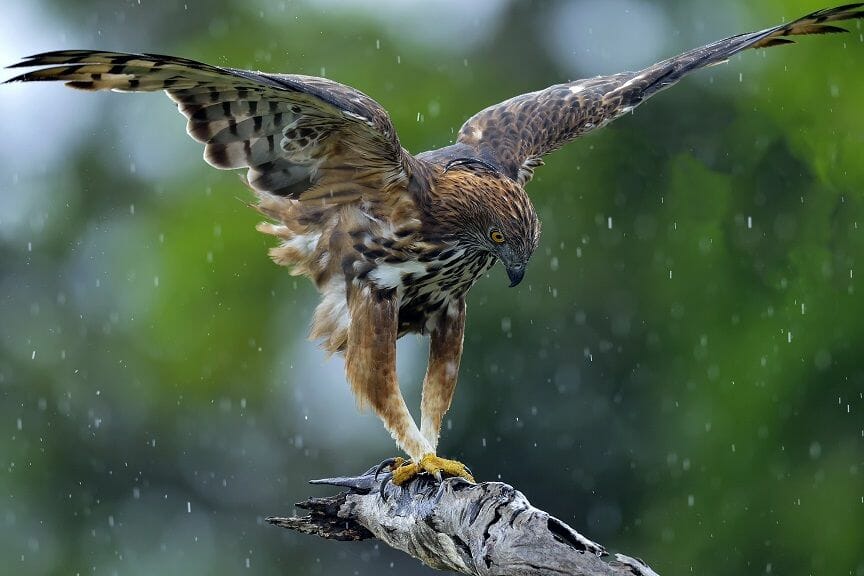 The reason why there is such a wide range in age has to do with environmental threats rather than their biology. Read on to learn which factors have an influence on how old a hawk becomes and the threats at different life stages.

How Long Do Hawks Live in the Wild?

Overall, wild hawks live shorter lives than captive hawks. This is because the wild are more susceptible to natural and man-made threats.

The average wild hawk reaches the age of 12 but there are many potential causes for an earlier death. A large proportion of the population dies within their first year.

Young hawks are particularly at risk because they do not yet have the strength and experience of their parents. This makes them extra vulnerable to other predatory birds but also man-made dangers such as cars and electricity lines.

Another reason why the young might not survive is starvation due to a lack of effective hunting skills. The young only remain in the nest for less than 50 days, after which they have to fend for themselves.

Very few hawk species hunt in groups so they must quickly learn to become self-reliant. Some young hawks may choose to eat roadkill if their hunting skills are not fully developed yet.

This bird species is also notorious for eating chickens. Unfortunately, there are many cases of chicken farmers killing hawks for this reason.

What Is the Average Lifespan of Hawks in Captivity?

In captivity, there are far fewer threats to a hawk. They do not risk flying into moving vehicles, are kept away from power lines, are provided with adequate nutrition and don’t have to fight off any predators.

As a result, hawks that are being properly cared for by humans tend to live for much longer. The average lifespan for a hawk in captivity is 20 years. There are even a few cases of a hawks becoming as old as 30.

The Life Cycle of Hawks

Below is an outline of the different life stages of hawks. This is a general outline and the specific details may differ per species.

Adult female hawks lay between 1 – 5 eggs per mating season. How long it takes for the eggs to hatch depends on the specific species and environmental factors. This can be anywhere from 28 to 48 days.

Born blind, these young birds are completely reliant on their parents for nutrition. Both the male and female hawk go hunting to feed their young. The exact number of days in the fledgling phase differs per species but tends to be between 42 – 50 days.

Hawks are most vulnerable right after they leave the nest because this is when they have to start fending for themselves. This is why there is such a high number of hawks dying in their first year.

The juvenile stage can be considered over once the hawk reaches sexual maturity. Again, there is a wide range – anywhere between 18 to 36 months.

Once a hawk reaches adulthood, their chances of survival exponentially increases. This is because they have gained more experience on possible dangers and have become skilled hunters. Adulthood is the longest stage of their lives.

How Long Do Hawks Stay in One Area?

Hawks are very protective of their territory and do not veer away much. In fact, hawks are known to re-use their nest year after year, unless it suffers too much damage.

Since hawks tend to mate for life, it is highly likely that you see the same male and female hawk in the same nesting area every mating season. The only time you are likely to see a new hawk is if it is a young marking their new territory.

One reason why a hawk may leave an area is if there is not enough food. However, their territory stretches for miles so they might still be in the area even if they are not always visible.

If a formerly natural area goes under construction, the hawk may leave, too. Man-made activity and buildings reduces their chances of catching prey and this remains a concern for wildlife protection agencies.