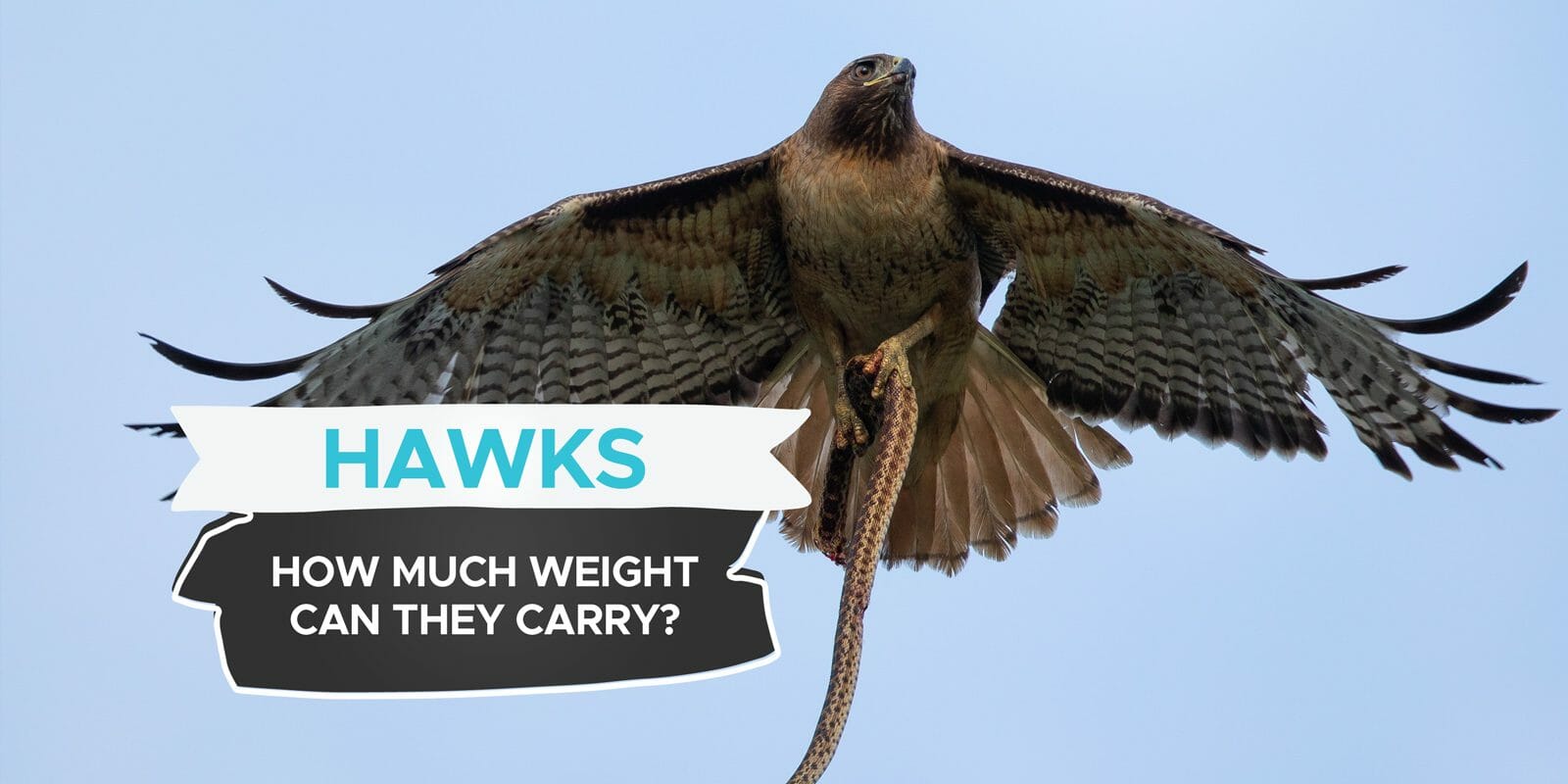 As you know, hawks are magnificent birds of prey and like to feast on small mammals by swooping down from high above and picking up their prey in their large, sharp talons. But you might be wondering about how much weight a hawk can actually carry. Should you be worried about your pets if you see a hawk circling above?

In general, hawks cannot carry more than their own weight. So, the prey that they pick up needs to be lighter than the bird itself for it to be carried away by the hawk. Most hawks, being smaller birds of prey, only weigh around 2 to 4 pounds so it’s unlikely that one of these will pick up your pet.

Most hawks prefer to prey on small mammals like rodents and rabbits. They’re also fond of snakes and other reptiles and they’ll even prey on small birds.

However, a study conducted by the Cornell Lab of Ornithology concluded that larger red-tailed hawks can possibly carry prey that weighs around five pounds. So, that could mean that it’s possible for a hawk to pick up a puppy or kitten or even a very small dog or cat.

There are certain species of hawks that are commonly referred to as “chickenhawks” because they will feast on chickens as part of their diet. However, like great horned owls, hawks such as the cooper’s hawk and the sharp-shinned hawk will more than likely kill the chicken on the ground and start feasting on it rather than taking it away.

The Average Weight Of Different Species Of Hawks

Now that you know that hawks cannot carry something that weighs more than their body weight, let’s put this into perspective by looking at the average weight of many different species of hawks.

As you can see, most hawks weigh less than 3 or 4 pounds so it would be safe to say that they can’t carry anything that weighs more than this.

This is because their wings are simply not strong enough to carry both the hawk and the weight of its prey when that prey is too heavy.

The largest hawk you’re likely to see in North American backyards is the red-tailed hawk which rarely weighs more than 3 pounds. Therefore, it’s unlikely that your pets are going to be in danger of being pick up and carried away by one of these majestic birds.

Red-tailed hawks would much prefer to prey on rodents, snakes and small birds as these are small enough for the raptor to carry easily. Anything larger than this, and the bird is likely to kill it and feast on it while on the ground. 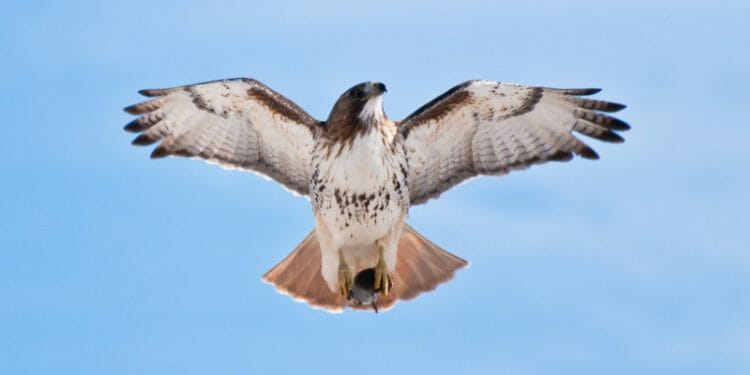 Can A Hawk Carry Away Your Pet?

We’ve adequately ascertained that most backyard pets are quite safe from visiting hawks unless they’re very small or you have pet rabbits or mice that you shouldn’t leave outside unsupervised anyway.

However, it is possible for a large hawk to maim or even kill your pet while it’s on the ground. This is highly unlikely, but it could happen if there’s a shortage of other more suitable prey.

On the other hand, if the hawks are nesting nearby in a tall tree, they may just swoop at your pet because they’re simply protecting their young.

What Should You Do If You Have Very Small Pets And Notice Hawks Around Your Backyard?

It’s been noted that hawks and other birds of prey are more commonly seen in urban and suburban areas due to reduced natural habitats and the increase in people putting up backyard bird feeders.

These feeders attract many small songbirds and, therefore, provide an easy food source for hungry hawks.

If you’re worried about the fact that visiting hawks may cause injury to your pets, it’s important to supervise them while they’re running around in your backyard. Remember that all hawks are protected species under the Migratory Bird Treaty Act and it’s against the law to harm them.

If the hawk sees you, it’s unlikely to come too close.

If you like taking your small dog for a walk in natural surroundings, you can easily get a talon-proof vest that doesn’t allow the pet to be picked in the rare instances that this may be likely. Also, remember to try and stay away from nesting sites to avoid being swooped by over protective hawks, take a look at our article on other ways to keep hawks away. 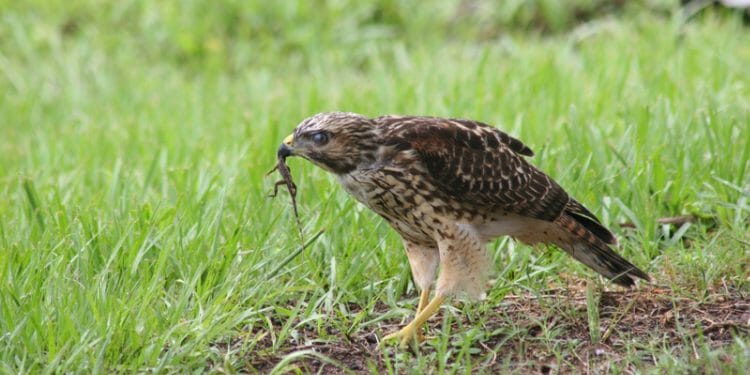 Generally no, because hawks cannot carry more than their own body weight.

How large a cat can a hawk pick up?

Hawks will not try and take large cats. Generally, the cat would have to be under 5 pounds for a hawk to be able to pick it up and carry it away.

Can a hawk lift a full grown chicken?

If the chicken only weighs a couple of pounds, a hawk can easily pick it up. Some hawks will attempt to pick up larger chickens but they won’t be able to carry them very far.

Can a hawk pick up a rabbit?

Generally, larger hawks such as the red-tailed hawk are able to pick up rabbits. In fact, these birds of prey feed on many small mammals such as rodents and rabbits.

This means that it is possible for a hawk to pick up and carry a very small dog or cat but this is highly unlikely. These majestic birds of prey would much rather feed on small mammals such as rodents and rabbits as well as snakes, other reptiles and small birds.