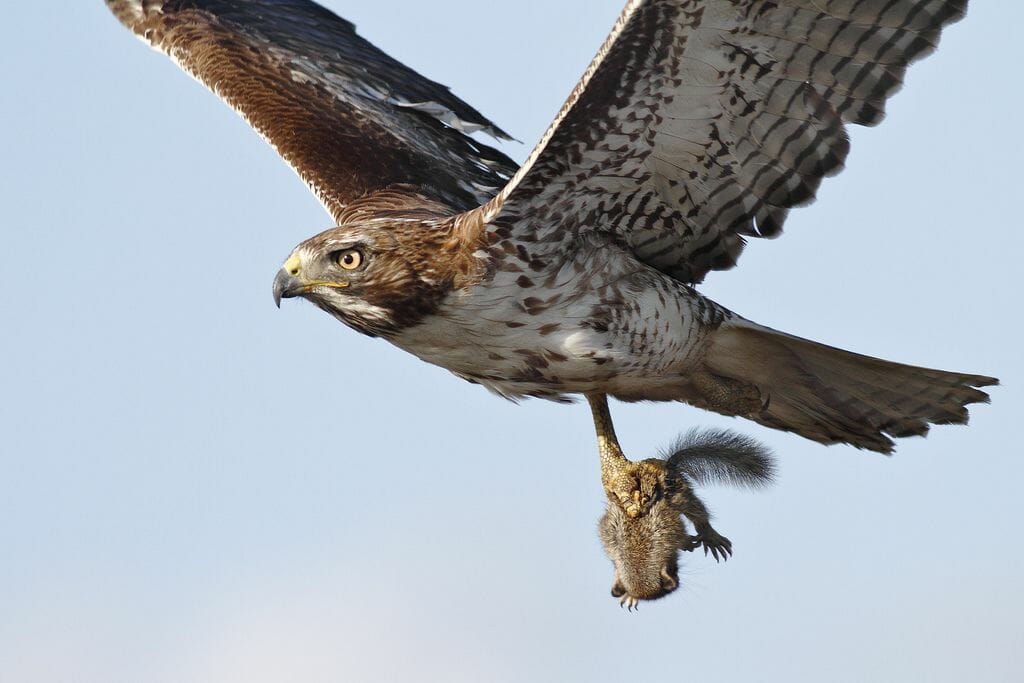 Hawks are very skilled hunters with a varied carnivorous diet. Depending on the specific hawk species and habitat they will eat anything from small aerial insects to large rodents and amphibians.

These raptors are opportunistic hunters which means that they will eat whatever is readily available. Thus, their diet changes depending on the season and their surroundings.

There are stories of hawks attacking farm animals like chickens and ducks and even smaller pets like cats and small dogs. Although farm animals are at risk when roaming near hawk habitats, it is very rare for pets to get attacked.

Read on to learn more about what hawks eat and how their diet differs per species and habitat.

What Do Hawks Eat in the Wild?

Wild hawks have a very varied diet. Being opportunistic raptors they eat whatever is the easiest to hunt in that particular area. They eat the entire prey, including the bones.

In other words, hawks don’t have a particularly strict diet. Their diet changes depending on their surrounding. For example, they will eat more rodents when living in forested areas and eat more amphibians when living near bodies of water.

On some occasions, hawks have even been seen eating roadkill. These are usually the younger hawks that are still developing their hunting skills.

Their diets also change with the season. During the spring, when it is mating season for many birds, they may go hunting for smaller birds.

So, what do hawks eat in the winter when many animals go into hibernation? When food is scarce, hawks become less picky and eat whatever creature passes by. Hawk winter diets usually consists of small rodents like voles but they will also eat carrion.

Let’s take a look at what hawks eat and the most common prey for each species.

Hawks do eat birds that are smaller than them. Certain species of hawks are accipiters which means that other birds make up a large proportion of their diet.

Reptiles and amphibians are common prey for hawks, including snakes. The type of hawks that hunt snakes are the kind that prefer nesting in non-forested areas.

Examples of hawks that eat snakes are the Red-Shouldered Hawk and Broad-Winged Hawks. Although, their does not rely exclusively on snakes. They also hunt small mammals and even some aquatic animals like crayfish and crabs.

Almost every type of hawk hunts for squirrels. They are particularly popular among those that hunt on open land and near spacious trees.

Swainson’s Hawks often hunt for squirrels in the mating season but their diet incorporates more aerial insects after mating season. This is because they are opportunistic hunters and go for whatever is plentiful and easy for them to catch.

Technically, larger hawk species and hawks that hunt in groups are capable of attacking cats and other smaller pets. As mentioned, they can capture prey that is as heavy as 60 pounds.

There are ways to keep your pets safe from hawk attacks. Most importantly, supervise your pets whenever they are outdoors and under open air. Hawks won’t attack with humans around because we are too large an enemy for them.

They also don’t attack when there is a group of pets. Hawks avoid attacking groups of larger animals because they are afraid of being attacked themselves.

What Do Baby Hawks Eat?

Hawks are a protected species and the young are particularly vulnerable. Did you find a fallen fledling or an abandoned nest? Call up the local game and fish authorities, they will tell you what to do with the baby hawks.

Hawks are carnivores from the moment that they hatch. This means that there is no nursing period. So, if you find an abandoned baby hawk do not feed it milk or bread.

Newly hatched hawks eat smaller animals like insects, lizards and even crayfish or crabs. The best thing you can feed them is tiny pieces of raw meat. Feed them using chopsticks to mimic a hawks beak. This also keeps you at a safe distance from their dangerously sharp talons.

Hawks rarely drink water since they get enough liquids from their prey’s blood. Keep the baby hawk hydrated with just a few drops of water after feeding.

What Do Hawks Eat in the City?

Hawks are a very rare sight in cities. Such busy areas simply aren’t the ideal hunting ground for them.

These raptors prefer an area where they have a clear line of sight with minimal obstructions between them and their prey. Tall buildings, moving vehicles and lots of humans does not fit that description.

The hawks that do live in the cities rely on smaller birds and rodents as their main food supply. This includes pigeons, mice, rats and squirrels.

How to Attract Hawks to Your Backyard

Many people fear seeing a hawk in their backyard because of the stories of hawks attacking cats and small dogs. Although they are capable of attacking pets, it is generally uncommon.

Even though they have a bad reputation, attracting hawks to your backyard actually has a few benefits. Since their diets mostly consists of rodents, they are great for keeping away mice, rats and even larger pests like raccoons.

Hawks are especially useful when you have koi fish or other fish in a pond. This is because hawks do not dive into water and do not eat fish. The good news is that they will hunt the snakes and mammals that do eat fish.

Attracting hawks to your backyard requires enough food sources and shelter. They like tall trees with large steady branches for perching and scanning for prey.

As you can tell, hawks eat a wide variety of prey as long as it is a carnivorous meal. Their diet is strongly influenced by their surroundings and even the seasons.

Certain hawks have specialized hunting skills which also influences their diets. This is why certain hawks species have more amphibians in their diets while others are accipiters.

Overall these are opportunistic hunters, capable of killing both small and large prey or eating carrion when food is scarce.