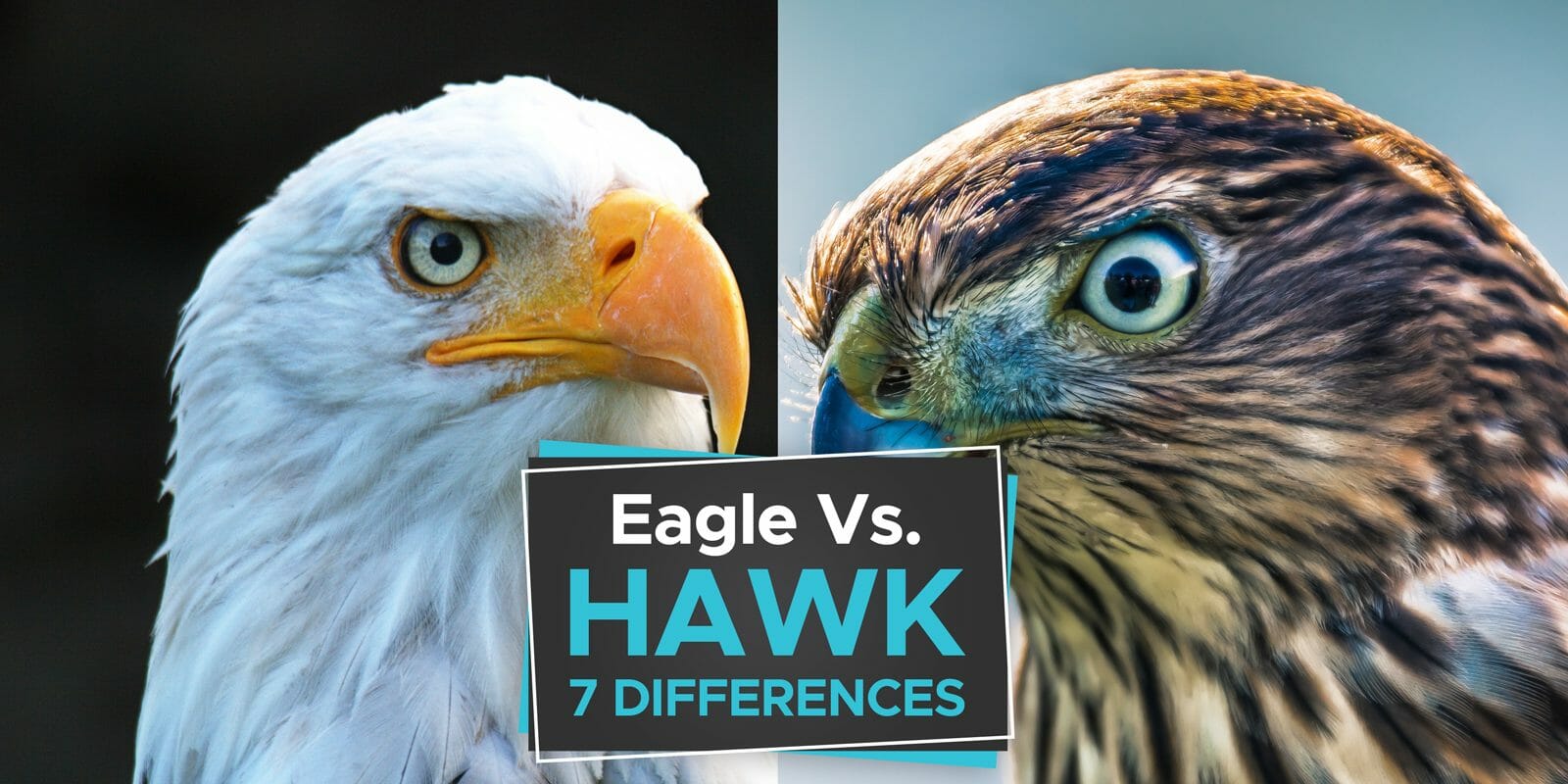 When you’re out bird watching and you see a raptor in the skies above, it can sometimes be difficult to determine whether you’re looking at a hawk or an eagle. So, how do you tell the difference?

To help you out, there are around 7 key differences between hawks and eagles that you should familiarize yourself with. These include the size of the bird, their wingspan, the shape of their wings and their tail and their build.

Let’s discuss these differences in more detail. But first, let’s look at the main characteristics of each species.

Main Characteristics Of Hawks vs Eagles

Here’s a chart that lists some of the main characteristics of hawks vs eagles.

In general, eagles are much larger than hawks. There are some exceptions but this is the general rule. Here’s a quick chart to explain:

As you can see, eagles are not only larger than most hawks but they also weigh more. The reason that eagles are so large is that their size helps them to survive in difficult environments and also helps them to be able to lift larger prey.

The smaller size of the hawk allows these birds to fly faster and makes chasing smaller, ground dwelling prey a lot easier. 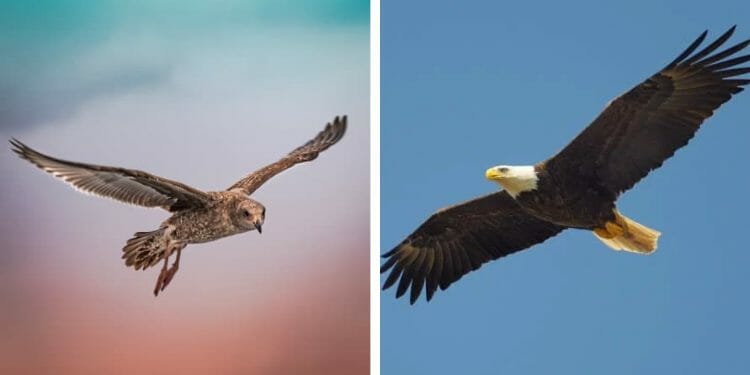 Eagles, because they’re larger and heavier, also have a larger wingspan. They need this to be able support their own body weight. Here’s a quick chart to show you the differences:

Another key difference between eagles and hawks is that the wings of a hawk are generally more rounded. On the other hand, eagles tend to have straighter wings.

Both species use thermals to help them glide high up in the sky. But, while hawks will generally hold their wings in a shallow v-shape, eagles tend to hold their wings flat or very slightly raised.

As you can see, the extra strength allows eagles to catch and carry off much larger and heavier prey than hawks can.

In general, eagles will have a much more muscular build than hawks who are generally more slender and stocky. Eagles also have a hooked beak and curved talons while hawks have a curved beak and very sharp talons.

Another distinctive difference is that eagles will usually have a yellow or light colored beak while hawks have a dark-colored beak instead.

Both hawks and eagles share similar diets. This includes many small mammals such as rabbits, mice, rats and squirrels. In addition, both species will prey on small songbirds such as woodpeckers. Also, some species of hawks and eagles will hunt small reptiles such as lizards and snakes while others prefer a diet of fish.

The main difference in the diet of hawks and eagles is the size of the prey. Because eagles are larger and stronger, they are able to prey on much larger mammals and birds than hawks can. For example, some eagles are powerful enough to take down a small deer or even a goat, while others will often prey on large waterbirds such as ducks and geese.

These larger birds and mammals are just too heavy and cumbersome for hawks to bother with.

So, when you hear a loud and hoarse sounding screech, it’s more than likely a hawk that is circling above. 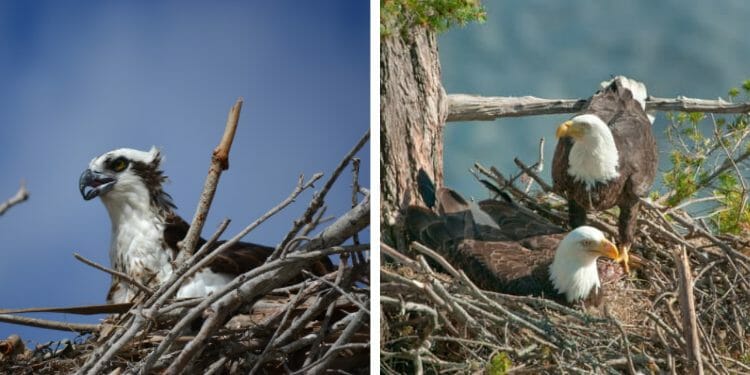 In general, most hawk species will lay between 2 to 7 eggs while eagles will generally only lay 1 to 2 eggs at a time. This is because of the size difference in the young. Young eagles are far larger than hawks and, therefore, it’s difficult to fit more than one or two into the same nest.

Similarities Between Hawks and Eagles

Now that you know the basic differences between hawks and eagles, here are a collection of similarities that these different species share:

Do hawks have better eyesight than eagles?

Basically, both hawks and eagles have comparative vision.

Is a hawk faster than an eagle?

Even though hawks are smaller than eagles, eagles are still faster than hawks due to their large and powerful wings.

Are hawks more aggressive than eagles?

Eagles are the more powerful of the two species, therefore, they could be considered more aggressive. However, their aggression can really only be witnessed while they’re protecting their young. In general, both eagles and hawks will tend to avoid conflict whenever possible.

Are hawks afraid of eagles?

It has been known that eagles can prey on hawks if they come into contact with them. This means that a hawk will tend to stay well away from the strong and powerful eagle.

Although hawks and eagles are both birds of prey, there are some fundamental differences between the two. The first most obvious difference is the size. Eagles, in general, are much larger than hawks. For this reason, they are also much more powerful and are able to catch and carry off larger prey than the more diminutive hawk.

The other notable differences are that eagles have a larger wingspan. This is necessary for carrying the eagle’s weight and the weight of the prey that it captures. In addition, hawks tend to have different markings on their feathers which eagles tend to lack. Plus, hawks have more rounded wings while eagles tend to have straighter wings that they hold quite flat while in flight.

Another difference is in the way that these birds nest and raise their young. Both species will nest high up in tall trees but eagles will also build their nests on the sides of cliffs. There’s also a difference in the brood size. While most female hawks will lay from 2 to 7 eggs, female eagles will only lay 1 to 2 eggs.

Hopefully, you’ll now have a better understanding of the differences between hawks and eagles and will be able to identify each species more accurately.