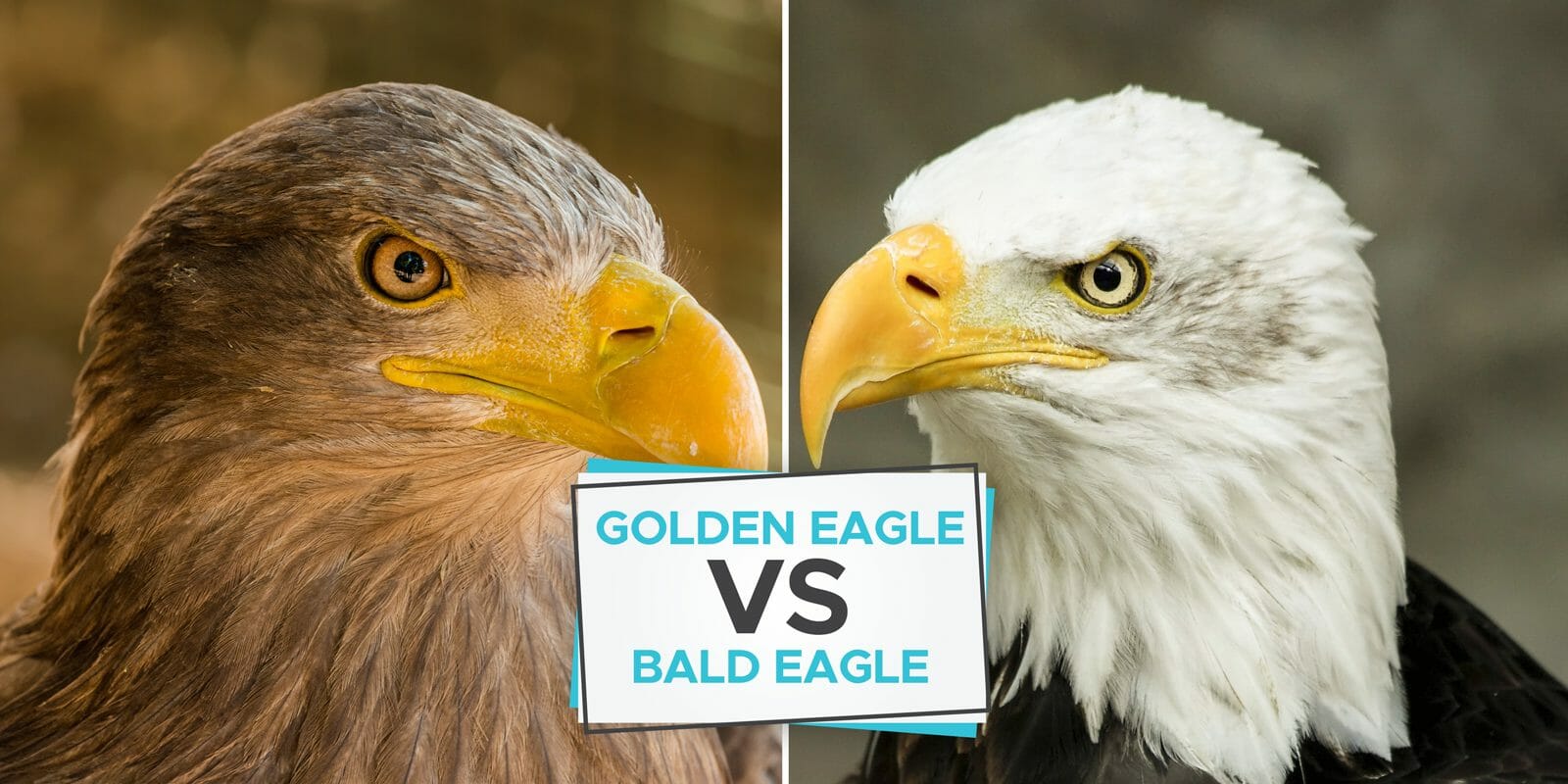 As adult birds it can be quite easy to distinguish a golden eagle from a bald eagle. However, the difficulty arises when you see a juvenile bird that hasn’t fully developed its adult markings. This can take up to 5 years for both species.

Both golden eagles and bald eagles are similar in size. The males of each species measure around 2.5 feet from head to toe and they have a wingspan of 6 to 7 feet. Most adult male eagles weigh more than 10 pounds. Adult female eagles are larger, of course.

Let’s look at the characteristics of each species to help with identifying the differences between these two birds.

The Characteristics Of Golden Eagles

Mature golden eagles have a brown head with gold highlights on the neck and back of the head. The golden eagle’s head is smaller than that of the bald eagle and it has a black, hooked beak.

However, their head coloring changes very little as they mature into adulthood.

Interesting Fact
Golden eagles are the second fastest divers in the world surpassed only by the speed of the peregrine falcon.

The Characteristics Of Bald Eagles

The bald eagle has a yellow beak that is hooked and quite large. It also has a large head. Plus, there are no feathers on the legs of the bald eagle.

As juvenile bald eagles mature, their plumage changes quite considerably. At one and half years, there is considerably more white scattered throughout the feathers on the head but especially around the throat. The beak also starts to lighten to gray.

At two and a half years, there is a lot more white on both the top of the head and around the throat. At this stage the head of the bird looks very speckled. Similarly, the beak is now a very light gray in color.

Interesting Fact
In the early 1970s, the bald eagle was actually on the brink of extinction because the use of DDT by farmers was widespread. However, today, the population appears to be quite stable and even increasing due to extensive conservation measures. 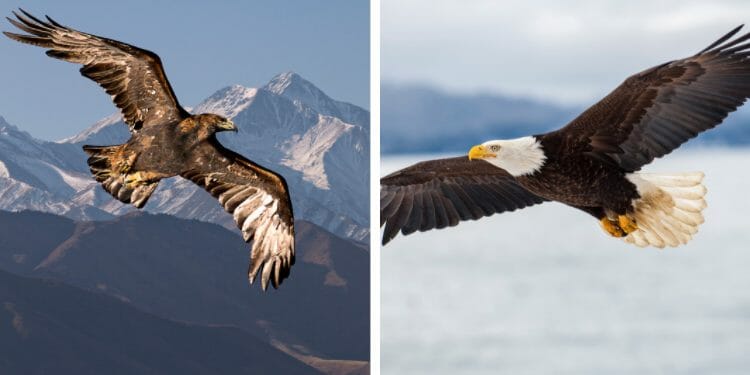 If you see both an adult bald eagle and an adult golden eagle, it’s very easy to tell the difference just by looking at their coloring. The bald eagle has a white head and tail and the golden eagle’s are brown.

Another distinct difference between the two species is that a golden eagle’s feathers go all the way down to its feet whereas a bald eagle has no feathers on its legs.

You’ll also notice a slight difference when both birds are in full flight with their wings spread out. The golden eagle’s wings will be upturned slightly and form a slight V shape. Conversely, the bald eagle flies with its wings flat and straight. 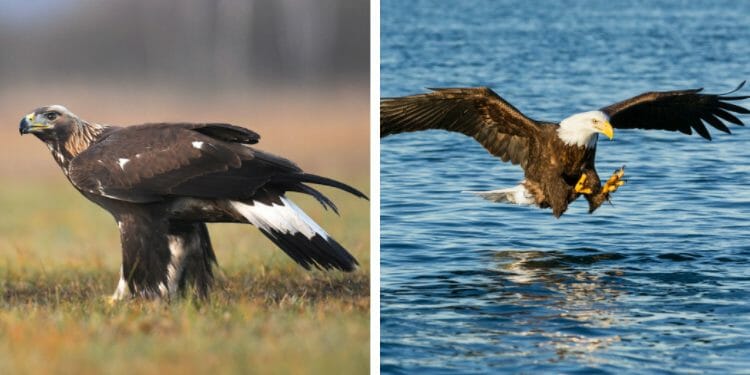 The Difference Between Juvenile Birds

As mentioned, a juvenile bald eagle can appear very similar to a juvenile golden eagle. Therefore, you have to look a little more carefully to spot the differences.

A juvenile golden eagle has a distinctive white band on its wings and tail. On the other hand, juvenile bald eagles have haphazard splashes of white on their feathers. This is easier to spot when both birds are in flight. An immature golden eagle will have a stripe or band of white at the base of the tail as well as a similar band on the underside of the wings. With a bald eagle, you’ll only see indistinct splashes of white. This gives the appearance of mottling.

If you’re still not sure which bird you’re looking at, look at the legs. If the bird is a golden eagle, it will look like it’s wearing boots as the legs are covered with feathers. On the other hand, a bald eagle has bald legs and you can easily see the talons.

Golden eagles primarily feed on small animals such as rabbits, hares and squirrels. They build their nests on mountain cliff sides, in escarpments and close to grasslands and forest areas.

Bald eagles tend to prefer nesting sites near lakes, rivers and streams. This is because they prefer to eat fish. However, bald eagles will also feast on small mammals as well as reptiles, crabs and other amphibians.

Golden eagles are also more solitary than bald eagles. Therefore, they’re more often seen alone or in pairs. Conversely, bald eagles can be seen in larger groups when there is an ample supply of food nearby.

Which is bigger, a golden eagle or bald eagle?

Bald eagles are slightly larger when measuring height and wingspan. However, both species weigh about the same.

Do bald eagles ever mate with golden eagles?

There is no scientific evidence to say that a bald eagle has ever mated with a golden eagle.

Do eagles mate for life?

The bald eagle does mate for life unless one of the pair dies.

Why are golden eagles special?

The golden eagle is the largest bird of prey in north America. It is also the national bird of Mexico.

Telling the difference between a juvenile bald eagle and an immature golden eagle can be a little trickier. One of the clearest differences is the white markings on the underside of the tail and wings. A golden eagle has a distinct stripe or band of white while a bald eagle just has splatters of white.

So, next time you’re out eagle-spotting, see if you can use these characteristics to determine which species you’re looking at.