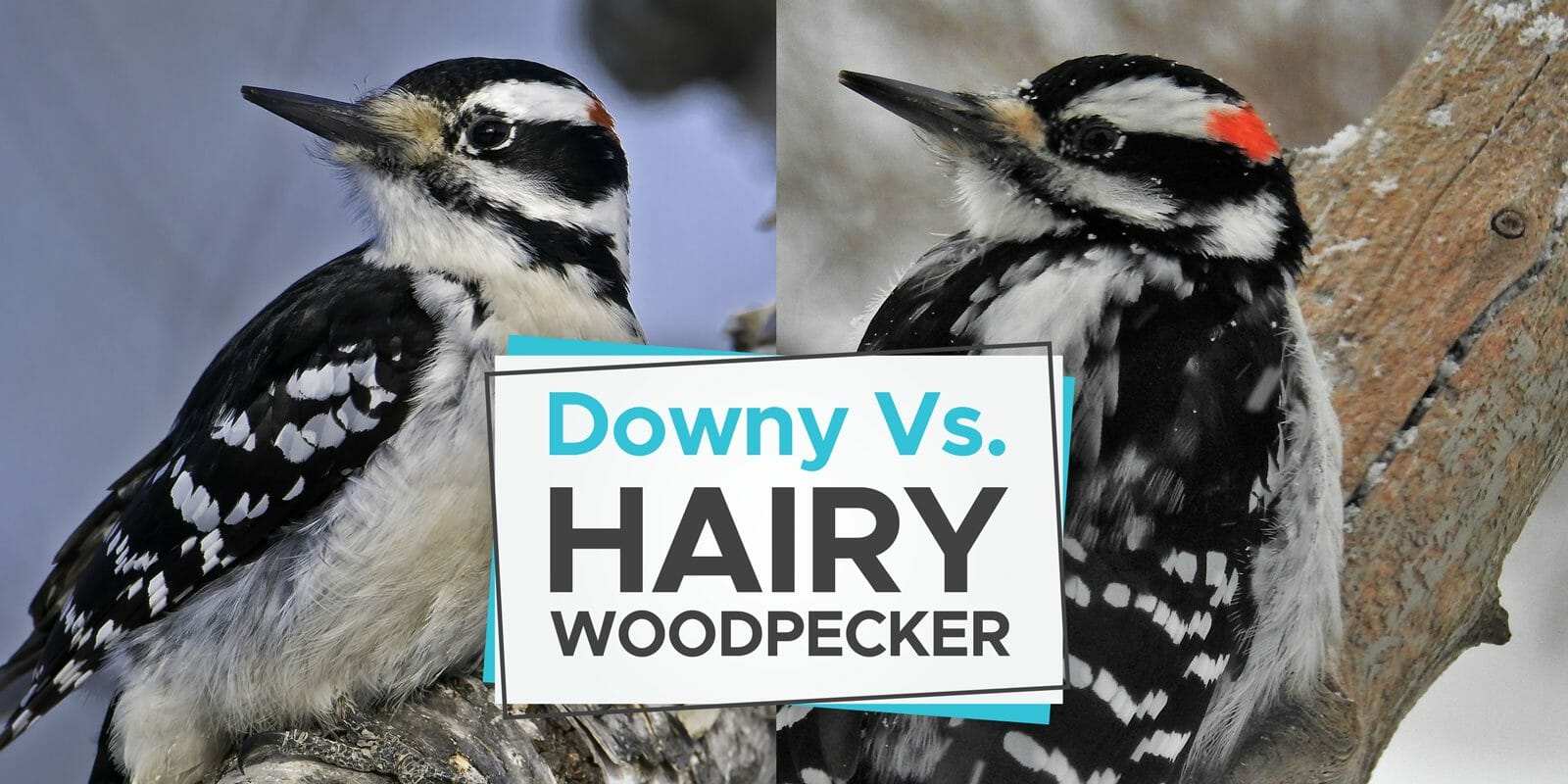 Downy woodpeckers look very similar to hairy woodpeckers, so it can be difficult to tell them apart. However, there are some differences between the two species which we’ll discuss in more detail in order to make identification easier for you.

In a nutshell, hairy woodpeckers are larger than their downy cousins. However, this can be hard to see unless you’re looking at both species side by side. Hairy woodpeckers also have longer beaks while the downy woodpecker has a short, stubby beak. Their individual calls are also quite different.

Here’s a more detailed look at the differences between downy and hairy woodpeckers.

To put this into an easier perspective, a hairy woodpecker is around the same size as a robin while a downy woodpecker can be compared in size to a common house sparrow.

Here’s a quick chart to demonstrate the size differences:

Another distinct difference between the two species is that the hairy woodpecker has a much longer beak. It’s about as long as the bird’s head. It’s also thicker and more dagger-like to look at.

On the other hand, the downy woodpecker has a much shorter and stubbier beak. Its length is only about a third of the length of its head.

Looking at the length of the bird’s beak is probably one of the easiest ways to distinguish one species from the other. 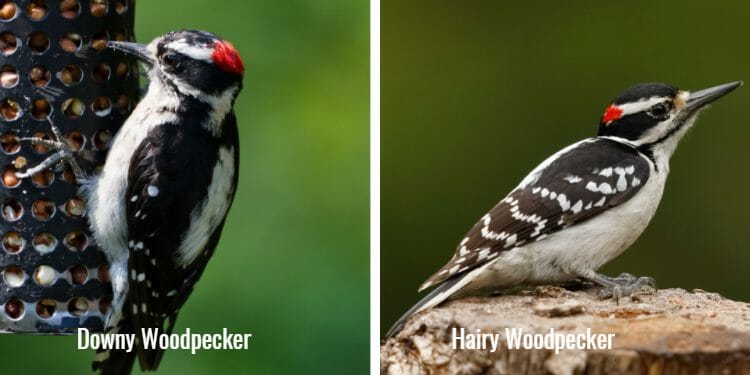 Another way to tell these two birds apart is by listening to their calls as they are very different.

The hairy woodpecker makes a sharp “peek” or “cheep” type call. This sounds very similar to the sound made by a dog’s squeaky toy. These birds also produce a sharp and loud rattle in the same pitch, that sounds like the motor of a sewing machine or a muffled jack hammer.

On the other hand, the downy woodpecker makes a short and friendly “pik” or “chip” sound. It also can emit a high-pitched “whinny” that descends in tone and has a rattle at the end.

Look At The Feathers And Markings

You might also find that the red patch on the back of the head is split into two on the hairy woodpecker. The downy woodpecker has the same red patch but it is not split.

Another very slight difference in appearance is the markings on the shoulder. Hairy woodpeckers have a black stripe in the shape of a comma on their shoulders while downy woodpeckers just have a black patch that blends into the black feathers on their back.

These might all be quite subtle differences but when you add them together, they can help you identify each species more easily.

Both the downy and hairy woodpeckers have different habitat preferences although you might find both of them at your woodpecker feeders.

The downy woodpecker prefers open forests with deciduous trees and will spend most of its time along the brushy edges of these forests. These smaller birds are also known to spend their time in suburban areas and are likely to frequent gardens, parks and orchards.

Conversely, the hairy woodpecker likes to spend his time in tall forests filled with both deciduous and coniferous trees. This bird prefers dense woodlands but can also sometimes venture into suburban areas. Therefore, you might find one of these birds frequenting your backyard feeder if there’s plenty of food available.

However, because downy woodpeckers are more frequent visitors to suburban areas, you’re more likely to spot one of these birds at your feeders.

Another clue as to whether you have a downy or hairy woodpecker nearby is to find their nesting cavity. A look at the cavity opening will tell you which species is nesting there. Downy woodpeckers will have a small, round opening in the cavity while hairy woodpeckers are likely to nest in a cavity that is larger and has an oval opening. 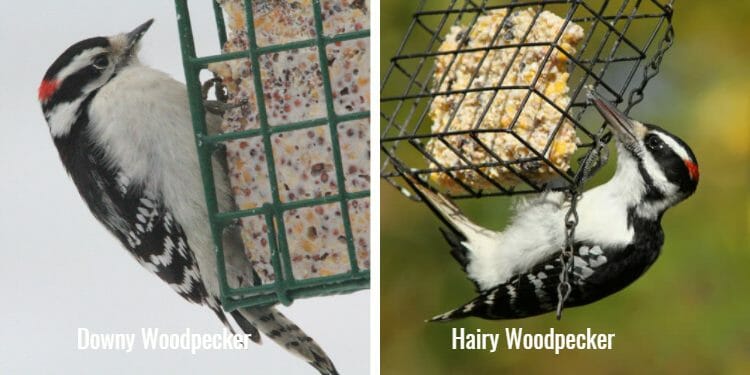 There are also slight differences in the preferred diet of these birds.

Downy woodpeckers mainly feed on insects such as tent caterpillars, corn earworms, apple borers and bark beetles. That’s why they can often be found in orchards. To add some variety to their diet, they’ll also feast on acorns, berries and grains.

Hairy woodpeckers have a similar diet. They love feasting on bark beetles, especially the larvae. They also consume ants, caterpillars, spiders, wasps, bees and millipedes. One of their favorite titbits are the pupae inside moth cocoons.

You’ll also find flocks of hairy woodpeckers in forests that have been burned. This is because they love to feast on the beetles that have been displaced by the burned trees.

If you watch these birds closely, you’ll most likely spot some behavioral differences between the two species.

Downy woodpeckers are quite social and curious birds. They often travel in mixed flocks with other species such as titmice and chickadees. You’ll also find them clinging to small, thin branches and even weed stalks as they feed.

On the other hand, hairy woodpeckers are quite shy birds and tend to be solitary. They are much more likely to fly away if you get too close. Because of their larger size and heavier weight, you’re more likely to see them clinging to thicker, more substantial branches as well as tree trunks. 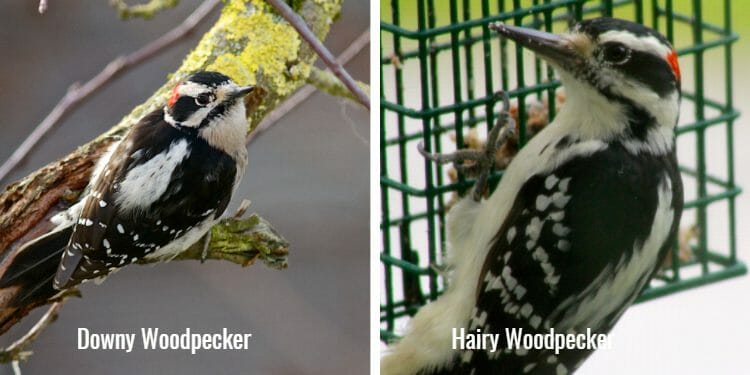 Similarities Between Downy And Hairy Woodpeckers

Now that we’ve looked at the major differences between the two birds, let’s look at their similarities.

Attracting these birds to your backyard feeders is not that difficult if you provide them with the food that they love.

It’s no secret that woodpeckers love suet. You can serve this in a purposely-designed feeder or hang suet cakes in mesh baskets. It’s best to hang these on the branches of some trees in your yard.

Other favorite foods that will encourage woodpeckers to flock to your yard include sunflower seeds and peanuts. These foods can be served in any type of feeder that has a perch or similar structure for the birds to cling to.

If you have a dead tree in your yard, resist the urge to remove it if it doesn’t pose a safety hazard. This will definitely attract these delightful woodpeckers to your yard.

At first glance, it’s quite difficult to tell downy and hairy woodpeckers apart. They both have black and white feathers and do look quite similar in appearance. However, your first clue to a proper identification is the size of the bird. Hairy woodpeckers are larger and heavier than their downy cousins.

Listening carefully to their calls will also help you to identify which bird you’re looking at.