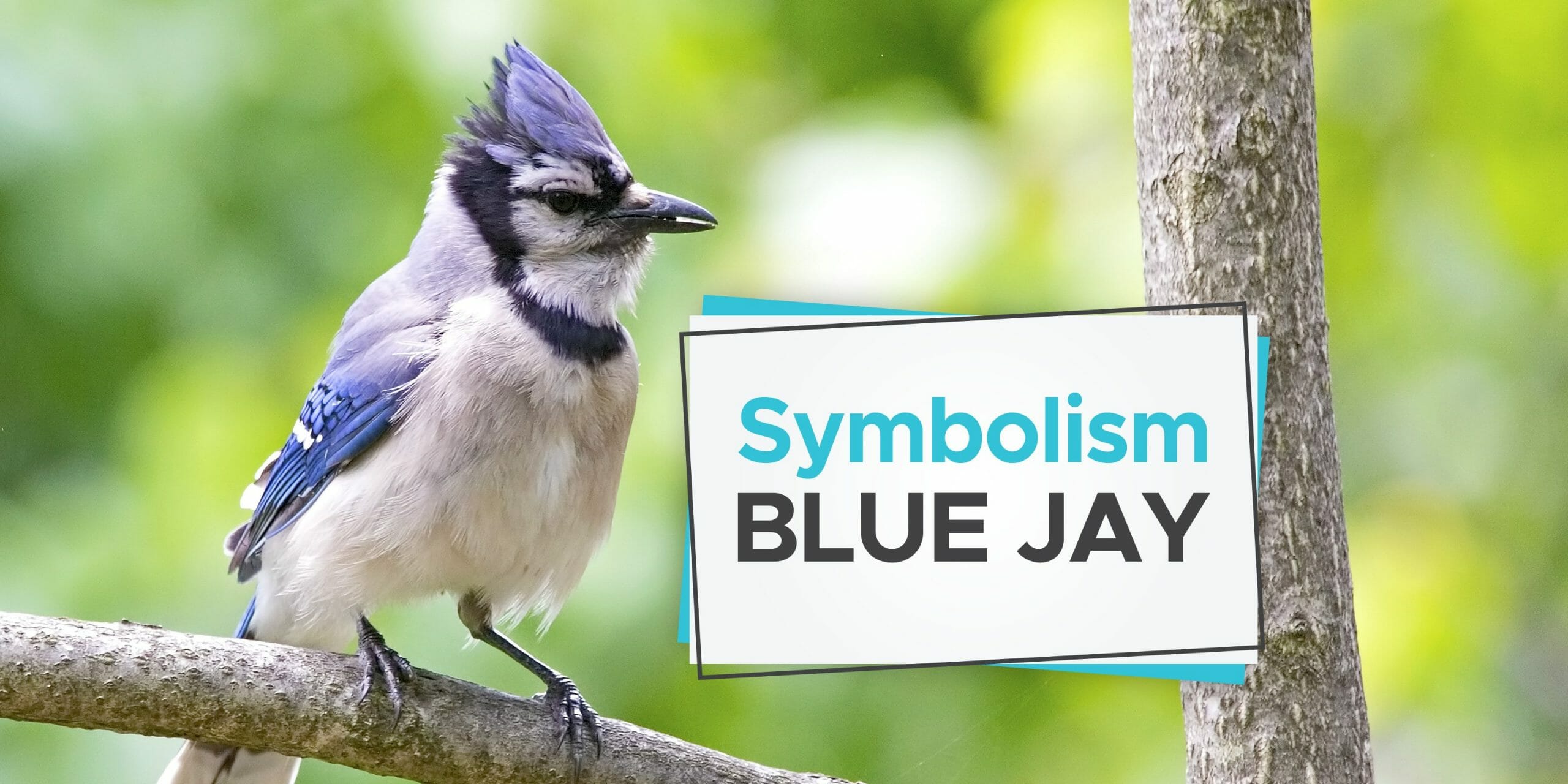 Blue Jay symbolism is an interesting subject and one that many people are keen to learn more about. So, you might be wondering, what does it mean when you see a blue jay?

To understand the common symbolism of a blue jay, it’s important to focus on each of the traits that a blue jay possesses. These will give us insights into the significance of seeing a blue jay in your yard or while you’re out and about walking in nature.

One of the primary symbolism of a blue jay centers around communication. So, if you see a blue jay it could mean that you should communicate more clearly or that the people around you are not being totally truthful in their communication with you.

Let’s look at some more of the common blue jay symbolism.

Here are some common interpretations for seeing a blue jay. 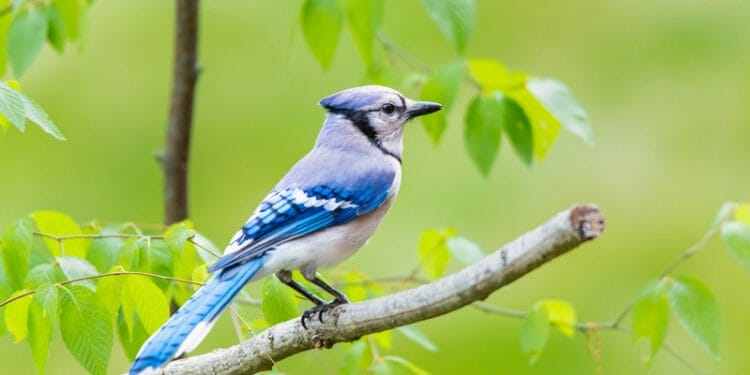 The blue jay features in many Native American myths especially those of the Sioux, Chinooks and Coast Salish tribes. Some tribes believe that the blue jay is closely related to the raven.

Native Americans also associated the blue jay with being untrustworthy or a trickster. Due to their noisy characteristics, blue jays were considered to be gossips who were arrogant, noisy, selfish and prideful.

A blue jay is also a sign that you should plan for the future and to stay steadfast to the path that you’ve chosen. 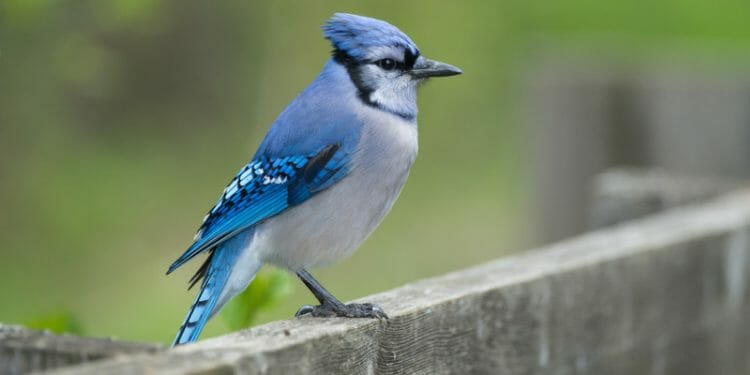 The Celts believed that the blue jay carried messages between dimensions. They also identified the blue jay as a trickster just like the Native Americans.

The Celts also believed that the blue jay was a sign that they should prepare well for the future. This is because this bird will gather food sources such as acorns and store them away for when other food sources are limited.

Because blue jays are so fond of acorns, the Celtic people believed that these birds were the souls of Celtic Druids and helped to plant oak trees far and wide.

Interesting Fact
According to one common legend, the original blue jay was much larger in size. This jay was trapped by humans and then harnessed to a plow. The blue jay didn’t like this and managed to break free. The bird then asked the Great Spirit to make him smaller so that he would never be a slave to humans again. It’s believed that the black feature on a blue jay’s chest signifies the mark of the plow.

What Does It Mean If You See A Blue Jay In A Dream?

Dreaming about blue jays could be related to communication. It is believed that messages in our dreams are communications from the Higher Consciousness. In this instance, your spirit guides may be urging you to speak up for yourself and to communicate more clearly.

On the other hand, if you see a blue jay feather in your dreams it could mean that you should be careful who you trust. There may be people around who are lying or being deceitful. 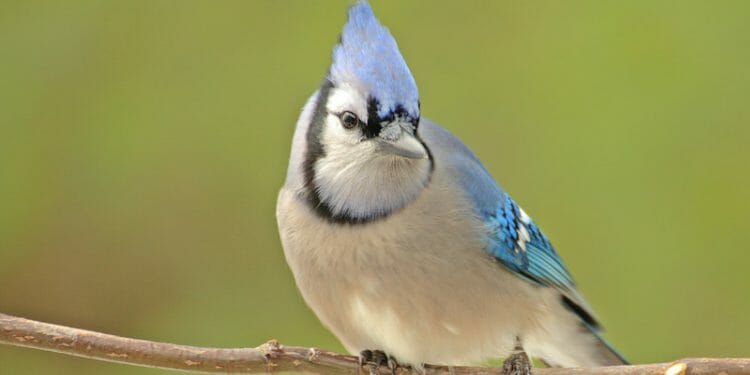 What Is The Significance If A Blue Jay Is Your Spirit Animal?

If the blue jay is your spirit animal, it’s a good indication that you should speak up not only for yourself, but also for the greater good. It means that you should ask for what you want in a direct manner without being rude or disrespectful.

Your blue jay spirit animal may also be urging you to stop procrastinating and deal with the issue at hand. You should, however, do this tactfully and without malice.

What Is The Significance If A Blue Jay Is Your Totem Animal?

A totem animal is one that you have chosen to surround yourself with. It is generally one that you are drawn to and think about all the time.

If the blue jay is your totem animal, you are indeed fortunate because the blue jay is a powerful ally. This is especially true if there is a person who is trying to harm you, your family or your business.

Blue jays can be quite powerful and aggressive when they’re guarding their territory. So, if you find that someone is threatening or bullying you in some way, you should call on your totem animal to come to your assistance. This will help you to more easily speak your mind.

Remember the relationship between the blue jay and the oak tree? Oak trees are strong and majestic trees that stand tall and never falter. Therefore, with a blue jay on your side, you’ll have the courage to be bold, flexible and adaptable.

What Is The Significance If A Blue Jay Is Your Power Animal?

A power animal is one that you identify with internally. It’s the one that gives you inner strength when you need it the most.

If you have a blue jay power animal enter your life, then it might be telling you that there is someone in your life who is trying to deceive you. Calling on your blue jay animal is also useful if you feel intimidated or threatened by another person.

If you’ve chosen the blue jay as your power animal, it could also mean that you’re spiritually aware and you’re wanting to develop that awareness to greater heights.

What Does It Mean If You’ve Chosen To Have A Blue Jay Tattoo?

Many people choose tattoos because they have some sort of significance in their lives. Having a blue jay tattoo can indicate that you’re a talented person and want to show the world.

It’s also an indication that you’re open to change and embrace the many changes that you might be facing. Remember too, that the blue jay crest represents a link with the Higher Consciousness.

Can Seeing A Blue Jay Be A Message From A Lost Loved One?

In general, animal spirits are far more sensitive than those of humans. Therefore, birds such as blue jays, cardinals or hawks can be sensitive to the messages that your loved one might be trying to tell you.

Look out for signs that a blue jay may be acting abnormally when it sees you. It might just be trying to give you a message from a loved one who has passed over.

What Does It Mean When A Blue Jay Crosses Your Path?

If a blue jay crosses your path, it’s generally a sign that you’re on the right track and that you should continue on your current path.

This may happen at a time when you’re at a crossroad or you’re uncertain whether you’re heading in the right direction. Take the appearance of a blue jay as a positive confirmation to keep doing what you’re doing.

What does it mean if you see two blue jays together?

What does it mean if you see a blue jay repeatedly?

If you’re constantly being visited by a blue jay, it could be an indication that you’re on the right path and that you should keep going and continue to follow your dreams.

What does it mean if you see a blue jay and a cardinal together?

This could be an indication that you’re receiving spiritual guidance. The cardinal is a representation of wisdom from the spiritual world. It also provides protection and guidance. If you couple this with the curiosity and intelligence of the blue jay, you could interpret this as a sign to deepen your own knowledge.

According to Christian beliefs, a blue jay that visits your home is indeed a bringer of good luck. Christians believe that seeing a blue jay is definitely a good omen.

Blue jays are noisy birds that are a delight to watch and observe when they visit our gardens. However, if you’re into signs and symbolism, you may be wondering if there’s any significance to seeing a blue jay in your yard often.

There are many different symbolisms associated with blue jays across different belief systems and cultures. To try and determine what it means when you see a blue jay, watch its behaviour and consider what you currently have going on in your life.

Do you have a question that you can’t find an answer to? Are you dealing with a difficult situation or person? Do you feel that someone in your life is not being truthful?

The answers to these question should be an indication of what seeing a blue jay symbolizes for you in any one moment.