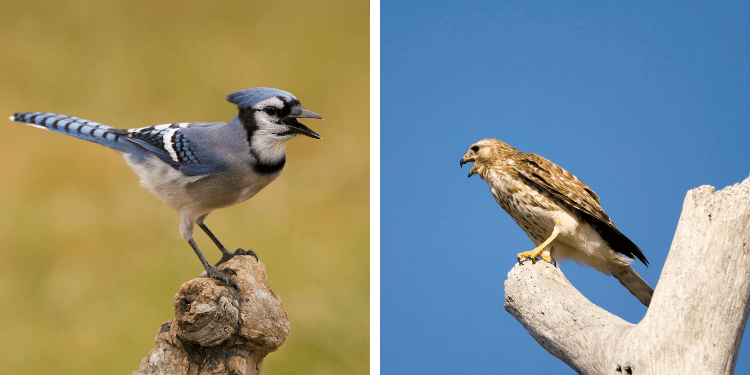 If you have blue jays visiting your yard, you may have heard them mimicking the sounds that hawks make. In fact, blue jays have a wide repertoire of vocal sounds and are also excellent mimickers. But, why do blue jays mimic hawks?

Of course, we can’t know for sure why they do this but there have been studies done by ornithologists. These studies have come up with two very probable reasons.

Let’s delve a little further into these reasons and others that have been put forward to see what we can uncover.

What Type Of Hawks Do Blue Jays Generally Mimic?

We understand that blue jays do indeed mimic hawks as well as other birds and even common urban sounds such as a cat mewing or a cellphone ringing. But, are there certain species of hawks that blue jays like to mimic?

Here’s a selection of hawks that blue jays have been heard to mimic.

It’s also interesting to learn that blue jays will mimic the sound of both the Eastern Screech owl and the Fish crow (even though Blue Jays are considered corvids). It’s a common fact that both hawks and owls are predators that the blue jays try to avoid. 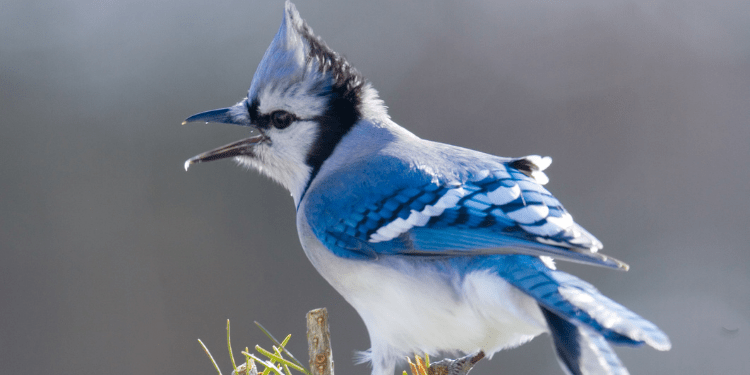 Some Possible Explanations As To Why Blue Jays Mimic Hawks

This is possibly due to the fact that there’s no actual pattern as to when a jay will make a hawk call. Blue jays will imitate hawks during all seasons and not just during nesting.

People have also witnessed a blue jay mimicking a hawk when it was entirely alone. At this time, there was no evidence that a hawk was in the vicinity or that there were other birds close by or near a tempting food source.

Nevertheless, certain theories have been bandied about as to why blue jays mimic hawks. Here are just a few.

1. To Attract A Mate

Blue jays are actively heard imitating hawks during the mating season. This is when unpaired males will put on a show for any females that are around in the hope that they will be chosen as a life partner. Blue jays do mate for life and, therefore, this courting ritual is only carried out by young jays that are yet to mate.

In order to attract a female, perhaps the male bird is showing off by producing as many different sounds as it possibly can.

2. To Identify Their Mate When Other Mating Pairs Are Nearby

Once again, during mating season, it’s important for each jay to know where its mate is. Especially when there are other mated pairs within the same vicinity. Although jays are somewhat territorial when it comes to nesting, they’re quite happy to have other jays nesting in the same area.

Because of this, it has been theorized that perhaps blue jays will use the hawk call to determine where it’s mate might be. There’s of course, no proof that this is the case. 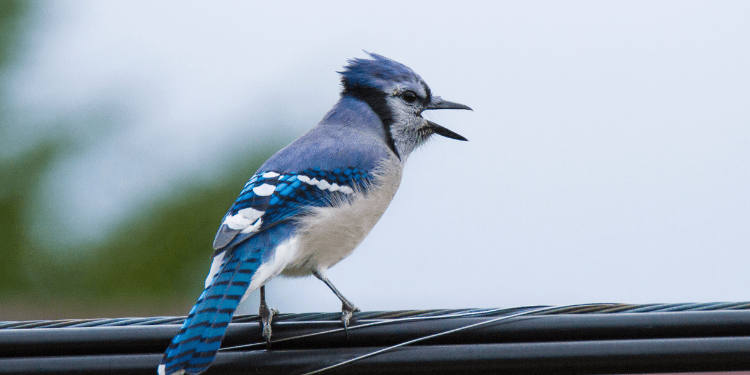 3. To Defend Their Territory

During the nesting period, blue jays do not like any other living being near their nest. Whether that be another blue jay, a predator, or even a human. Although their behavior is not especially territorial toward other jays, they do protect their young with fervor and a lot of noise when they see an intruder.

Therefore, mimicking a hawk will most likely scare off other birds as well as small mammals that may endeavor to steal the jay’s eggs or even the young hatchlings. As hawks are large predatory birds, most smaller birds and mammals will leave the area if there’s any hint of one being nearby.

4. To Alert Other Jays That A Hawk Is Nearby

To a blue jay, a hawk is a predator. Therefore, it would be logical to assume that blue jays would mimic the sound of a hawk in order to warn other jays about the hawk’s presence.

This sounds like a very effective communication method between blue jays as, surely, the other jays would know that it’s a blue jay calling rather than an actual hawk.

Blue jays have an interesting community type structure whereby different mated pairs will often share the same territory. Different pairs will also come together after the young hatchlings have left the nest but are still slightly dependent on their parents.

Even though not all blue jays are migratory, some will actually congregate together in flocks and take a short migratory journey as a group. This would indicate that this reason is indeed a feasible one. 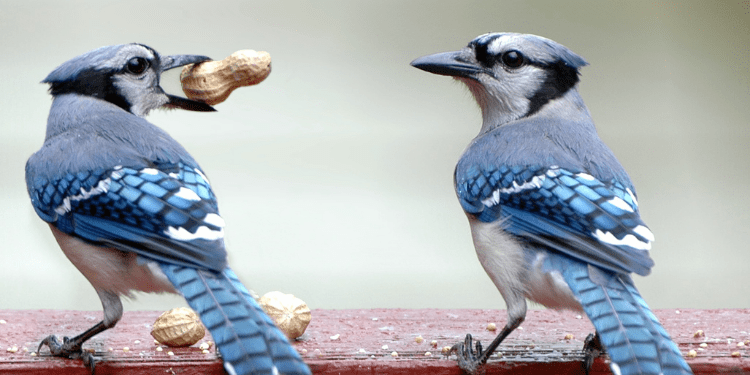 5. To Fool Other Birds Into Believing That A Hawk Is Nearby

Most smaller birds including songbirds, will avoid an area where a hawk has been spotted. This is because hawks will commonly search out smaller birds as prey.

Therefore, a blue jay may be using the call of a hawk to fool these songbirds into believing that there is indeed a hawk around. This would effectively scare the smaller birds away and the jay could happily enjoy all the food in the feeders without being disturbed.

People have also witnessed blue jays imitating a hawk call to make another bird drop its food. The jay will then swoop in and pick up the dropped food for himself.

6. To Add To Their Extensive Repertoire

As already mentioned, blue jays have a wide repertoire of sounds that they make. Plus, the sound of a hawk is quite similar to other natural calls that blue jays make. Therefore, it may just be that jays imitate hawks to add to their already extensive repertoire.

Most blue jays will learn a full repertoire of calls within the first few months of life. Therefore, we can assume that if these birds were exposed to hawk calls during that time, they would learn these sounds and then repeat them.

It is noted that not all blue jays will imitate hawks. Maybe the ones that don’t have never been exposed to a hawk in the early stages of their life.

Many times it’s not easy to tell the difference between the sound of a real hawk and a blue jay imitating a hawk. It requires a good ear and some practice to easily identify the two. Of course, if you see a blue jay and there’s no sign of a hawk nearby, you can be sure that it’s the jay making the sound.

The other identifying factor can be the quality of the call itself. Although blue jays are excellent mimics, their rendition of a hawk call will often be shorter and a little more gravelly.

What does it mean when you see a blue jay?

Do blue jays warn other birds?

Even though blue jays tend to scare away other birds from your feeders, quite often their raucous calls will warn other birds that there’s a predator nearby.

Do blue jays scare away cardinals?

Yes, blue jays are commonly referred to as “bully” birds because they scare away any other smaller birds.

What other bird mimics the sound of the hawk?

The European Starling can also mimic the sound of a hawk.

Do hawks go after blue jays?

They most certainly do. Plus, hawks will also rob the nest of the blue jays.

Although there’s no definitive reason as to why blue jays mimic hawks, there are certainly a lot of theories put forward by different bird enthusiasts and specialists.

On the other hand, it could just be that the blue jay has adopted the sound of the hawk because it is both easy to imitate and to add to its already extensive repertoire. Whatever the reason, if you’re a bird watcher, it’s important that you learn the difference between the sound of a real hawk and that of a blue jay doing its best imitation of one.

Have you been fooled by a blue jay imitating a hawk? What other imitations have you witnessed from blue jays visiting your yard. Please feel free to share your stories with us in the comments below.