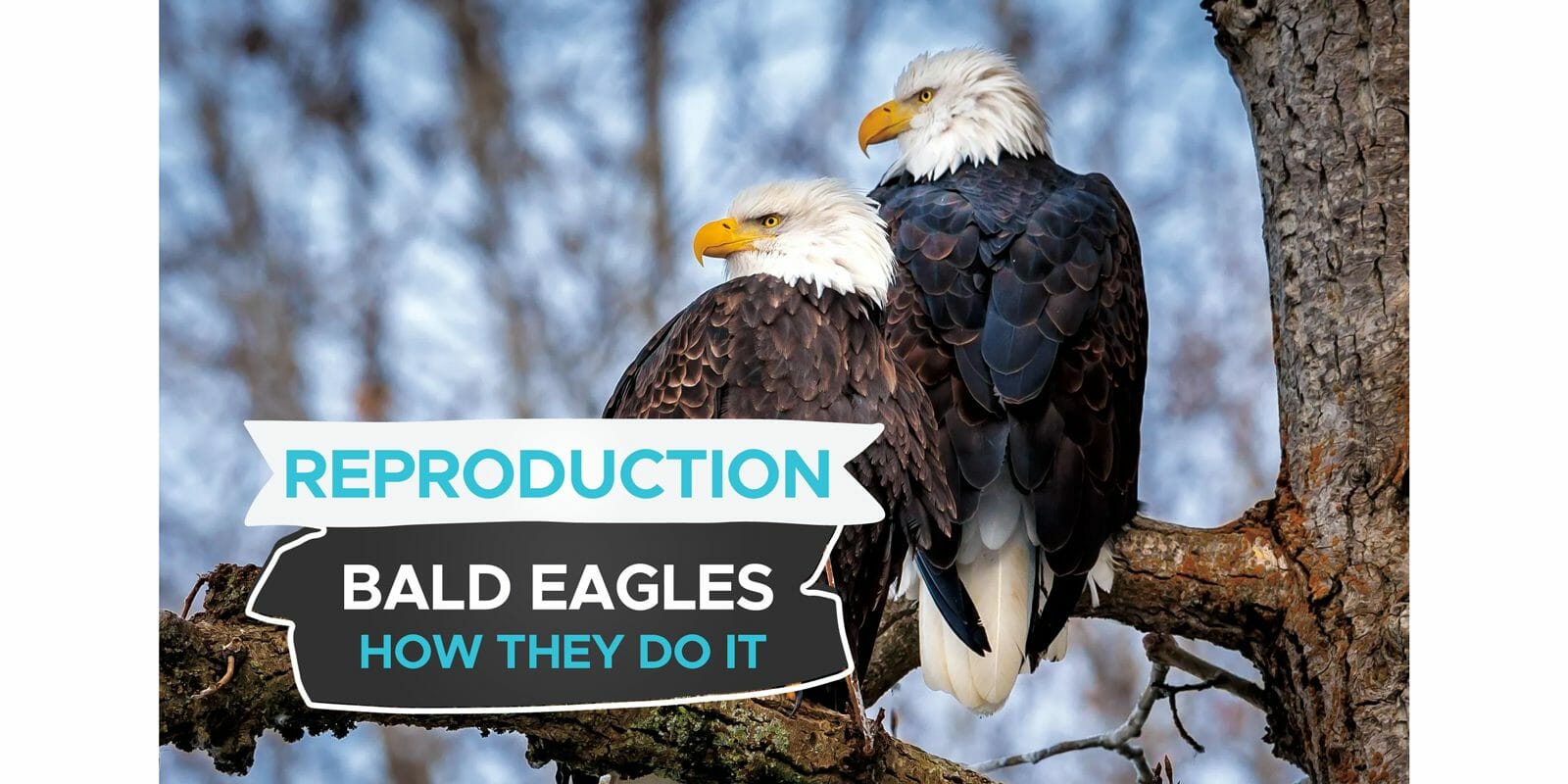 Since being on the endangered list back in the 1970s, bald eagles have made an amazing comeback and numbers are increasing year by year. You might be wondering how bald eagles reproduce and what their life cycle is like.

Bald eagles are monogamous. This means that they have the same mate year after year, even though each eagle may spend the winters on their own. A mating pair will continue to produce offspring every year unless one of the pair dies. When this happens, the remaining eagle will search for a new mate at the beginning of the next nesting season.

Let’s look at how eagles reproduce.

A juvenile bald eagle reaches maturity at around 5 years of age. This is also the time that the eagle will have finished changing feather colorings and will sport the white head and tail feathers. Bald eagles can live for around 30 years and will raise a new generation every year.

As is the case with many other bird species, the female bald eagle chooses who she wants to mate with. To choose her mate, the female selects a male she likes the look of to fly with. During this process she’ll pick a stick and drop it to see if the male can catch it. If he does, she’ll continue to pick larger sticks and fly higher, dropping the stick for the male to catch each time.

If the male fails to catch any of her dropped sticks, she’ll fly away from him as a signal that he is not the one that she wants to mate with. The female will continue this testing until she finds a male bald eagle who can catch all of her sticks and he’s the one that she chooses to mate with for life.

The courtship ritual may also include the death spiral. This is when eagles will interlock their talons while high up in the air. They spiral down in full flight and disengage from each other just before hitting the ground.

For bald eagles, the actual mating happens while perched on a branch. The male will come up behind the female and touch his cloaca to hers. This transfers the sperm from the male to the female and is referred to as the cloacal kiss.

This copulation may occur several times a day and over a number of days until it has produced a successful result. 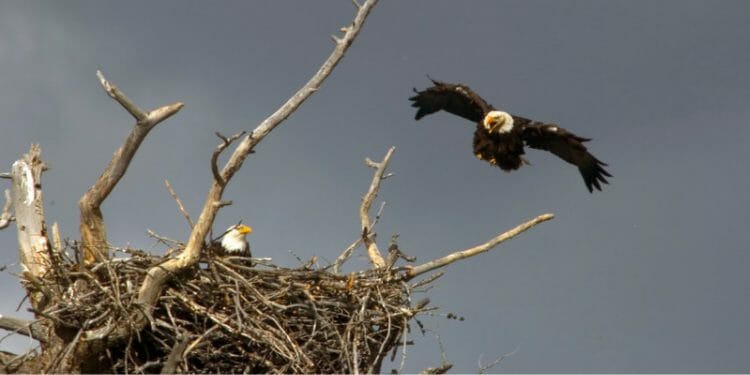 Once a mated pair have bonded, they’ll start to build a nest. Eagle nests are called aeries. These are built out of twigs and sticks on the tops of very tall trees. A lot of eagle pairs will return to the same nest year after year. Each year, they may add additional sticks into the nest and also reline the interior of the nest with grass, moss, corn stalks and even some of their own downy feathers.

This continuous renovating of the nest means that eventually an eagle’s nest can be huge with a diameter of around 6 feet and a height of 6 feet as well. This massive nest can easily weigh over a ton. In fact, bald eagles have the largest nest of all North American birds.

The best nesting sites that eagles prefer are very tall trees that are situated near a large body of water such as a lake or river. Preferred nesting trees are between 50 to 125 feet tall. The nest is normally situated in the fork of the tree close to the trunk and about three-quarters of the way up the height of the tree. This gives the birds a good vantage point to search for food and is high enough to keep predators away.

Laying And Incubating The Eggs

The female eagle will lay her eggs around 5 to 10 days after mating. She normally lays two eggs sometimes around 3 to 6 days apart. The eggs are off-white in color and weigh around 4 ounces. They’re normally around two inches wide and three inches long.

Both the male and female eagle will take turns in incubating the eggs to keep them warm. While one sits on the nest, the other will hunt for food or stand guard to watch out for predators.

It takes around 35 days before the eggs start hatching. Usually, the egg that is laid first will be the first one to hatch followed by the second egg a few days later. On rare occasions, the female bald eagle may lay more than two eggs but never more than four.

Each chick can take up to two days to fully emerge from the egg. Eagle chicks are blind for several hours when they first hatch and they’re also wet and exhausted. During this time, the female bald eagle will cover the baby chick with her feathers to keep it warm. 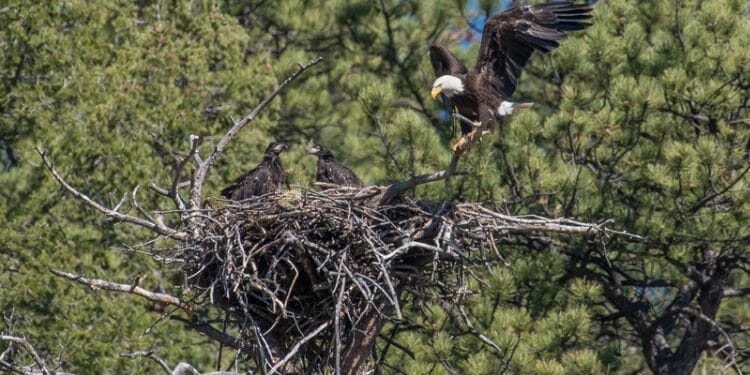 Caring For The Chicks

Baby eagle chicks are called eaglets. They are cared for by their parents in the nest for around two and a half months. When first hatched, eaglets are just balls of white fluff. At around five weeks, they’ll start to change color. Their down feathers turn gray and their feet grow quite large and are bright yellow.

During their growth time in the nest, the baby eaglets are fed by both parents. Their diet mainly consists of fresh fish, however, their parents may also feed them rabbits, ducks or squirrels.

Around 12 weeks of age, the eaglets are ready to start becoming fledglings. At this point, their feathers have turned brown with lots of white markings. Their wings are now strong enough to catch the wind.

It’s at around this stage that the parent eagles stop providing as much food for the eaglets to encourage them to start leaving the nest. The young eagles soon realize that it might be time to leave the comfort of the nest.

They slowly make their way onto the branches that are near the nest. Then, they step off the branch and start learning how to fly. They might make a few awkward attempts at first but their parents are always nearby to watch their progress.

During this “learning to fly” phase, the fledglings will return to the nest several times until they learn to refine their flying skills. The parents will continue to provide some food for the young eagles until they’re proficient in hunting for their own.

Learning to hunt effectively can take another 4 to 12 weeks. After about 120 days, the young eagles will be as large as their parents.

Once they’re fully grown, the juvenile eagles will leave their parents to spend their first 5 years on their own. During this time, their feather will go through a number of color changes until they reach maturity and are ready to mate for the first time.

Unfortunately, around 50% of juvenile eagles don’t survive their first year of life. They can suffer collisions with power lines, wind turbines or even cars. Some juvenile eagles may also die from starvation if they haven’t mastered the skill of hunting successfully.  There’s also the risk of mercury poisoning from contaminated fish that they may consume.

Those that do survive, may return to the area near where they were hatched to find a mate and a suitable nesting site. Then the cycle will start all over again. 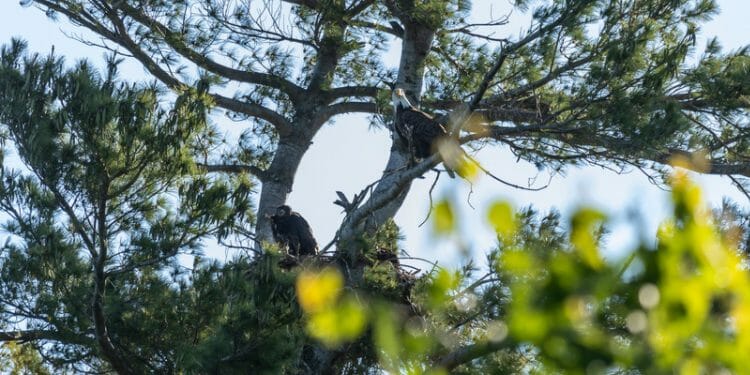 Yes. Both the male and female eagles will take turns in incubating the eggs.

Generally, a female bald eagle will lay two eggs. However, it is possible for her to lay as many as four eggs at a time.

Do bald eagles abandon their eggs?

Bald eagles have been known to abandon their eggs if they’ve been flushed from the nest repeatedly and the eggs have been exposed to periods of cold and rain.

Do bald eagles come back to the same nest every year?

More often than not, bald eagles will return to the same nesting site and nest every year. However, they may choose to build a new nest near the old one if that one has proven to be unsuitable or unproductive.

Bald eagles mate for life and often return to the same nesting site year after year to produce another batch of young eagles. Female bald eagles choose their mate with an interesting courtship ritual.

Bald eagles have the largest nests of all North American birds and will continue to add more sticks and other materials to the same nest every year. Most eagle pairs will raise two young each year.

Eagles who live in the northern areas generally nest in spring while those that live in the warmer southern regions will nest in the winter time.

After leaving the nest, juvenile eagles will spend their first four or five years alone until they are fully mature and ready for mating.