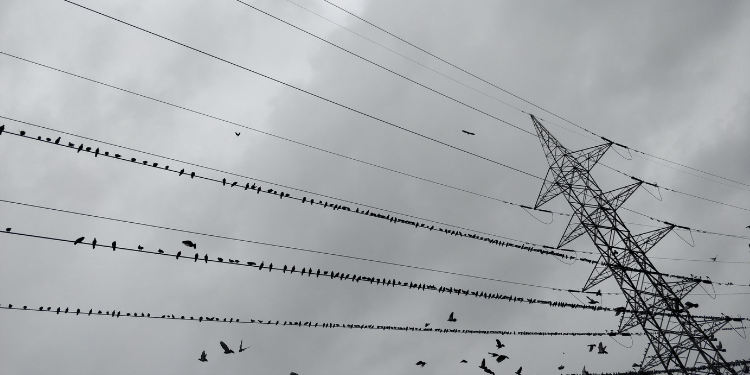 As you drive around the countryside, you might see hundreds of birds sitting on power lines or telephone wires. Have you ever wondered why birds sit on power lines? Well, if you have, read on for some answers.

Primarily, birds will sit on power lines because it gives them an uninterrupted view of the world below. If they’re foraging for food, it’s the best vantage point because their view is not obscured by tree branches or foliage. Additionally, sitting on a power line also gives the birds an extra benefit of warmth as power lines are usually a little warmer than the surrounding air, especially when the weather is cold.

Let’s have a look at the benefits that birds derive from sitting on power lines.

They Get A Little Extra Warmth

As the temperature drops, birds like to conserve their body temperature by sitting together, quite often for long periods of time. Because power lines are slightly warmer, these make an ideal perching place for birds to just sit and conserve their energy.

Power lines are slightly warmer than the surrounding air because of the electricity that flows through them. When birds perch on the power lines, they’ll immediately feel the warmth under their feet.

That’s precisely why you’ll often see a lot of birds perching on power lines later in the day when the temperature starts to drop.

They Are Protected From Predators

Sitting high up on the power lines means that birds are protected from land predators such as cats and foxes. You’ll often find birds sitting on power lines in cities where there are not many trees around.

These power lines allow birds to get up high off the ground and out of reach of many of their predators.

Sitting high up on a power line gives the birds an uninterrupted view of the world below. They can easily use their very keen eyesight to spot any viable food sources as they sit and look around.

From their view high up on the power lines, they can spot insects below as well as source any fruit or nut bearing trees that might be of interest. 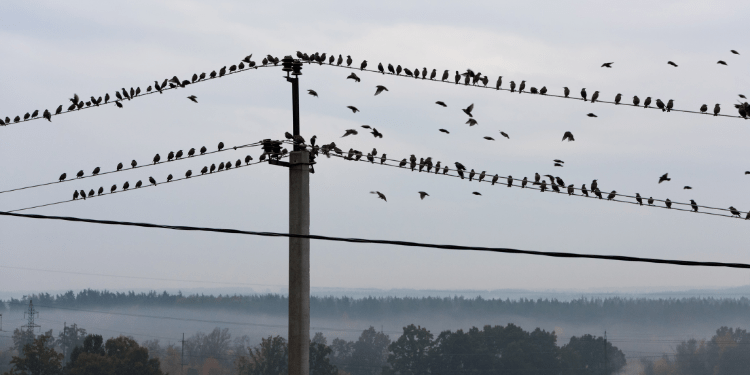 It’s A Great Meeting And Resting Place Before Migration

It’s interesting to note that some migratory birds will gather in large flocks on power lines before they start their migratory journey. This is why you’ll see a lot of birds on power lines during the late summer and early fall.

It’s believed that they are gathering in numbers before they start their long migratory journey.

Interesting Fact
During the breeding season you may not see as many birds perching together on power lines. This is because they don’t want to sit next to their competitors when looking for a mate. On the other hand, it’s quite common to see male songbirds sitting on a power line and singing joyfully. This is because they can be easily seen and heard by their potential mates.

How Can Birds Sit On Power Lines And Not Get Electrocuted?

While you’re contemplating the reason of why birds sit on power lines, you might also be asking why they don’t get electrocuted. To answer this, we need to understand the flow of electricity.

Electricity needs conductors to flow through and ultimately, it is always looking for the fastest and easiest route to the ground. This creates a closed circuit as the electricity is first pulled from the ground at the power station. It then flows through the power lines and into your home’s appliances. Eventually, the electricity will move back into the ground.

Therefore, the electricity is always looking for the least resistant path back into the ground. This is why electricity conductors are earthed. 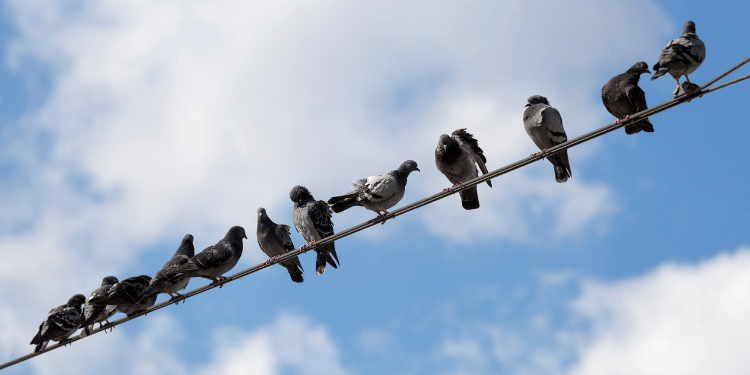 Large Birds Are More Susceptible To Electrocution Than Smaller Ones

If a bird happened to have one foot on one power line and one foot on another line, this would open up the path for the electricity to flow more easily through the bird and it would then be electrocuted.

That’s why large birds like eagles, hawks and owls are more susceptible to electrocution when they perch on power lines than smaller songbirds. Because of their wide wingspan, a raptor is more likely to touch two wires as it’s landing or taking off.

It’s also more likely for one of their wings to brush the power pole as they’re landing on a power line. There have been many instances of raptors being electrocuted out in the deserts in the US. This is because, sometimes, the power lines are the only high up places for the birds to perch.

Why Are Birds Sitting On Power Lines All Facing The Same Direction?

There’s an easy explanation to this phenomena as well. Basically, it’s for wind resistance. To understand this, you have to consider the way that birds are built. Generally, they are heavy in the front and much lighter in the back.

What Happens When The Wind Is Not Blowing?

Another interesting phenomena to observe is how considerate birds are when they’re perching on power lines. If a new bird comes along and is looking for a spot to perch, the other birds will move along to make room for the newcomer.

You see, birds who like to perch are generally quite sociable and considerate of other birds. Therefore, they’ll happily move along the wire to allow a newcomer a perching position.

You’ll also find that birds are generally evenly spaced along the power lines. It’s believed that the reason for this is allow enough space to make take off from the wire nice and easy.

On the other hand, if the weather is very cold, you might find a group of birds huddled close together. This means that they are using each other for warmth, just like you find your dog cuddling up close to you on a cold winter’s night.

Which Bird Species Are You Most Likely To See On Power Lines?

Of course, this depends entirely on where you live or where the power lines are located but here’s a list of the most common birds that like to perch on power lines. 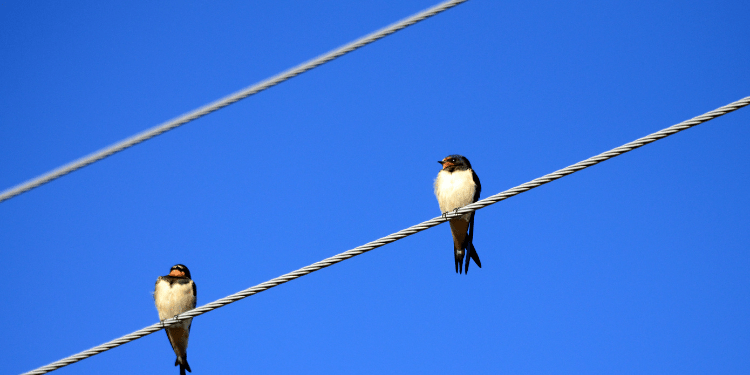 Are power lines warm for birds?

How do you keep birds off power lines?

It’s possible to install a visual or sound repellent device on top of power poles to scare the birds away.

What noise will scare birds away?

It’s possible to get ultrasonic devices that emit a static sound that will annoy birds and keep them away.

You now have a definite answer as to why birds sit on power lines. It’s partly for warmth, partly for safety and partly to forage for food. Having such a high vantage point allows the birds to easily observe the ground below for possible food sources while being protected from predators such as cats and foxes.

You’ve also learned why birds mostly don’t get electrocuted while they perch on a power line. Unless of course, they touch two wires simultaneously or accidentally touch the power pole while they’re perched on the wire.

And, to top it off, you also now know why sometimes, all the birds are facing the same direction and at other times, they’re not. It has something to do with whether or not the wind is blowing.

Plus, I bet you didn’t know that birds are quite sociable and also very considerate. They’ll happily move along to make some space when a newcomer arrives for a perch.