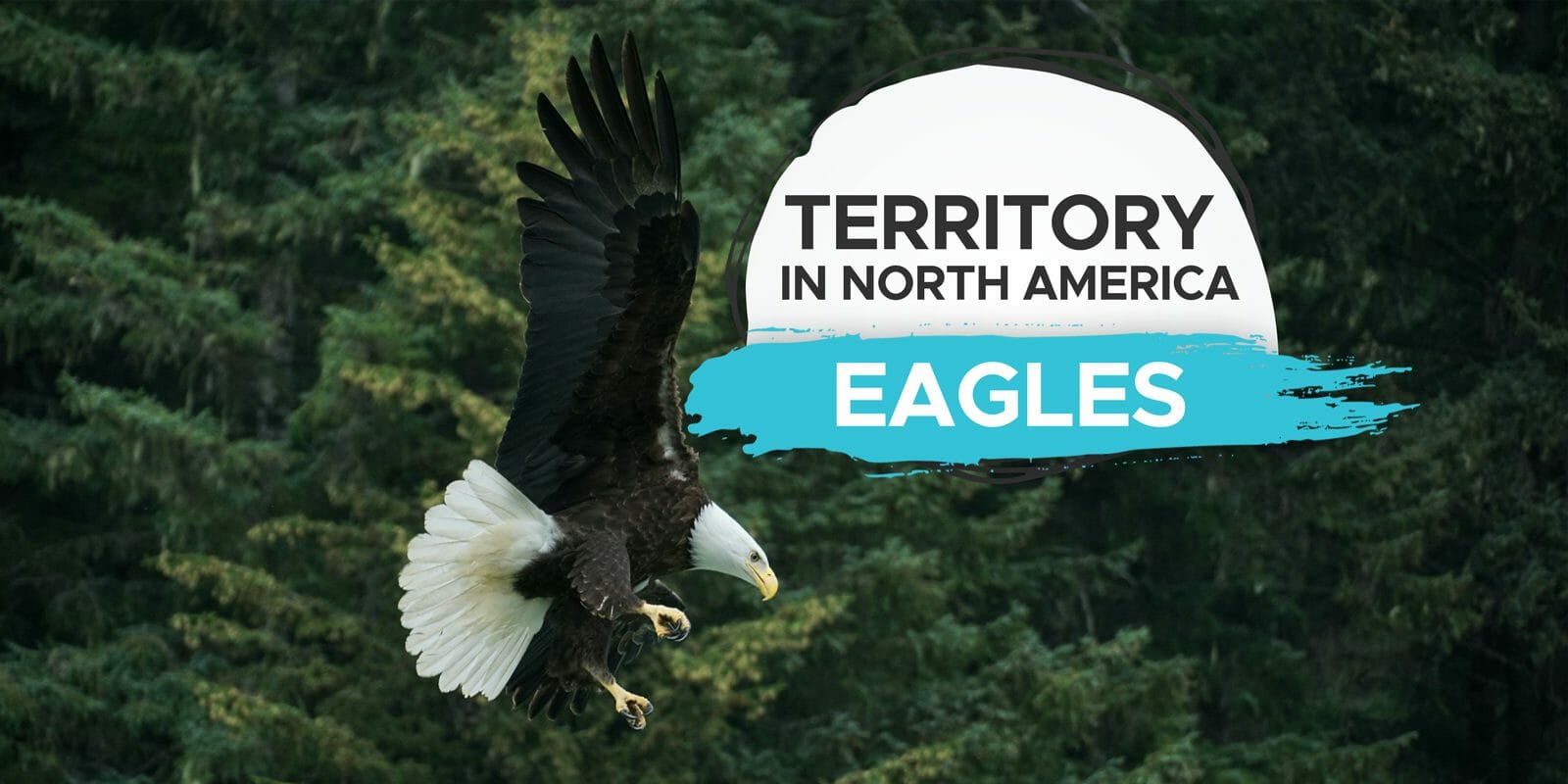 The bald eagle was chosen as America’s national emblem back in 1782. It symbolizes courage, strength and freedom. The symbol is depicted on both US currency and other official documents such as passports. But, you might be wondering where bald eagles actually live.

Bald eagles live in north America. They can be found across a large territory from the border of Mexico right up into Canada and Alaska. These majestic birds are often seen in Alaska and along the west and east coasts of America all year round. During their migration in winter, it’s possible to see them in other parts of the country.

Most importantly, bald eagles are commonly found around large lakes and rivers. This is where they do most of their feeding and raise their young. In wintertime, bald eagles frequent unfrozen lakes and coastal areas near rivers and other large bodies of water.

Bald Eagles Were On The Brink Of Extinction In The 1970s

You may not be aware that in the early 1970s, bald eagles were actually on the brink of extinction due to the destruction and degradation of their native habitat as well as illegal shooting and the contamination of their food source through the extensive use of DDT.

This prompted the US government to ban the use of DDT and initiate the Endangered Species Act to protect native habitats. Thanks to this and the efforts of various conservation groups around the country, the bald eagle population has recovered and is still increasing across the country.

Interestingly, the bald eagle was not considered threatened or endangered in Alaska because populations there had not declined as they did across north America.

Bald Eagle Population By Area In 2009

From a report by the US Fish and Wildlife service in 2009, the bald eagle population and its distribution across north America and Alaska was quite healthy. Here’s a list of the estimated number of bald eagles per region.

A more recent study by The US Fish and Wildlife Service in 2019 estimated that there were now 316,708 bald eagles across northern America in the lower 48 states. This is basically more than quadruple the population back in 2009.

What States Do Bald Eagles Live In?

Bald eagles live in all the lower 48 US states as well as Alaska, Canada, and Mexico. The only US state that bald eagles do not live in is Hawaii.

Here’s a map that shows the general distribution and habitat areas of bald eagles. 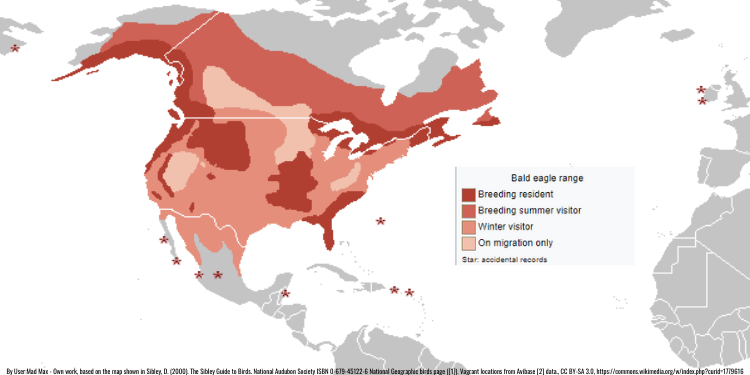 Preferred Habitat Of The Bald Eagle

Bald eagles prefer to live in areas that are close to rivers and lakes as well as coastal areas. These birds usually build their nest in tall trees in these regions. This habitat allows the eagle easy access to its preferred diet of fish.

Bear in mind though, that bald eagles also eat small mammals and reptiles when fish are in short supply. They are also fond of an “easy feed” and will feed on carcasses that have already been killed. In winter when a lot of waterways are frozen, this is mainly how the bald eagle finds food.

Bald eagles who live in Canada prefer the Pacific coast of British Columbia. However, they have also been spotted in northwestern Ontario and the Prairie provinces.

Research has shown that bald eagles prefer to nest in trees that are over 66 feet tall and that have an open structure. This allows the birds to have a good vantage point for surveying the surrounding area and it also protects the young from any possible predators.

The bald eagle does not like to nest too close to where humans live. Therefore, it normally chooses sites that have minimal human habitation or disturbance. 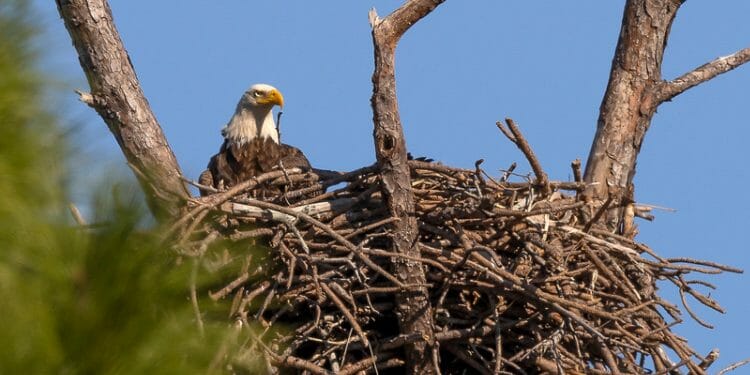 Some Of The Best Places To Spot Bald Eagles

Seeing a bald eagle in the wild is an experience that every nature lover looks forward to. Here’s a selection of areas that you might like to visit to catch a glimpse and maybe a photo or two of a bald eagle soaring in the skies above.

Alaska along the Chilkat River

Almost half the bald eagle population lives in Alaska and its a favorite area for these birds during winter. The Alaska Chilkat Eagle Preserve in Haines, offers a great spot to watch for bald eagles.

Bald eagles like to gather here during the months of October through to February for the annual salmon run. This phenomena can attract around 3000 to 4000 bald eagles every year.

Although winter is a great time to visit this area to spot some bald eagles and maybe even see a few diving for salmon, you’ll find bald eagles in this reserve all year round.

North of Vancouver in Canada

Rivers that are popular with bald eagles include the Mamquam, Squamish and Cheakamus rivers. In fact, in 2014, a research survey counted more than 1600 bald eagles around Brackendale.

Bald eagles are frequently seen in these areas between the months of November through to February.

In the town of Dubuque in Iowa

In January, the town of Dubuque in Iowa holds its annual Dubuque Bald Eagle Watch. This festival even provides excited visitors with spotting scopes. The most popular spot for watching the eagles is at Lock & Dam #11. This dam stops a section of the river from freezing over and, therefore, provides the eagles with a great fishing spot.

Minnesota along the Mississippi

During the months of January and February, bald eagles will spend their time along the Mississippi river, hunting for fish. There’s a National Eagle Center in the town of Wabash that conducts bus trips to some of the prime viewing areas along the river.

Emory, the Eagle Capital of Texas

Surrounded by large lakes, the town of Emory in Texas holds its annual Eagle Fest in January each year. During the festival, visitors can hop on a barge tour to spot bald eagles hunting for fish in one of the area’s lakes.

One of the best nesting sites for bald eagles is in Washington. Each year, hundreds of bald eagles frequent areas such as the Upper Skagit River Watershed and the Ridgefield National Wildlife Refuge. This is a great place to spot bald eagles from December each year. 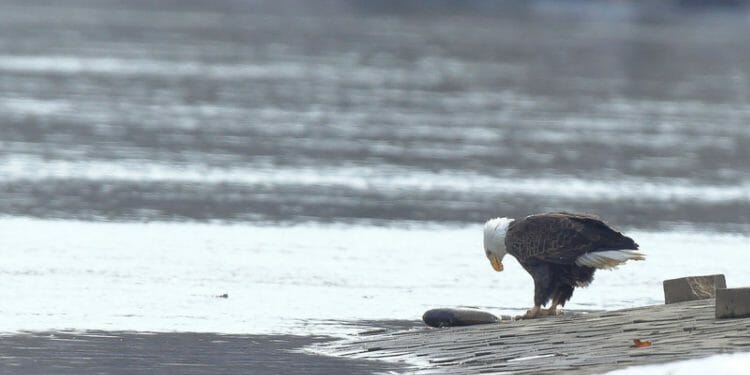 During winter each year, thousands of bald eagles are seen migrating to this area. These birds enjoy hunting for fish in the Illinois and Mississippi rivers. Visiting this area between December and  March will guarantee that you can spot some bald eagles doing what they do best.

The North Platte River in Nebraska

The Platte river is a popular hangout for bald eagles in the winter time. If you want a good viewing spot, try the Sutherland Reservoir which is near North Platte.

At the Klamath Basin on the border of Oregon and California

Thousands of bald eagles migrate to this area each year during winter. You’ll find plenty of good viewing spots where you can sit and wait to spot an eagle or two soaring above.

When visiting any of these areas make sure that you keep your eyes peeled on the skies and try not to make too much noise as this can scare the eagles away into hiding.

The best times to see eagles out hunting are early in the morning or late in the afternoon. Just be patient and enjoy the simple pleasure of being out in nature. 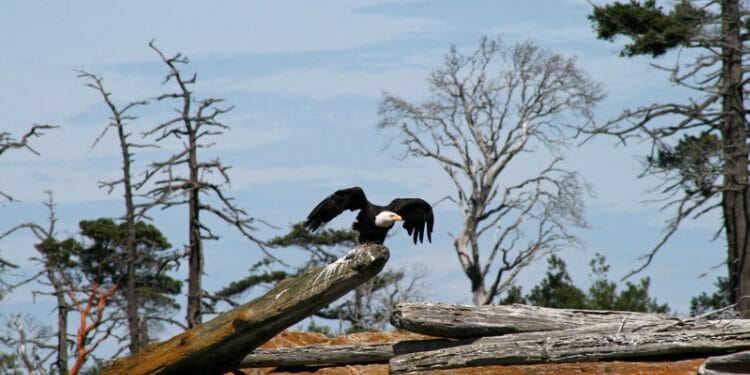 What type of habitat does a bald eagle live in?

Bald eagles like to live near water such as rivers, streams and lakes. This is because they prefer to eat fish.

How big is a bald eagle’s territory?

Generally, a bald eagle’s territory covers between one to six square miles.

What is the lifespan of a bald eagle?

Bald eagles live in north America as well as Canada and Mexico. They are found nowhere else in the world. Alaska is one of their favorite breeding areas but these majestic birds can be found nesting in other parts of the United States as well.

In fact, the only US state that does not have bald eagles is Hawaii. The most common areas to spot bald eagles is anywhere near large waterways such as rivers and lakes and along the coastline. This is because the favorite food for these birds is freshly caught fish.