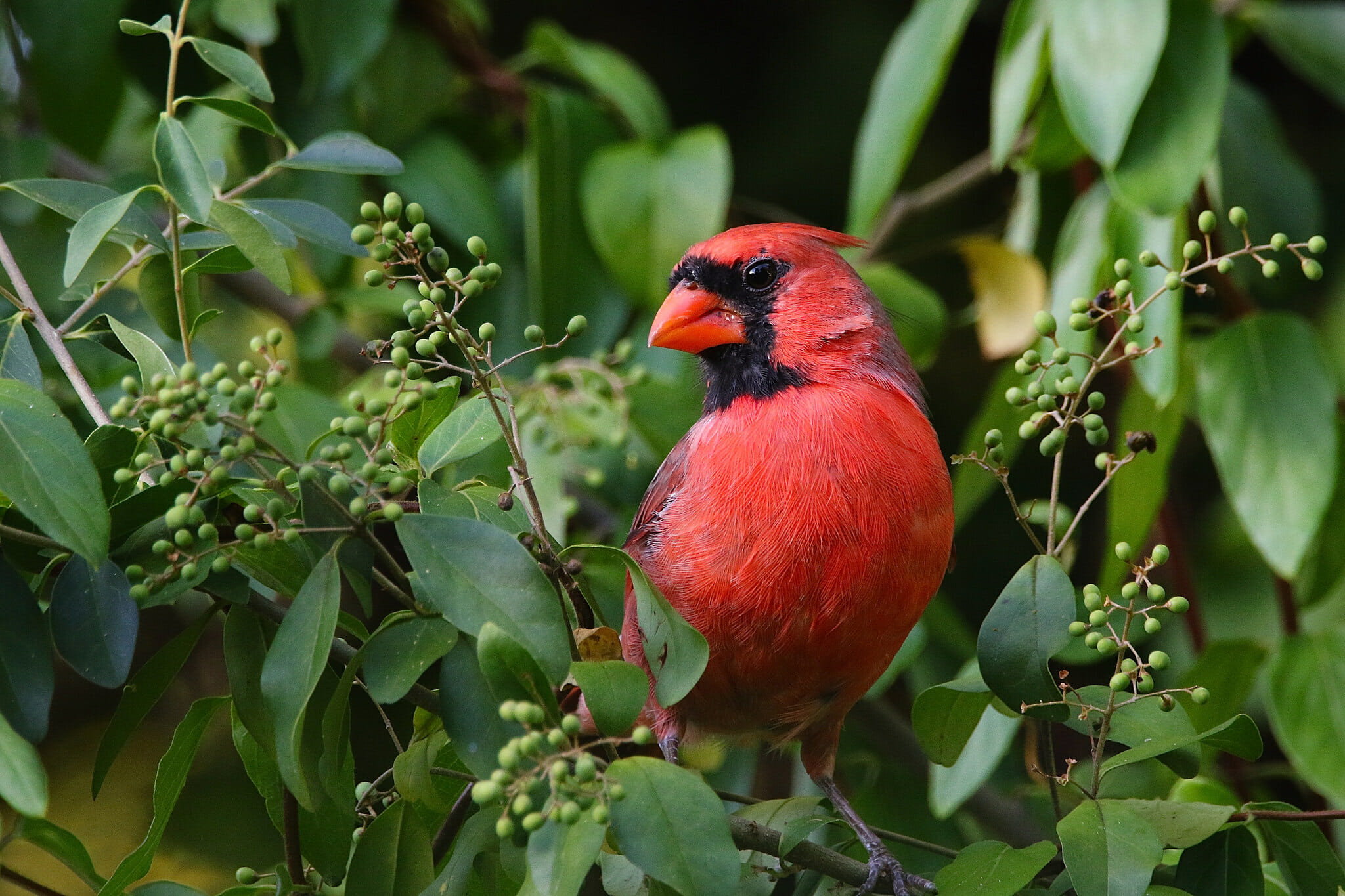 Who doesn’t love northern cardinals? It’s a good thing that they are so popular because they are very common across the south and east of our country and are incredibly easy to identify and observe in the wild. Have you ever been sitting watching your cardinal bird feeder and wondered, or perhaps even your kid has asked you “why are cardinals red?”

Don’t worry if you have because it is probably a more commonly asked question than you think. You see, we all love watching our favorite birds, but never really give much thought as to the biology involved in their coloring. Most just take it as fact that that’s the way it is, without wondering why.

As we hope you will agree from the post, however, digging a little deeper and finding out the why behind cardinal’s color, as well as the color of our other feathery friends is very fascinating.

Did you know, for instance, that the red feathers are a result of pigments that reflect the color red? What’s more, did you know cardinals can’t produce the red pigments on their own without eating specific foods?

A little lost? Don’t worry as we are going to explain all that.

How Birds Feathers Get Their Vivid Colors

Basically, there are two main mechanisms that produce the colors displayed by birds’ feathers:

Each of these mechanisms produces specific colors and they can be combined to form other colors.

Birds feathers’ structural features can function in a similar way to microscopic prisms that scatter, refract and reflect light to give all the individual feathers their colors. This is what provides many birds with the iridescence or blue color they often have.

Whereas, pigments are special substances, that give objects colors in relation to the light wavelengths they reflect and absorb. Take for instance the red cardinal feathers. They have red pigment in them that reflects the wavelength for the color red, which is why we see it, while it absorbs all the other colors.

There are three specific pigments that produce the colors of bird feathers:

How Cardinals Get Their Vivid Red Feathers – Carotenoid Pigments

It’s time to focus on one of the pigments we just highlighted above to discover more about how cardinals get their vivid red plumage. It all comes down to the carotenoids. Along with numerous other yellow, orange and red birds, the cardinal gets its coloring from eating parts of plants, seeds and fruit rich in carotenoids.

It’s no coincidence that carrots are called that name as they are rich in carotenoids and it’s the pigment that gives them their vibrant orange coloring.

Rather than there just being on single pigment, there are a wide variety of carotenoids with differing colors that range from yellow to orange and red. The stunningly bright red berries produced by the dogwood tree is one of cardinals’ favorite foods and these are rich in carotenoids.

The berries are metabolized in the birds along with other red-colored foods rich in carotenoids which are then sent through the cardinal’s bloodstream to the growing follicles of their feathers. Although carotenoids do not give feathers that are fully grown extra color, they do provide new feathers with color.

When a cardinal does not get enough food rich in these important carotenoids, the red hues of their feathers dull when they molt. However, if they are then able to find the right food again, newer feathers will have the beautiful red coloring again.

Male Birds With the Brightest Feathers Attract The Female Birds

The color of the males is what influences the female cardinals into choosing the right mate. In the cardinal’s world, males with bright red feathers are considered to be healthy and fit, as they must be able to find the protein and carotenoid pigment-rich food to look so good. It is also a sign that he is probably going to be better at holding his own to secure his territory and provide better care for his young.

A male with duller colors could be a sign that he is not as healthy or strong as others to help him establish and retain a reasonably sized territory so he has access to the best food, not just for him, but also for any future mate he breeds with and their subsequent chicks.

Although this correlation between fitness and color is strongly upheld in rural areas, the same cannot be said for urban environments. As there are a few other factors that could play a part in how red male cardinals are in these areas. Although there tends to be a lot more Amur Honeysuckle available, a plant that many berry-eating birds, including cardinals, love, it may not be all good for the cardinal.

This plant does have high levels of carotenoids but does not really have the right levels of fat and protein to really keep cardinals healthy.

Conversely, sunflower seeds are used often in cardinal bird feeders and many cardinals love them. True, they are extremely high in fat and protein, but sunflower seeds lack the appropriate levels of carotenoids. The result is that cardinals what tend to eat a lot of sunflower seeds often have duller feathers and coloring than birds that eat other food. Even if they are still incredibly fit and healthy.

Why Are Male Cardinals Red And Female and Young Cardinals Brown?

You will notice that although healthy males are vibrantly red in color, the female and younger cardinals have a more muted hue. Females in general are pale brown with slight accents of red on their tail, crest and wings. The young cardinals tend to have just a bit of red on the tail and their wings.

This is for their own protection. As noted above, male cardinals need to be as bright red as possible to secure mates. Females and chicks on the other hand need to be able to camouflage so they are protected from predators.

On occasion you may come across a pale or even white bird that resembles a cardinal but looks as if it has been whitewashed. Leucitic and Albino cardinals are those that lack sufficient melanin pigments, meaning their feathers have a light or even white coloring. If they still have a rich supply of carotenoid pigments, though, they will have a unique but pretty and gentle pink color.

Cardinals that are genuinely albino can’t produce any melanin, meaning their skill and feathers will both lack pigmentation. As their eyes will also be affected, they will look red.

Unfortunately, albino cardinals don’t tend to have long lifespans when living in the wild because their eyesight isn’t strong enough. Melanin is important to vision and helps to protect them from the harmful UV rays from the sun.

Leucism is a curious condition that causes the affected animal to lose some of its pigmentation. This can result in them having patchy, pale or even white skin and feathers. It doesn’t affect their eyes, though.

Do Cardinals Get Redder in Winter?

Cardinals suffer from feather wear every year during wintertime. What some birdwatchers are puzzled by, and if you have experienced this as well, we want to hear from you, is why it seems as if some cardinals get redder during winter.

If they are actually redder than usual, there are two theories – it could simply be that there is a greater amount of red pigment in the feathers that increases the intensity of that handsome red color or it could just be that it is whatever they ate before the molted during the summer and fall seasons.

We’ve covered this elsewhere on BirdWatchingBuzz, but it was worth listing it as part of this article as it relates to color.

There are some northern cardinals that are not red at all, they’re yellow. You can find out more by reading this article, but it appears to be caused by a genetic issue known as xanthochromism, which basically means they have lost much of their darker pigments making the yellow colors more pronounced or they have an overload of yellow pigment.

There is also the thought, however, that it could be down to a dietary issue, where birds are not getting the sufficient amount of carotenoid-rich foods.

Have You Ever Seen the Black-Headed Punk-Looking Cardinal?

Another rare curiosity that you may come across in your birdwatching adventures is a cardinal that is rocking a vulture look with most of their feathers missing from their head. What causes this?

There are two lines of thought:

There is strong evidence to suggest that the former rather than the latter theory is more likely the truth. Often, these punk-inspired cardinals still have crests.

So, there you have it folks, you now know a little bit more about why cardinals are so red. It’s a fascinating subject and hopefully we didn’t dumb down the science too much for the scholarly types and didn’t overload those who would rather skip the biology lesson with too many boring facts.

Have you ever seen any of the curious alternatives to the standard red cardinal? Let us know in the comments section!