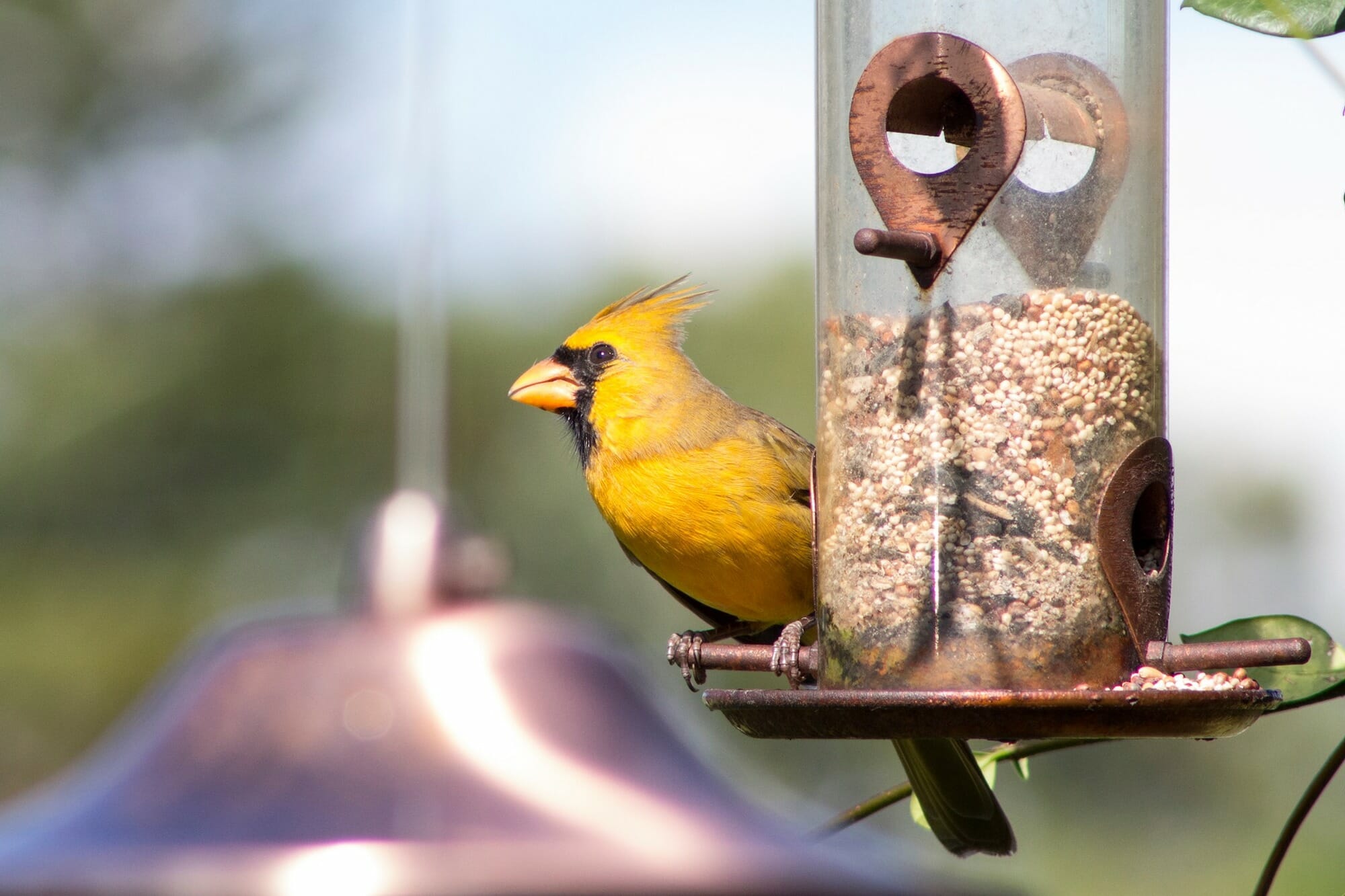 When reading the question posed above, any self-respecting birdwatcher may suggest that we were obviously having a silly moment when we came up with the title. Northern Cardinals are red, you are probably shouting at your computer screens.

The only real Yellow Cardinal is not native to North America, so unless it has rerouted itself for some unspecified reason and flew to the north to live, it’s not that. (More on that later.)

For the most part, you would be right. However, there have been some cases of sightings with photographic evidence of yellow cardinals. Are these just a hoax or are they real?

Let’s look a little closer at this interesting subject.

What Colors Are Cardinals?

Just to be clear, normally cardinals are red. The males have red feathers all over their body, a red bill and black face. They are not yellow, there is not even a hint of yellow in their plumage. Females, while not as red, have a paler brownish color with little red touches in their crest, tail and wings. They too have an orangey-red bill and a black face. They are not yellow.

So, you are right to be perplexed. I mean, the hint is in their name – cardinal, after the Roman Catholic cardinals who wore red robes.

However, that doesn’t really explain how a birdwatcher, Charlie Stephenson in Alabaster, Alabama spotted a bright yellow northern cardinal. She was obviously very perplexed and another local, Jeremy Black, took a photograph of it, which went viral (as things like this tend to these days).

What Causes a Yellow Cardinal?

This is where the subject gets even more fascinating as there appears to be a couple of different theories as to why some red northern cardinals are yellow. According to an ornithologist and expert in coloration based at Auburn University it could be a genetic mutation. Geoffrey Hill consulted with Charlie Stephenson regarding the surprise find and his suggestion was that the genetic mutation caused the bird to take yellow pigments from food rather than the red it should.

The condition that he believes is responsible is known as Xanthochroism, which causes the pigments that would normally be red to be yellow. It is believed to affect other species of cardinals, as well as eastern house finches and possibly even evening grosbeaks.

That is just one of the theories, however, as another expert called Geoff has a slightly different take on the matter. This Geoff is Geoff LeBaron, the director of the Christmas Bird Count in Audubon. He suggests that as the wing and crest feathers of the yellow cardinal in question look frayed it may relate to diet or their habitat.

While it is normal for some wear and tear to occur throughout a bird’s lifespan, he argues that it is more likely to be diet and stress related. With those kinds of health issues, birds could, in theory change how the carotenoid (the pigments found in plants that turn feathers either orange, red or yellow) are displayed. Even LeBaron feels genetics could be the main cause.

How Common Are Yellow Cardinals?

You may wonder then, as we’ve seen that there are indeed yellow northern cardinals, how likely you are to see one. According to Geoffrey Hill, they are so rare that the chances of seeing one of these birds is ‘one in a million’.

And he would know, as an expert in birds who has observed many thousands of wild birds, including norther cardinals.

To make things even more confusing, it’s important to point out that you don’t mistake the genetically mutated (red) yellow cardinal for the Yellow Cardinal that originates from South America.

This cardinal is also rare and is found in Uruguay, Argentina, Paraguay and Brazil.

Unfortunately, this is rare not because of any genetic mutation or pigmentation issue. Its population has declined significantly thanks to illegal trapping to supply the high demand for caged birds. That and the loss of their habitat, has seen the species suffer and there is now thought to be as little as 1,000 in the wild, according to BirdLife International.

So next time you are out in the backyard or even the countryside and you swear you saw a cardinal wearing a yellow coat, the chances are very slim that you did. However, as we’ve discovered, it is unlikely to be one, but that doesn’t mean it is impossible.

If you do, be sure to take a few pictures and send them into us!