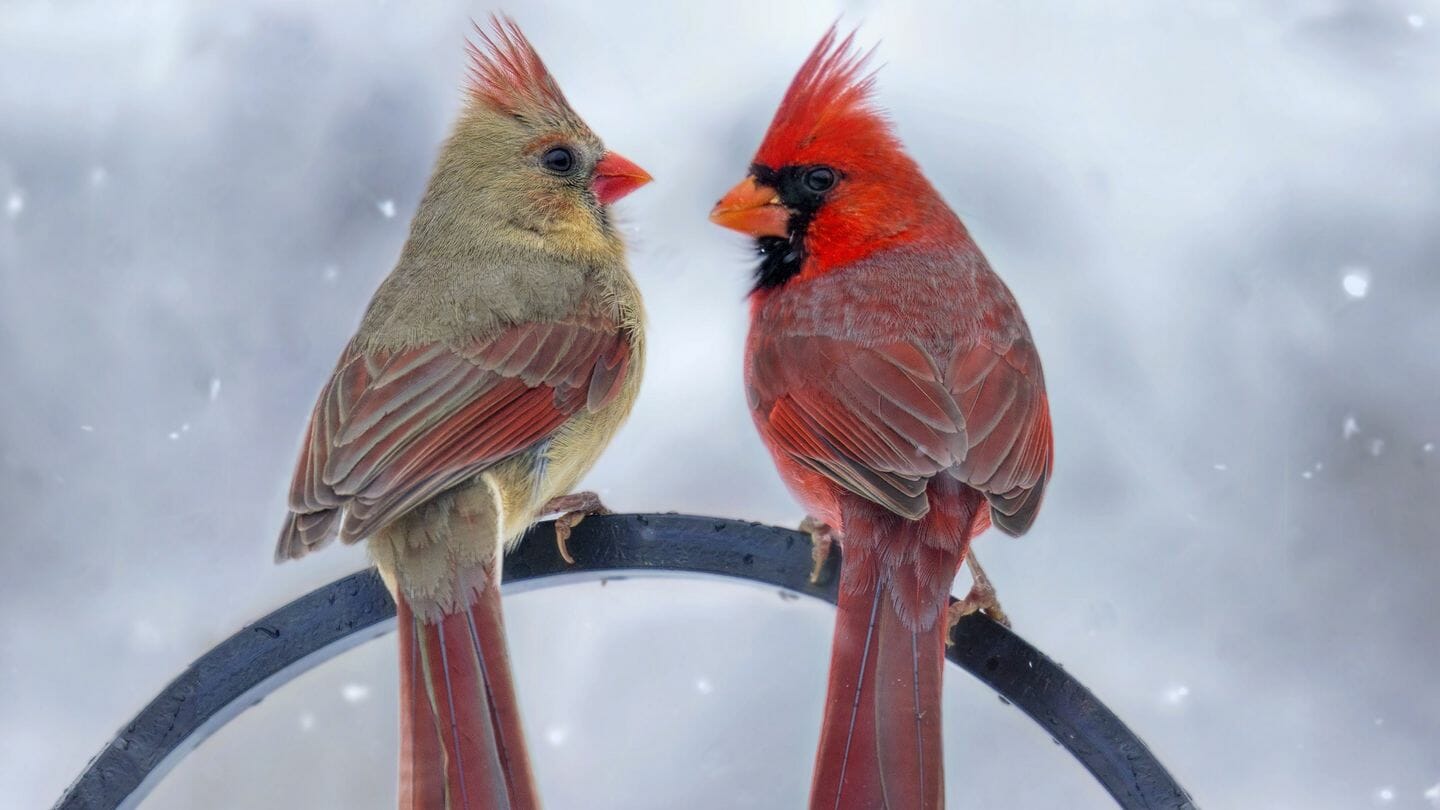 I don’t know about you, but when I am watching the birds congregating at the various backyard feeders, like the cardinal bird feeders I have set up, I am always curious to know what gender they all are.

Compared to other species where it is sometimes very difficult to figure out the gender, Cardinals are incredibly easy to pick out the males from the females. 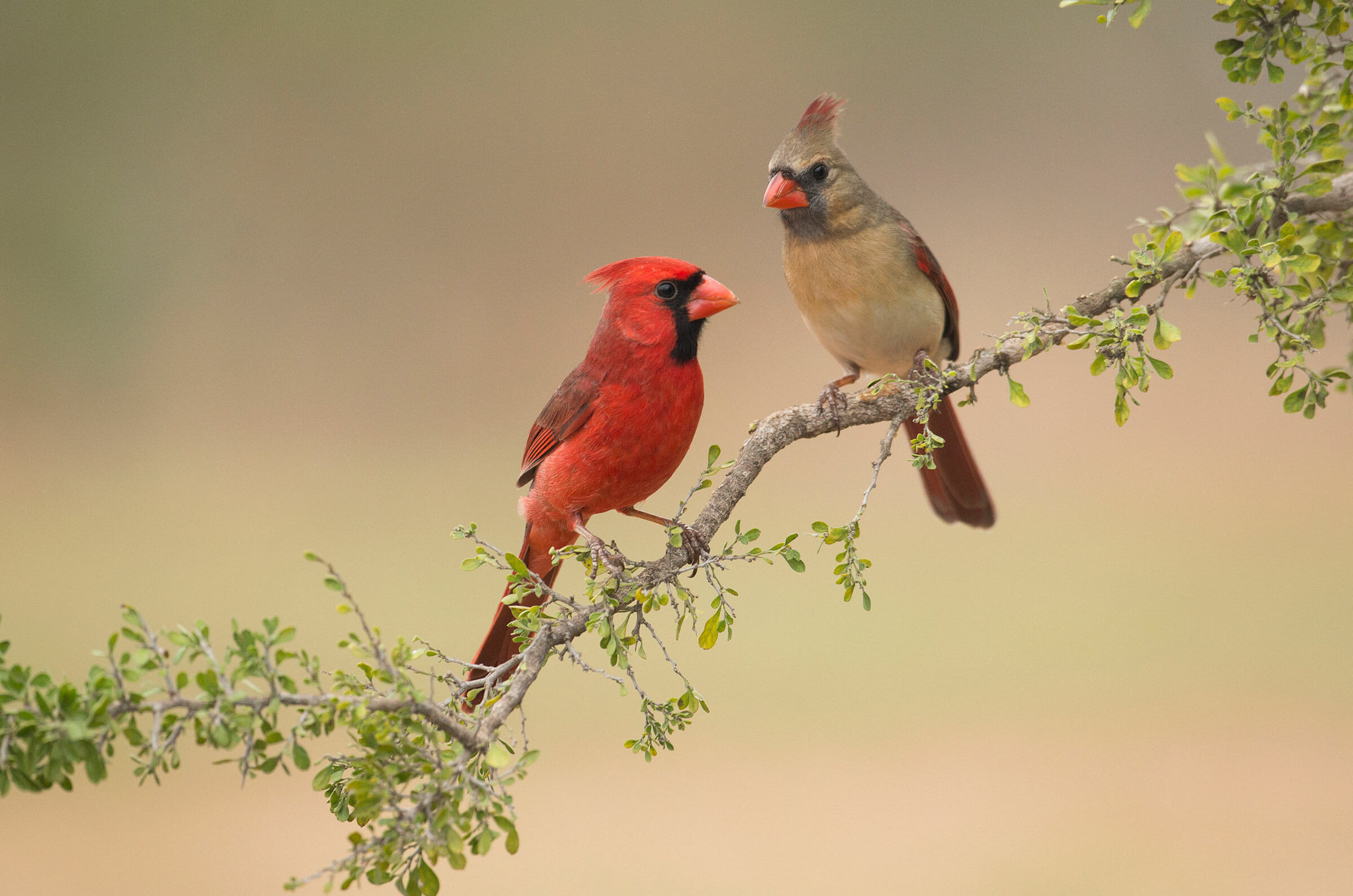 It makes sense that as cardinals are songbirds, at least one half of the gender divide would be adept at holding a tune.

Cardinals are different many other types of songbirds, as both male and female birds can sing. Despite this shared talent, they have different levels of ability and skill when it comes to singing.

When a male and female cardinal become a breeding pair, they mate for life. Within their relationship, both partners have specific roles and duties.

As a final note, after looking at the major differences between male cardinals and female cardinals, there’s one exception we need to discuss.

Can a Bird Be Both Male and Female?

The short answer to this is that yes, birds on some occasions can be both male and female. According to NBC News early 2018, a couple, Shirley and Jeffrey Caldwell, they spotted and snapped the strangest cardinal they had ever seen.

What was so strange about this cardinal? Half of its body was red, while the other was tan. Not only that, but the colors were split down the middle. It looked like two birds had been sewn together.

Sound impossible? There is a scientific name for it.

Let’s explain this in a bit more detail. 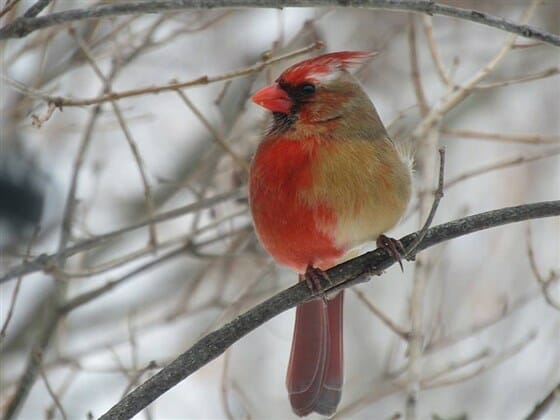 Basically, a creature that is half female and half male is referred to by scientists as being a gynandromorph. The interesting thing is there are a number of different animals and birds, including chickens and some insects that are gynandromorphs, but they are not always easy to spot.

Given the aesthetic differences there are between the male cardinals and female cardinals, gynandromorphs are much easier to pick out among cardinals.

With birds it is similar, they have sex chromosomes. However, they act in the exact opposite way as they do in humans. Female cells have a W and Z chromosome, while male birds have 2 gene-rich and very large Z chromosomes.

The very small W chromosome is what remains of the original Z chromosome that has degenerated over the course of time, similarly to what happens with the human Y chromosome.

According to experts if you were to take a sample of the chromosomes present in cells from the mid-line where there is the split in a gynandromorph, you would find a combination of female and male chromosomes.

Before you start thinking that in the current climate it might be a good idea to refer to gynandromorphs as intersex, it’s probably best to avoid it as it is not possible to compare the kind of cell mutations that occur inside birds with anything that occurs inside humans.

So, the next time you are watching your cardinal bird feeder and think for one moment you are looking at a male cardinal, only discover when you get a better look that it might be a female cardinal. You know what it is. It’s a gynandromorph and you should consider yourself to be most fortunate, as they are a rare sight to behold.

If, therefore, you have ever come across a gynandromorph cardinal, or any other gynandromorph bird, we’d love to see a picture of it!