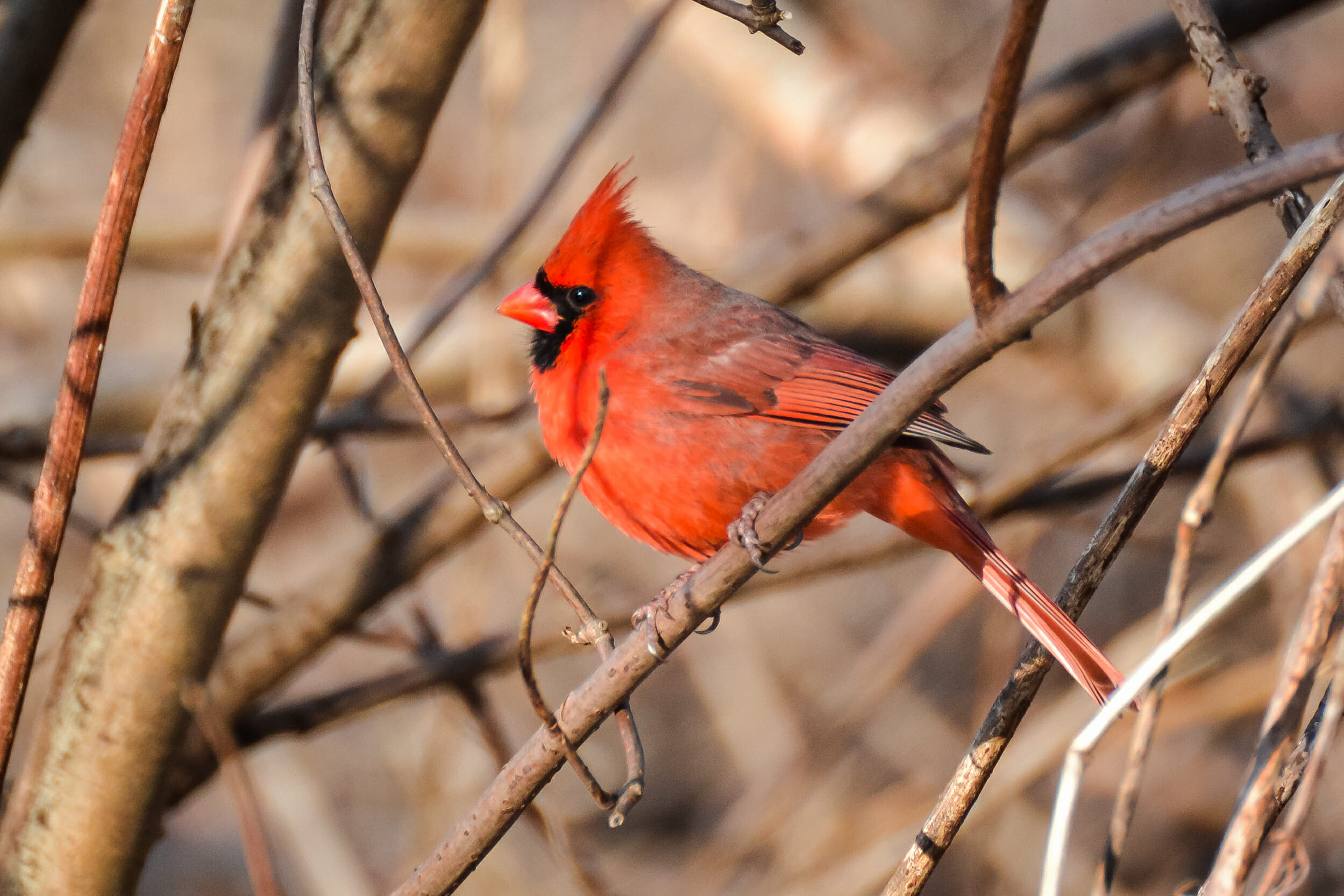 Most birdwatchers young and old are familiar with the northern cardinal. It’s likely that you know what they look like and even what they sound like. You may even know that they are the one species of bird that is the state bird for more states in America than any other.

What you may not know, like so many other people, is the curious and utterly fascinating details of their nesting, mating and egg laying habits. As the title suggests, we are going to explain when they lay their eggs and what is involved in getting to that stage.

When do cardinals lay eggs? Cardinals lay eggs during the breeding season, which starts in March and runs to late September. They lay eggs 2-3 times a year and on average each female lays between 3-4 eggs, white in color with dark blemishes on them.

For anyone that is just looking up information about the birds, we’ll cover some of the basics before getting down to the serious business of cardinals nesting habits.

Northern Cardinals, both the female and male birds, have thick cone-shaped and bright orange-colored beaks, a pointed feather crest on their heads and a long tail.

As the name suggests (they were named after cardinals from the Roman Catholic Church, as they wear very distinctive red caps and robes.) the male birds have bright red feathers all over their bodies apart from over their face, which is black.

This mask covers over their throats, surrounds their beak and covers their eyes and looks a little like a mask.

Although the name represents the red in their coloring, the female birds are a light brown color with tails, wings and a crest that has a reddish tone to it. They have a smaller black bib and mask.

Where Do Cardinals Live?

As the northern part of their full name suggests, cardinals are found across central and eastern North America, southern Canada and even into Mexico and various places in Central America. They live in various kinds of habitats such as riverside thickets, swamps, woods and even residential areas and city gardens.

If you are a backyard birdwatching enthusiast, you can entice them with a cardinal bird feeder. They tend to build their nests on top of the branches of thick shrubs and bushes. More on that later.

So, now we know a little more about the background, what about the question we posed at the beginning – when do cardinals lay eggs. The mating and reproduction, as it is with many birds, of a cardinal is a fascinating subject. Well, we think it is! 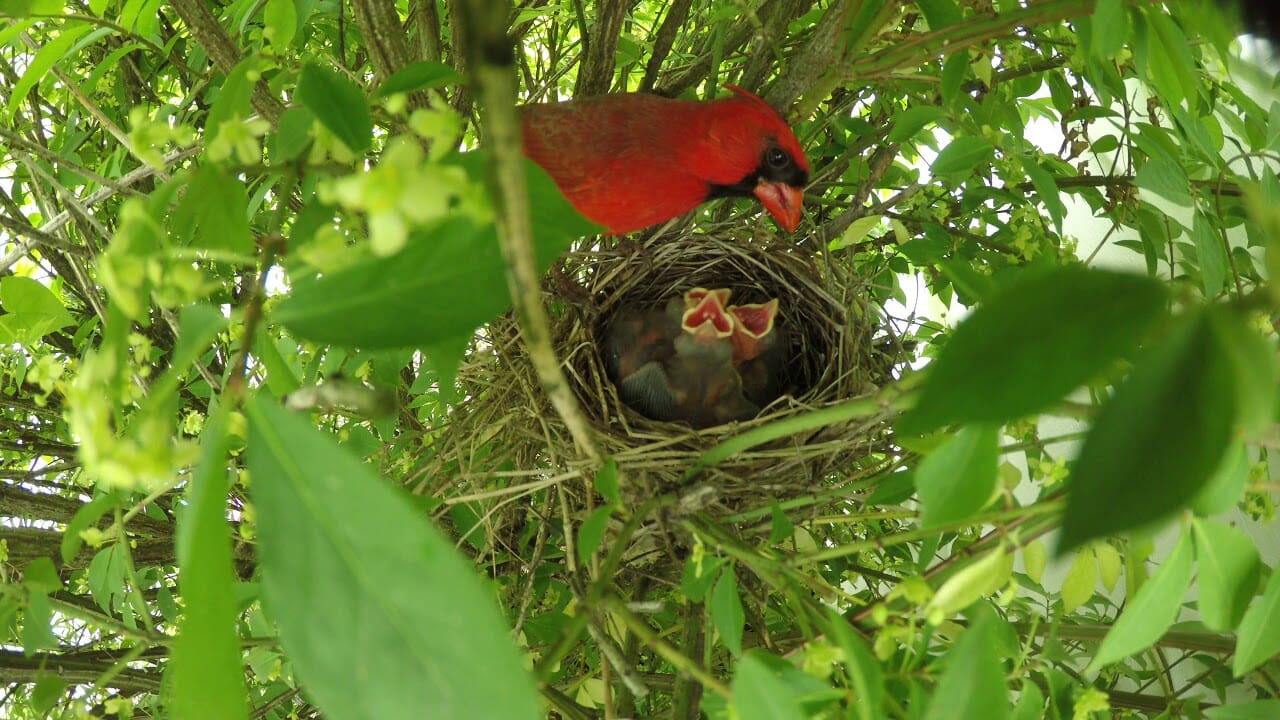 Cardinals are a monogamous species of bird, meaning they pair up, one male to one female. This does not always mean they mate for life, as it is not unusual for them to choose different mating partners every breeding season.

It is during spring when they start to pair off into breeding pairs. This involves a spectacular courtship display by the male who shows off his vibrant red feathers and crest by raising the crest and swaying from side to side while singing the softest song.

When it works and he secures a breeding partner, he will then do the rather sweet thing of feeding the female. This is not just some sort of romantic gesture, but rather it is a way for him to show his new mate he will provide food for their young.

What Time of Year Do They Mate?

Breeding between cardinals can take place at any time from March through to September. Although it is generally the case that they raise two broods over the course of a year, more prolific breeders have been known to produce three or even four.

The first is usually around early March, while the second often falls between May and July.

A couple of weeks before building can commence, the female along with the male cardinal looks for suitable areas to establish a nest.

After they have courted, mated and chosen a spot to setup their nest, it is the female cardinal that is mostly responsible for building the nest, collecting rootlets, weed stalks, grasses, bark strips, some leaves, vines and twigs and lines it with finer grasses. The male will often help by bringing nest material to their mate.

How Many Times a Year Do Cardinals Lay Eggs?

As noted above, they generally lay eggs between 2 and 3 times a year. Each time the female will lay 3 or 4 eggs. They have a whitish green color and stay incubated for anything between 11 and 13 days. During the incubation period, the male collects food and brings it to his mate.

Once the cardinal chicks have hatched, the mother broods them for those first couple of days of their life. Both the male and female feed the chicks insects. 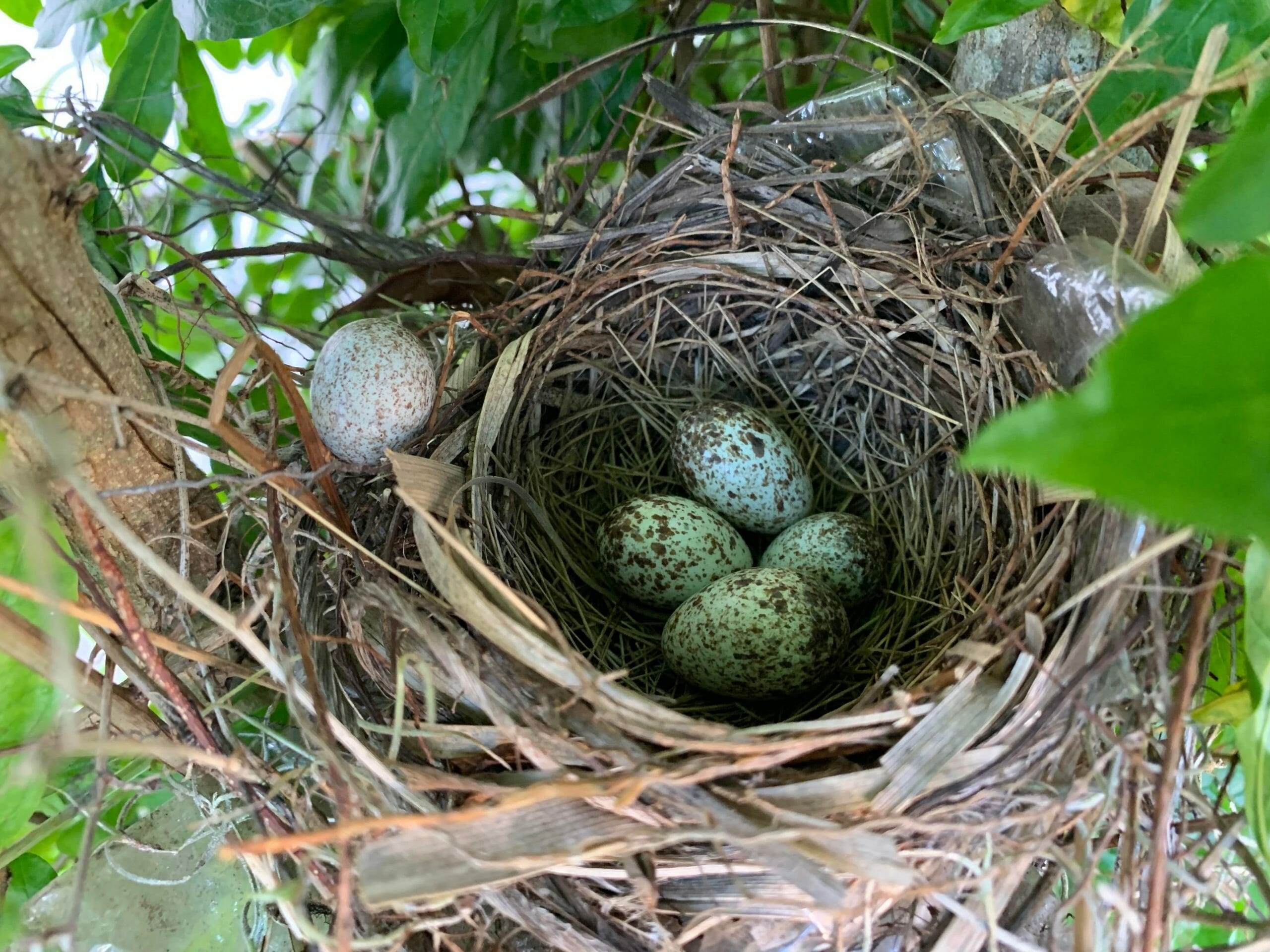 How Long Do Cardinal Chicks Stay With Their Parents?

Although the chicks start to venture outside of the nest once they are 9 to 10 days old, their parents still feed them for between 25 and 56 days until they have learned how to feed themselves and are fully independent. It is normal for young cardinals to join up with flocks of other young cardinals, readying themselves to start breeding when the following spring arrives.

What is the Lifespan of a Cardinal?

So, if you are looking to encourage them to come and visit your backyard and want to set up cardinal bird feeders, you now know that they breed and lay eggs between May and September.

Interesting Fact
Although any bird feeder will attract Cardinals, they seem to like sunflower seeds more than anything else.

To encourage cardinals to breed and nest in your backyard, another great tip is to keep some undergrowth around the edges.

We hope you’ve found this insight into the nesting, mating and egg laying habits of cardinals interesting. They are a spectacular bird Let us know how you get on!