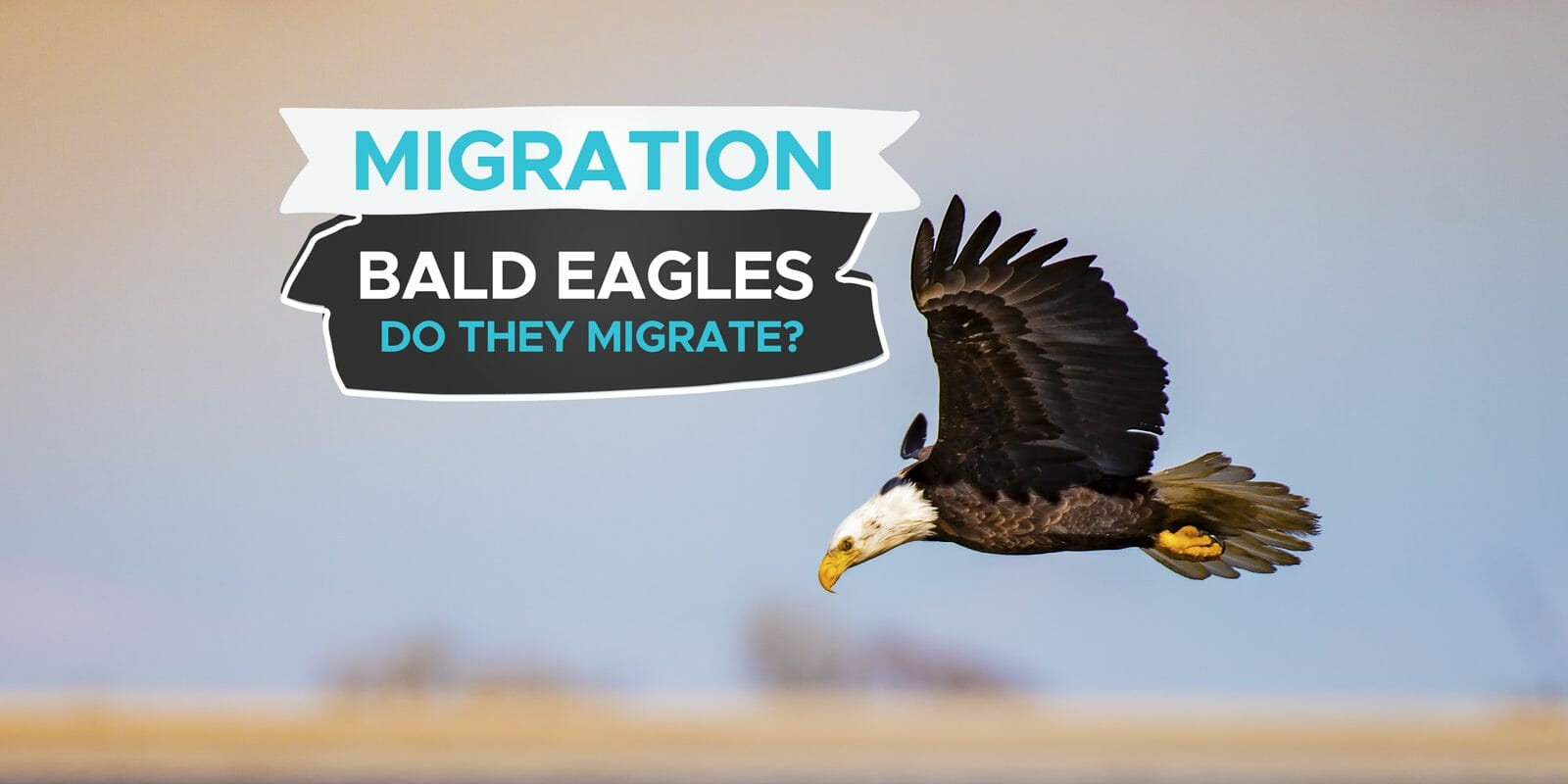 Bald eagles are found all over north America and Canada with a large population in Alaska. But, have you ever wondered whether bald eagles migrate?

The simple answers is some do and some don’t. If bald eagles live in an area where there is plenty of food and water available all year round, then they’re inclined to stay put. In other instances, bald eagles will migrate south during the winter or to coastal areas where food sources are more abundant.

Let’s look at some of the reasons that some bald eagles choose to migrate while others choose to stay in the same area.

Common Facts About Bald Eagle Migration In The Fall

The most common reason for bald eagles who normally live in Canada and the northern United States would migrate south is to search for food. In late fall and early winter, many northern lakes and rivers will freeze over. This means that bald eagles are unable to hunt for fish. Therefore, they will migrate in order to find easier food sources.

Here are some other common facts about bald eagle migration. 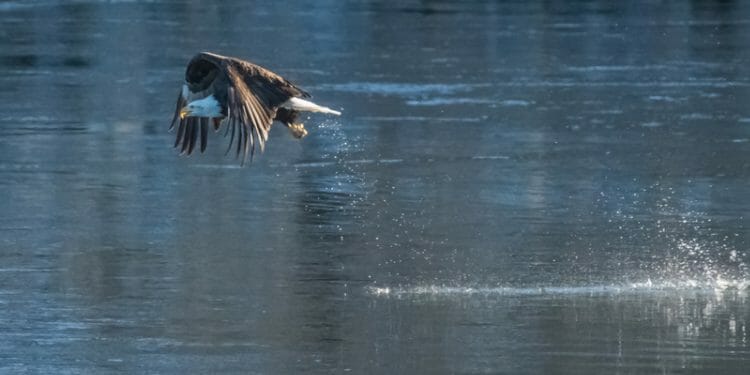 The Difference In The Migratory Patterns Of Northern And Southern Eagles

The main difference is that most southern eagles do not migrate at all as long as their territory has plenty of food and water. It’s also interesting to note that bald eagles who live in Florida actually nest and raise their young during the winter months. This is because it’s just too hot during summer.

Sometimes, the juvenile eagles will then head north in late spring and summer to find suitable nesting sites of their own. However, many of the adult eagles will remain in their Florida home all year round.

On the other hand, northern eagles don’t have any choice but to move out of their territory because  all the waterways freeze over in winter and, hence, they are not able to fish. Northern eagles will start to move south around November to live out the winter in southern areas where suitable food sources are available. Then, around late March, they start to head north again for the breeding season.

Interesting Fact
Bald eagles use rising currents of warm air to help them to glide along. This soaring requires very little wing-flapping and means that eagles can travel longer distances while conserving their energy. 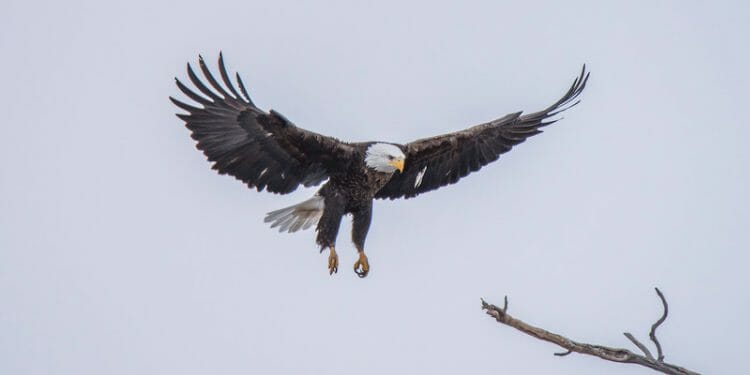 What Are The Main Factors That Contribute To Whether Eagles Migrate Or Not?

Primarily there are three main factors that determine whether a particular bald eagle will migrate or not. These are the availability of food, the age of the bird and where it normally nests. Let’s look at each of these factors in more detail.

Research studies have found that young birds are more likely to travel further from where they were hatched than adult birds. They’ll also leave their nesting site much earlier than their adult parents.

These young eagles are obviously on a journey to find their own ideal nesting site and this first journey will help to establish a migratory pattern for them. Bald eagles tend to follow the same migratory path year after year although they will travel shorter distances as they age.

Once these birds reach maturity at around 5 years of age, the distance and path that they travel will remain consistent for the rest of their lives. It’s interesting to note that adult eagles will return to the same nesting site every year. For this reason, they’ll travel the same path and use visual clues to find their nesting area.

Those eagles that nest in the northern parts of the country and in Canada will find that their local food sources dry up or become very scarce. This is due to the extreme cold, snow and lakes and rivers that freeze over.

This necessitates the need for these birds to find areas where food is more readily available. These birds don’t always head south but, instead, they head for the nearest available food source. This could mean that they travel west toward more temperate areas where the waterways are open and especially where there are plenty of salmon available.

In fact, a lot of these birds will head to areas like Colorado because the lakes and reservoirs do not freeze over as early as those further north or east. Plus, they’ll also begin to thaw much earlier.

Another benefit is that these eagles can also find other prey such as migratory water birds, rabbits and prairie dogs. 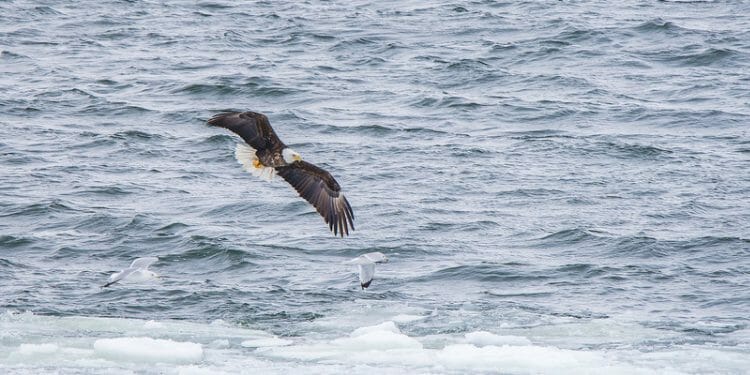 3. Where They Normally Nest

Bald eagles that normally nest in more temperate areas like Colorado or warmer areas such as Florida, have no reason to migrate at all. Therefore, they will stay in the same area all year round.

This is because they have already established their nesting territory and there is plenty of food availability to sustain them over the winter months.

Where do bald eagles go in the winter?

In winter, bald eagles prefer to go to coastal areas and close to large lakes that are not frozen over.

Do eagles stay in the same area?

Some eagles do prefer to stay in one area especially if there is plenty of food available. This applies to areas such as southeast Alaska and coastal regions like Chesapeake Bay and Maine.

How far will a bald eagle travel from its nest?

A young eagle that has left the nest will usually only travel up to 250 miles away from where it was hatched.

How far can an eagle fly without stopping?

Studies have shown that an eagle can travel as many as 225 miles in just one day.

To answer the question about whether bald eagles migrate is not easy. This is because some will and some won’t. It all depends on where they normally live and where their nesting sites are. Plus, the age of the bird is also a defining factor.

Bald eagles that nest in the northern parts of the country and in the colder regions of Canada, are generally forced to migrate because of the lack of available food sources. Bald eagles prefer to feed on fish and when the rivers and lakes freeze over, they are unable to get to their favorite food source. This means that these eagles have to migrate toward the coast to find unfrozen waterways where they can continue to fish.

On the other hand, bald eagles that nest in the southern parts of the country do not have to migrate because they have a constant availability of fresh fish that they can feed on. Interestingly, birds that live in warm areas such as Florida will actually nest and raise their young during the winter months when the weather is cooler.

It’s also common for young birds who have not reached maturity yet to migrate as they search for suitable nesting sites. In the beginning, some of these juveniles may fly some distance from where they were hatched while others may prefer to stay closer. To this day, no one has been able to determine why this is the case.