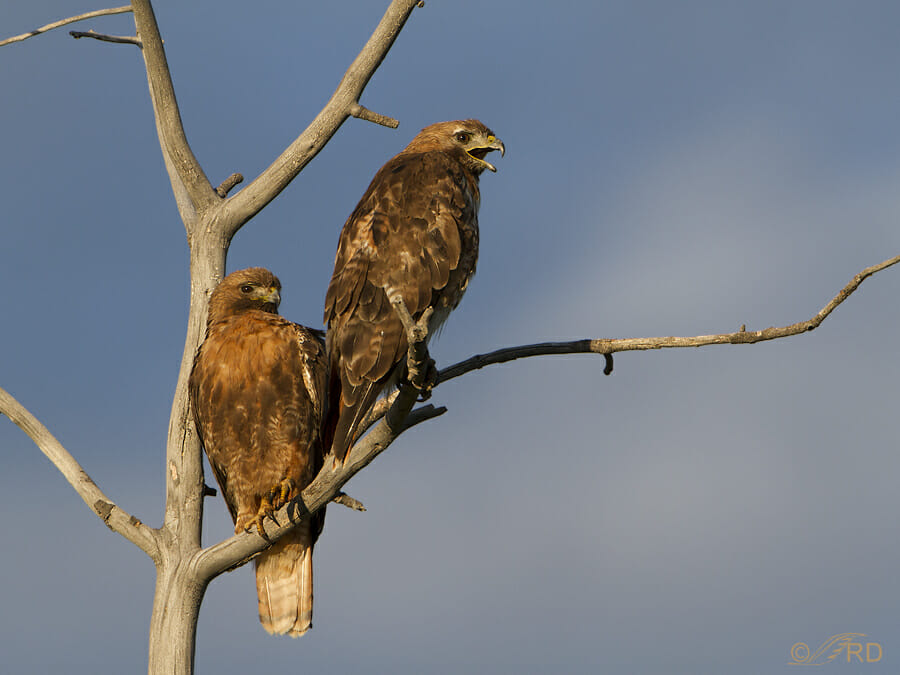 The reason why it is a more difficult question to answer for other bird species is because many have a misunderstanding of mating for life and monogamy. Read on to learn more about the breeding habits of hawks and how it differs from other birds.

Do All Hawks Mate for Life?

Hawks mate for life if the conditions allow them to. If a male and female hawk pair are in the same habitat every breeding season then they will remain monogamous.

However, this is not always possible. There are several factors that can prevent a hawk pair from remaining monogamous throughout their life.

First of all, most hawk species are solitary creatures. This means that they only live with others during migration and breeding season.

Many other bird species do not seek out the same partner in the next mating season. However, some species do pair up with their partner during breeding season, just like hawks.

Hawks are Monogamous During Breeding

Both male and female hawks take responsibility when nesting and taking care of fledglings. This behavior is what initially made people ask if hawks mate for life.

Both parents contribute to building the nest, usually on a high up perch at the edges of woods. Their nests are quite larger, between 24 – 30 inches in diameter, and lined with soft materials to protect the eggs.

A female hawk lays between 1 – 3 eggs each breeding season. Unlike other bird species, it is normal for hawks to leave the eggs bare, the female does not continuously roost on top of them.

They do however protect their nest with great vigour, both the male and female. Both parents stay close to the nest the entire time, taking turns to leave for hunting.

Once the eggs hatch, the female stays with the baby hawks as much as possible. In return, the male hawk goes hunting for food for both the female and their newly hatched offspring.

During this entire period, from building a nest to when the fledglings take off, the male and female are monogamous. Male hawks do not mate with other females and do not venture off to other nests.

Do Hawks Return to the Same Nest Every Year?

Hawks are creatures of habit and they are very protective of their habitat. They become very vocal and even aggressive if they spot any intruders near their resting place.

So, it is no surprise that hawks are also very fond of their nest. Hawks do not build a new nest with each breeding season. Instead, the return to the same nest every year.

HAWK CONTENT: Just how long do Hawks live for?

Which Hawk Birds Mate for Life?

Below we get into the specific mating and nesting habits of the most common hawk species.

Do Cooper Hawks Mate for Life?

Cooper hawks mate for life as long as both the male and female are still alive. If one of the bonded pair dies, the other will mate with a new partner.

This species returns to the same area for breeding and nesting but they do not reuse the nest from the previous season. Cooper hawks build new nests every year.

This hawk species prefers areas that are less dense but with larger trees. You may find them in evergreen forests or even certain suburban areas.

Do Sparrow Hawks Mate for Life?

Sparrowhawks are one of the smaller hawk species but there is a significant size difference between the male and female. The female can weigh twice as much as the male which does make for dangerous mating.

Females are highly reliant on the male sparrowhawk during the breeding season which explains their monogamy. Sparrowhawks will mate with the same partner for as long as they are in the same area.

The male brings the female extra food so that she fattens up and is more likely to lay eggs. The male is also the food provider for both the mother and chicks after hatching.

Do Harris Hawks Mate for Life?

Harris’ hawks are unique because they are very social unlike other hawk species. They often live in groups and share responsibilities.

Some groups have a single monogamous pair while other groups practice polyandry. Regardless of whether the adults are monogamous or not, every member in the group helps protect the nest and goes hunting to feed both the female and nestlings.

Another way that Harris’ hawks are different is that they are non-migratory and can breed throughout the year. Since they remain in the same area, the same nest gets reused over and over again.

Do Red-Tailed Hawks Mate for Life?

Red-tailed hawks, the most common type of hawk in the United States, mates for life. They return to the same area during breeding season and mate with the same partner as long as they both live.

This species is highly adaptive but return to the same nest every year. They will reuse the same nest until it is no longer safe for the eggs.

Do Hawks Mate in the Air?

The mating ritual of the red-tailed hawk is quite famous because of its spectacular aerial show. This is also where the misconception of hawks mating in the air comes from.

Hawks do not mate in the air but their pairing ritual does involve aerial elements. After both the male and female have shown off their breeding potential in the air, they come down to land for the actual mating.

The mating ritual starts with both the male and female gliding at a steady height. Then, the male begins to show its skills by soaring to great heights then swooping down low, repeatedly.

During this period, the male and female may scuffle in the air. It can look a little violent as the talons and wings may be involved.

Once they show part is over, the female swoops down to land with the male following her. When the female is on steady ground the male mounts her.

Excluding the aerial show, hawks only mate for a matter of seconds. So, even though it may seem like hawks mate in the air because of their close contact, this is not true. The aerial part of the mating ritual is to show that the male hawk is a suitable partner. The actual mating occurs on steady ground.