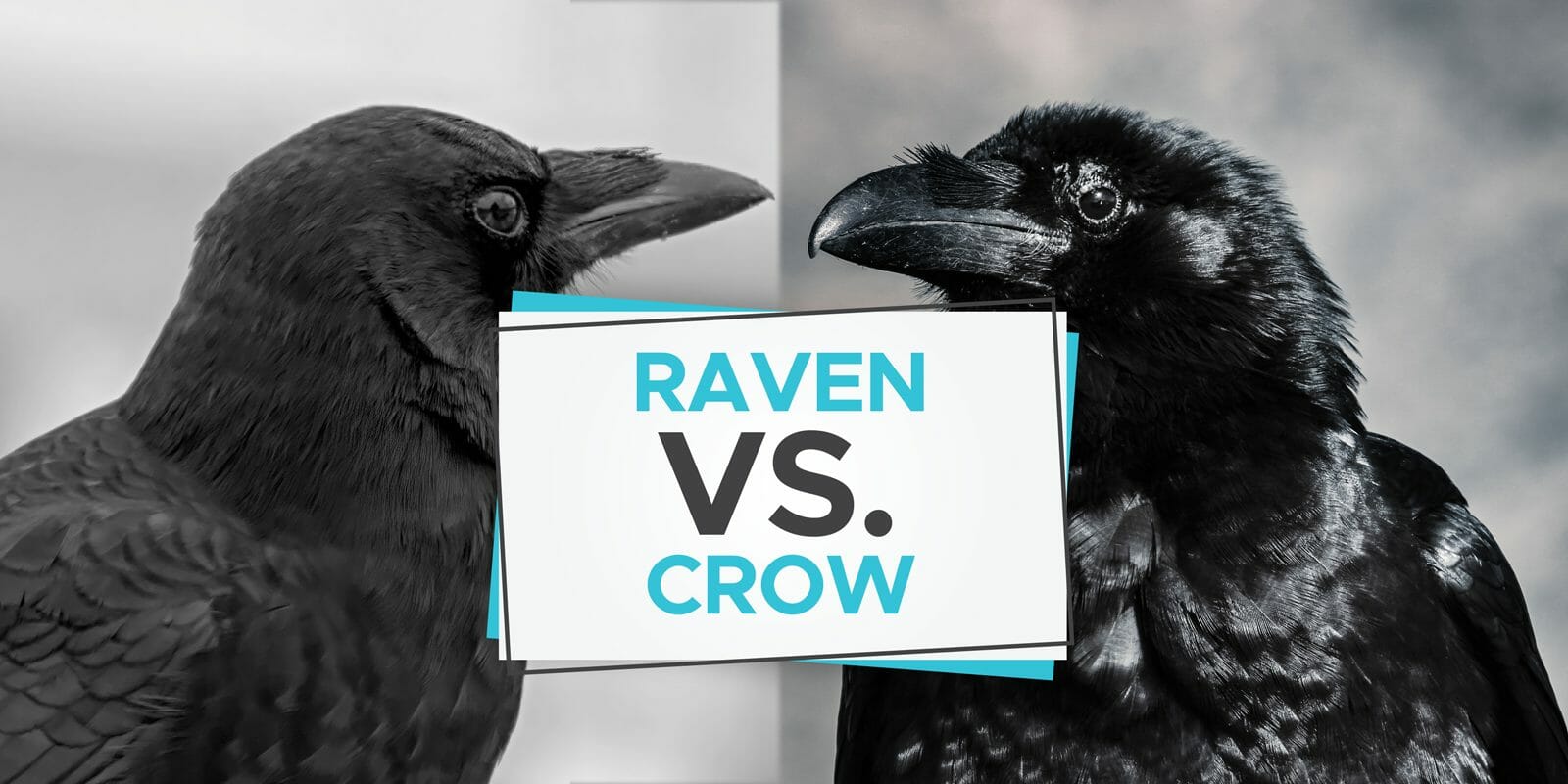 Do you have difficulty distinguishing a raven from a crow? These two birds look so similar that it can be difficult to tell whether you’re looking at a raven or a crow. Even though these two species belong to the same family and share various similarities, there are differences that can help you to tell them apart.

Ravens are often larger birds and tend to congregate only in pairs, while crows are more commonly seen in large flocks. Another difference between the two is the shape of the tail. While a crow’s tail is fan-shaped, the tail of a raven is more wedge-shaped. Of course, this is easier to spot when the bird is in flight.

Let’s examine some of the other differences between these two bird species.

The Differences Between A Raven And A Crow

Ravens and crows are common birds and also highly intelligent. At first glance, it’s easy to get them mixed up but there are some distinct difference between the two birds that can help you to identify each one.

Here’s a chart that lists the key differences between each bird species. 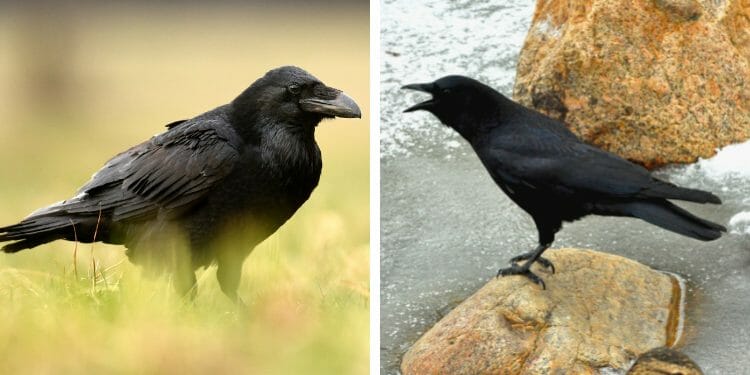 Physical Differences Between A Raven And A Crow

In general, ravens are quite a bit larger than crows. Not only do they weigh more but they’re also longer in length and have a wider wingspan. If you happen to see a raven in flight, you’ll also notice that it has a longer neck.

If you take a closer look at their beaks, you’ll notice that a raven’s is larger and has a curved tip. The top part of the beak is also broader than the bottom section. On the other hand, a crow’s beak is smaller, lacks the curved tip and both top and bottom sections are the same size.

Another key physical difference between ravens and crows are their wings and tail feathers. While a raven has pointed wings and a wedge-shaped tail, a crow has blunt wings and a fan-shaped tail.

Ravens also have large and fluffy throat hackles that crows don’t have. These make the ravens look like they are much fluffier than their crow cousins. 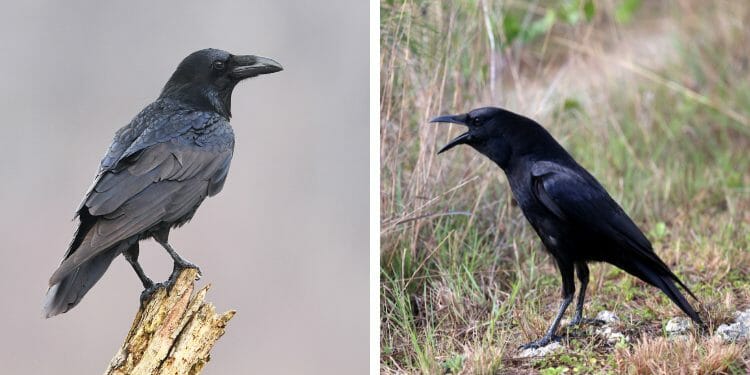 Behavioral Difference Between A Raven And A Crow

When crows fly, they tend to flap their wings a lot and appear quite noisy even when in full flight. These birds really do like to make their presence known. However, you will notice that their wings don’t make a sound when they flap.

Ravens, on the other hand, like to soar and glide through the skies, much like eagles and hawks. Similar to birds of prey, ravens will ride the thermals and rising air currents as they glide through the sky. They also fly around quietly and are not nearly as attention-seeking as crows. However, when they do flap their wings, you’re likely to hear a swishing sound.

Crows are also very social creatures and tend to enjoy interacting with humans. They’ve been known to form special relationships with people who constantly feed them. In some instances, they’ve even been known to bring gifts to their human friends.

Being highly intelligent, crows are very good at problem solving and can even make their own tools to help them get food. Through various different tests and experiments, it’s been proven that crows do actually possess logical thought and will learn different tasks at the same rate as a 7 to 10 year old child.

Interesting Fact
It is even believed that crows can actually remember and recognize people’s faces.

Ravens, on the other hand, are not as social as crows and don’t tend to hang around urban areas. They prefer a lot more solitude and are often seen alone or in pairs.  However, they are just as intelligent as crows and equally good at problem solving.

This makes it impossible to say that crows are more intelligent than ravens.

It might also interest you to learn that crows and ravens generally don’t hang around with each other. Sometimes, their territories might overlap but each species prefers to stay distant from the other under normal circumstances. 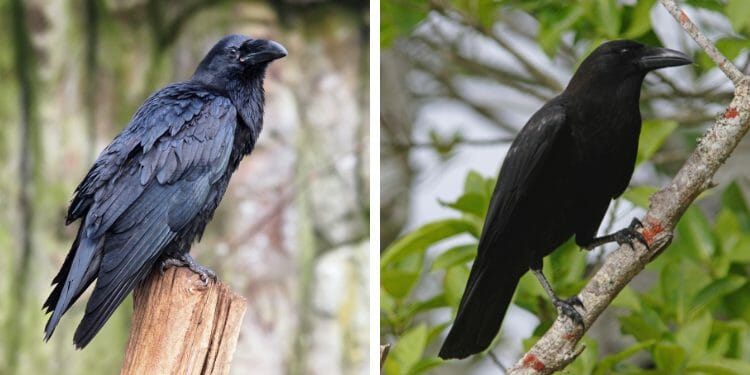 When you compare the calls of a raven and a crow, you’ll immediately be able to identify which bird you’re actually hearing. A crow has a noisy and persistent caw that is fairly high-pitched. And, it’s not just a single caw. A crow gives a high-pitched and nasally long caw followed by a whole series of shorter caws.

On the other hand, a raven has a much softer and deeper-toned croak. A raven is also not as persistent as a crow when it comes to vocalization. It only lets out a couple of croaks at a time and they’re certainly not as ear-piercing as a crow’s calls.

Dietary Differences Between Ravens And Crows

While ravens prefer to forage for food in the wild, they will visit garbage dumps to find scraps for any easy meal. However, their main diet consists of small mammals, birds, amphibian, reptiles, and carrion from sheep and cattle.

Crows will also feed on carrion but their diet will also consist of fruits, nuts, seeds, earthworms, frogs, mice, small birds and even bird eggs.

Groups Of Crows And Ravens Have Different Names

Just like crows and ravens are completely different species, a group of these birds is also named differently. A group of ravens is usually called an “unkindness” or a “conspiracy”.

On the other hand, a group of crows can be referred to as a “murder”, a horde, muster, mob or parcel.

Some Similarities Between Ravens And Crows

You now know that ravens and crows belong to the same family but their similarities don’t stop there. Both species are highly intelligent and really good imitators. They also have excellent problem-solving skills and will use tools to help them get food.

Both crows and ravens mate for life and both species are non-migratory. Although crows tend to form large family groups, ravens prefer to spend their time in pairs. But, nevertheless, they do stay with the same mated partner until one of them dies.

According to scientific studies, both ravens and crows have “theory of mind”. What this means is that they can anticipate what other animals and humans are intending to do. This allows these birds to exhibit unusual behaviors not often seen in other bird species.

For example, ravens can be quite playful when they’re in the mood. They have been witnessed displaying playful behavior while flying around such as flying upside down and doing somersaults in mid-air.

Even more interesting is the gift-giving behavior exhibited by crows. When humans feed wild crows regularly, they’re often rewarded by the birds bringing them various gifts. This would indicate that these birds understand the simple act of reciprocation. In other words, it’s believed that crows bring gifts both as a thank you for the food as well as an anticipation that more food will be forthcoming. 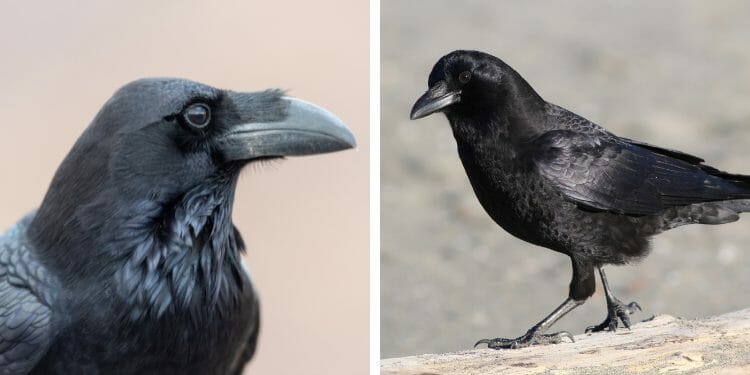 Ravens And Crows Have Similar Predators

Both ravens and crows have to be wary of a number of the same predators, primarily birds of prey. Crows are particularly susceptible to attacks from hawks during the day.

However, at night time, both crows and ravens have to be wary of predatory owls that may kill and eat them while they’re roosting.

Can ravens and crows mate with each other?

You might find it interesting to learn that ravens and crows are not that closely related even though they belong to same family of corvids. It’s also been observed that ravens and crows don’t even get on with each other and one species can be extremely violent and aggressive toward the other.

However, in saying that, there have been a few instances where ravens and crows have successfully mated and produced offspring. There was a successful mating between a common raven and an American crow in Toronto, Canada in 1993 that produced two offspring.

Are crows more aggressive than ravens?

It’s a proven fact that crows are far more aggressive than ravens. Even though both species are territorial, ravens will seldom display aggression. Crows, on the other hand, are well known for mobbing other birds, even large birds of prey like hawks and eagles.

Do ravens and crows talk to each other?

Are ravens noisier than crows?

It’s actually crows that are the noisier of the two species. Crows will often caw while they’re flying around and they’re quite vocal at other times too. On the other hand, ravens are usually silent when they soar and glide through the sky.

Are crows afraid of ravens?

Even though crows are smaller than ravens, they are more often the aggressor during an encounter between the two species. Ravens are far more solitary birds and prefer a quieter life than their noisy cousins.

Although, at first glance, ravens and crows may look very much alike, there are many differences between the two species. For example, ravens are much larger than crows and they are not as social. Ravens often travel in pairs while crows like to form large family groups.

Ravens also have larger beaks that are curved at the tip while crows have straight beaks. Another quite significant difference is the shape of their tail. While ravens have wedge-shaped tails, crows have fan-shaped ones.

If you listen carefully to their song, you can also tell these birds apart. Crows are much noisier and tend to let out a persistent cawing sound. On the other hand, ravens are much quieter and make the occasional deep-toned croak. However, both crows and ravens are great imitators, so it wouldn’t be uncommon for a raven to occasionally sound like a crow.