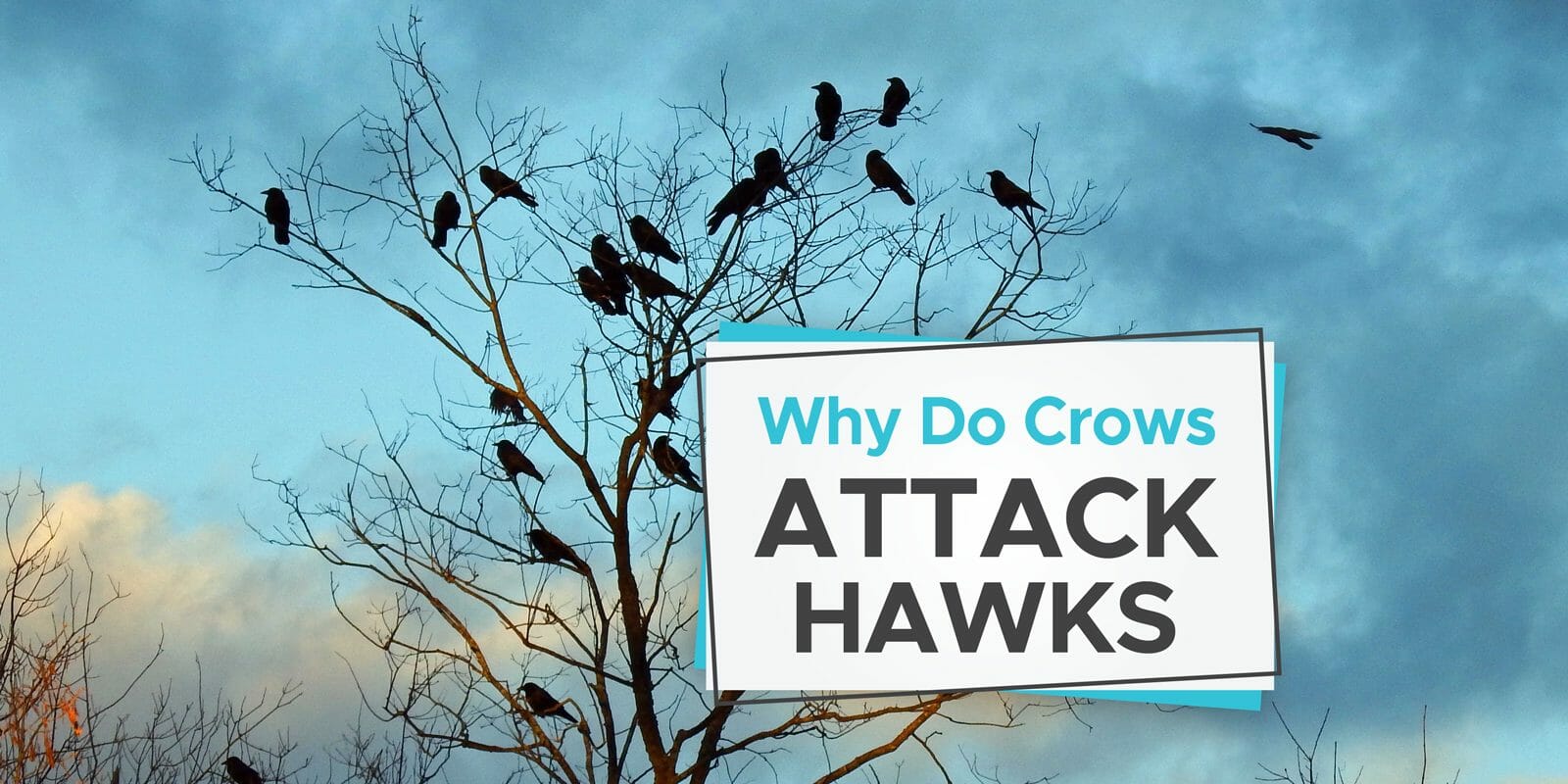 If you’ve ever seen a mob of crows chasing away a large bird of prey such as a hawk, you might be wondering why this happens. Crows are certainly not birds of prey and they are not equipped with sharp talons and flesh-tearing beaks like hawks are. So, why do crows attach hawks?

The simple answer is because crows see hawks as a potential threat to their clan and their nests. But crows are also highly intelligent birds and have been taught as babies to dislike large birds of prey such as hawks.

It’s ingrained in their genetic makeup to chase away any hawk that dares to enter their territory. And, they do this in great numbers mainly for safety. This activity is known as mobbing.

Mobbing is actually an evolutionary process that is triggered by the crow’s survival instinct.

You may not realize it, but crows are considered as one of the most intelligent birds on the planet. Crows do understand that, on their own, they don’t stand a chance against a bird of prey such as a hawk.

Therefore, they get together in large numbers and will swoop at the hawk even if the raptor is just perched at a high vantage point minding its own business. Crows will even strike at the hawk with their beaks in order to chase it away.

But, it’s not just crows that exhibit this mobbing behaviour. Other birds such as ravens and even small sparrows will often mob a large bird of prey like a hawk.

Primarily, the reason for this behaviour is to chase the raptor away. This is especially prevalent during spring and summer when crows are nesting. Therefore, they perceive the hawk as a threat to their young and will do everything in their power to keep the raptor away from their nests.

Mobbing can be different in a variety of situations. In one kind of mobbing, the aim of the crows is just to chase the hawk away. In this instance, the crows will swoop on the hawk while emitting loud noises. The hawk, in this case, simply views the mobbing as an annoyance and will fly away to a more suitable spot where it can hunt in peace. When this happens and the hawk is a safe distance away, the crows will leave it alone and return to their home territory.

However, there are bird species that exhibit a more aggressive form of mobbing. One of these species is the red-winged blackbird. These birds will aggressively attack not only birds of prey such as hawks but also humans if they feel there’s a threat to their nests or young.

Crows are also notorious for mobbing owls, especially during nesting season. These intelligent birds understand that owls hunt at night and that they are likely to attack their nests to find an easy meal.

It’s also believed that crows may mob a large raptor simply as a means of showing off. It’s a way for them to display that, although they’re not as large or powerful as a hawk, they still shouldn’t be messed with. 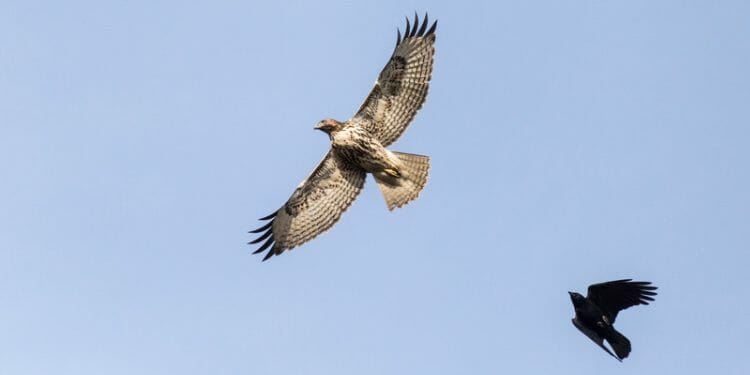 Why Do Hawks Not Retaliate When Being Mobbed By Crows?

If you’ve ever witnessed a hawk being mobbed by crows, you might notice that the hawk does not fight back. Sometimes, it will just remain on its perch until the mobbing stops while other times the hawk will simply fly away. So, why is that?

In general, the mobbing crows won’t actually inflict any physical harm on the hawk. Although it is possible, it’s not actually their intent. Instead, mobbing is more of a bullying tactic and is designed to chase the hawk away.

It’s also important to note that crows are actually more agile than hawks. Therefore, it would take a fair amount of energy for a hawk to actually catch and kill a crow. You see, hawks are quite efficient in how they use their energy and chasing and catching a crow is just not worth it when there are far easier prey available.

Additionally, hawks have well-developed brains that can reason. These raptors understand that, although they have the ability to take down a single crow, they would fight a losing battle against a mob.

You’ll also find that hawks are not all that aggressive either. They only hunt to feed and don’t feel the need to fight or kill just for the sake of it. In general, hawks prefer to keep to themselves and expend their energy on hunting prey rather than showing off their might.

It’s Different During Nesting Season Though

As you know, hawks are highly protective of their nests and their young and will defend their territory as fiercely as they can. Interestingly, crows tend to stay well away from nesting hawks. This, once again, alludes to the intelligence of the crow as it must understand that a nesting hawk is not to be toyed with.

Consider the fact that a nesting hawk is highly aggressive and will even attack humans and large animals that invade their nesting territory. Therefore, an intelligent crow that has reasoning ability will not dare to hassle a pair of nesting hawks even if it has the backup of the entire crow population in the area. 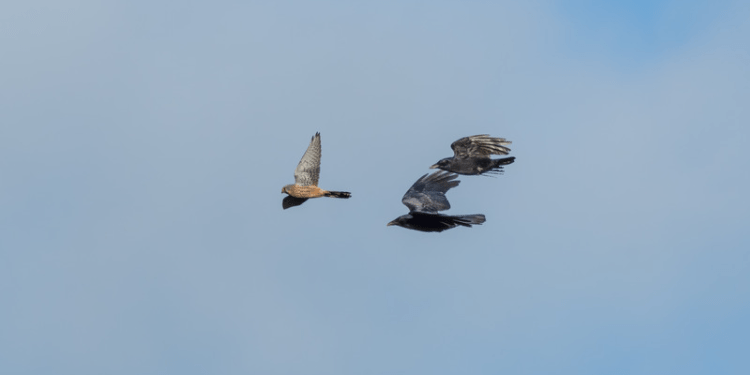 Is It Possible For Crows To Kill A Hawk?

Although rare, it is definitely possible for a mob of crows to actually kill a hawk. Primarily, this might occur of the hawk has killed one of their own. You see, crows have quite a well-developed and complex social structure and can recognize if one of their own has been killed.

Therefore, if a hawk has killed a crow, the other crows are likely to poke that hawk to death in retaliation. This is one of the prime reasons that birds of prey will very rarely view crows as a staple meal even though they could be.

Are Crows Considered As Being Bullies?

For many people, crows are considered a bit of a nuisance as they scavenge through bins and mob other birds to chase them away. But, are crows actually bullies?

Crows are perceived as being loud and mischievous and, being highly intelligent, they can certainly be seen as the bullies of the bird world. According to a study conducted by citizen scientists and published in the Ornithological Advances journal, crows were seen as the instigators 98% of the time in reported fights with ravens.

This is due to the fact that crows and ravens (learn the difference between crows and ravens here) share the same food sources and ravens can be a threat to nesting crows as they will raid the nests. In these instances, it would appear that crows can be seen as bullies even though there may be a reason for their aggressive behaviour.

Why do crows attack birds of prey?

For crows, this is a defence mechanism because they see birds of prey as a threat.

Why do crows hate eagles?

Crows see eagles as a threat because eagles are birds of prey.

Do hawks and crows fight?

In general, hawks will avoid a confrontation if at all possible. Even though a large hawk is quite capable of taking down a solitary crow, crows are very rarely alone when they’re defending their territory or their nests. In these cases, the hawk realizes that it can’t win when there are numerous crows, so it will simply fly away.

Are hawks afraid of crows?

Generally, hawks view crows more of a nuisance than a threat. Although, it is possible for a mob of crows to attack and kill a hawk, this is not common. When a hawk is being mobbed by crows, it’s much easier for the hawk to fly away and find a more peaceful spot to look for prey.

Hopefully now you have a better understanding of why crows attack hawks. It’s not just an act of mischief but a long-evolved survival instinct to chase away the raptor and to protect their nests and their young.

Being highly intelligent birds, crows understand that alone, they are no match for a fully grown hawk and that they could easily become a meal for that hawk. Therefore, they have learned that if they get together with their clan, they have the best chance of chasing the hawk out of their territory and keeping their young safe.

One the other hand, hawks are solitary birds and prefer to hunt on their own. They find the attack from a mob of crows quite annoying and will often just fly away to find a more peaceful spot.