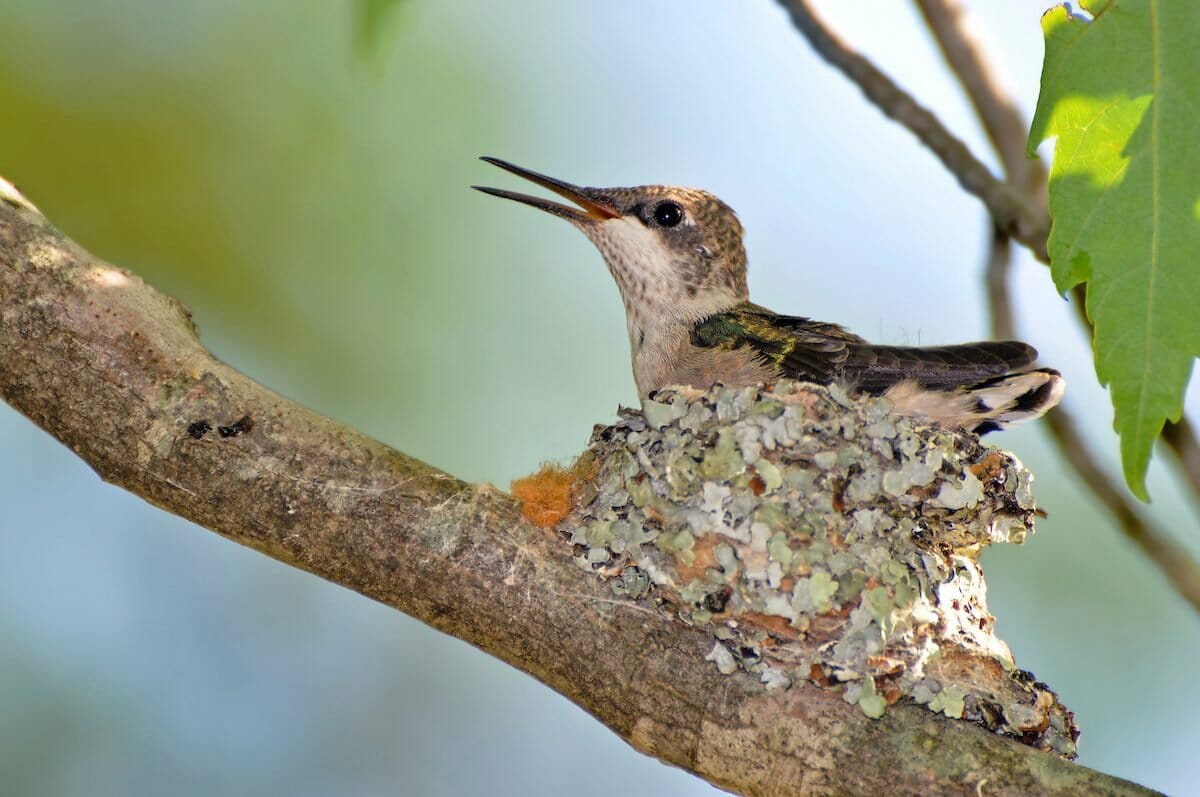 Have you ever seen a hummingbird nest? Chances are, you probably haven’t as they’re extremely small and incredibly difficult to spot from the ground. Generally, a hummingbird nest is about the size of a golf ball and will usually be hidden in the branches of a tree.

Hummingbird nests are also well camouflaged to hide them from predators. The little hummers decorate their nests with moss, lichen and even small pieces of bark to add to the camouflaging effect.

In this article, you’ll learn all about how hummingbirds make their nests, where they like to nest and what they use to build their nests.

Hummingbird Nests Are Only Built By Female Birds

Did you know that the female of the hummingbird species is entirely responsible for building the nest and raising the young?

Once the mating is over, the male hummingbird will move on to find the next female to mate with. He does not take any responsibility in the nest building or raising of the young.

This is primarily because the female won’t let him. In fact, female hummingbirds will chase away any male that comes near their nest.

A male hummingbird’s sole purpose is to mate with the female and guard the food supply in his territory. After mating, females will commonly stay in the vicinity of the male they mated with and start building their nests.

When Do Hummingbirds Nest?

Nesting season depends entirely on what species of hummingbird visits your garden. There are some species, like the Anna’s hummingbird, that will nest between October through to August.

This is because these little hummers tend to stay in the same place year after year and generally, do not migrate. If you live in Arizona, California, Oregon or Washington, you might find that you have resident Anna’s hummingbirds.

However, for most migratory species of hummingbirds, nesting season is from February through to May. On the other hand, birds that fly further north to places like Alaska, will nest from April through to July.

Each female hummingbird lays only 2 eggs in the nest. That’s because she’s not capable of raising more than 2 young birds at a time. However, she may mate again and end up raising two broods each season. It’s extremely rare for female hummingbirds to raise 3 lots of young in the same season. 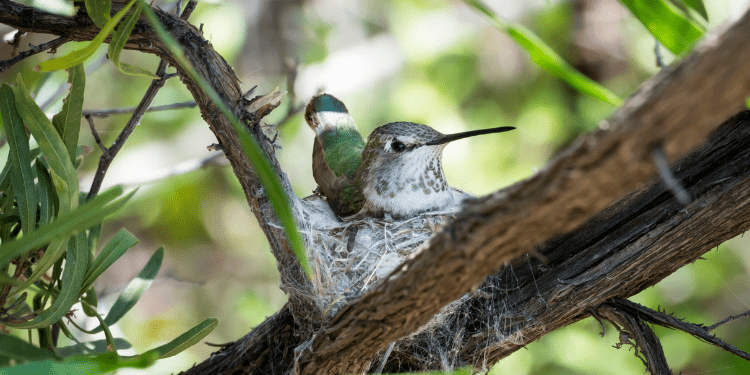 Where Do Hummingbirds Build Their Nests?

Most species of hummingbird will build their nests in tree branches high above the ground. The nests are often placed in the fork of branches. Hummers also like to ensure that there’s a good coverage of foliage above the nest to protect it from rain.

Some hummingbirds will also nest in shrubs and vines. They even like to nest in thorny plants as this gives them added protection from predators. Interestingly, hummingbirds have also been found to nest in some unusual places. These include light fixtures, in garden decorations, on wind chimes and on top of security cameras.

The main criteria for a good nesting site is that there’s plenty of shelter and that there’s a good food supply nearby. This is not just nectar but also areas where there are plenty of insects.

One of the favorite places for female hummingbirds to find insects is in the sap holes created by woodpeckers. This is because insects are likely to be trapped by the sticky sap. This ensures a steady supply of insects for the females to feed to their young.

A female hummingbird also looks for the presence of spider webs before she chooses a nesting site. This is because she uses the fibers of the webs to help bind her nests together and make them strong. 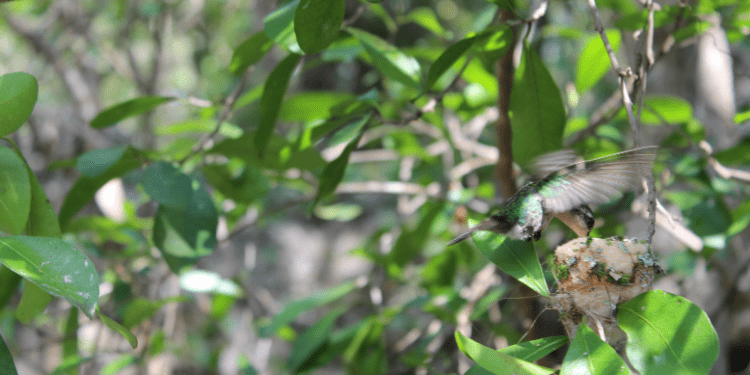 How Female Hummingbirds Build Their Nests

Once she’s collected all the materials, the female hummingbird will start building her nest layer by layer. She forms the materials into a dense cup and binds it with spider web silk. During this layering process, she will stamp her feet up and down to condense the material and to form the cup shape.

The little hummer will then decorate the nest with lichen, moss and other materials to create a camouflage look.

The top of the nest is curved in slightly so that the eggs won’t tip out if there’s a lot of wind. The spider silk also gives the nest a little elasticity so that it can expand once the eggs hatch.

Once the eggs hatch, the young birds will grow quickly. This means that the nest has to stretch to accommodate their growing size. Young hummingbirds will not leave the nest until they’re almost fully grown and are able to fly on their own.

That’s why incorporating the spider web silk into the nest is so important. This will allow the nest to stretch and expand as the young birds continue to grow.

Each nest will generally only last one season, especially if it has been used for two lots of eggs. However, the female hummer may return to the same nesting spot year after year if she finds it suitable.

She is likely to build her new nest nearby or sometimes even on top of the remains of the previous season’s nest. She also may even recycle old nesting materials and incorporate them into the new nest.

Interesting Fact
Hummingbirds will not nest in cavities or use birdhouses. They don’t like to be enclosed when nesting.

It’s very rare that you’ll easily spot a hummingbird nest because of its tiny size. However, if you’re curious, the nest of a hummingbird can look like a bulge or small white knot on a branch. It might look like some fluffy cotton has been caught in a branch.

If you have the patience, you might consider following a hummingbird to see if she’ll lead you to her nest. But, keep your distance. Female hummers may abandon the nest if they think it’s been tampered with. The female may also not go near her nest if she know you’re watching and may even lead you in the opposite direction.

Guide To Each Species And Their Preferred Nesting Sites

Here’s a general guide to each species of hummingbird, what their nests look like and what their preferred nesting sites are. 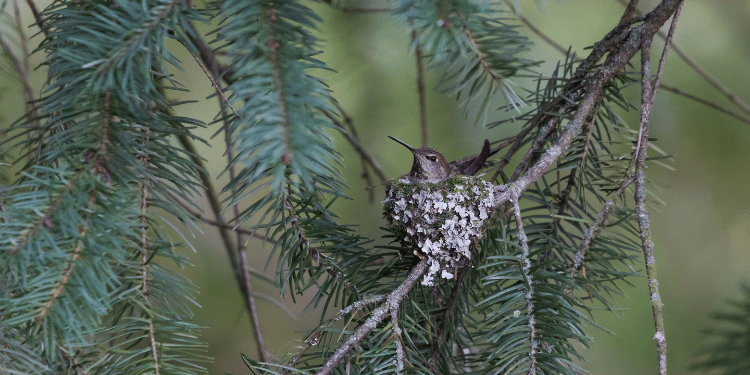 Preferred nesting site: Tree branches belonging to oak, eucalyptus or sycamore trees that are 6 to 20 feet above the ground. Tall shrubs are also popular nesting sites.

Type of nest: This species of hummingbird starts her nest with a relatively flat platform and then builds up the sides of the cup while she’s incubating the eggs.

Preferred nesting site: Exposed, small horizontal dead branches that are 6 to 12 feet above the ground but well below the top of the canopy.

Type of nest: These hummers create a deep cup with a rim that’s curved inward.

Preferred nesting site: This species of hummingbird prefers to nest in a covered area such as rock overhangs or under structures such as roofs or sheltered cabins. They will even build their nests on electric wires.

Type of nest: A large cup-shaped nest usually made from green moss, soft plant fibers, feather down and animal hair.

Preferred nesting site: These little hummers build their nests on a horizontal or drooping branch or even in the fork of a tree.

Type of nest: A loosely built cup made from grasses, plant fibers and spider webs. These birds will camouflage their nests with bark and leaves but tend to not decorate them.

Preferred nesting site: These little birds will return to the same nesting site year after year. They like to build their nests under overhanging branches. This keeps the nest warm.

Type of nest: The nest is a cup shape with a thick inner layer. The outside of the nest is camouflaged with moss, lichen and pieces of bark. During incubation, the hummer may continue to add materials to the nest to make it taller.

Preferred nesting site: Calliope hummingbirds prefer building their nests in conifers. They like to select a limb that is sheltered with overhead branches. This protects the nest from rain and also hides it from predators. Sometimes, a female hummer will attach her nest to a pine cone to give it extra support.

Type of nest: The nest of the Calliope hummingbird often looks like a small pine cone. It’s cup-shaped and made from soft, downy plant materials. The outside of the nest is camouflaged by using moss, lichen or pieces of bark.

Preferred nesting site: Costa’s like to nest closer to the ground and their nests are often found in shrubs like gray thorn, acacia, cholla and ironwood. The nests are normally 3 to 7 feet above the ground.

Type of nest: These little hummers build loosely formed nests, again shaped like a cup. They use strips of bark, small leaves, lichen and even the down from sunflowers. 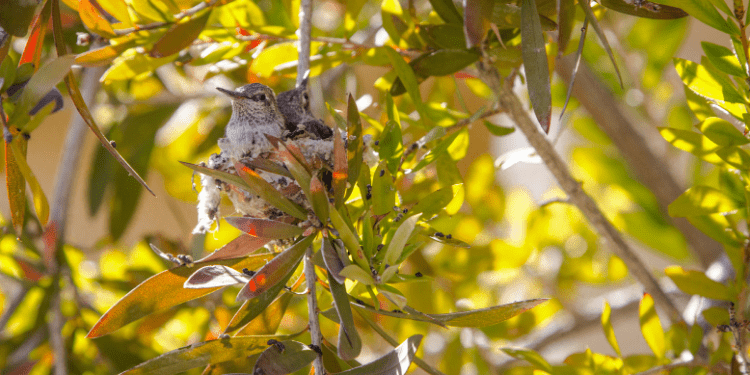 Preferred nesting site: These hummers attach their nests to small twigs or branches that tend to slant downwards. They like to cover the outside of their nests with mainly lichens. It’s common for these hummingbirds to have two nests and lay eggs in the second nest while they’re still feeding the juvenile birds in the first nest.

Type of nest: These tiny nests are about the size of a thimble. The outside of the nest is usually green due to the covering of the lichen. These birds also use pine resin as well as spider web silk to bind their nests together.

Preferred nesting site: The Rufous hummingbird also likes to build its nest on a downward drooping small branch, usually in the fork. They’ll build their nests in tall conifers and even lower shrubs.

Type of nest: Their nests are also cup-shaped and made from soft plant down all held together with spider silk. The outside of the nest is then camouflaged with bark, moss and lichen.

Do hummingbirds use the same nest twice?

Some species of hummingbirds will use the same nesting site every year. However, they generally won’t use the same nest year after year. The one exception is that the female hummer may lay 2 lots of eggs in the same nest, one after the other. If this happens, she’ll constantly repair the nest if needed.

What trees do hummingbirds nest in?

Hummingbirds love to nest in deciduous trees such as maples, oaks, birch, sycamores and elms.

What time of year do hummingbirds make their nests?

Hummingbirds start building their nests anywhere from October to early June. It really depends on the species.

We hope you enjoyed our complete guide to hummingbird nests. As you now know, hummingbird nests are tiny. About the size of a golf or ping pong ball. They are usually cup-shaped and use materials like grass, leaves, pieces of bark, plant down, feathers and even animal fur.

Most hummingbirds like to camouflage their nests using things like lichen, moss and small bits of bark and leaves. The most interesting fact about these nests is that they are held together with spider silk. This not only binds the nest but also gives it flexibility to expand as the hatchlings start to grow.

Have you been lucky enough to spot a hummingbird nest? How did you find it? Please feel free to share your stories with us in the comments below. We love reading them.