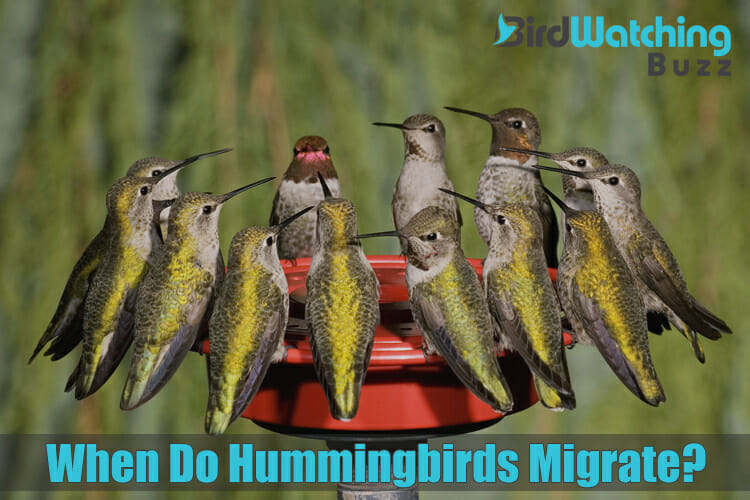 We love to see hummingbirds visit our garden in the warmer months during their breeding season. Therefore, it’s important for us to know their migration pattern so we can put out our hummingbird feeders and nectar for them to enjoy.

A lot of hummingbird species will spend the winter months in Mexico and Central America where the weather is warm all year round. Those of you who live in the southern states like California, can expect to see hummingbirds throughout the year.

Once the weather starts to warm up in other parts of the country in early spring, hummingbirds will start migrating north to begin their breeding.  This can start in early February, usually with the males of the species.

By the time summer is in full swing, hummingbirds can be sighted in Alaska and Canada around August.

To understand their migration a little better, let’s look at the general breeding areas of the most common migratory species of humming birds. 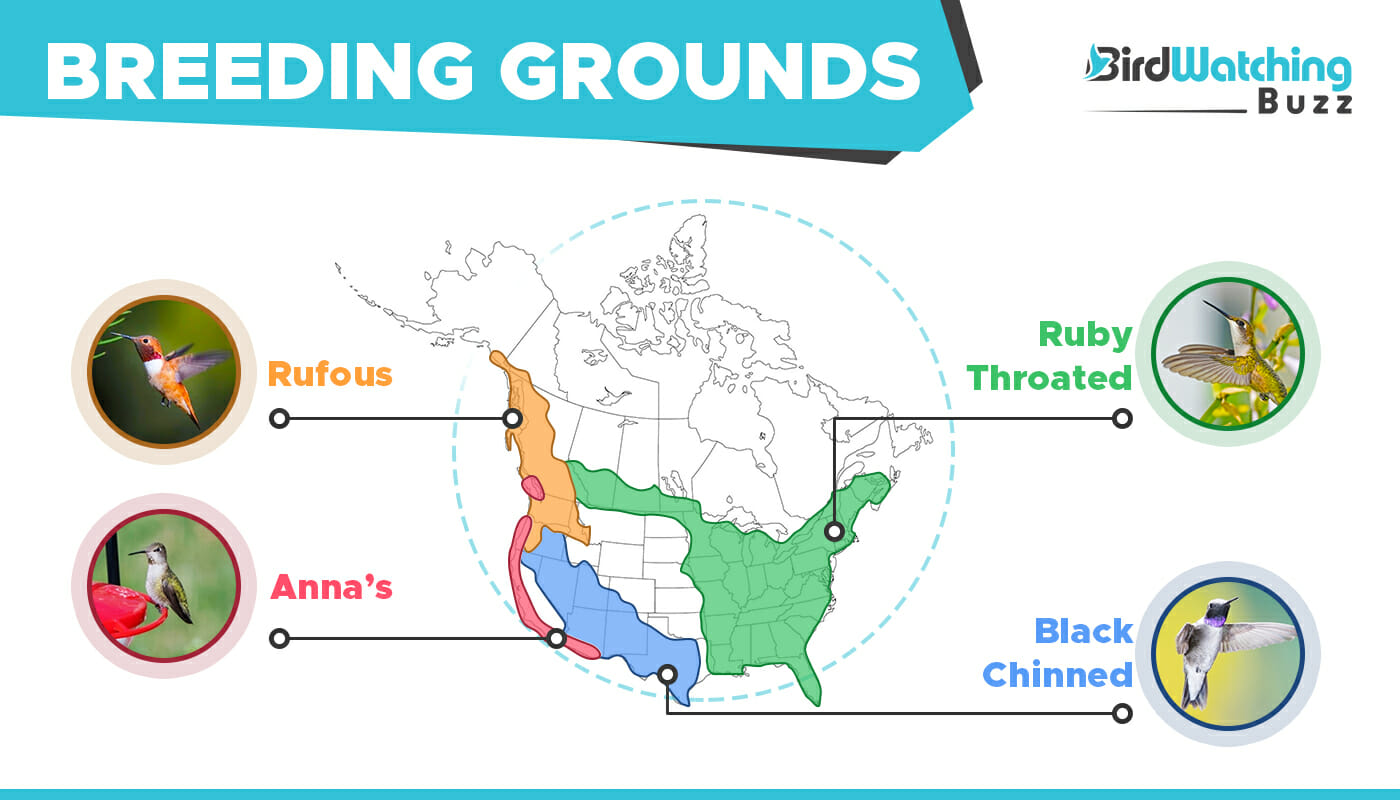 The breeding ground of the Ruby-Throated hummingbird covers a large area over the eastern half of the country from the Gulf of Mexico right up to Quebec in Canada. Some of them will also go as far north as Saskatchewan and as far west as Calgary. This particular species covers the largest breeding ground of all the species.

The Rufous hummingbird prefers to breed on the west coast from San Diego almost up to the Yukon and as far west as Anchorage in Alaska. It has the longest journey to take either heading north or back down south for the winter.

The preferred breeding ground for Anna’s hummingbird is along the west coast from San Diego up to Vancouver in Canada. This species doesn’t actually migrate. Therefore, it can be seen all year round up and down the west coast. In fact, they have learned to adapt to colder temperatures by entering a state of torpor.

The Black-Chinned hummingbird prefers the more arid areas of the country for it’s breeding. It generally like to breed from as far south as San Antonio right over to New Mexico, Arizona and up to Idaho.

This species of hummingbird prefers to breed in Mexico and the western part of North America. By hummingbird standards, they don’t travel far for summer and journey only as far as southern California, Nevada, Utah and Arizona.

However, some have been seen as far north as Canada and Alaska.

These hummers prefer to breed along the west coast around the Californian coast and southern Oregon.

Calliope hummingbirds prefer to breed in the western parts of North America as well as Canada and Alaska. This is the smallest hummingbird seen in the United States. However, it can travel up to 5,000 miles a year.

Broad-Tailed hummingbirds prefer to nest in the greater Colorado area. However, they have been seen nesting as far north as Wyoming and as far west as Utah. They prefer forest, woodlands and areas with lots of shrub for nesting.

Understanding The Migratory Patterns Of Each Hummingbird Species

Now that you know where the various species prefer to nest and raise their young, let’s look at the migration patterns of each of them and the average time of the year that you’re likely to see them.

Ruby-Throated hummingbirds start their migration from Central America and Mexico early in Spring. You can start to see them around Florida, Louisiana and Texas around the first week in March.

The migration north will continue until around mid-May when the birds heading the furthermost north to Canada, will have arrived.

The migration south starts in the fall in late August or September. 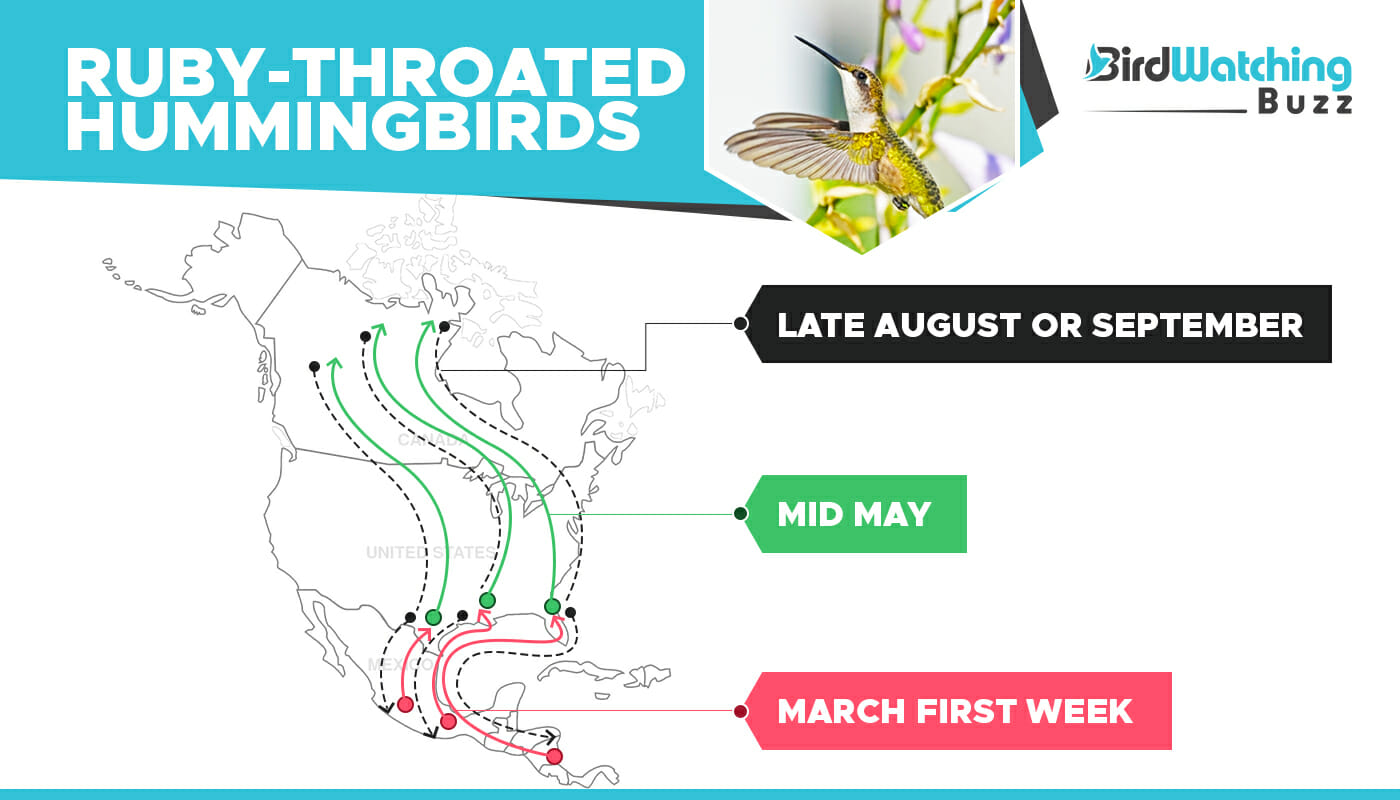 The Rufous hummingbird has one of the longest migratory journey and will travel nearly 4,000 miles from Mexico to northwest Canada and Alaska. Generally, they will travel up the Pacific coast in spring and back down through the Rocky Mountains in late summer and fall.

These hummers start their journey north earlier than other species, in January, and will arrive in Canada and Alaska around mid-May.

They begin their journey back down south in July, traveling inland rather than down the Pacific coast. 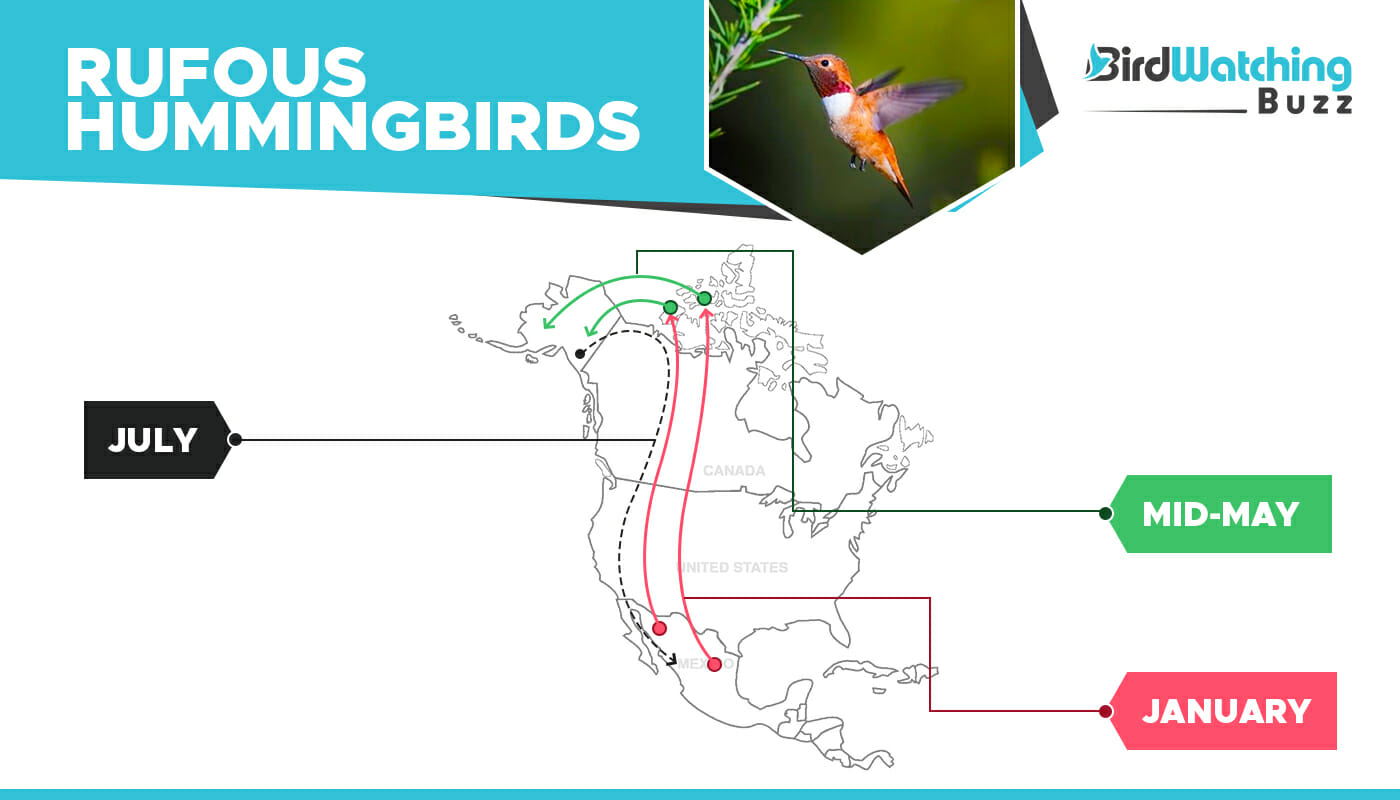 Unlike other migratory hummingbirds, this species doesn’t migrate far north or south. However, they may move slightly up and down the west coast depending on the weather and the availability of food.

For this reason, if you live along the west coast anywhere from Tijuana to Vancouver, you should have feeders out for these little hummers all year round. 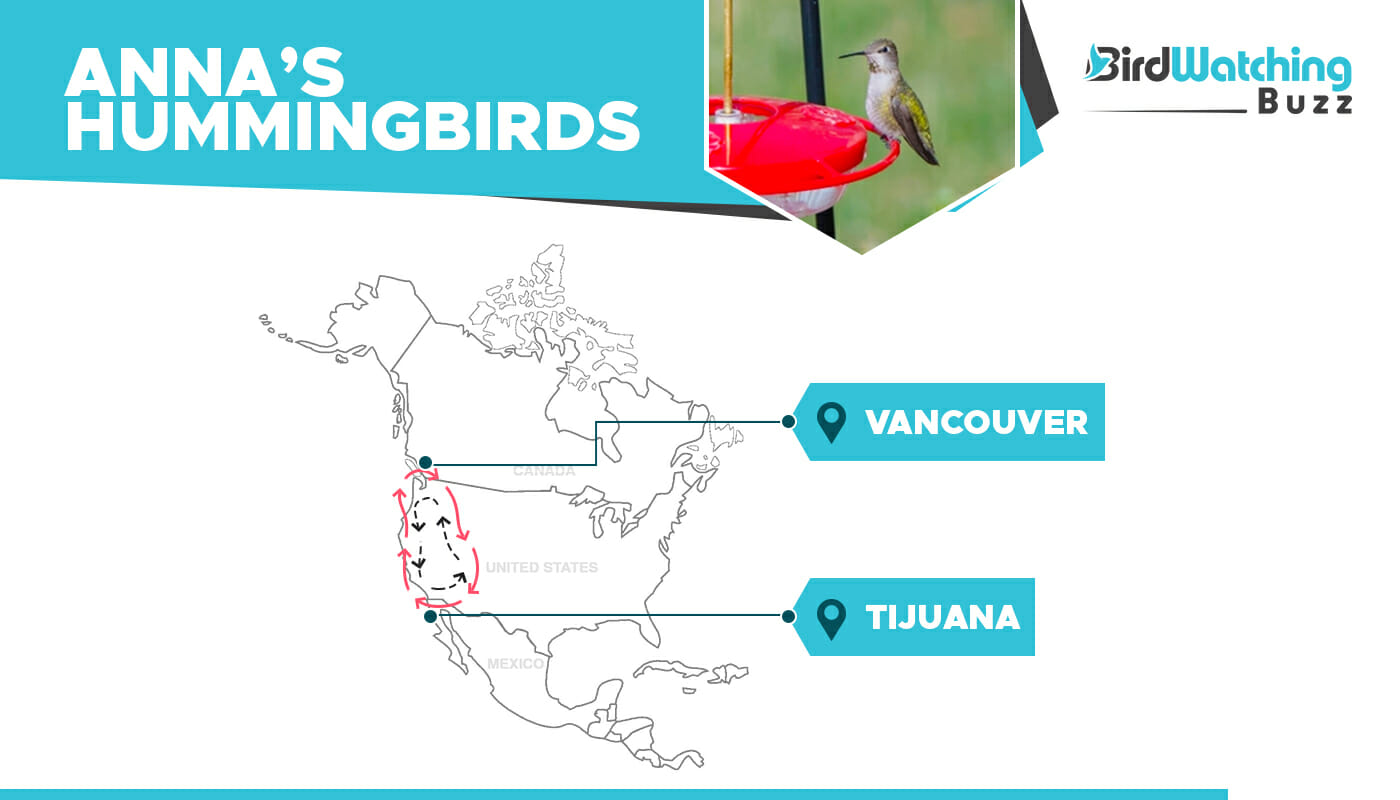 Black-chinned hummingbirds will start their northern journey in spring and will start to arrive in Washington in late May.

For their winter journey back down to Mexico, they’ll start in late June and arrive around mid-August. 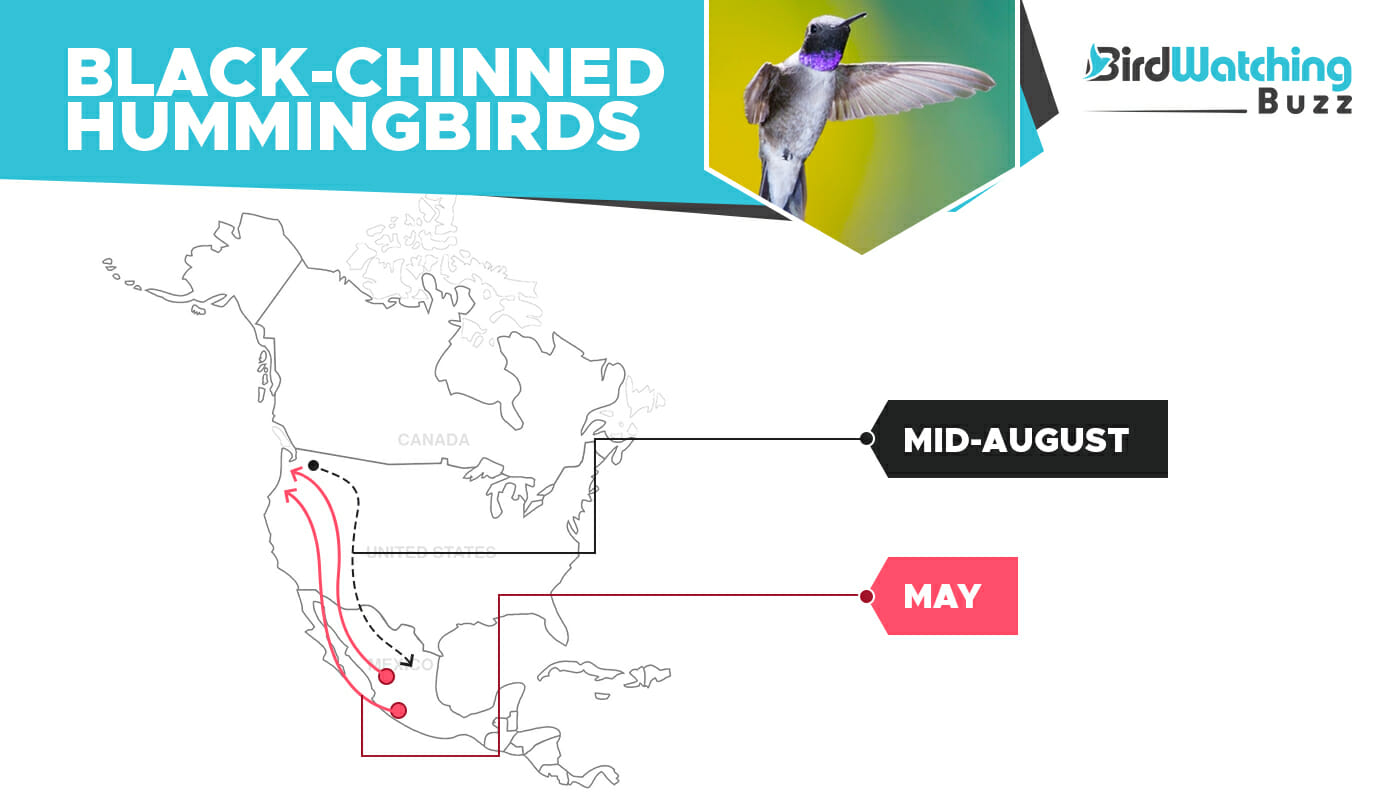 These tiny hummers don’t travel far for their breeding. They prefer desert and arid areas of California and Arizona when raising their young but will move to a more scrubby or woodland habitat in the middle of summer. They will start their migration north from Mexico in February or March.

However, more commonly these hummingbirds will remain in their habitat around California all year long. Especially, if they have ample food supply. Therefore, if you live in areas preferred by Costa’s hummingbirds, you’ll want to keep your feeders out year round.

Allen’s hummingbirds are one of the first species to begin their migratory journey north. They will start migrating as early as December and will arrive as early as January. You can spot them along the west coast mostly in California and southern Oregon.

Some may even prefer to stay in southern California all year round. Therefore, if you live in California, it’s wise to keep your hummingbird feeders out so they’ll have a plentiful food supply. 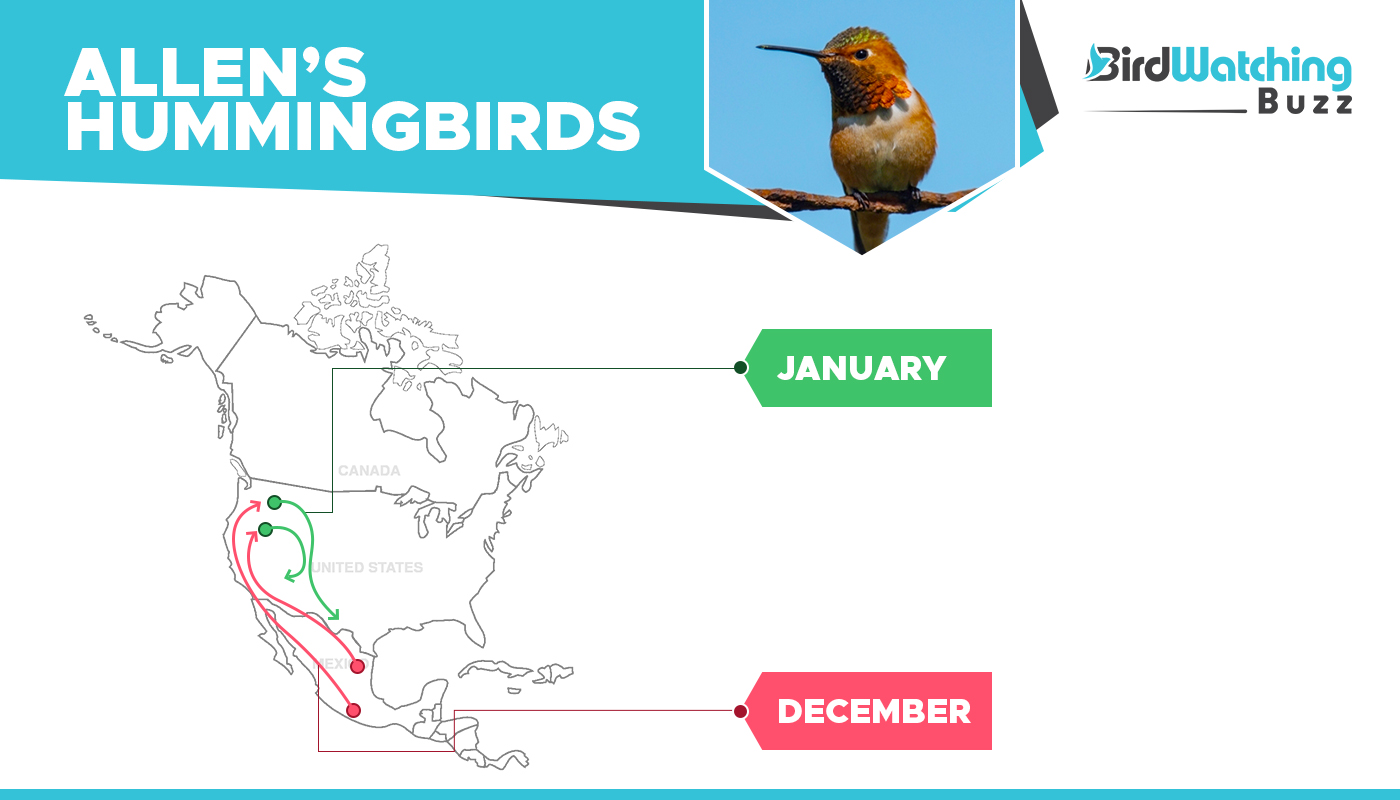 Like the Rufous hummingbirds, these tiny hummers can travel more than 5,000 miles to their breeding grounds in far northwestern America, Canada and Alaska. They begin their migration north in late February to early March, traveling up along the Pacific coast through Arizona, Colorado, Wyoming and Idaho.

When they migrate back down south to Mexico and Guatemala, they prefer to travel via the Rocky Mountains. 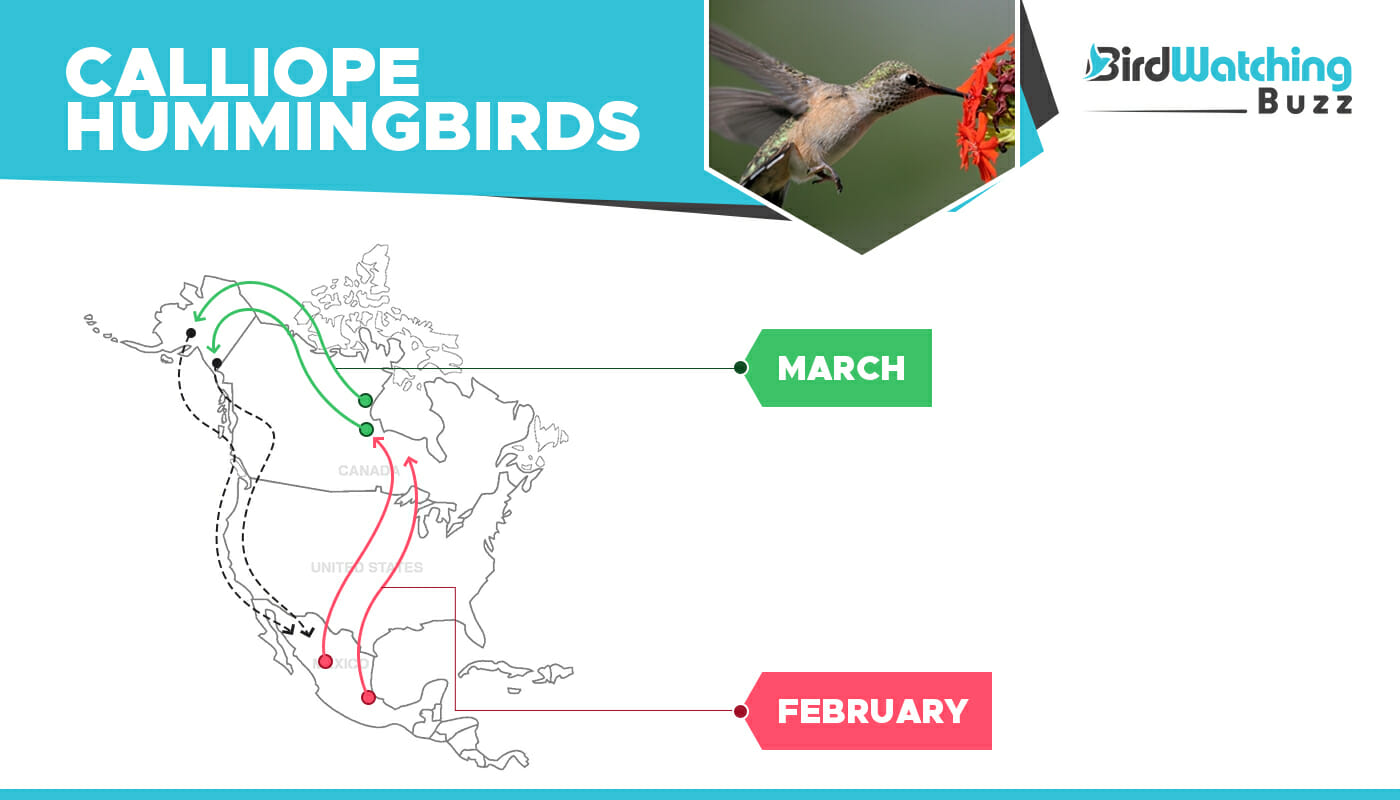 The males of this species will begin their migration north in early spring and will arrive in southern Arizona around late February to early March. Those traveling further north will arrive around late May in Idaho and southern Montana.

In autumn they’ll begin their migration back down to Mexico and south America in early August. 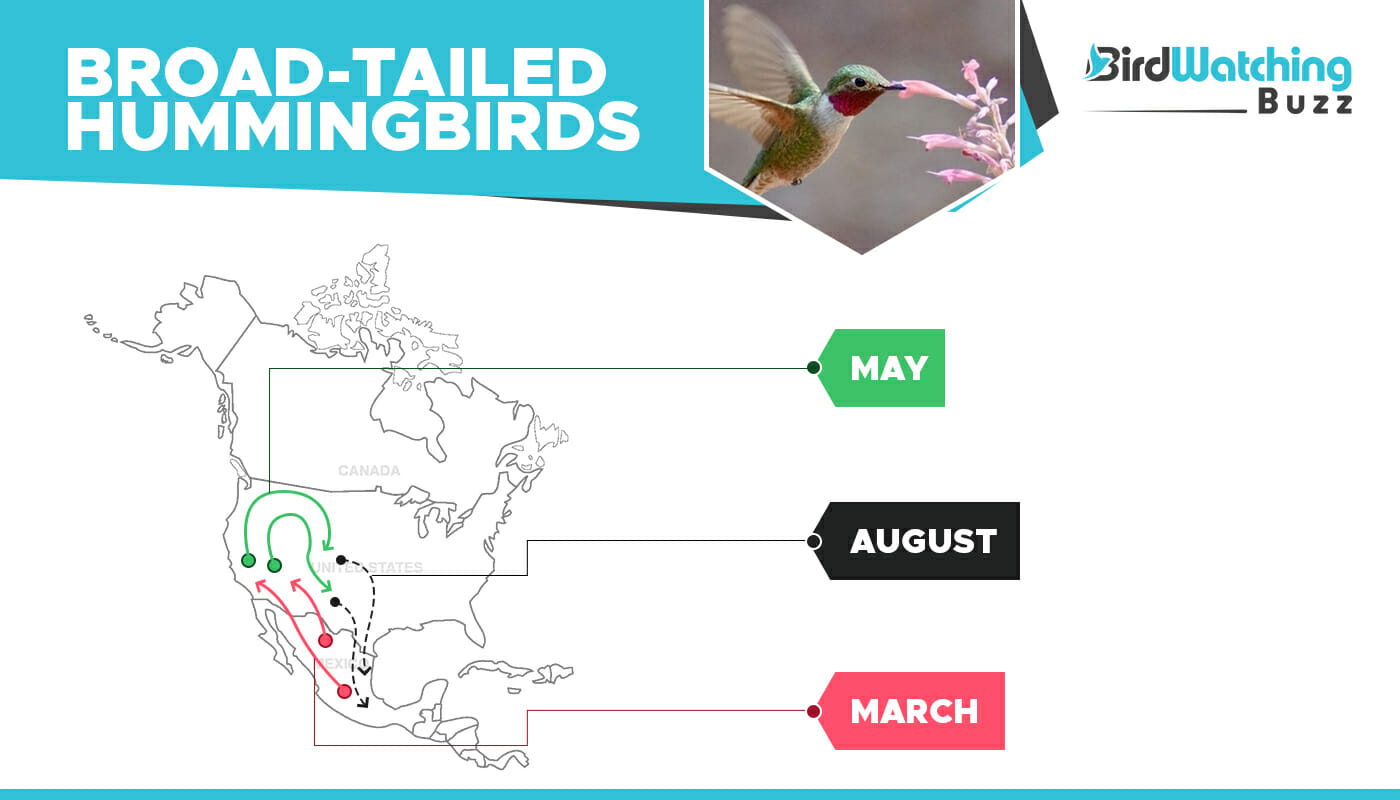 What Happens During Migration?

Generally, it’s believed that hummingbirds will start to migrate when they sense changes in daylight hours and when the amount of nectar, flowers and insects changes.

When hummingbirds migrate, they use up a lot of energy. Their wings will flap around 15 to 80 times per second and their heartbeat speeds up tremendously. To facilitate the extra energy needed for the long flight, hummingbirds will increase their body weight by about 25 to 40 percent before they head off.

Interestingly, hummingbirds make the migratory trip on their own. They will take the same flight path year after year. Generally, they fly low for safety and can be seen just above the tree tops.

During their trip, they need to make stops for food and water to keep up their energy levels. Flying during the day allows them to spot nectar and food supplies to replenish the energy they’ve spent on the long flight.

It’s been recorded that these little hummers can travel up to 23 miles in one day. Some species will travel only a few hundred miles but others can travel thousands of miles. This can take up to four weeks or more.

Of the over 300 species of hummingbirds, only a few actually take the migratory journey from south to north and then back again. It’s particularly prudent for you to know when this journey happens so that you can have food out for them to help them on their way.

Mature hummingbirds feed on nectar. However, hatchlings mainly feed on live insects. This is why some hummingbird species have to migrate to the warmer areas of the country. They need to ensure that there will be adequate food for their babies before they lay their eggs.

Male hummingbirds tend to be very territorial. They will start their migratory journey before the female birds. In this way, they can set up their ‘home’ before the females arrive a little later.

Younger birds will also start their journey a little later because it takes time for them to build the necessary energy reserves they’re going to need for the long trip.

I hope you found this information useful and it’s given you some idea of when you can expect these lovely hummingbirds to visit your garden.

Basically, if you live in the eastern half of the United States, it’s wise to have your hummingbird feeders out between January and November. People living along the Pacific Coast in the south of the country may like to keep their feeders out year round to accommodate those hummers who prefer not to migrate too far.

How many species of hummingbird have you seen in your garden? We’d love you to share your stories with us in the comments below!