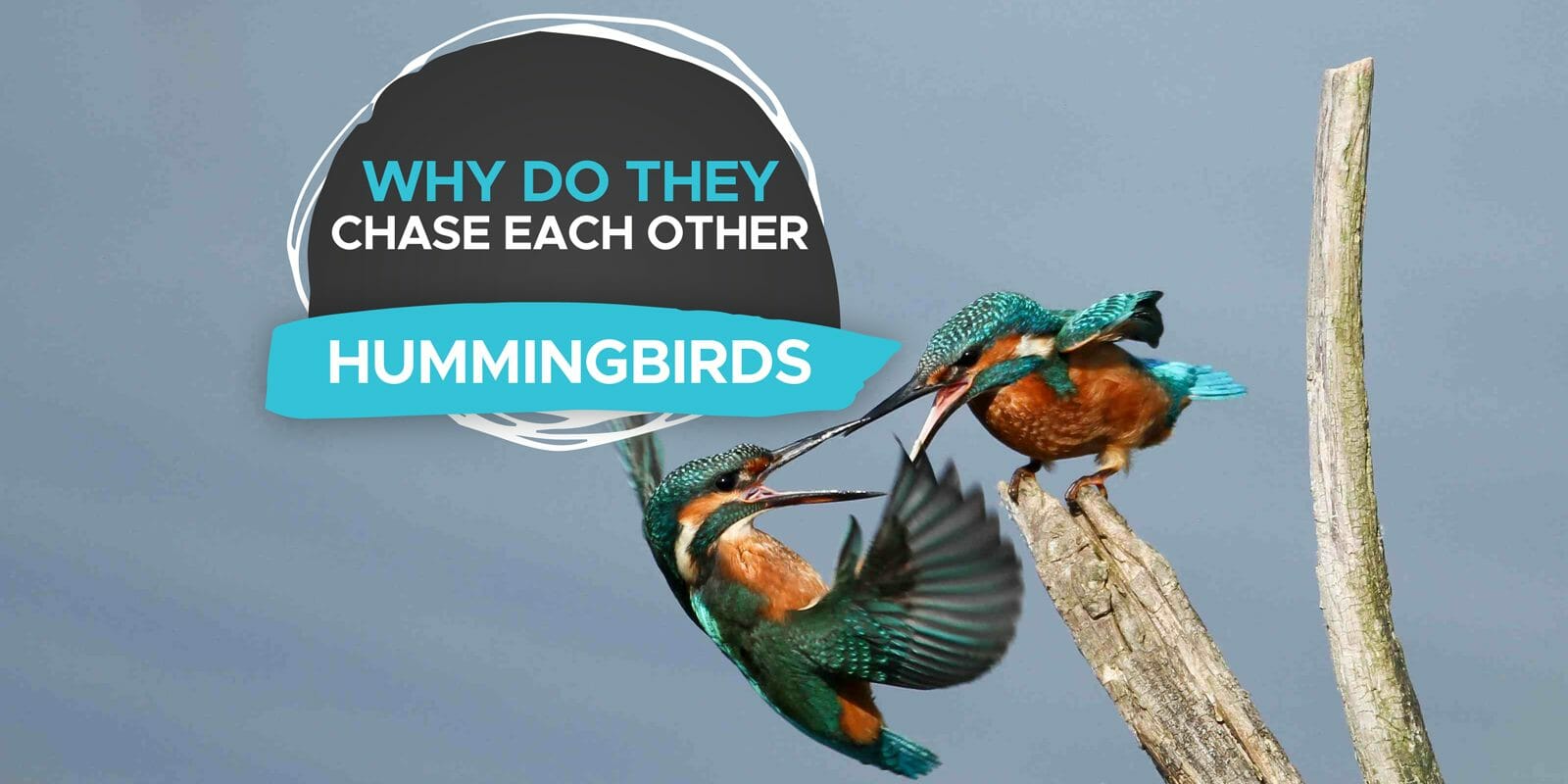 Hummingbirds are such amusing little birds but they can also be quite aggressive. Especially when it comes to establishing their territory and protecting their food sources. If you have hummingbird feeders in your yard, you will most likely have witnessed certain hummingbirds chasing each other. Why do they do this?

There are a few reasons why hummingbirds chase each other. Most notable are the territorial chases where one bird is chasing an intruder away from its food source and nesting area. Then, there are also the playful chases that male and female hummingbirds indulge in during courtship.

To distinguish whether the hummingbirds in your yard are being territorial or just courting a mate, here’s a description of the different types of chase behaviour displayed by these birds. 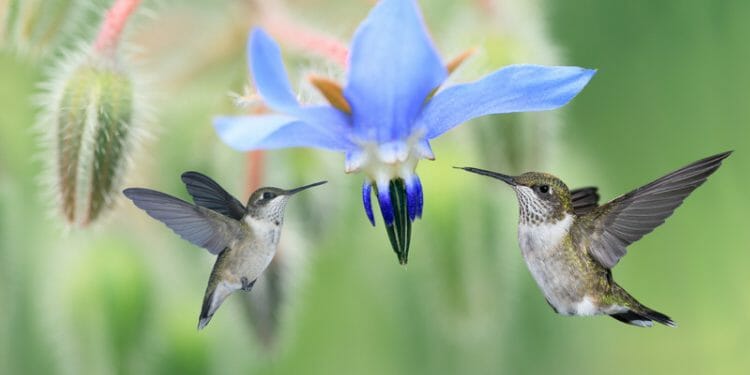 If you ever get to witness a courtship chase, you’ll be amazed at the agility and aerial acrobatics of these tiny birds. To begin with, a male hummingbird will do a mating dance to try and attract a female bird that it can mate with. Remember that hummingbirds do not mate for life and a male hummer will mate with a number of different females during the breeding season.

To attract female suitors, the male bird will puff out his chest and throat to make himself look larger. He might also toss his head from side to side so that the sun will catch the many bright colors on his crown and his throat feathers.

Once the male bird has spotted a female, he will fly around her with his body and tail feathers stretched. This helps to make him appear larger.

The male bird will then progress to either a dive display or a shuttle display in order to endear the female bird into accepting him as a mate.

This amazing display shows off the hummer’s aerobatic skills. The male bird will fly high up into air. This can be as high as 130 feet from the ground. Once he has reached this altitude, he will turn and dive straight down to the ground. When he’s just inches from the ground, he will change direction and emit a honking sound.

The male hummer will complete this dive another 3 or 4 times. The idea behind this display is to show the female bird how fit, agile and strong the male hummer is. Obviously, these are favorable characteristics that any female wants to pass onto her young.

This is more of a playful display and is meant to show affection toward the female bird. It begins when the female bird is quietly perched. To gain her attention, the male bird will fly back and forth around her in a U shape.

At the same time, the male bird will also make certain vocalizations in order to serenade the female. These consist of the male bird swinging his body from side to side to create whistling sounds and vibrations that are made by contracting and expanding his tail feathers.  Sometimes, if the female is interested, she will join the male in this courtship dance.

Once the female has accepted the male bird as a suitor, she will fly to a nearby perch and spread her tail feathers. This is a signal to the male bird that she is ready to be mated. 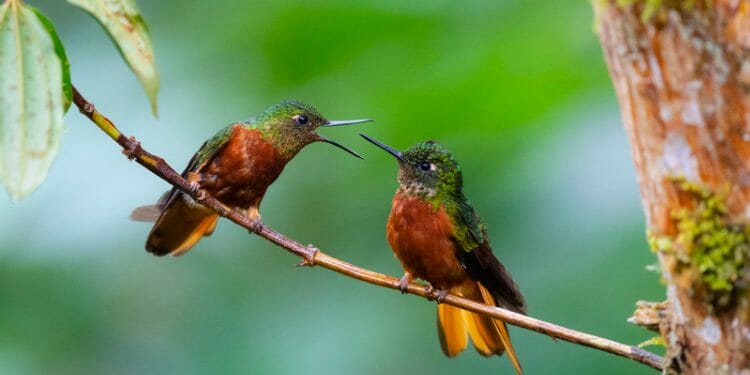 A hummingbird chooses its territory based on the availability of nectar and other food sources as well as ample water and a good supply of nesting materials. Once a male bird has chosen its territory, it will chase away any other male birds that dare to intrude. This essentially eliminates the competition and gives the male hummer sole access to any females that come by.

As a result, this gives the male hummer free reign to exhibit his various courtship displays whenever a female bird enters his territory.

But, it’s not only male hummingbirds that are territorial. A female hummer will also aggressively chase away any intruders that dare to come too close to her nesting site.

How Hummingbirds Exhibit Aggression Towards Intruders

In order to protect their territory and their food supply, hummingbirds have four distinct ways that they show their aggression and dominance.

Before any chasing takes place, the hummingbird will vocalize a warning to any possible intruders. This is usually a series of loud, fast and persistent chirps or chitters. These sounds will become louder and more intense if the intruder does not leave. Eventually, the hummer will use physical means to drive the intruder away.

A Change In Posture

While emitting the vocal warning sounds, the hummer will also change its posture. This involves spreading and flaring its tail and wing feathers. This essentially makes the bird appear larger. Male birds will also flare their throat feathers to show off the bright colors.

In addition, the hummer will point its long, sharp bill towards the intruder to show that he means business. 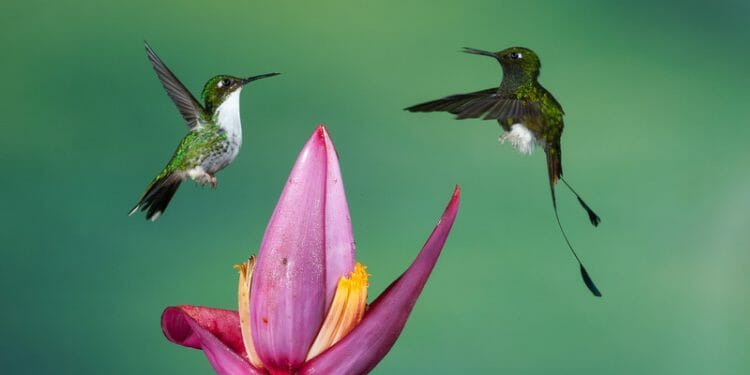 If the above methods don’t scare away the intruder, the territorial bird will start the chase in order to drive the intruder away. While chasing, the bird will also make a number of angry chirps and will continue this until the intruder is far enough away.

As a last endeavor to chase away an intruder, the hummingbird will use physical fighting. This display starts with both hummingbirds hovering in mid air facing each other. Both birds will also point both their beaks and talons towards each other.

Hummingbirds use both their beaks and talons as weapons to attack each other. In addition, they’ll ram their bodies into each other while still in full flight. This type of fighting is quite dangerous and can cause harm to the birds and even death in extreme cases.

How To Reduce The Risk Of Hummingbird Fighting In Your Yard

At times, it can be quite disheartening to see a dominant hummingbird chase all the other little hummers away from your feeder. After all, they’re just looking to share a feed.

If you do have a dominant hummer around your feeder, there are a few things that you can do to give the other birds coming to visit a chance to also have a quiet feed.

Increase The Number Of Feeders In Your Yard

If you only have one feeder in your yard, this guarantees that there is going to be fighting. However, if you have a number of feeders, there’s plenty to go around. Besides, it will be quite difficult for one dominant bird to defend all the feeders at once (find some of our favourite feeders here).

Space Your Feeders Evenly Around The Yard

Even if you have a territorial bird in your yard, if you spread your feeders a good distance apart, it will be harder for the dominant bird to protect all of them from intruders. This essentially gives other visiting hummers a chance to get a feed while the dominant bird is off defending one of the other feeders.

Place Your Feeders Out Of Sight Of Each Other

A territorial bird can only protect the feeders that he can see. Therefore, if you place feeders both in the front and back yards, it’s unlikely that the bird will have the capacity to defend both of them at once. This gives other hummers the chance to also get a good feed. 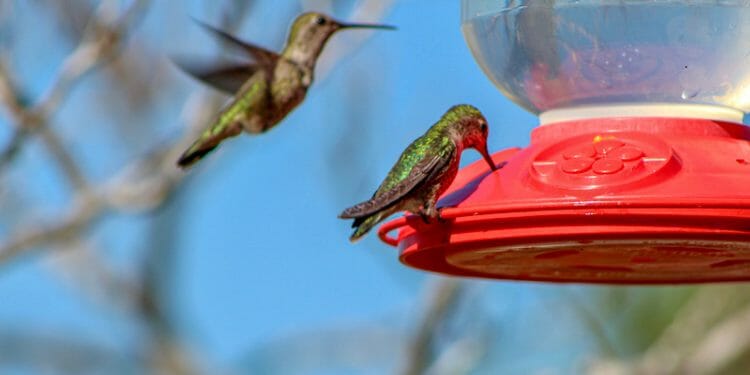 Why are hummingbirds so mean to each other?

In general, hummingbirds are quite aggressive around food sources. This is because, when there has been a shortage of food in the past, they’ve had to get what they could and would have defended their food supply with all their might in order to survive. Consequently, they have no understanding that the food supply in backyard feeders will never run out.

How do you know if hummingbirds are fighting?

Hummingbirds are quite aggressive when they are trying to protect their food supply. It’s quite obvious to know when they are fighting because they’ll try and strike each other with both their beaks and their feet. Plus, they’ll be quite noisy while they’re doing it.

Do hummingbirds come back to the same feeder every year?

It might surprise you to learn that hummingbirds do have excellent memories. They will return to the same feeder every year.

There are two primary reasons that hummingbirds will chase each other. One is protect their territory and food supply and the other is a more friendly chase during courtship.

With a little practice and observation, you should be able to distinguish between the more aggressive and loud territorial chase and the more playful courtship display.

If you do happen to have an aggressive hummingbird around your feeders that is constantly chasing all the other hummers away, there are certain things that you can do to ensure that all the visiting hummingbirds get a chance to have a feed in your garden. These include having multiple feeders and spacing them a fair distance apart out of sight of each other.

When you do this, you can sit back and enjoy watching all the little hummers happily partaking of the sweet nectar in your feeders.