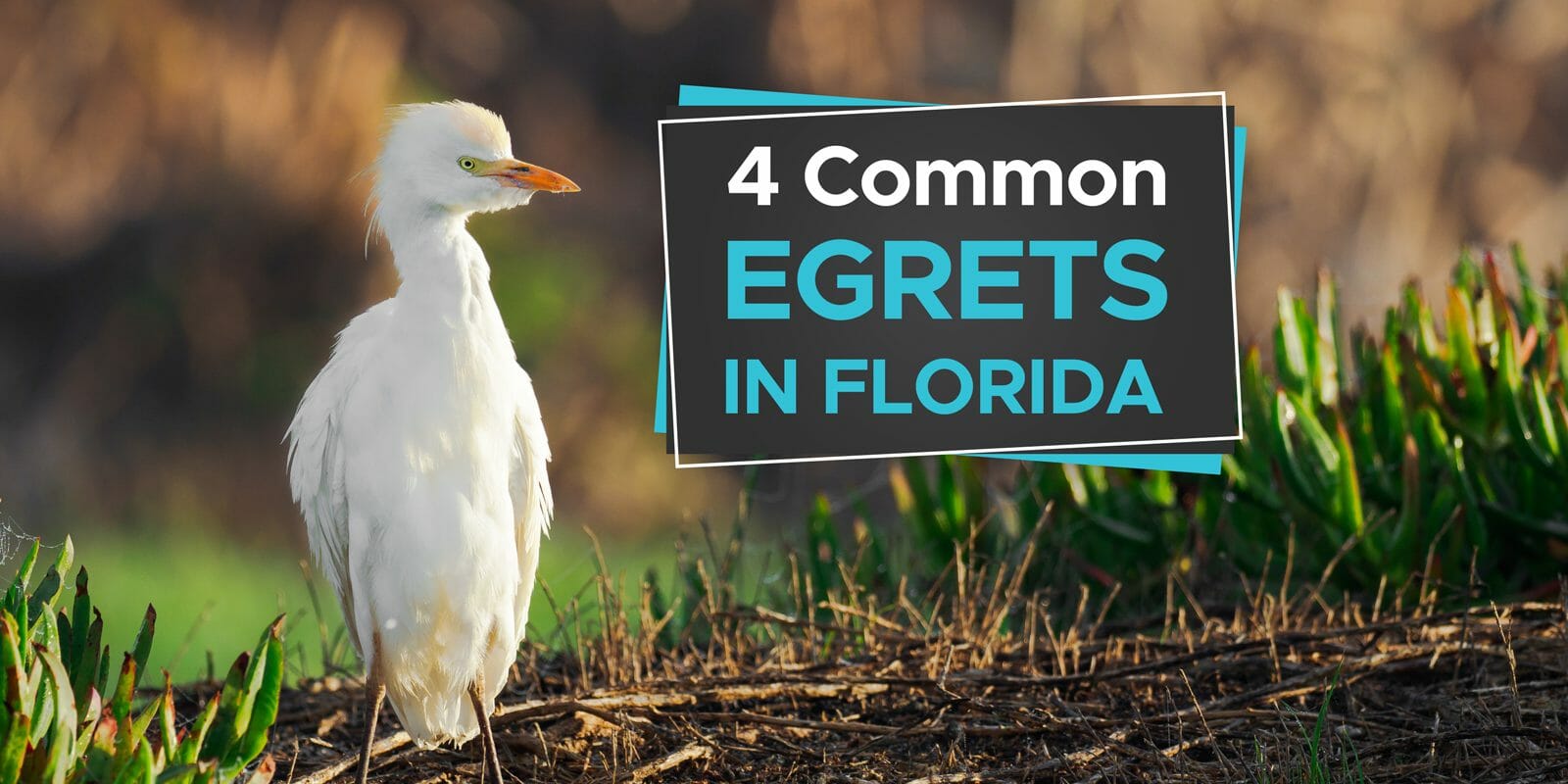 Egrets are large wading birds that are closely related to herons. They have long necks, legs and bills and short tails. You’ll find that egrets have s-shaped necks that can bend vertically. The male egrets usually have wispy, lace-like feathers especially during the breeding season.

Have you ever wondered about whether there are different types of egrets found in Florida. Actually, there are and we’ve going to discuss them individually.

There are 4 species of egrets that you can commonly find in the state of Florida. Three of these, you’ll most likely encounter along the coastline but one of the species of egret can also be found in inland areas around farms and other open grassy areas.

Here is some interesting information about each species. 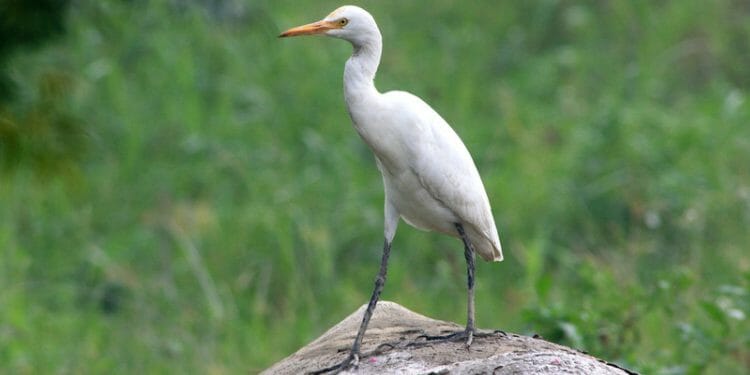 The cattle egret can be found in Florida all year round. It has quite a thick neck and spends most its time inland in fields and meadows rather than along waterways. It gets its name from the fact that it prefers to forage for small insects alongside grazing cattle. It also, quite often, will sit on the backs of the cows to pick off ticks.

In other parts of the world, this birds is often seen foraging alongside rhinos, ostriches, camels and even tortoises.

Here are some of its most distinguishing features:

Unlike other egrets, these birds are rarely seen near waterways. They much prefer open grasslands and fields.

These birds are originally native to Africa. However, they made their way to the States in 1877. Since then, they’ve bred well and are now one of the most abundant heron-type species found in North America.

These birds have a varied diet consisting mainly of insects. However, they have been known to occasionally eat other small birds such as warblers.

To find these birds, head out to agricultural areas where cows and horses often graze. Here you’ll be able to watch their antics as they follow the grazing animals around hunting for insects along the ground. 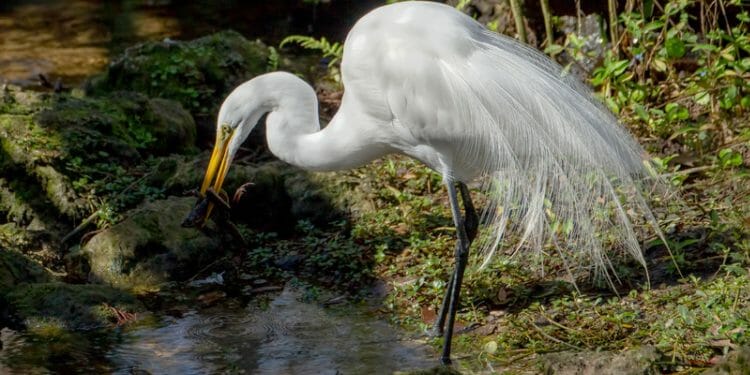 The great egret is an impressive large bird with a huge wingspan of around 57 inches. They generally hang around wetlands and other areas of water and can be found year round in Florida.

These birds were on the verge of extinction in the late nineteenth century as they were extensively hunted for their gorgeous white feathers. This started a strong conservation movement that helped to protect their numbers and that has seen their population steadily grow.

It also resulted in the great egret becoming the symbol of the National Audubon Society. This society was founded to protect birds from being hunted for their feathers.

Here are some distinguishing features of these magnificent birds:

These birds are indeed waders and will wade around in shallow waterways, either along the coast or around inland lakes and rivers. They mainly hunt for fish, frogs and a range of other small aquatic animals. They have a habit of just standing still and waiting for unsuspecting prey to swim by. Then, they use their bill like a dagger and spear their prey quickly and efficiently.

Interesting Fact
It is common to have aggression among young chicks that are still in the nest. Quite often, larger chicks will kill their smaller siblings. This is called siblicide and is also common in raptors such as hawks and owls.

To spot great egrets, you just have to visit some local waterways such as ponds and coastal marshes. There you’ll see this egret slowly wading in the water or just standing still and looking for its next feed. 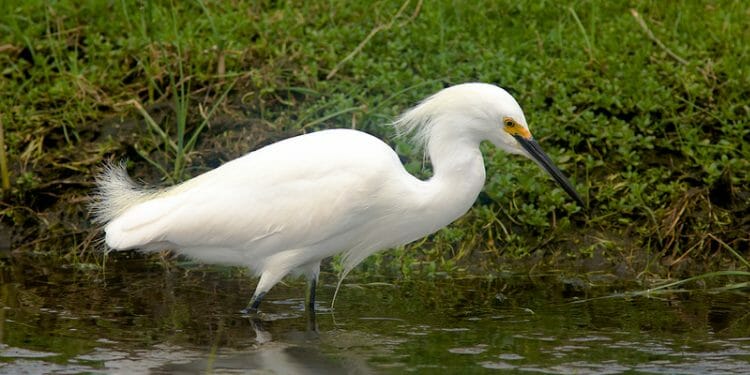 This is the smallest of the 4 egrets found in Florida. These birds have quite slender bodies, long legs and neck and long, slender bills. It can be found all year round along the waterways around Florida.

Like the great egret, these birds were almost hunted out of extinction due to their beautiful feathers that they grow during breeding season. In fact, in the nineteenth century, these feathers were sold for astronomical prices to the fashion industry. As an example, in 1886 these feathers had a going price of $32 per ounce. This was twice the price of gold back then.

Thankfully, these birds are now protected and their population has recovered.

Here are some of their more distinguishing features:

Being smaller than other egrets, you’ll sometimes see these birds running back and forth in the shallows with their wings spread out while they’re chasing their next tasty morsel. Their diet mainly consists of fish and small aquatic animals.

During nesting season, both male and female birds take turns sitting on the eggs and they both continue to care for chicks once they hatch.

Interestingly, research has shown that snowy egrets will sometimes mate with other heron species and the result is hybrid offspring. Known species that snowy egrets have mated with include cattle egrets, tricolored herons, and little blue herons.

The best place to spot these birds is along coastal wetlands and mudflats. These are the places that these birds like to frequent to search for food. 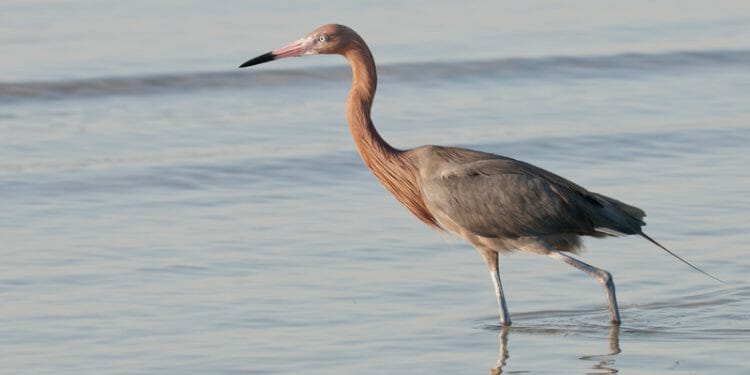 Reddish egrets are only found around the Florida coastline as they prefer to forage in saltwater. These birds are quite distinctive in their appearance and are very different to the other egrets on our list.

Here are their most distinguishing features:

These birds have an interesting habit of chasing fish through shallow water. They use various different tactics like swooping, creating shadows with their wings to attract the fish and then herd them toward the shore. In fact, they look quite comical as they run through the shallow water.

The white morph is generally quite rare but when breeding, it’s common to find one of either morph in a mated pair. This often results in chicks of both morph colors in the same nest.

The most common place to spot reddish egrets is in the Florida Keys. Look for their hunting antics at low tide along salt flats.

All species of egrets generally like to nest in trees and you can often find them on mangrove islands. Here they’re safe from animal predators and are happy to share suitable nesting sites with other herons as well as pelicans and spoonbills.

There are four different species of egrets that can be seen around Florida. Mostly, these birds are quite elegant with their lovely white plumage, long legs and long, sharp bills. However, the reddish egret can be quite comical as it darts around the shallows chasing unsuspecting fish.

You can find these birds mostly along the coastline, especially around mudflats when the tide is low. However, it’s more common to find the cattle egret further inland in large fields and grassland where animals like cows and horses love to graze.