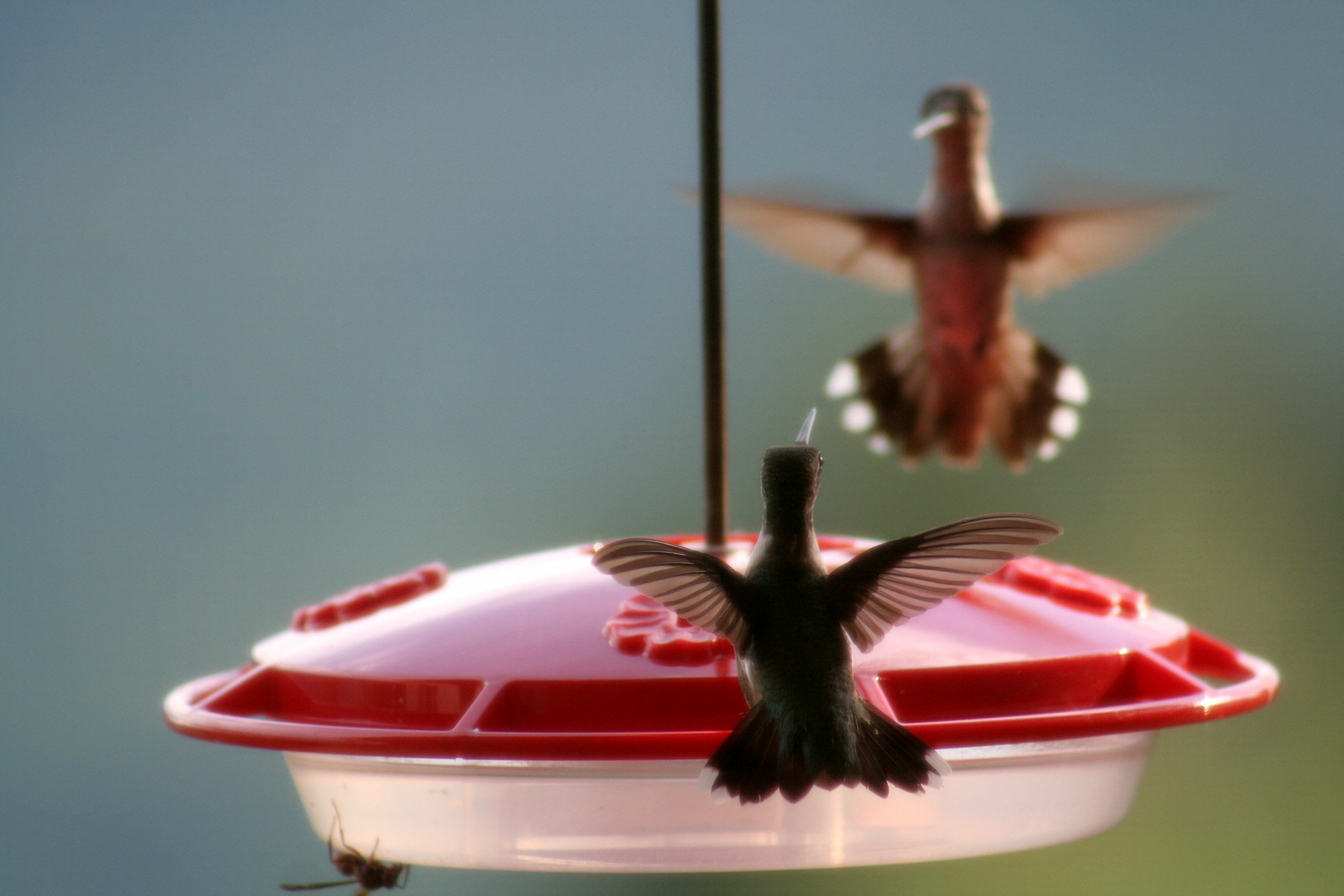 Hummingbirds are extremely territorial, especially during mating season. Although these pretty birds are so tiny, they are designed to fight for survival. It’s part of their nature.

You’ll find that a male hummingbird is more aggressive when it’s trying to establish its own territory. This is essential for mating and survival. Plus, hummers also fight to protect their food supply and for the survival of the young.

As mentioned, a male hummer can be extremely aggressive when he’s claiming a new territory. He will chase away any other males that venture into this newly claimed territory.

This is because the male bird wants to attract female hummingbirds to mate with. Once a female enters his territory, the male will put on a spectacular courtship display.

If the female is attracted to him, he will mate with her and then move on to the next female that approaches. Once mated, the female will build her nest in this territory and lay her eggs. She will then single-handedly raise the baby chicks.

A male hummingbird will mate with several females every season. It’s then his responsibility to keep intruders away from the area where the females are nesting and raising the baby chicks.

Although the male hummer takes no responsibility in the raising of the young, it’s not because he doesn’t want to. It’s primarily because the females won’t let him. Therefore, female hummingbirds are territorial when it comes to raising their chicks and will chase the male away if he comes near the nest.

This effectively ensures the survival of the species. 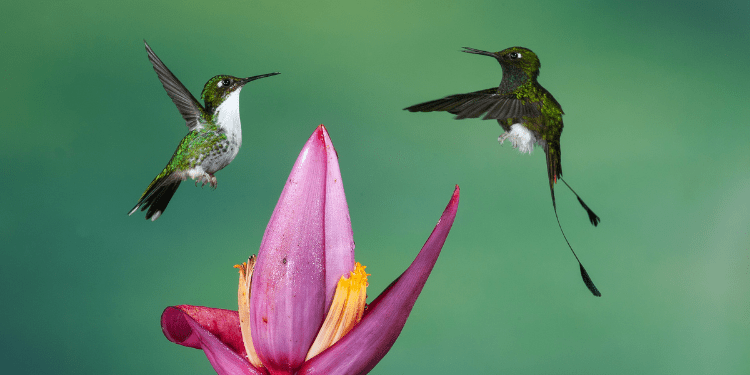 How Hummingbirds Protect Their Territory

Hummingbirds have amazing eyesight. To protect their territory they’ll perch near a feeder or other food sources to watch out for intruders. They will sit and watch for long periods at a time.

The first time they see an intruder, they’ll zip down to chase him away. Remember, they can fly extremely fast and will dive straight for the offending bird. They have the ability to do this over and over again.

Hummingbirds who are defending their territory may also be quite noisy. They emit loud noises such as chirps and buzzes to get the attention of the intruder. This is supposed to let the other bird know that the territory has already been claimed.

In addition, these tiny birds use threatening postures to scare off intruders. They can flare up their gorget to show off the bright colors. In the hummingbird world, this is a sign of strength. Hummers may also flare their tail, raise their wings or point their bill at the intruder.

Fighting Is The Last Resort

If the above attempts are not successful in chasing away the intruder, the tiny hummer will then use his sharp, needle-like bill and claws to attack the other bird. These fighting birds will often ram each other in mid flights. This can cause serious injury or even death in some cases.

However, fighting is usually a last resort but these battles can go on for hours.

This fighting does consume a lot of energy, so eventually, the intruder will get tired and leave to find another food source.

Interesting Fact
When a hummingbird gets ready to fight to protect it’s territory, it will puff up its feathers so that it looks larger than normal. This will make it look more fierce to any other birds that enter his territory.

3 Tips To Help The Hummingbird Protect Its Territory

Watching these tiny little hummers enjoying the nectar in your feeder can be a most enjoyable pastime. However, watching them fight and possibly seeing one of them get hurt, can definitely be distressing.

There are, however, some things that you can do to help your visiting hummingbirds protect their territory and stop them from fighting with intruders.

Remember, that if there are no feeders around, hummers will eat the nectar and pollen from flowers. Plus, lots of small insects, of course. Hummingbird are conditioned to understand that once a flower has been depleted of pollen and nectar, it takes time for other flowers to grow and provide another food source.

Hence, they don’t understand that you’re constantly topping up the feeder so that there will always be nectar available for them. Therefore, they think that they have to protect this food source before it runs out. 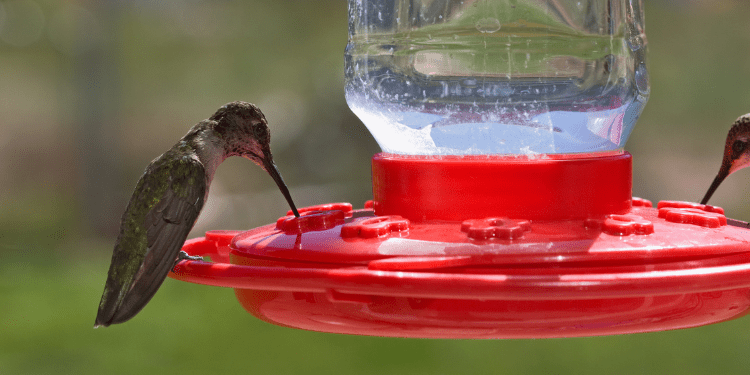 1. Put Out More Than One Feeder

If you only have one hummingbird feeder, you’ll find that you constantly have hummers fighting over this food source. So, rather than having 1 large feeder, consider putting out a few small ones, spaced well apart.

Make sure that you hang these out of sight of each other. This way, each feeder will allow a male hummingbird to claim it as his territory.

Observe your feeders regularly and if you still witness some fighting, try moving them further apart. Even if you happen to have a particularly dominant hummingbird visitor, he is unable to defend multiple feeders effectively.

2. Have Other Food Sources Available

Planting colorful flowers that produce plenty of nectar near your feeders will let the hummingbird know that there’s plenty of food available. This may well reduce the amount of fighting that you have to witness.

Remember that there’s only so much territory that each hummer can protect. So, if you have an aggressive male protecting one of your feeders, he may not notice another hummingbird who is feeding from the flowers that are some distance away.

If you witness a particularly aggressive hummer near your feeders, watch him carefully to see where he perches to keep an eye on his territory. Male hummers will sit for hours on their favorite perch to oversee their territory.

Once you’ve located the perch, prune off that particular branch. Often, this will force the hummer to find a less dominant position to oversee his territory. 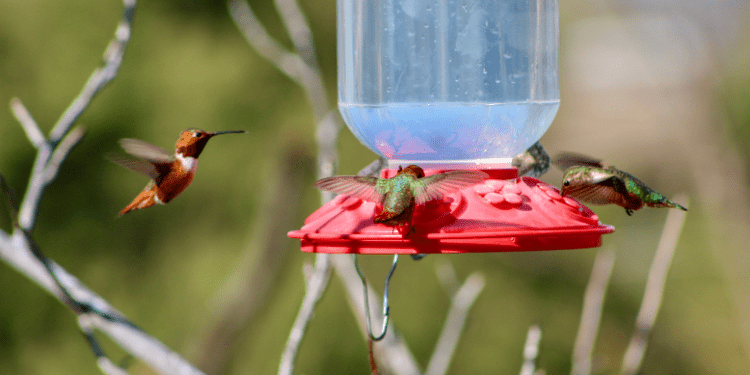 There Are Exceptions To This Territorial Fighting

Territorial fighting among hummingbirds primarily happens in spring after the birds have finished their migration and are establishing their territory. This is a completely natural occurrence and is designed to help the species survive.

Just before their migratory journey south in the early fall, adult hummingbirds need to increase their nectar intake to get ready for the long flight ahead. This will allow them to bulk up their body weight for the long journey.

During this time, most hummers are happy to share the same feeders as there’s no need for territorial fighting until the next mating season.

In addition, there are certain species of hummingbirds that are not migratory. These are generally more peaceful and don’t engage in territorial fighting as much.

Why do hummingbirds chase each other away from feeders?

Do hummingbirds hurt each other when they fight?

Generally no, but if they collide with each other mid-flight, some injury can occur.

How do you keep hummingbirds from fighting?

Fighting between hummingbirds is a natural occurrence but there are a few things you can do to dampen the behavior. If you find that you have a particularly territorial hummingbird visiting your yard, look to see where he perches to oversee his “territory”. Then, remove that branch or perch. Similarly, having more than one feeder and other food sources can relieve some of the territorial fighting.

Are hummingbirds territorial toward humans?

Generally, no, because humans are no threat to their mating or the raising of their young.

Do hummingbirds return to the same place every year?

Yes, they do. You’ll find that they’ll return to the same territory year after year to mate and raise their young. Most birds will even stop at the same places to feed during their migratory flights.

Hummingbirds are indeed territorial especially in the spring when it’s mating season. During this time, male hummers will be quite fierce in protecting their territory from other male visitors.

This allows them to mate with numerous females and helps to protect the food source, the nests and the baby chicks.

If you have an aggressive hummingbird defending your feeder, consider adding a couple of extra feeders out of site. This will allow more hummingbirds to visit your garden as the one bird cannot protect multiple feeders effectively.

Also, consider planting lots of colorful flowers in your garden both near and away from the hummingbird feeders. Having lots of food sources available, gives more birds the ability to feed without being chased away by a territorial bird.

Have you witnessed hummingbirds fighting around your feeders? Feel free to share your stories with us in the comments below.