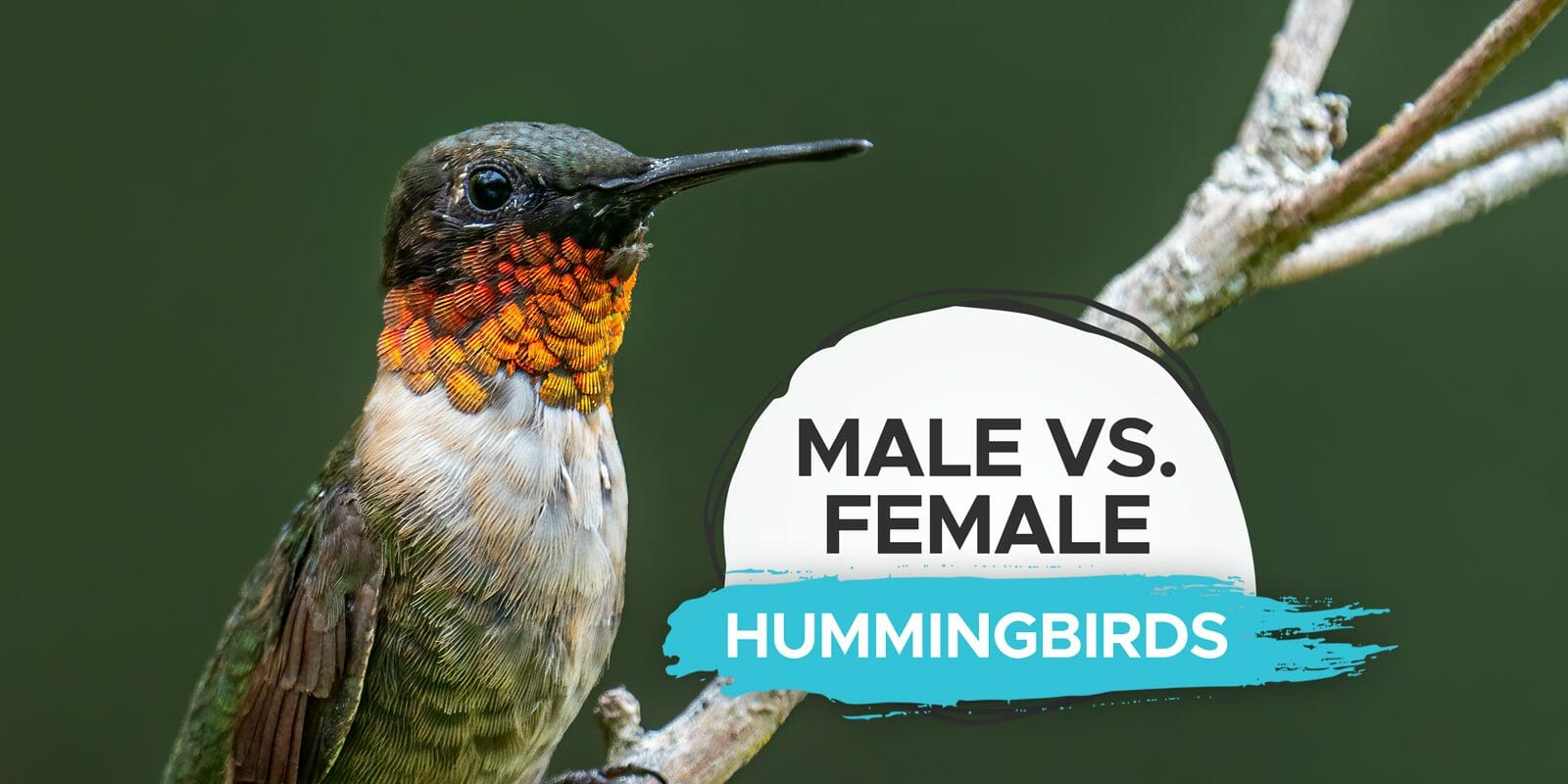 If you have hummingbirds feeders in your yard, you probably delight in watching these interesting little birds that come and visit your feeders. But, have you ever wondered how to tell the difference between a male and a female hummingbird?

In most cases, it’s really easy to tell whether you’re looking at a male or a female hummingbird simply by looking at the color of their feathers. You see, male hummingbirds are usually brightly colored while females tend to have only brown or green feathers. But, also understand that juvenile male birds will not have the bright colored feather until they reach maturity.

Male birds also have what is called a gorget. This is a patch of brightly-colored feathers on their necks. These usually shimmer and glisten in the sunlight.

To help you further with identifying male hummingbirds from the females of the species, let’s look at some of the more common species found all around America. 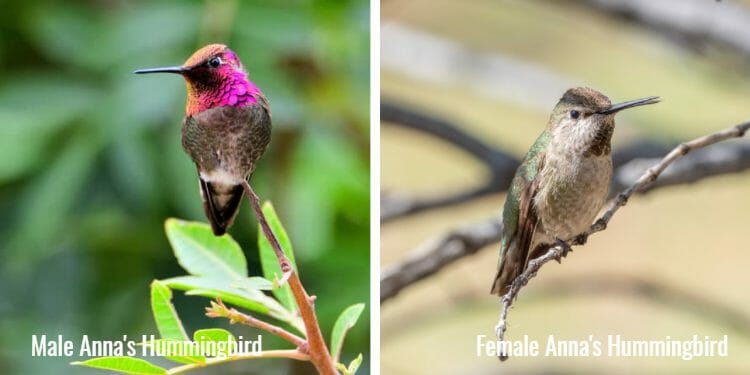 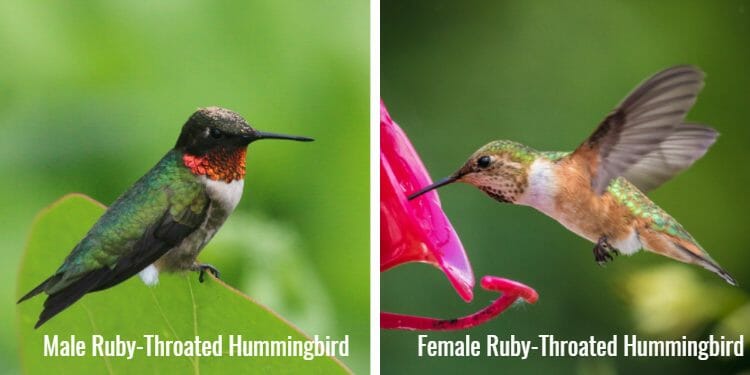 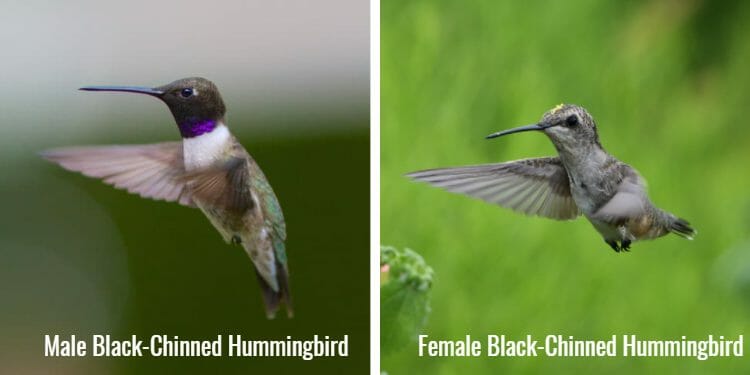 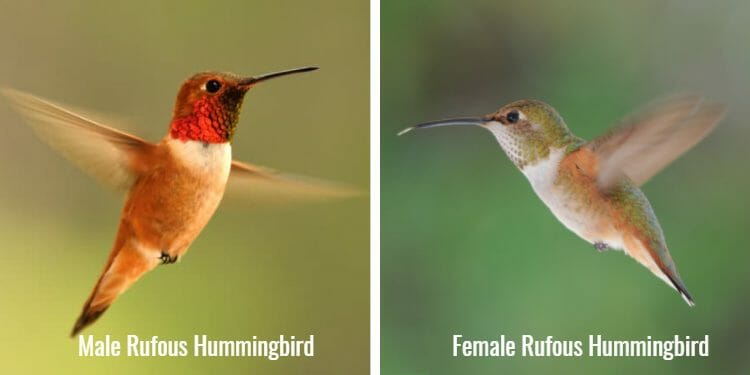 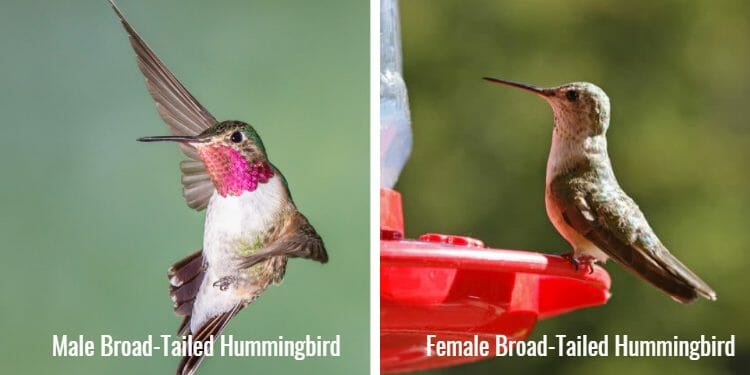 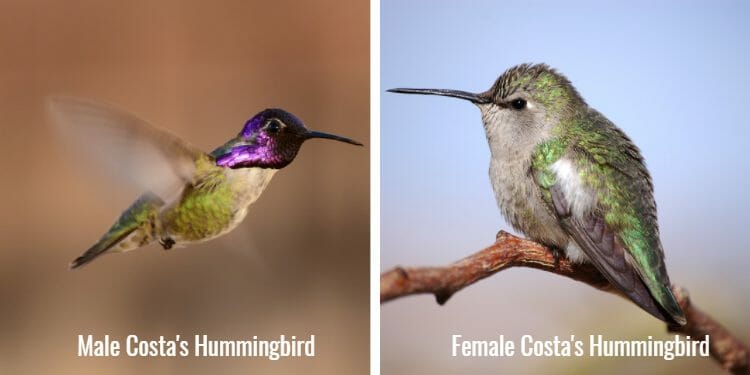 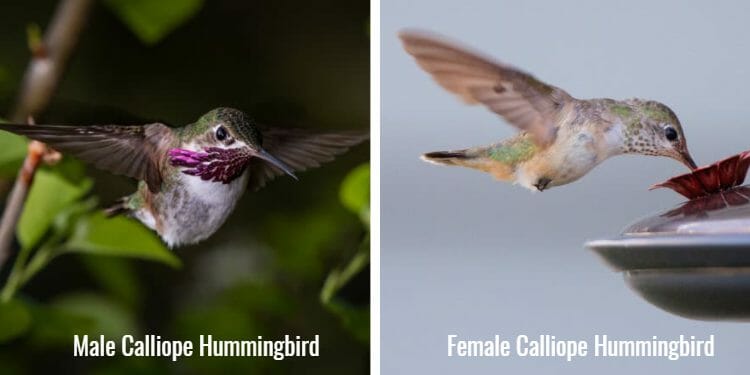 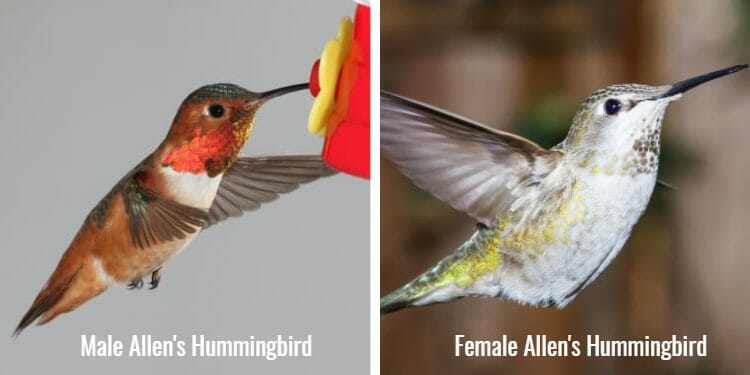 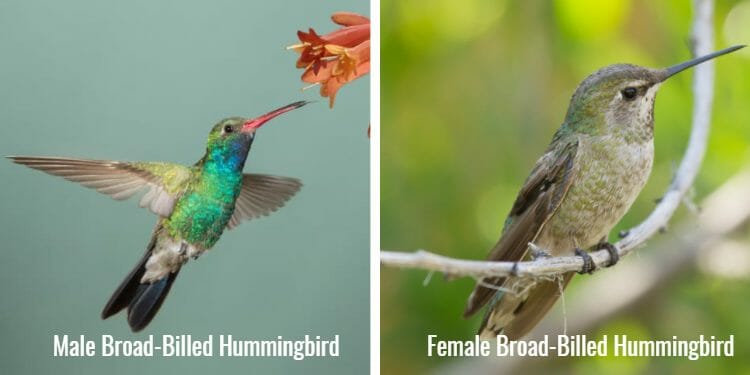 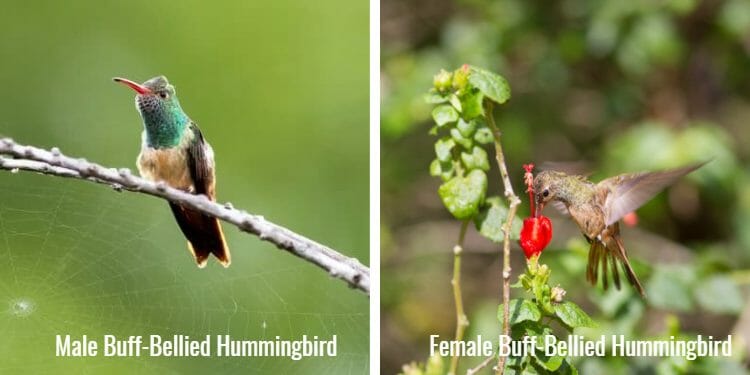 Why Are Male Hummingbirds More Colorful Than Females?

Another theory states that because females are the sole carers of their young, their muted colors help them to blend in with their environment. This makes them less susceptible to attacks from predators.

So, to recap, here are the main color differences between male and female hummingbirds:

Other Notable Differences Between Male and Female Hummingbirds

Apart from their obvious differences in color, male and female hummingbirds also have other differences. These include size, mating behaviour and nesting, as well as general behaviour.

In most instances, female hummingbirds are larger than their male counterparts. To give you an example, females weight around 2.8 to 4.5 grams while males will weigh around 2.4 and 3.6 grams.

The reason for the difference in size is because females are the ones who lay eggs and sit on the nest to brood. For this reason, they need to have slighter larger bodies so that they can adequately cover the eggs to keep them warm.

During mating season, it’s quite easy to tell male and female birds apart. The male is the one that puts an on amazing aerobatic display in order to entice a nearby female to mate with him. Sometimes, the female will join in with this mid-air dance. This is a clear indication that she has been impressed by his behavior.

When it comes to building a nest and raising the young, it’s all done by the female bird. Hummingbirds do not mate for life and once the mating ritual is complete, the male bird will fly off to find another female to mate with.

On the other hand, the female bird will build the nest, lay the eggs and tend to the young until they’re ready to venture out on their own. Many female birds will even chase males away from their nesting area. This is to protect their young from predators who might be attracted by the bright colors of the male bird.

You’ll find that male hummingbirds will be far more aggressive than their female counterparts. This is because they need to defend their territory and attract suitable females to mate with.

Quite often too, males will be more vocal than females. However, during nesting season, female birds will often emit different sounds such as chirps and trills in order to chase away possible predators.

Male birds also tend to create louder humming sounds with their wings than female birds. In fact, when male birds are trying to attract a female, they’ll flap their wings as fast as they can in order to produce the loudest sound.

Females are, of course, also capable of making that same humming sound. However, most times they prefer to sit and watch the performance from the male birds.

Most times, it’s not that difficult to differentiate male hummingbirds from the females of the species. The first important characteristic to consider is the color of the feathers. In all species of hummingbirds, the males will be far more colorful than the females.

Additionally, there are minor differences in size and general behavior that can alert you as to whether you’re looking at a male or a female humming bird.