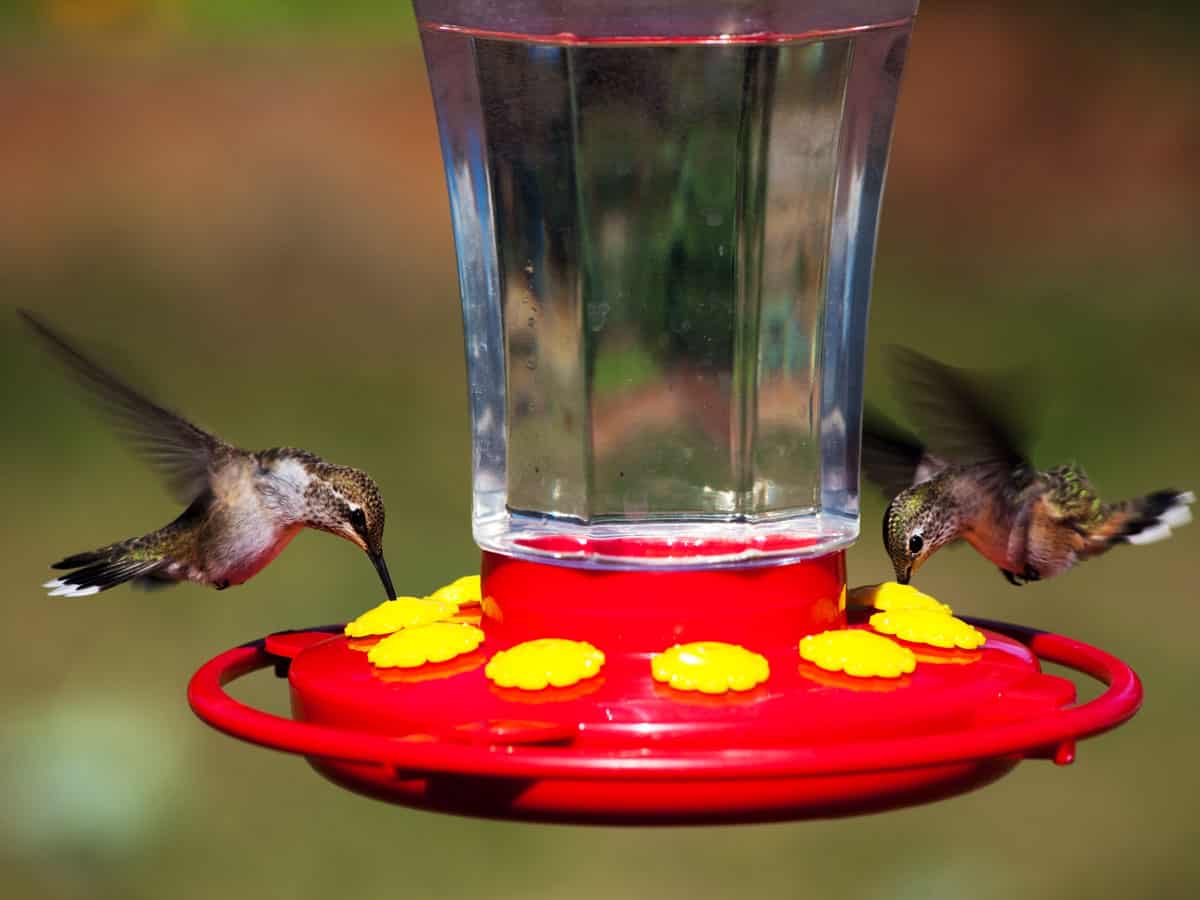 Hummingbirds are one of the most popular birds and one of the most welcome in people’s yards. We love to see them flutter around the garden and the feeders, but sometimes there aren’t as many as we have used to. Why does that happen?

The reasons can be various: from yearly migration and the birds’ other inherent behavior to the condition of feeders, other food sources and even predators like a praying mantis.

There are over 320 species of hummingbirds and they are all indigenous to North and  South America. The species mostly differ in size and color. The biggest is around 20 grams ( around 0.7 oz), and the smallest only weighs around two grams. Their bill is long in comparison to their bodies so that they could successfully suck nectar from the flowers.

The color of their feathers is usually very vibrant and striking in males (ruby red, shades of blue or green, orange, and so on) and when hit by sunlight the color appears iridescent, whereas the females are less colorful and their feathers are mostly in the shades of greyish brown with smaller colorful areas. This is explained by the fact that the females need to be less noticeable in the nesting season, and the males use their colorful vibrancy to attract females in the mating season.

They got their name due to the sound they produce while they are flying. They flap their wings so fast that it produces a humming sound, hence- the hummingbird. Their ability to hover or even fly upside-down (apart from the ‘common’ up, down, left, and right) is just one of the reasons they are people’s favorite to watch.

Why do hummingbirds stop visiting feeders

Let’s give a look at some of the reasons for fewer hummingbirds in your yard and how to fix the problem:

Hummingbirds are migratory birds and, based on a species, they have different migratory patterns. Most of the species, though, migrate from the north to the south for the winter, but some do stay in the same are all year round.

The migration happens in search for food, as some flowers that they like bloom in different parts of the year in different areas. For example, ruby-throated hummingbird migrates from the North of Canada as far as to Florida, and even South America in search for their favorite flowers.

So, if you are seeing less of them then maybe a couple of months ago, do not be alarmed, since it is probably just a normal behavioral pattern, and hummingbirds will return to North America in the spring. Some people consider putting up more feeders in the fall to keep them for migrating, but it just will not help. All you need is patience.

If you are keen to get to know which hummer visits your garden, check this out. The link contains details about each state and its most common inhabitant.

During the nesting season, you can also see less of them in your yards since the females will stay in the nests taking care of the eggs. The males are also known to leave the area in order not to make the food scarce for the females and the young ones.

Although very small and apparently charming, hummingbirds have been characterized as feisty and ‘quarrelsome’. In order to protect their territory, they have been known to dive attack bigger birds like orioles and blue jays, or even hawks.

Rarely, they will attack an animal, like a house cat that roams the yard freely, especially if it chases the birds  (which is the cat’s instinctive behavior). If your cat persists on hunting them, they are likely to move to the safer area with no natural predators around.

Also, the male hummers are very territorial and will try to fend off other males from a feeder that they consider their turf even if there is enough food to go around.  You can avoid this problem and bring more of the birds to come to your yard if you place several feeders at some distance from each other. Preferably, you should put the feeders up in such a way that hummingbirds who feed on one have a hard time seeing the ones feeding on the other feeder. For example, place them around the corner or in different heights.

Hummingbirds have many meals during the day as they have very fast metabolisms. They have a sweet tooth and their primary source for food are some flowers with nectar that contains over 10% of sugar.

One of the reasons that they have stopped coming to your yard is that there are gardens in your neighborhood that offer them ‘fresh food’- flowers. Besides putting up feeders, if you are available, plant some of their favorite plants and they will come to your garden more since they prefer natural sources to feeders. And they are also appealing to the human eye. Here are some hummingbird favorite flowers.

It is important to pay attention to your feeders as well. They need to be cleaned pretty often, and the nectar must never be spoiled. You should change the nectar every three to five days and even more often if the temperature goes over 90°F (around 32°C), or if you notice that the solution has become cloudy.

Another alarming issue when cleaning should be done right away is when you notice mold on the feeders. Mold is hazardous to the birds and can potentially be fatal. Clean the feeders with hot water and a bottle brush and do not use chemicals. Rinse them thoroughly and allow them to dry completely before putting them back up.

Are you wondering how to make the nectar for your feeder? It is really easy. Just mix sugar with water in 1 to 4 aspect ratio (a quarter cup of sugar to one cup of water). It is best to use white granulated sugar as opposed to organic sugar or honey. After you have filled your feeders, you can preserve the rest of the solution in the fridge.

Hummingbirds base their nutrition on nectar but they also eat insects, so you can place a banana peel or a rotting fruit close to the feeder. It will attract fruit flies which are a great source of protein for hummers.

Which feeder should you choose?

When picking a feeder one of the main things to consider is easy they are to clean. In order to clean them properly, you have to take them apart so try to pick one that has that as an option. Maybe choose one with transparent nectar bottle in order to better see the condition of the solution so as not to miss out o changing it if it goes bad.

Another important thing is how big they are. We have already said that hummingbirds are territorial, so it is maybe best to put up 2 or 3 smaller feeders instead of just big one. Besides, bigger feeders can attract bigger birds, and we already said that it can be stressful for the hummers.

The feeders can be plastic or glass. In this aspect, there are no preferences, as both serve the purpose perfectly. The difference is mainly in price. They come in the shape of a bottle feeder and a saucer, with or without a perch. The perch is not necessary because of their ability to hover, and it can attract bigger birds since they can’t hover, but it is easier for hummingbirds to perch upon a feeder.

Interesting thing is that the color of the feeder shows as very important. It doesn’t matter what your personal color preference is, go with the feeders that are red (shades of red and orange). The hummingbirds see color red most clearly, so they can spot your feeder from far away. The color to avoid is yellow because it can attract bees, and you should keep bees and other insects away from your feeders.

Place feeders in the shade and protect them from wind – the sugar water spoils more quickly and bottle feeders are known to leek in the sun. hummingbirds are brave little birds and will not shy away from your feeder even if it is on your porch or even window.

Some interesting facts about hummingbirds:

As we went through the possible reasons for hummingbirds avoiding your yard and gave you some ways you can attract them back, we hope that you will once more be able to enjoy the company of those adorable and fiery birds.