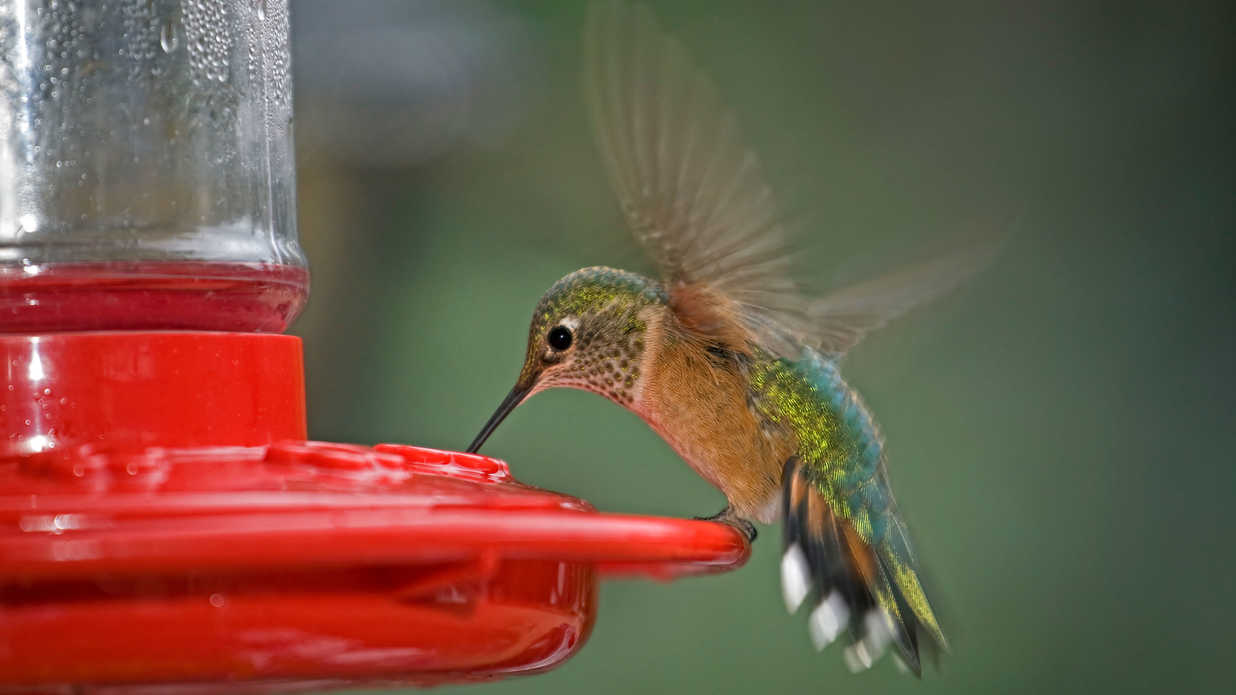 Hummingbirds are incredibly fascinating creatures. They are tiny; they are adorable; they are expert flyers, and they’re able to move in blinding speeds! Hummingbirds can be found in the wild, but sometimes, people can see them flying all over their backyard garden chasing after that sweet, delicious nectar. Honestly, I envy those people. I’d love to see a hummingbird in my garden early in the morning!

However, there is this tiny little detail regarding hummingbirds: they love red! Especially when it comes to food! But why is that so?

Well, I’m afraid there is no clear answer to that question. There several equally correct options, but I believe that it’s partly due to the way hummingbirds see color, and due to their amazing memory. Let us delve into the crimson mystery of the hummingbird food preferences!

Hummingbirds are members of the Trochilidae family, and their habitats can be found in North, Central and South America.

As you’ve probably had the chance to see, either in pictures in real life, they are incredibly small. On average, the size of a hummingbird goes from 7.5 cm (around 3 inches) to 13 cm (around 5 inches), but there are smaller: the bee hummingbird is only 5 cm long from beak to tail, weighing only 2 g!

They are called hummingbirds not because of how they sing, but because of the way they fly. You see, their wings move in incredible speeds, and such a movement produces a humming-like sound. Their amazing wing-clapping speed allows them to hover in place while they feed.

On average, their flapping speed is around 12 beats per second, in the largest species, reaching the astounding 80 beats per second in some smaller species. If we humans tried to move our arms that fast, we would lose our limbs almost instantly!

They spend massive amounts of energy, so they need to consume a lot of high-energy food to replenish their reserves. If the food in their habitat is scarce for whatever reason, they will enter a state known as torpor.

Torpor is similar to hibernation: it’s a state of deep sleep where hummingbirds are able to reduce their energy consumption and even their heart rate! A special hormone called corticosterone wakes the hummingbird from its torpor.

Hummingbirds are migratory birds. Those of the Northern hemisphere migrate to summer to spend winter there, while those of the south migrate northward for the same reason.

Their wonderfully resplendent plumage is what makes these birds particularly beautiful. The feathers vibrant color functions the same way those of the peacocks do: to attract females and establish dominance. Only the slightest movement can shift a hummingbird’s feather color, and the sight is just amazing! You see it for yourselves here.

You may have thought that they spend all their days moving around, but that isn’t really so. Most of their day they spend still, moving as less as possible in order to conserve energy. You’ll see them flying around only when looking for food, or defending their territory.

Regarding food, they eat small insects like mosquitos, fruit flies, gnats, even spiders and aphids. As we have mentioned, despite their small size, they spend great amounts of energy, so relying on eating insects for nourishment is not enough to replenish their energy reserves. That’s why they consume nectar in great amounts.

Nectar may be considered their go-to food source when it comes to fast energy. That’s why they can be seen flying from flower to flower, since that’s where nectar can be found, and they consume with the help of their special, partly elastic beak. Due to its high concentration of sugar, which has a high energy value, hummingbirds can easily “recharge their batteries” by eating nectar.

As a bonus, hummingbirds get covered by bird pollen when they feed, and they carry that pollen from one flower to another, thus helping flowers reproduce. Hummingbirds are just that great!

But what does all have to do with them loving red food?

Hummingbirds have a highly developed hypothalamus, meaning that their memory is amazing. It evolved in that way to allow hummingbirds to remember the places where nectar and all sources of food are in great abundance. This feature is crucial for their survival. Their high energy consumption puts them in danger of dying from starvation, despite their relatively long lifespan.

Their eyes are highly evolved as well, which enables hummingbirds to detect places with potentially abundant food sources and later on find them again. Scientists speculate that this may be one of the reasons why they are attracted to red so much.

Some hummingbird species see vivid colors with greater clarity than duller colors, so naturally, flowers of such colors, such as red flowers, tend to attract them more. Not all red flowers have the type of nectar they need, so scientists speculate that strongly-colored flowers may be used as a sort of a marker, or a beacon, so the hummingbirds can easily find their way to their feeding grounds.

Other evidence, however, suggests that this attraction to red-colored food may be some kind of conditioned response.

Namely, I order to attract hummingbirds so they can watch them and observe their habits (or to simply admire their beauty), people tend to buy bird feeders (see my top 10 here) colored brightly red, which they fill with water sweetened with white sugar. Since hummingbirds have developed a sort of a “nectar detector”, they’ll sense the sugar-rich food source in the feeder, whose red color will serve as a way to find it easily again.

So, it may be it’s because of their heightened sensitivity to colors from the yellow and red spectrums (which not all of the hummingbirds possess), or it’s because they’ve been conditioned by us, or simply because they like it, but one thing is certain: they love their nectar sources in red!

How to Attract Hummingbirds

If you are a fan of hummingbirds (like myself, for instance!), and you want to see these adorable little fairy-like birds flying through your garden, here are some useful advice on how to do so.

You can find some useful feeders here.

Bear in mind though – hummingbirds are not exclusively attracted to red food or brightly colored sources of food since they don’t feed exclusively on nectar. Some other ways to attract their attention is to add more feeders and make sure your garden has a lot of tasty insects to hunt.

Also, do not remove the spider webs – they love catching spiders in their webs by either hovering in front of it, or in-flight, and remember to add misters. Hummingbirds love to bathe, and if you manage to take a picture of a group of hummingbirds bathing in all of their splendor, then believe me when I say that you will have quite a picture to show!

And finally, make sure you that not all the flowers in your garden bloom in the same period of time. Flowers blooming in different seasons will ensure your garden always has some colorful flowers full of nectar for hummingbirds to snack on, so pick your flowers carefully!

Hummingbirds’ attraction to red, and strong colors in general does not apply to all the species of hummingbirds. In case of those that are attracted to red, it may be because of their using it as a memory marker for a place with plenty of food sources, or a traveling marker, or they picked it up in interactions with us humans, i.e. learning how to feed on the feeders.

The answers may differ, but one thing is certain: hummingbirds are majestic, beautiful, and very sensitive creatures.