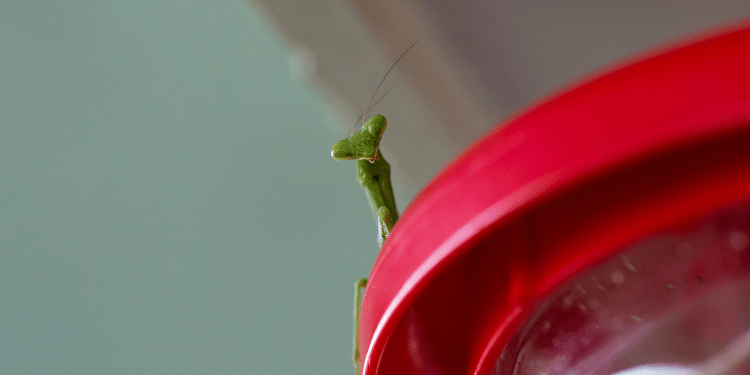 This might surprise you, but a praying mantis can indeed kill and eat a hummingbird. Only large mantises around 4 inches long have the capacity to catch a hummingbird, though.

But, if a mantis is hungry and a hummingbird comes into its range, it will likely strike out with its strong forearms and catch the little bird. Especially if the mantis is sitting in wait on low hanging foliage near the feeder.

Because the sweet nectar in your hummingbird feeder attracts flying insects such as bees and wasps, it’s the perfect place for a praying mantis to lie in wait for its next meal.

How Does A Praying Mantis Catch Its Prey?

Generally, mantises prefer to eat small insects but they will devour small lizards, frogs and mice too. They are, after all, carnivores. And, some mantises can grow up to 5 or 6 inches long. This is actually longer than the smaller hummingbirds that are only 4 inches long.

A mantis, however, doesn’t stalk its prey. Because of its camouflage capacity, it will just sit still for long periods of time waiting for something to fly by. The mantis will sit with its powerful forearms folded as if its praying.

This is the ideal position for it to strike when suitable prey comes near. Because a mantis sits so still and is easily camouflaged, quite often, hummingbirds will not see the predator until it’s too late.

A mantis will strike out with its strong forearms that have sharp spikes on them. These help to pin down its prey. In fact, it’s been noted quite a few times that a mantis will spear a hummingbird through the chest to secure it.

Once caught, parts of the prey is then devoured by the mantis before discarding the unpalatable remains. Mantises prefer to feast on the blood, organs and brains of the bird and leave the feathers, bill, bones, and feet alone. These the mantis will discard with a shake of its forearms.

Why Would A Praying Mantis Prey On A Hummingbird? 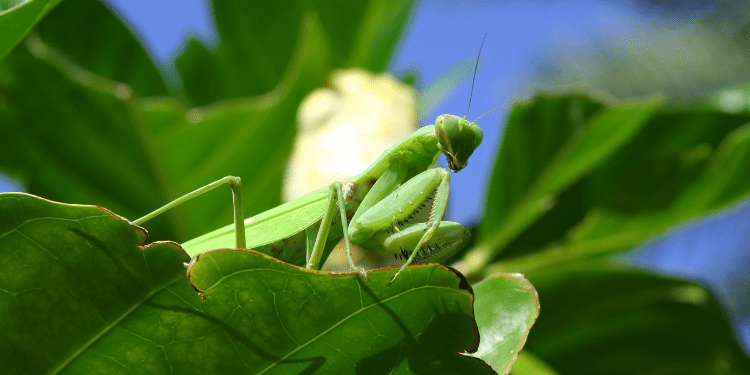 As I stated previously, mantises prefer to feast on smaller insects such as bees, wasps and spiders. So, why would it go after much larger prey like a hummingbird? Bear in mind that a hummingbird may roughly be the same length as a mantis.

Generally, mantises tend to go after fast moving prey like bees and wasps. But, as hummingbirds are also very fast, a hungry mantis may strike before it realizes the size of the prey.

How To Protect Hummingbirds From Praying Mantises

Predators like praying mantises, like to sit and hide on foliage near your hummingbird feeders. Or, they may even sit on the feeders themselves, hoping for some quick prey to feed on.

Fortunately, there are some precautions that you can take. Here are a few things you can do to deter mantises from around your feeders.

Why is there a praying mantis on my hummingbird feeder?

Praying mantises are attracted to areas where flying insects abound. The sugary mixture in your feeder is likely to attract insect such as bees and wasps which are a favorite food for mantises.

It’s not all that common for a praying mantis to capture and eat a hummingbird. But it can happen.  Therefore, your best bet to protect the little hummers visiting your garden is to be vigilant.

What is a praying mantis’ favorite food?

Is it OK to hold a praying mantis?

Despite their somewhat ferocious, predatory habits, praying mantises actually make great pets. You can safely hold them and there’s no fear of them munching on your fingers.

Praying mantises do indeed kill hummingbirds and eat them. Therefore, you need to be aware and check your feeders regularly to check that there are no mantises lurking nearby.

The best defense is to place your hummingbird feeders out in the open and away from shrubs and trees. This gives the mantises less hiding places and allows the hummingbirds a clear view of the feeder.

Additionally, using a wide cover on your feeder and also bee guards will deter other flying insects from your feeders. This will, in turn, make the feeders less attractive to praying mantises.