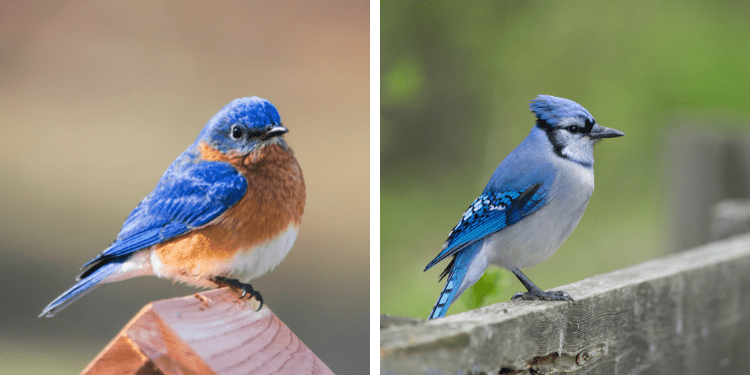 If you’re a bird watcher or have feeders in your yard, it’s not difficult to distinguish bluebirds from blue jays when you know what to look for. Apart from both species sharing the color blue, there are some marked differences between the two that are not hard to spot.

Bluebirds are generally smaller than blue jays and they are more timid and conservative. Their song is also more low-pitched and they are nowhere near as loud as a blue jay can be. Whereas blue jays can be quite aggressive when securing their territory or chasing other birds away from feeders, bluebirds will hold back or happily share with other birds.

Let’s look a little deeper at the differences between bluebirds and blue jays.

They Belong To Different Families

Blue jays belong to the Corvidae family. This also includes crows, ravens, rooks and magpies. In fact, there are over 120 species in this family. They’re commonly referred to as corvids.

This family of birds is categorized by their loud, harsh voices and their somewhat gregarious nature. They also possess a vibrant, glossy plumage and lack sexual dimorphism. This means that  both female and male birds share the same colored plumage and size.

On the other hand, bluebirds belong to the Turdidae family which includes many species of thrushes and also robins. The species in this family, which number over 175, are generally referred to as songbirds.

Unlike members of the Corvidae family, songbirds do exhibit sexual dimorphism. This means that the female birds are usually duller in color than their male counterparts.

Difference In Size, Shape And Color

Bluebirds also have a much smaller beak than the blue jays. This limits their diet to mainly small insects and fruit. They also have short legs and a large rounded head. The chest of the bluebird is quite sleek leading down to a plump stomach.

Conversely, blue jays are much larger and will grow to a length of 10 to 12 inches with a long, wide tail and longer feet than a bluebird. Their wingspan can reach up to 16 inches. Blue jays also have a slightly different body shape. They possess a thick neck and a broad chest.

They have a large strong beak that enables the bird to feast on all sorts of nuts, seeds and acorns.

Blue jays also exhibit a more striking coloring consisting of different shades of blue with black bands on their wings, tail and around their faces. Their undercarriage is also mostly white but can exhibit shades of pale blue.

Blue jays also have a major distinguishing feature that sets them apart from bluebirds. This is the blue crest on top of their heads. The crest is up when jays are being feisty, during courtship or while protecting their territory but will sit flat on their head when they’re relaxed. 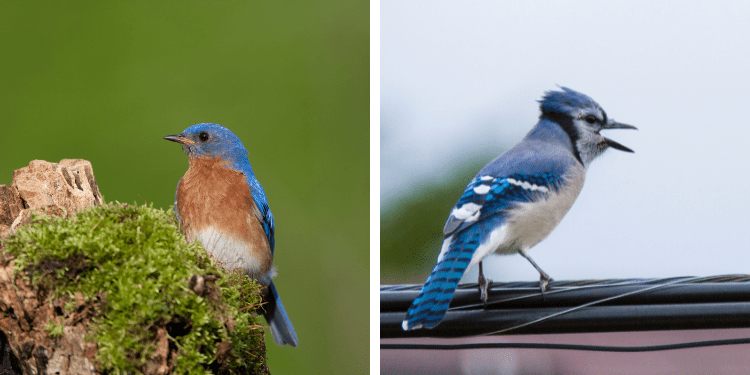 Difference In The Sounds They Make

Being corvids, blue jays have a very large repertoire of sounds that they make. This can include loud jeers, whistled notes and even gurgling sounds. Their “song” is much quieter and consists of a series of chucks, whirrs, clicks, whines, liquid notes and other elements. This can last for around 2 minutes.

Blue jays are also great mimickers and will often mimic hawks, cats and even the ringing of a cellphone. When they or their young are being threatened, they will snap their beaks open and shut in quick succession. This can be quite an aggressive display.

Bluebirds, on the other hand, are far more conservative with their song. It usually consists of a low-pitched warbling interspersed with some chattering and whistles. This only last for around 2 seconds.

Sometimes male birds will sing this song to attract a female. Female birds may also sing when they spot a predator nearby. It’s also common for the male birds to sing a much softer song during nesting season.

There are distinct behavioral differences between bluebirds and blue jays. Bluebirds are generally more laid back and solitary birds. They often perch in pairs in trees and shrubs. This allows them to scan the area for insects using their keen eyesight.

On the other hand, blue jays are loud, intelligent and inquisitive birds. They are also very protective of their nests and will dive at any intruders. This even includes domestic pets and humans. When threatened they will raise their crest and make raucous calls.

While jays will chase away other birds at your feeders to get the best morsels for themselves, bluebirds prefer to forage on the ground for seeds and insects. 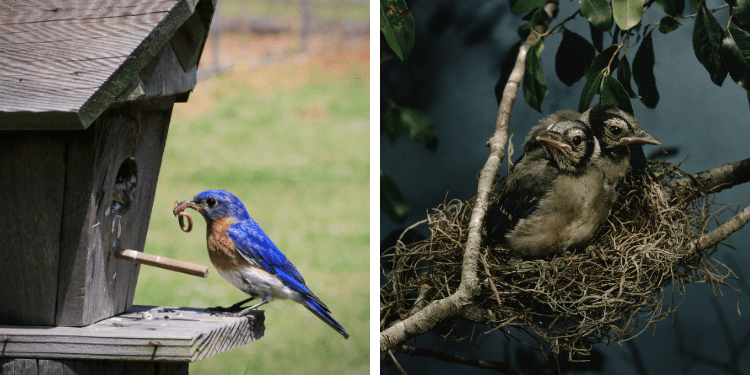 Blue jays, on the other hand, enjoy living in forests with lots of tall trees. Jays are also highly adaptable and will make their home in urban areas as long as there are plenty of mature trees available.

Although bluebirds and blue jays can be found in some of same regions, their main areas of habitation do vary. Here’s where they are commonly found.

Both bluebirds and blue jays have vastly different nesting preference. Bluebirds like to nest in cavities. They line these with small twigs, pine needles, grass and other nesting materials. They will also use nesting boxes that you may have in your yard. If you do offer nesting boxes, you should leave them out all year round as these little birds like to use them for shelter during the cold winter months.

On the other hand, blue jays prefer to nest in trees. They build their nests in the forks where branches meet the trunk, up to 20 feet above the ground. Both male and female jays work together to built a cup shaped nest. They use sticks, moss, bark and grass. To encourage blue jays to nest in your yard, you can erect a nesting platform that should be at least 8 inches square. Ideally, you should place this in the fork of a mature evergreen tree.

If you want to attract bluebirds and blue jays to your yard, you should offer different types of food. 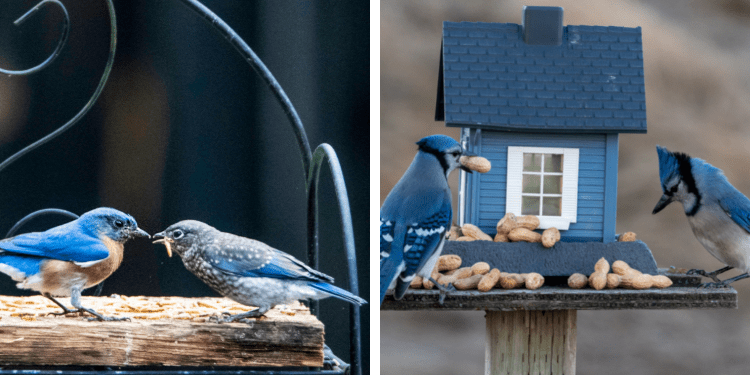 Is There Anything That Bluebirds And Blue Jays Have In Common?

There are a few commonalities shared by both bluebirds and blue jays. These include:

What color is the female bluebird?

Female bluebirds are generally gray. They have some pale orange on their breasts. Their wings and tails appear blue in the sunlight.

Bluebird babies have a bright pink skin when they first hatch. They may also have a few tufts of down on their bodies.

What colors are bluebirds attracted to?

In general, bluebirds prefer earthy shades and not the bright colors that other birds are attracted to. Their preference is for shades of green and brown.

Not sure if that blue bird that visits your feeders is a bluebird or a blue jay? By now you should easily be able to tell the difference and identify these birds when they visit your yard.

Bluebirds are smaller than blue jays and can be identified by their brightly colored chest which is either light brown or orange. On the other hand, blue jays have a distinctive crest on the top of their head which they exhibit when they’re excited or angry.

Blue jays are also far noisier than bluebirds and will often chase other birds away from your feeders. Jays prefer a diet of peanuts, sunflower seeds and corn. On the other hand, bluebirds prefer a diet of mealworms and suet. Both species will enjoy a little fruit too.

If you have some blue birds in your nesting boxes, these are indeed, bluebirds. Blue jays prefer to nest in the forks of trees high above the ground.

Do you have both bluebirds and blue jays visiting your yard? Are you able to easily tell them apart? Have you ever mistaken one for the other? Please feel free to share your stories with us in the comments below.