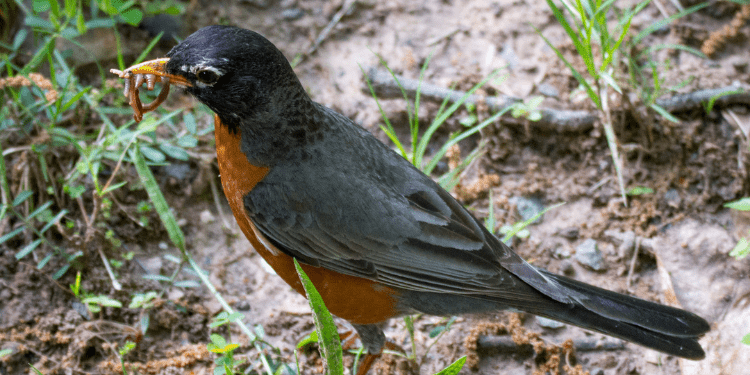 In your quest to learn all about the fascinating world of birds, you may be wondering how birds find worms? There are many bird species that like to eat worms to get the required protein in their diet. These include robins, thrushes, magpies and other omnivorous birds.

Through much research, it’s been determined that birds can locate worms just under the soil surface using three of their five senses. These include eyesight, hearing and feeling the vibration under their feet. The other two sense, taste and smell, are not frequently used as they are not well developed in most bird species.

Let’s take a look at these three primary senses in more detail.

As you are probably aware, most birds have extremely keen eyesight and can spot a handy food source from quite far away. A lot of birds, especially songbirds, have monocular vision. That is, they can see with each eye independently. In fact, when you spot a bird cocking its head, it’s actually turning one eye to look in one direction more closely.

Birds that use vision as their main sense for spotting a food source can notice subtle changes in the grass and soil as the worms tunnel around below the surface. It’s also quite easy for them to see a worm poking just a small part of its body out from beneath the soil.

Additionally, as worms consume available food within the soil, they’ll leave their castings on the surface. These are quite easy for birds to spot and generally indicate that there are worms beneath the surface.

Using Their Sense Of Hearing To Establish Movement

As well as a keen eyesight, a lot of songbirds also have a well-developed sense of hearing and can hear sounds that are not audible to humans. They can actually hear particles of soil rubbing together as the worms make their way through the tunnels they create. 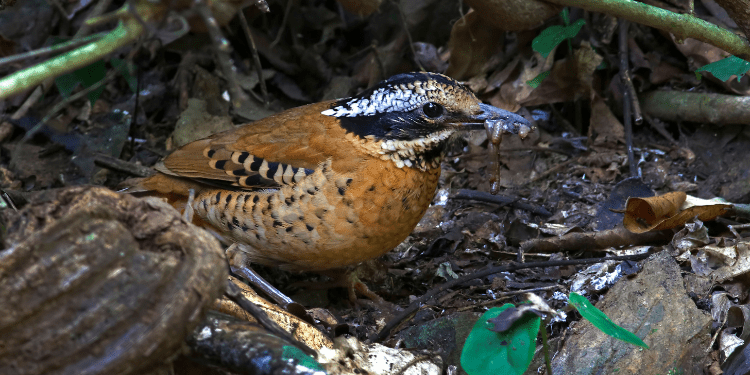 Using Touch To Feel The Movement In The Soil

Many birds who forage for worms, will spend extended periods of time just walking around. It’s believed that during this time, many birds can feel the subtle movements under their feet that indicate a presence of worms under the surface.

You see, bird feet are actually quite sensitive and hence, they can pick up these subtle movements of the soil under their feet.

Additionally, some birds such as blackbirds, have very sensitive beaks and will use these to probe the ground when they’re looking for worms. Their beaks are easily able to feel the movements made by worms as they tunnel through the soil.

Interesting Fact: One bird, the kiwi, has nostrils at the tip of its beak and is indeed, able to use smell to detect worms, even from a distance.

Why It’s Said That The Early Bird Catches The Worm

You might have wondered why it’s common to hear the saying that the “early bird catches the worm”. One interesting reason for this is that worms tend to move closer to the surface of the soil early in the morning while the temperature is still cool and there might be dew on the grass.

Interesting Fact: A robin is capable of eating a massive 14 feet of worms in just one day.

Another great time for birds to find worms easily is just after it rains. You see, worms tend to make their way to the surface because it’s believed that they find the movement easier than tunneling through the wet ground.

Another speculation is that the rain drops hitting the ground is similar to the movement that worms feel when there are predators such as moles nearby. Therefore, to escape these possible predators, the worms make their way to the surface.

Unfortunately for the worms, there may be a few foraging birds around who’ll find the worms a very tasty treat. 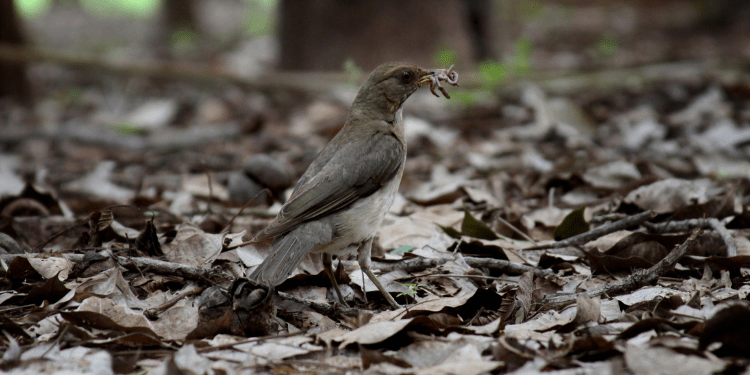 What Makes Worms Such A Great Food Source For Birds?

There are two primary reasons that worms are favored by many birds as a great food source.

1. Worms Are High In Protein

Just like other animals, birds need protein in their diet to maintain muscle. Baby birds, especially, need a high protein diet so that they can grow quickly.

It is believed that 60% to 70% of a worm’s body consists of protein. Therefore, worms make a very healthy snack for many different bird species. And, you’ll also find that mother birds will seek out worms to feed to their babies.

2. Worms Are Easy To Find

In most cases, birds find it very easy to find tasty worms to eat, especially after a period of rain. This means that worms provide a plentiful food source for these birds.

In the right soil conditions, worms can reproduce fairly quickly. This means that there will always be plenty of worms available for birds to feed on.

Which Birds Primarily Feed On Worms?

As stated previously, not all birds like to feast on worms but there are a few species that will favor worms over other food sources. The include:

Of all the worm-eating bird species, you’ll find that the robin and the blackbird are the most common birds that you’ll find in your garden foraging for worms. 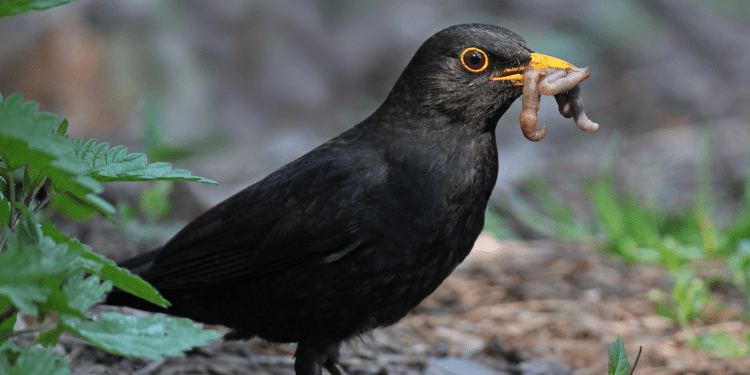 If you’re a bird lover, you’ll undoubtedly want lots of different birds visiting your garden. For this to happen, you have to ensure that there’s plenty of food available so the birds happily hang around.

Here are some tips to make it easy for visiting birds to find worms in your garden.

A lot of birds don’t have a very good sense of smell. Therefore, most birds use their keen eyesight to spot worms that are close to the surface. Many birds can also hear worms moving through the soil.

Do all birds eat worms?

Not all birds eat worms. It depends entirely on the species as a lot of birds prefer to eat nectar, seeds, nuts and fruit.

Why do birds eat worms?

Birds eat worms for protein. Plus, worms are generally easy to find and catch.

If you’ve ever wondered how birds can so easily find worms to munch on in your garden, you now know the answer. The most common bird species that favor worms as their food source include robins, blackbirds and thrushes.

Birds will mostly use three of their five senses to locate worms for them to eat. Most birds will use their amazing eyesight to watch the grass and soil for evidence of worms poking through or deposited castings on the surface.

Even more amazing is a bird’s sense of hearing. They can hear particles of soil rubbing together as a result of worms digging tunnels beneath the surface. In addition, a bird’s feet are highly sensitive and they can feel the vibrations underfoot as a worm tunnels along through the soil.

Luckily for birds, when it rains, the worms will often make their way to the surface and this is then an easy time for birds to grab them for a nutritious snack.