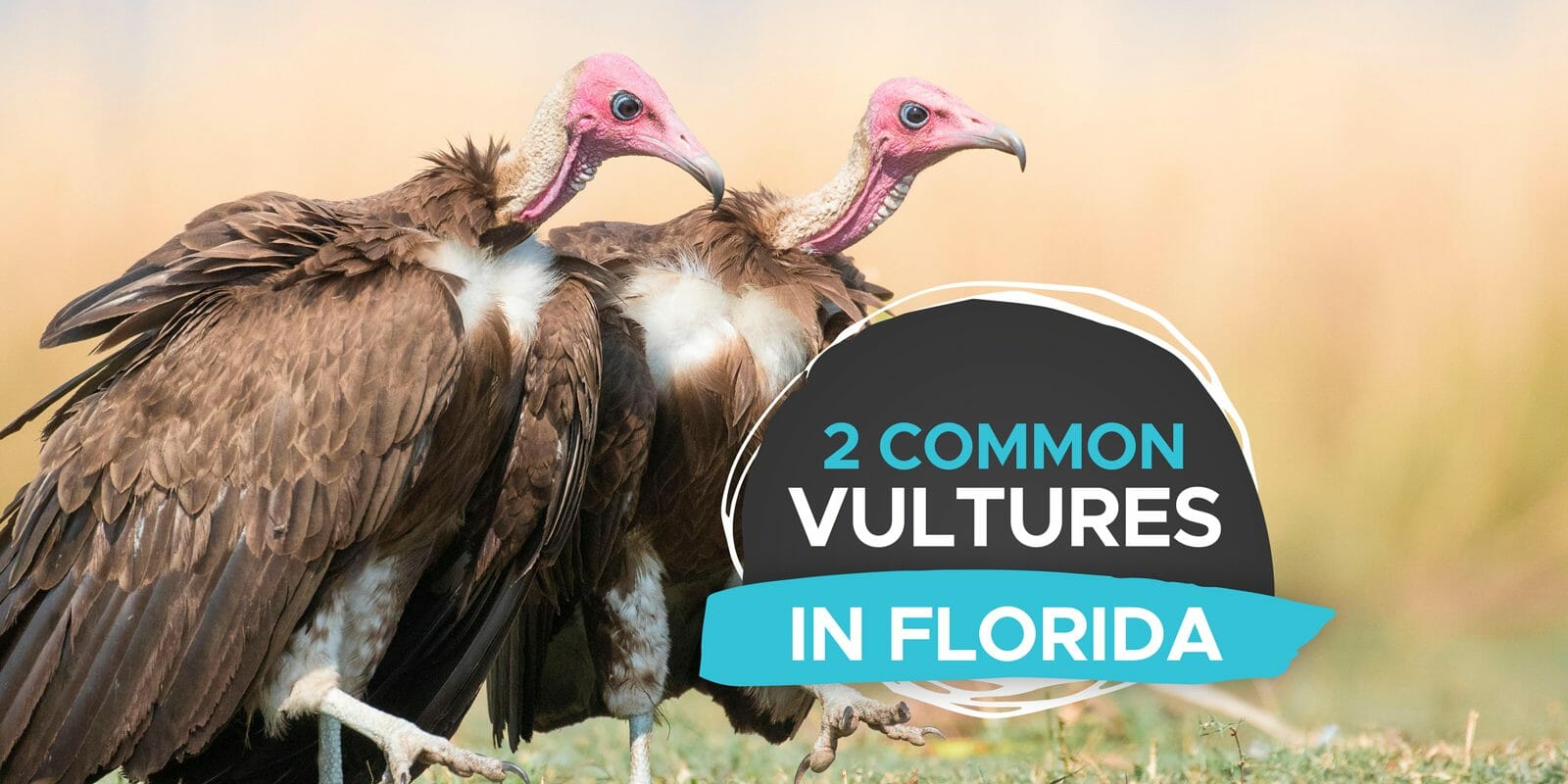 Vultures aren’t necessarily very attractive birds. However, they play an important ecological part to help keep our environment clean and free from diseases such as rabies and tuberculosis. The reason for this is that they feed on carrion or dead animals that other predators won’t touch.

There are currently two species of vultures that are commonly found in Florida. The turkey vulture and the black vulture and these are fairly easy to distinguish from each other.

These large birds are perfectly designed by nature to clean up dead animals on the side of the road. Firstly, they have no feathers on their heads or necks. This helps the birds to stay relatively clean when they push their heads into a decaying dead animal.

Secondly, these birds have special acids in their stomach that protects them when they’re exposed to nasty bacterial and fungal diseases like rabies, botulism, anthrax, black plague and distemper. For this reason alone, we should revere these birds for helping to clear up our roadsides and stop the spread of some very undesirable diseases.

The two species of vulture commonly found in Florida are quite easy to distinguish from each other because they have some very different features. To start off with, here are some interesting facts about both birds.

As you can see, these birds are fairly comparative in size and weight although the black vulture is slightly heavier and more stocky. 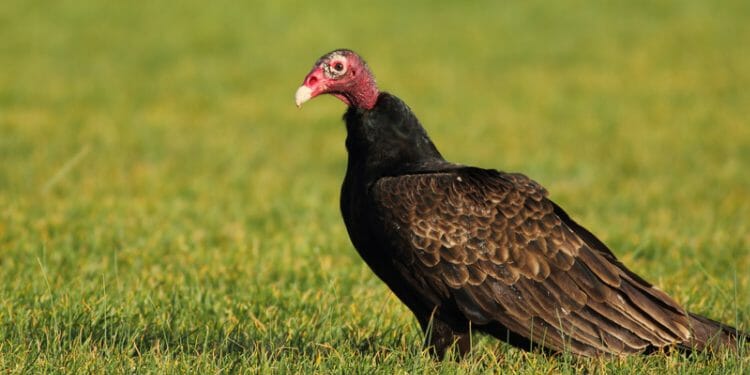 As you would imagine from the name, these vultures look a little similar to wild turkeys. Their feathers are black or dark brown all over but they have a distinctive bald red head and a light pink beak. Turkey vultures also have pink legs and feet that are featherless.

When they fly, these birds raise their wings higher than their body. This creates a V-shape which is quite easy to spot when you’re on the ground below. Researchers believe that this style of flying allows the birds to soar closer to the ground. This, in turn, helps them to smell out possible food sources.

Did you know that turkey vultures have a highly developed sense of smell? In fact, they can detect the scent of dead meat from around eight miles away.

Contrary to popular belief, these birds really do prefer their meat as fresh as they can get it. Therefore, they try to get to an animal that has been killed as quickly as they possibly can.

Interesting Fact
Because turkey vultures are black, they absorb the heat quite easily. In order to keep themselves cool, they actually defecate on their legs. This helps to cool their blood and helps them to moderate their body temperature. Gross but true! What this also does is clean their feet to remove any bacteria that they may have picked up while feeding on carrion.

The best place to spot one of these birds is on country roads where’s there’s likely to be a lot of road kill. Turkey vultures prefer to fly around above open countryside that allows them to easily spot any possible food below.

When nesting, the female turkey vulture usually lays two eggs but will sometimes only lay one. These birds will generally nest in hollows and crevices in rocks or trees. It takes around 40 days for the eggs to hatch. The chicks are fed by both parents for around 11 weeks.

Interesting Fact
When a turkey vulture is confronted by a predator, it can not fly away quickly if it’s just had a big meal. In this case, the vulture will projectile vomit its stomach contents at the predator’s face so that it can fly away. This can easily blind the predator. Another gross fact! 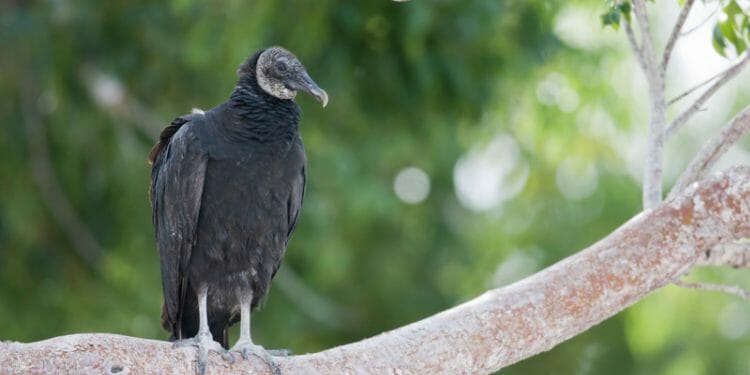 As the name suggests, black vultures are black all over including their bare heads. Their beaks are quite large and gray in color. However, if you see one of these birds in flight, you’ll notice that the underside tips of their wings actually have silver feathers. Black vultures are also slightly shorter than turkey vultures and can look a little stockier when they’re flying above.

Unlike turkey vultures, black vultures will hold their wings out flat when they’re in flight. They also tend to fan out their tails.

Interestingly, unlike other vultures, black vultures actually prefer their meat fresh though they will still feed on carrion. However, they will also kill live prey such as opossums, skunks, calves, piglets and lambs. The living animals that these birds target for their prey are usually the weakest and some may even be dying already.

Interesting Fact
Black vultures are monogamous and will mate for life. They’re also very good parents and will protect their young fervently. These birds also nest on the ground using brush piles, caves, thickets, stumps or hollow trees for their nesting sites.

The best place to spot these birds is in open areas and high up in the trees of dense forests where they like to roost. However, they generally forage for food in open fields and along country roads.

Black vultures are also quite used to humans and you can often see them at garbage dumps and around fishing docks.

At times, some of the more aggressive black vultures will actually chase the turkey vultures away from the food source so that they can have it all to themselves.

Black vultures are also far more social than turkey vultures. They often travel in large flocks and you might see them in large communal roosts high up in the trees.

When nesting, the female bird usually lays 2 eggs that take around 45 days to hatch. Once hatched, the babies are fed by both parents for around 8 months. However, the youngsters will often stay in a family unit with their parents for many years.

Do Vultures Make Any Bird Sounds?

Vultures are definitely not melodic and don’t actually make any typical bird sounds. They actually don’t have a voice box. Their only vocal method of communication is through raspy hisses and grunts.

Some More Interesting Facts About Vultures

Love them or hate them, vultures are part of the natural world and serve a very important purpose by ridding the landscape of decaying animals. That’s why they’re a protected species and cannot be harmed or killed. Here are some more interesting facts about these birds.

If a farmer sees vultures hovering above a certain field, it may indicate that one of the animals is giving birth. And the reason the vultures are circling is because they’re waiting for the afterbirth. In this case, obviously their strong sense of smell has alerted them to the fact that the animal is birthing.

Unfortunately, when these birds inhabit urban areas, they tend to cause a fair bit of damage to property. Remember, they have sharp talons and will often use these to cut through pool netting. They also tend to defecate over everything and given their diet, this does not have the best odor. Not to mention their habit of projectile vomiting if they feel threatened.

Vultures are the garbage collectors of the animal kingdom. This makes them an important part of any ecosystem. They clean up dead and rotting carcasses and, as a result, reduce the possibility of nasty diseases making their way into populated areas.

These birds may not be all that attractive to look but they serve a very important purpose in the overall scheme of things.