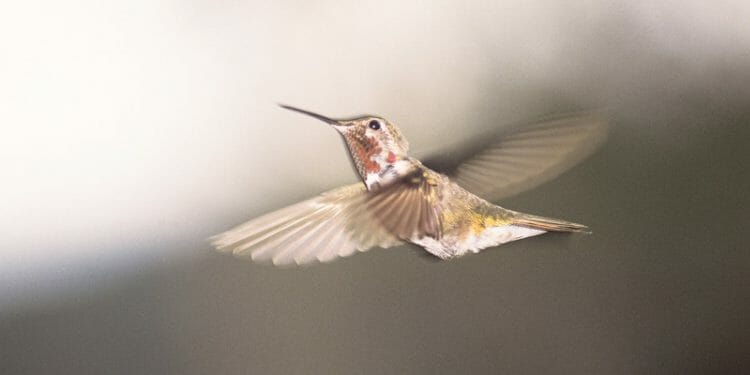 By now you would be aware that hummingbirds are the acrobats of the sky. These amazing little birds cannot only fly forwards but they can fly backwards and sideways as well. Plus, they are even capable of flying upside down. You might be wondering though, how high hummingbirds can fly.

Hummingbirds have been known to fly as high as 500 feet above ground level. They would normally fly this high when they’re migrating. However, generally they prefer to fly just above the tops of the trees as this gives them more protection from predators.

The Amazing Flight Of The Hummingbird

Unlike other bird species, hummingbirds have amazing abilities when they fly. Not only can they fly in a forward direction, but they can also fly backwards and sideways. Plus, they can fly straight up at enormous speeds. This is quite commonly seen when the male birds are performing their courtship displays.

Hummingbirds can also hover for an extended period of time while they’re in flight. Plus, they can perform other acrobatic feats while in mid-air such as backward somersaults.

Here’s why hummingbirds are such amazing flyers.

They Have Hollow Bones

Hummingbirds have hollow bones and their vertebrae and pelvic bones are fused. This eliminates excess muscles and ligaments and reduces the bird’s weight.

They Have Large Pectoral Muscles

Their pectoral or chest muscles are quite large in proportion to their bodies. In fact, they account for around 25 percent of the bird’s body weight. These enlarged pectoral muscles are responsible for the movement of their wings.

They Have Tiny Feet And Short Legs

You might be aware that hummingbirds have short legs and tiny feet. That’s why hummingbirds are not adept at walking or hopping like other birds. This hummingbird feature reduces drag and gives the bird a more aerodynamic shape.

They Have Strong Bones In Their Wings

A hummingbird’s wings contain a number of long, strong bones. These help to keep the wings stable and allow greater precision in movement.

They Have An Enlarged Heart

Hummingbirds have a large heart that can beat up to 225 beats per minute. This allows them to beat their wings furiously and helps to move oxygen around their muscles more effectively. 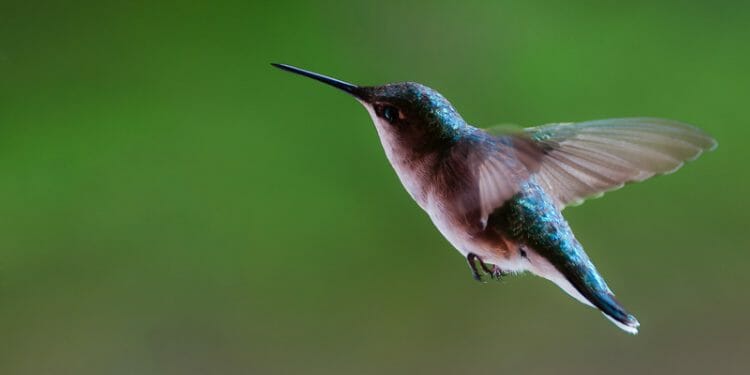 How Hummingbirds Beat Their Wings

In fact, if you were to observe a hummingbird hovering in slow motion, you would notice that their wing tips move in a figure 8 configuration. This gives them their unique ability to hover far longer than other birds are able to.

Hummingbirds can also twist the angle of their wings even minutely. This allows the birds to change direction almost instantly and without changing the speed of their flight. You might have been lucky enough to see a courtship display of a male hummingbird where the bird will fly straight up and then plummet straight down at an alarming speed.

But, just before hitting the ground, the little hummer pulls up almost to a standstill still beating its wings super fast and hovering. All this use of excessive energy explains why hummingbirds are such voracious feeders.

How High Do Hummingbirds Fly During Migration?

During their migratory journey which can last sometimes 18 to 22 hours, hummingbirds have been known to fly around 500 feet above the ground. Some migratory hummingbirds can fly around 1200 miles non-stop when they migrate from the East Coast of the US to Central America.

During these flights they have to cross the Gulf of Mexico, so there is nowhere for them to land and refuel. Therefore, they just have to keep going until they reach their destination. And interestingly, because they’re not very social birds, they’ll generally take this journey on their own rather than in a flock. 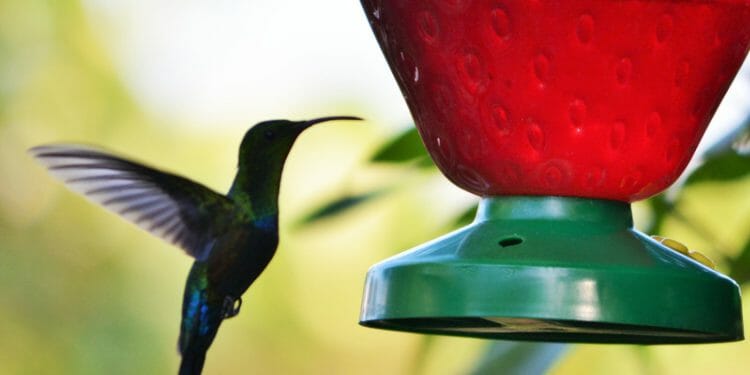 Even if your feeder is a fair way off the ground on the balcony of an apartment, hummingbirds should still be able to find it. Especially, if you do a few things to attract their attention. Here’s what you should do:

Yes, hummingbirds can reach speeds of twenty to thirty miles per hour. Plus, they can easily triple this speed when they’re putting on their courtship displays.

Do hummingbirds fly high or low?

Hummingbirds will fly high or low depending on what they’re doing. They’ll often fly quite low when they’re looking for nectar or insects to feed on.

Why do hummingbirds fly so close to me?

Hummingbirds are by nature, curious. Quite often, they’ll fly up to a person’s face because of curiosity.

Hummingbirds are considered the acrobats of the sky. They fly at amazing speeds and hover almost constantly while they’re feeding. Hummingbirds have been seen flying as high as 500 feet above the ground, especially when they’re on their migratory journey.

However, hummingbirds can also fly quite low when they’re looking for suitable food sources. More often than not, you’ll see them hovering at eye level while they’re gathering the sweet nectar in your feeders or from the flowers in your garden.