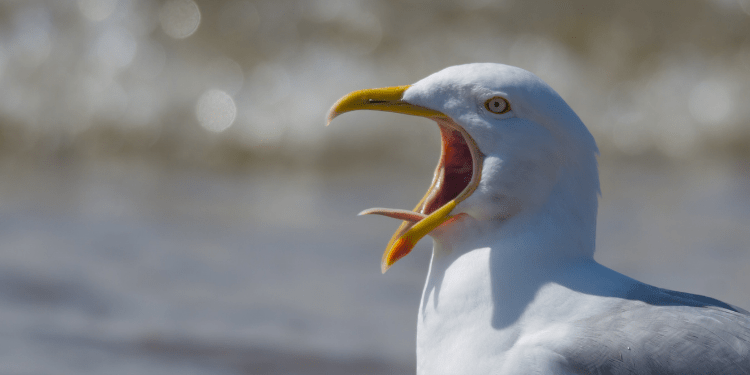 As a keen birder, you may have wondered whether birds have tongues. To answer your question, all birds do indeed, have tongues. In fact, most bird tongues look very similar to human tongues, although they generally serve a different purpose.

These barbs help to push the food they collect down to their gullet. This is because birds don’t swallow the way that we humans do.

General Physiology Of A Bird’s Tongue

All bird tongues have different physiological characteristics. Let’s look at these in a little more detail.

All birds tongues have bones and cartilage. This allows easy movement of the tongue and is referred to as the hyoid apparatus. Larger tongues will have well-developed bones while small tongues may only be composed of cartilage.

The epithelium is the layer of cells that cover the bird’s tongue. Some birds have tongues with a hardened layer at the tip. This is called the lingual nail.

This is the hardened tip on the tongue of some birds like parrots, ducks, swans, geese and chickens. It’s made from keratin and allows these birds to use their tongue like a spoon to gather up seeds and grains.

The papillae are the barb-like structures that are found on the tongues of birds of prey and geese. These barbs are backward facing and allow the movement of food down to the gullet.

All bird tongues have salivary glands. Just like human tongues, these produce saliva to protect against bacteria and germs. The saliva also helps to wet the food and allows it to breakdown more easily.

Just as bird tongues come in many different shapes and sizes, they also come in different colors and some even have distinctive markings. Some birds have tongues with spots on them or even colored bands. Bird tongues have been identified in various colors such as black, pink and blue.

Due to the huge variety of bird species on the planet, you would assume that their tongues would be different too. This is because different species have different diets. Let’s look at some of the more interesting tongue configurations and uses. 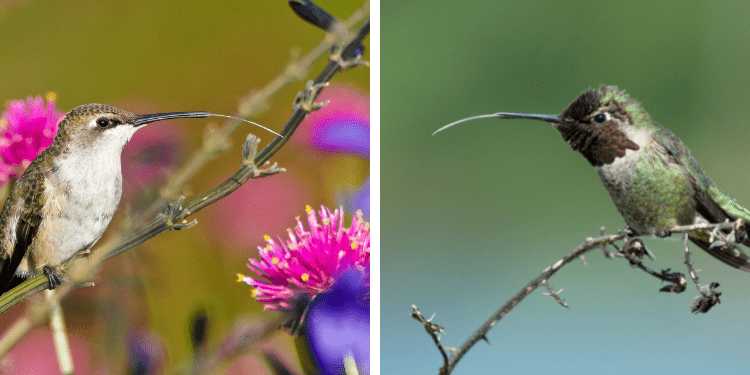 Hummingbirds have very long, thin tongues that are forked at the tip. This is so that they can easily reach into flowers to gather the nectar that they love.

Interestingly, the forked tips of the tongue are usually curled longitudinally, just like a straw. Once the bird puts its tongue into the nectar, the ends uncurl and then curl up again when the bird withdraws its tongue.

This allows the bird to gather as much nectar as possible each time it dips its tongue into a flower or hummingbird feeder. It is thought that the hummingbird then uses capillary action to get the nectar up the tongue and then down into its gullet.

Woodpeckers also have rather long tongues that can extend well beyond their beak. Some woodpeckers have barbed tongues while for others, their tongues are coated with a sticky fluid.

This allows the birds to reach into tree crevices and under bark to easily snag some insects for their dinner. They can even use the tiny barbs on their tongues as spears to catch these insects.

Birds of prey such as hawks, eagles, owls and vultures have larger and more fleshy tongues. This is because they generally tear apart their prey with their beaks and talons. 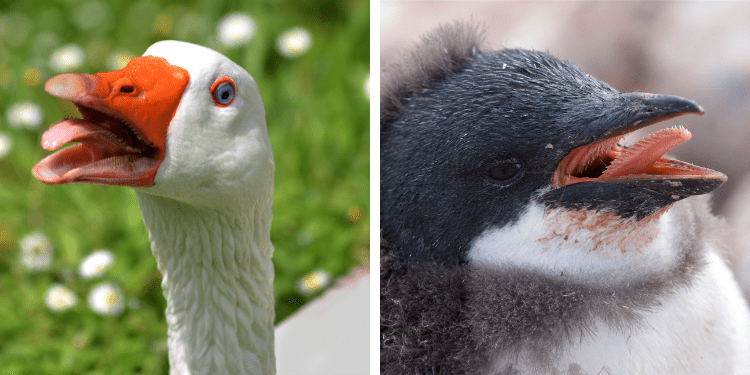 Fish can be pretty slippery and because penguins eat fish, their tongues have been specially adapted to handle this. They are covered with tiny spines or barb-like structures. These are called papillae and the spines are backward facing.

In fact, at a quick glance, these spines look like tiny teeth. They’re made from keratin and are quite sharp but flexible.

Like penguins, ducks have spines on their tongues but not as profound. Ducks tend to forage for food in mud and shallow water. In order to filter out the mud and water, they use their tongue like a pump.

Many nectar eating birds such as parrots and lorikeets have small protrusions on the tips of their tongues. This makes the tongue look like it’s frayed or has a brush on the end. What this does is increase the surface area of the tongue to allow the bird to collect more nectar.

7. The Tongues Of Flightless Birds

Flightless birds like emus, ostriches and kiwis have quite insignificant tongues. They are usually small and triangular and don’t even reach the tip of their beaks. And, they don’t seem to serve any particular purposes as far as feeding and catching food is concerned. 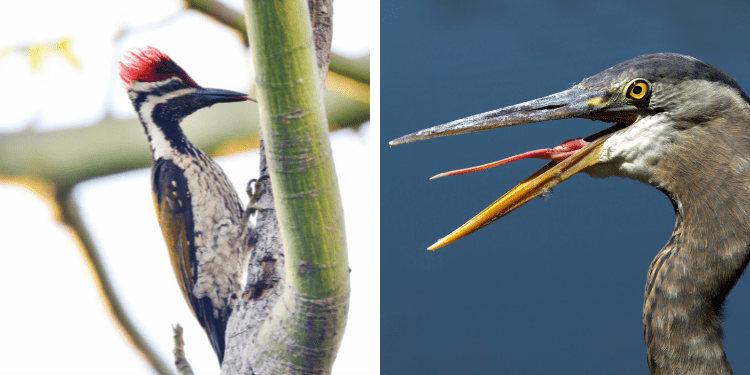 Different Types Of Tongues That Birds Have

As you can see from the information above, not all birds have the same type of tongue. Different species have different tongues that help them in various ways. Here’s a quick explanation of the different types of tongues found in birds.

A muscular tongue is useful for holding onto nuts and seeds and to help birds such as parrots to mimic different sounds.

A grooved tongue has a groove down the center. These are normally found in birds such as vultures because it allow them to suck marrow out of bones.

Piston tongues are generally found in pigeons and flamingos. This type of tongue allows the birds to push water into their mouths without having to tilt their heads back.

Sticky tongues are found in woodpeckers. These birds have a sticky substance on the end of their tongue to help them catch insects that are found in the crevices of trees.

As you can imagine, nectar eating birds have different tongues to others. Their tongues are often long and tubular. This allows them to suck up the nectar they find in flowers and bird feeders.

Interesting Fact
A lot of birds use their tongues to help regulate their temperature. Like other animals, they don’t have sweat glands like humans do. Therefore, if you see a bird with its mouth open, it means that the bird is using its tongue to absorb the cool air and cool down its body temperature. 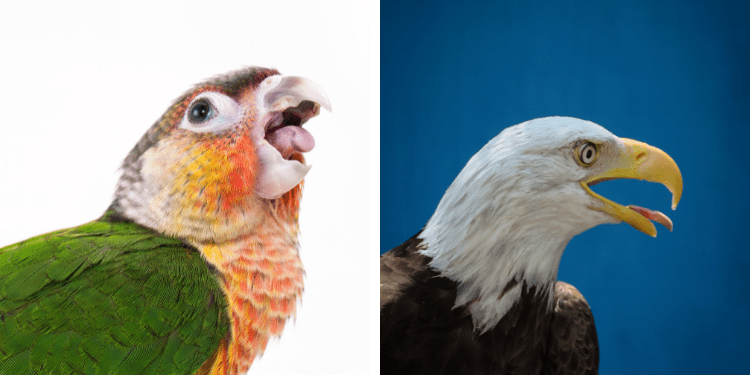 Do Birds Have Taste Buds On Their Tongues?

Birds do have taste buds but not nearly as many as we humans do. In fact, it has been discovered that parrots have around 300 to 400, pigeons have around 27 to 59 and chickens only have 24 taste buds. Compare that to humans who have over 10,000 taste buds and these are mostly found on our tongues.

Birds have their taste buds on the floor or roof of their mouths or at the very base of the tongue. Research has discovered that birds can taste both sweet and savory things including salt, sugar, brine and lipids.

What animals don’t have tongues?

There are not many animals that don’t have tongues. But the few that don’t include crustaceans, insects and sea stars.

You may have witnessed birds touching beaks. While this is not actually kissing, it is a sign of affection and can often be seen during courtship.

Are birds able to lick their beaks with their tongues?

You’ll find that most birds don’t lick their beaks with their tongues. Instead, they will clean their beaks by rubbing them against rough surfaces such as tree branches.

Now you know for a fact, that all birds have tongues. Their size and shape is as varied as the bird species themselves. Most birds use their tongues to help them when feeding.

Bird tongues are also quite complex and some even have a hardened tip made from keratin. Other birds have backward-facing barbs on their tongues to help to push food down while birds like woodpeckers have a sticky substance on their tongues to collect insects with.

Although bird tongues do have taste buds, they don’t have nearly as many as human tongues do. However, birds are able to taste both sweet and salty foods.