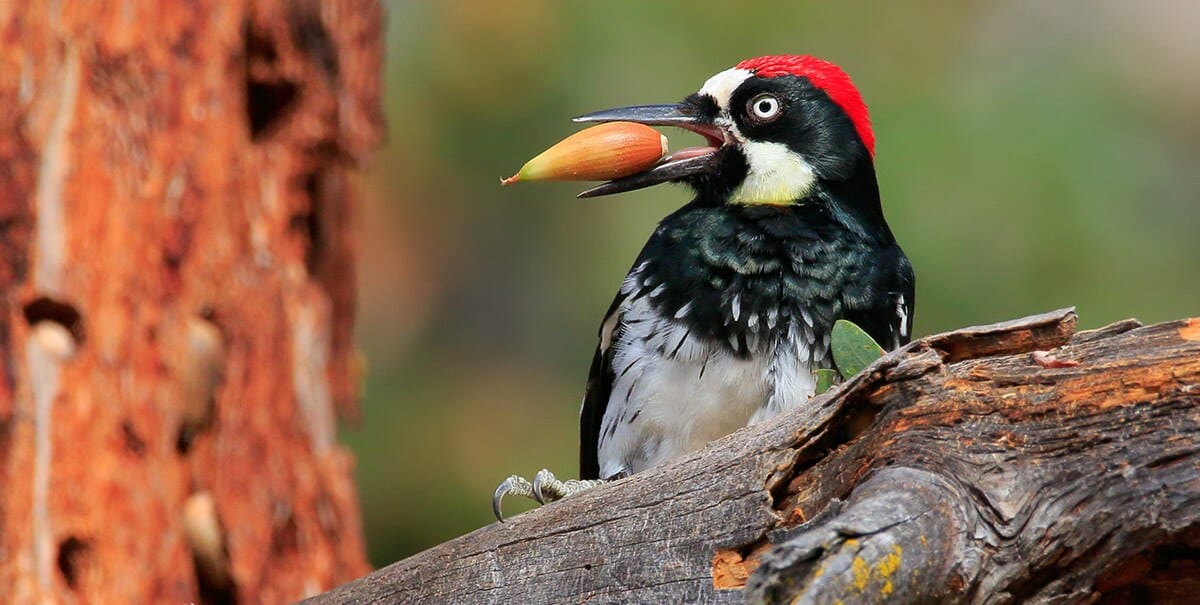 If you’ve ever seen a woodpecker then you’ll know that they have a very appropriate name. They seem to be constantly pecking on wood, and they don’t really care what the wood is or where it is. There is usually a reason for it and once they start, you can’t stop them.

Woodpeckers are fascinating birds and fun to watch, so we’ve put together this guide of everything you need to know about woodpeckers.

Where do they live?

Woodpeckers are found all over the World, with the exception of Australia, New Zealand and Madagascar. There are over 300 different species around the World, but in the US there are just 22. This guide will include a few of the more common species which you are likely to see around the country.

The average lifespan of a woodpecker is 5 to 11 years, depending on the species. The oldest recorded woodpecker was a Pileated Woodpecker who was 12 years and 11 months old when it died.

How big are they?

The size of the woodpecker will vary, depending on the species.

The plumage of a woodpecker is different for each species, but they do have some common features, such as a strong, stiff tale and zygodactic feet. We’ve picked out some of the most common woodpeckers in North America to help you identify them. 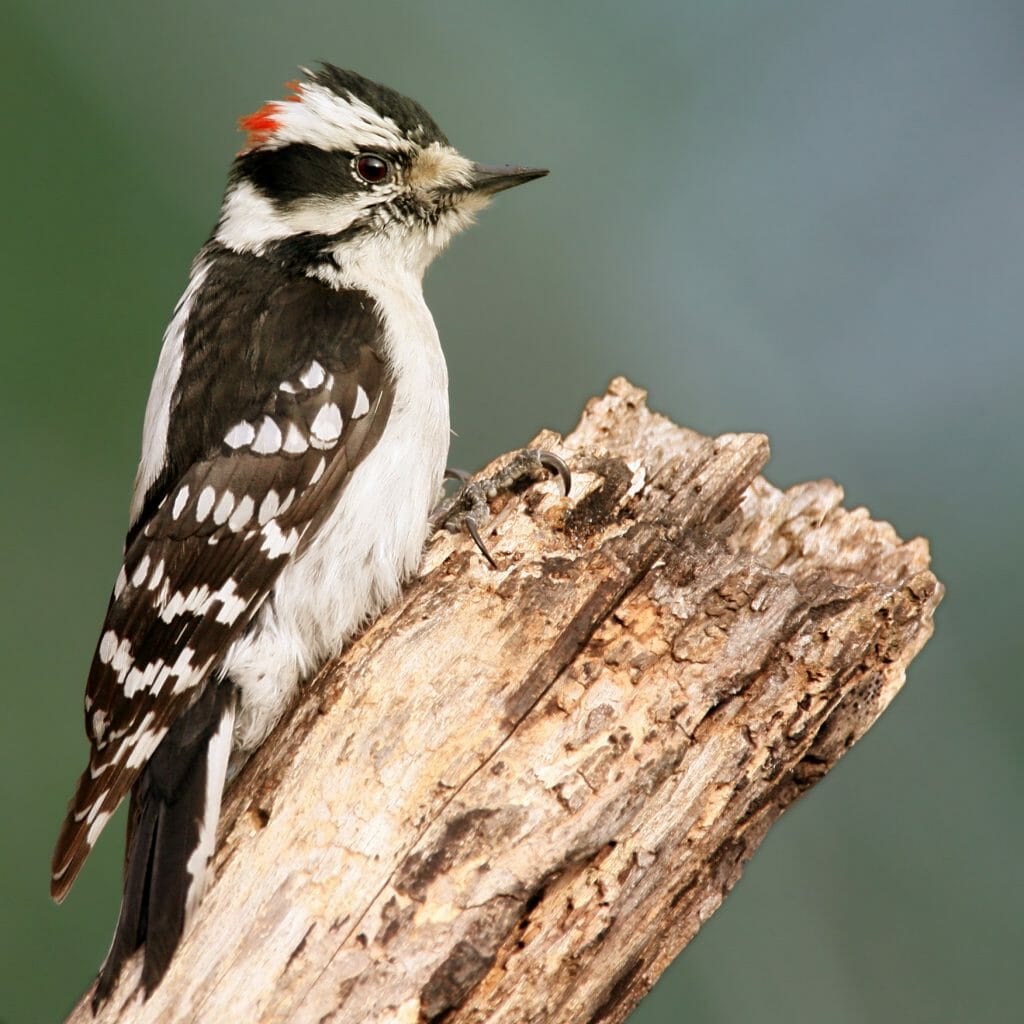 Downy and Hairy Woodpeckers look remarkably similar and they are easy to get confused. 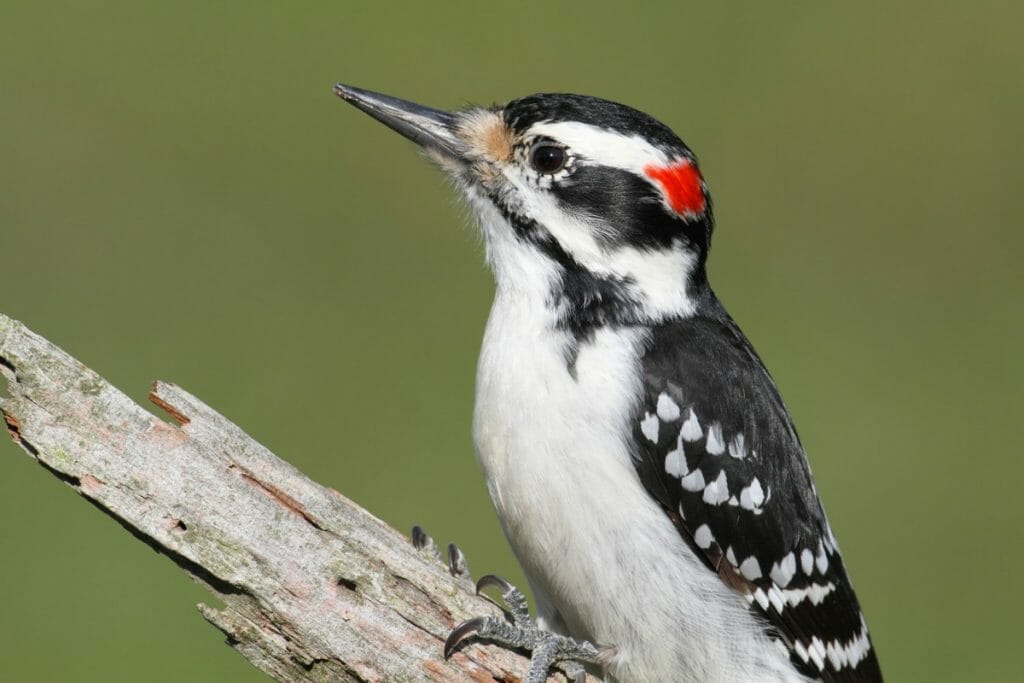 Interesting Fact
Learn the difference between a downy and hairy woodpecker here. 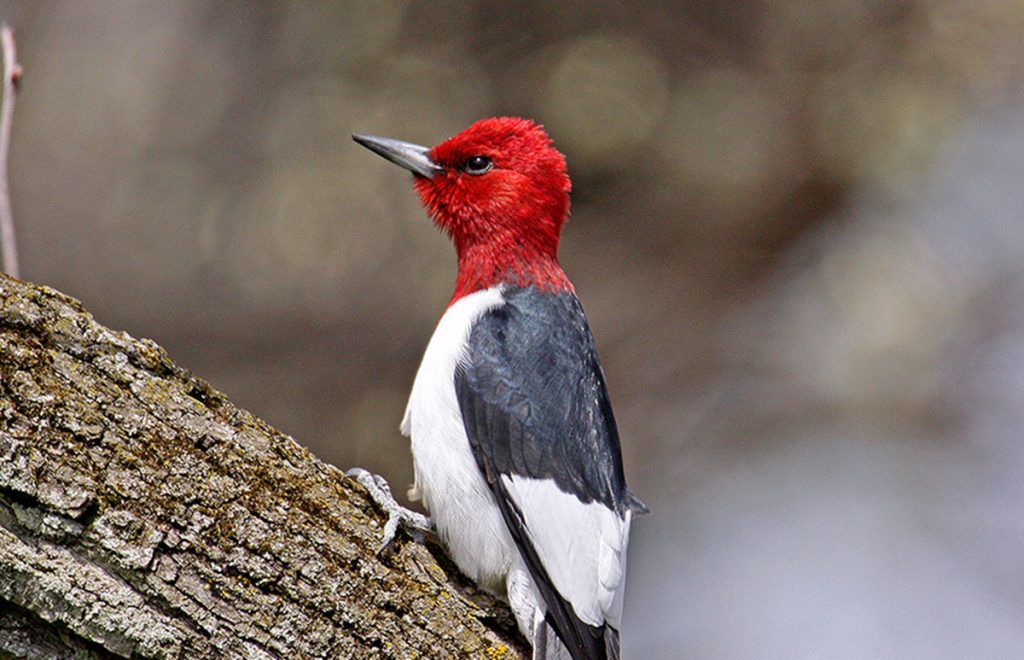 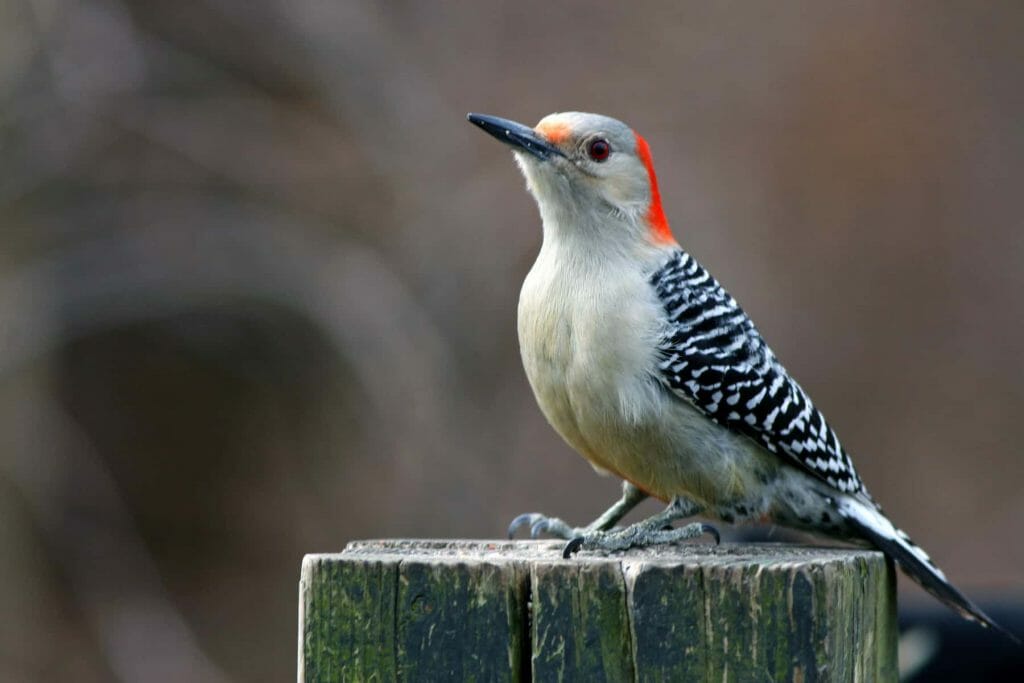 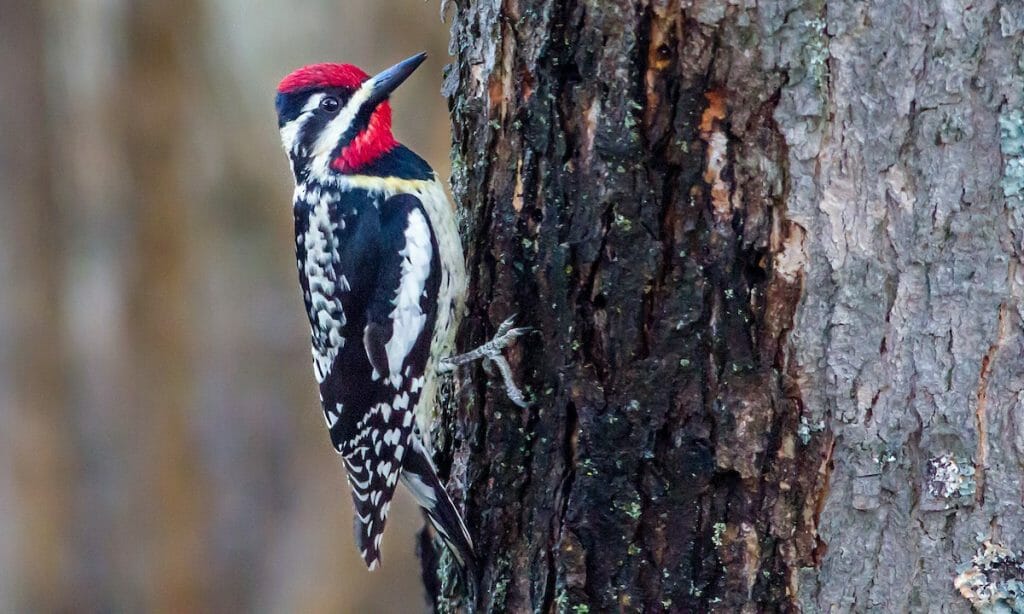 Male: The male Yellow Bellied Sapsucker has a black and white face, with a red head and throat. His sides, back and abdomen have a slight yellowish color and he has a white rump. His black wings have white spots on them.

Female: The female bird is similar to the male.

As their name suggests, woodpeckers like woodlands and forests. They prefer oaks and pines, though some species have been known to make their homes in areas where there are few trees. They generally prefer mature trees and can be found making their nests in dead trees. They also live in urban areas with woods and parklands.

They can be found through North America and Canada.

Woodpeckers have certain characteristics which make it possible for them to drill in to wood and forage among the bark for insects.

You need a strong bill to chisel out wood like a woodpecker. Their bills are designed for pecking holes in wood and they have 3 layers to protect them. The upper beak is longer than the lower beak and is kept razor sharp by the constant drilling.

Woodpeckers use their tongue to pick up insects from holes they have drilled in wood. Their tongues are long and thin, to help them get in to any holes, and when they’re not using them they wind around the skull. The surface of the tongue is sticky to help them collect insects.

Woodpeckers have zygodactal feet, which means that while most birds have 3 toes pointing forwards and one toe pointing backwards, woodpeckers have 2 toes pointing forwards and 2 toes pointing backwards. Their toes have sharp claws and this is what helps them to cling to the side of trees while they peck. They can grip so well that they can even walk up the side of a tree. These toes make it easier for them to forage among the trees to find insects and give them a firm grip to keep them in place when they peck.

To help them balance, they also have very strong, stiff tail feathers which they use to support their weight.

Woodpeckers have also developed ways of protecting their brain from their constant pecking on wood. The force of this would cause serious damage to most of us, but woodpeckers have their own defenses.

They have even developed their own techniques for helping to protect the brain. As they peck they gently move the angle so that the pressure is spread over the skull and brain and not always in the same place. 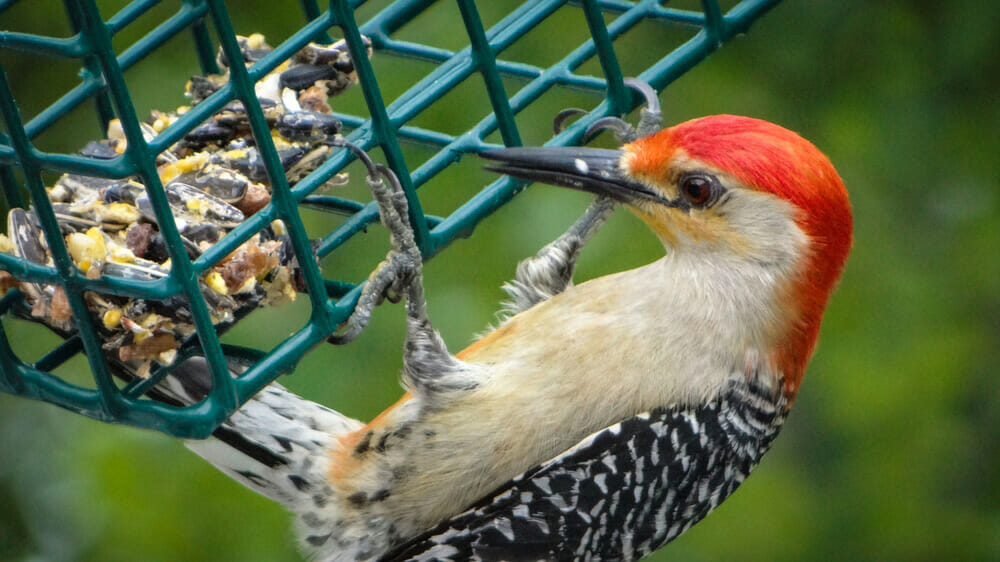 Woodpeckers are omnivorous, so they eat a variety of foods. Some species will prefer some foods to others, but they mostly have the same, varied diet.

Woodpeckers can hear insects as they move around under the bark of the tree, so they will peck a hole until they can get to them. Some species, such as the Red Headed Woodpecker can even catch insects in flight.

Woodpeckers love suet and the animal fat makes it easy for them to digest. They will eat suet on its own or mixed in with other foods.

Nuts are another popular food with woodpeckers, particularly peanuts. They can use their sharp bills to remove the shells so they can eat nuts off any trees.

Most woodpeckers eat seeds, and black sunflower seeds are a favourite.

Just like other birds, they have a sweet tooth, so they will eat the fruit from fruit bushes such as blueberries cherries and strawberries. If you have a woodpecker feeder out with grape jelly, they will even try to get to that.

Not all woodpeckers eat tree sap, and the Yellow Bellied Sapsucker is one species which does. They drill holes in the tree to find the sap, then drill another hole to encourage the sap to flow. Once it does, they don’t suck it as their name suggests, but lick the sap up.

Woodpeckers like mature oak trees and the Acorn Woodpeckers love acorns. They store acorns by drilling acorn sized holes in wood and placing one acorn in each hole. They don’t restrict themselves to trees and will store their acorns in fence posts and utility poles too, often creating a granary tree. They manage to pack the acorn in so tightly that squirrels cannot get them out.

Certain species of woodpecker will eat eggs out of other birds’ nests, and sometimes they will eat the chicks too.

What’s All The Pecking About?

To the untrained eye, a woodpecker is just pecking to be a nuisance but that isn’t the case. Woodpeckers have several reasons for pecking and if you watch closely you will be able to see what they’re doing. 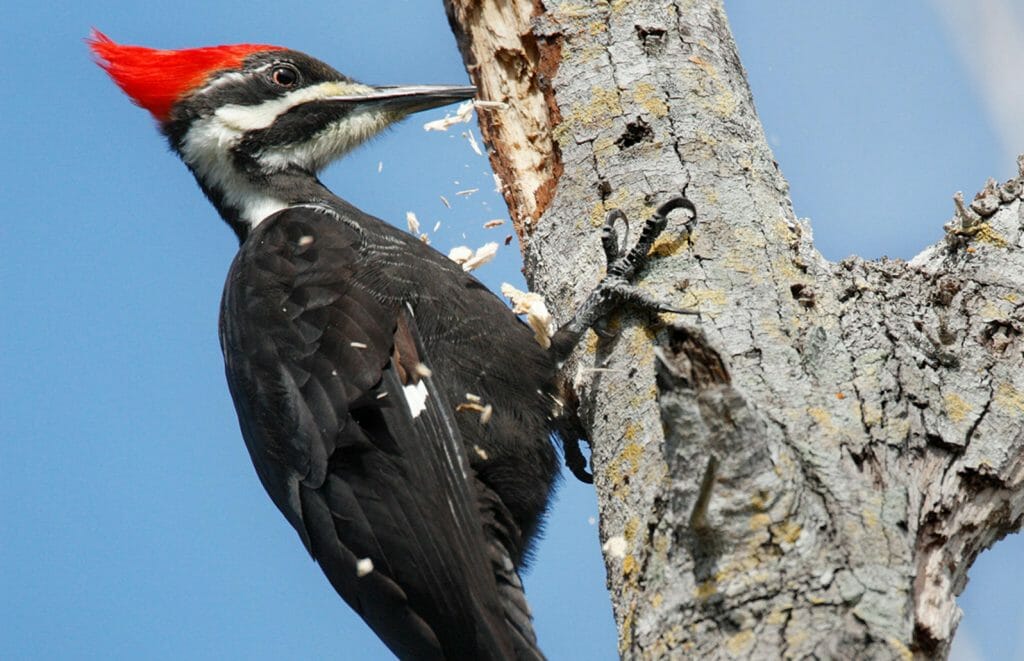 Woodpeckers are mainly monogamous and once they find a mate they will stay together for life. They both work together to create the nest and this can take up to 28 days to complete. When they have a suitable hole in a tree they will add wood shavings from the ones they have carved out. They do not re-use their nests but other birds and mammals will use the holes when they have been abandoned.

These are the average nesting times for woodpeckers, and more specific information on the common species can be found below.

The Acorn Woodpecker is one species which is not monogamous, and are polygynandrous. They will have several partners during the mating season and will share nests. The young can be raised by up to 12 parents. The nest is usually between 5 feet from the ground and 60 feet, and is excavated by a group of birds.

Hairy Woodpeckers will build their nest from 5 feet off the ground to 30 feet. They lay between 3 to 6 eggs, and the chicks are ready to leave the nest in 28 days.

Pileated Woodpeckers excavate their nests from 15 feet high up to 85 feet from the ground. They lay between 3 and 8 eggs and the young are ready to leave the nest in 26-28 days.

Red Headed Woodpeckers can make their nests at ground level, or up to 80 feet off the ground. They lay 4-8 eggs, but with only one egg being laid per day. The young are ready to leave the nest after 27 days.

Yellow Bellied Sapsuckers build their nests between 10 and 45 feet off the ground. They lay between 5-6 eggs and the young are ready to leave the nest in 25-29 days.

Woodpeckers can be quite shy and timid birds and prefer to be away from the busy lives of other birds.

They do live side by side with other birds and have been known to take the nectar from hummingbird feeders, but they won’t actively seek out their company. The Acorn Woodpecker, however, prefer to live together in colonies.

Woodpeckers will defend their territory from other birds who are trying to get their food or in to their nest. They show their aggression by pointing and jabbing their bill, flicking their bills and drumming.

Woodpeckers are not facing extinction, but they are facing more and more of a threat from urbanization. As woodlands and forest disappear to make way for towns and cities, the birds are losing more of their natural habitats.

The use of insecticides is also reducing the food available to them as they rely on insects to survive.

These delightful birds can be seen almost anywhere, even when you are on vacation. If you are lucky enough have these in your garden, you may even see them raise their chicks and watch the family grow every year.