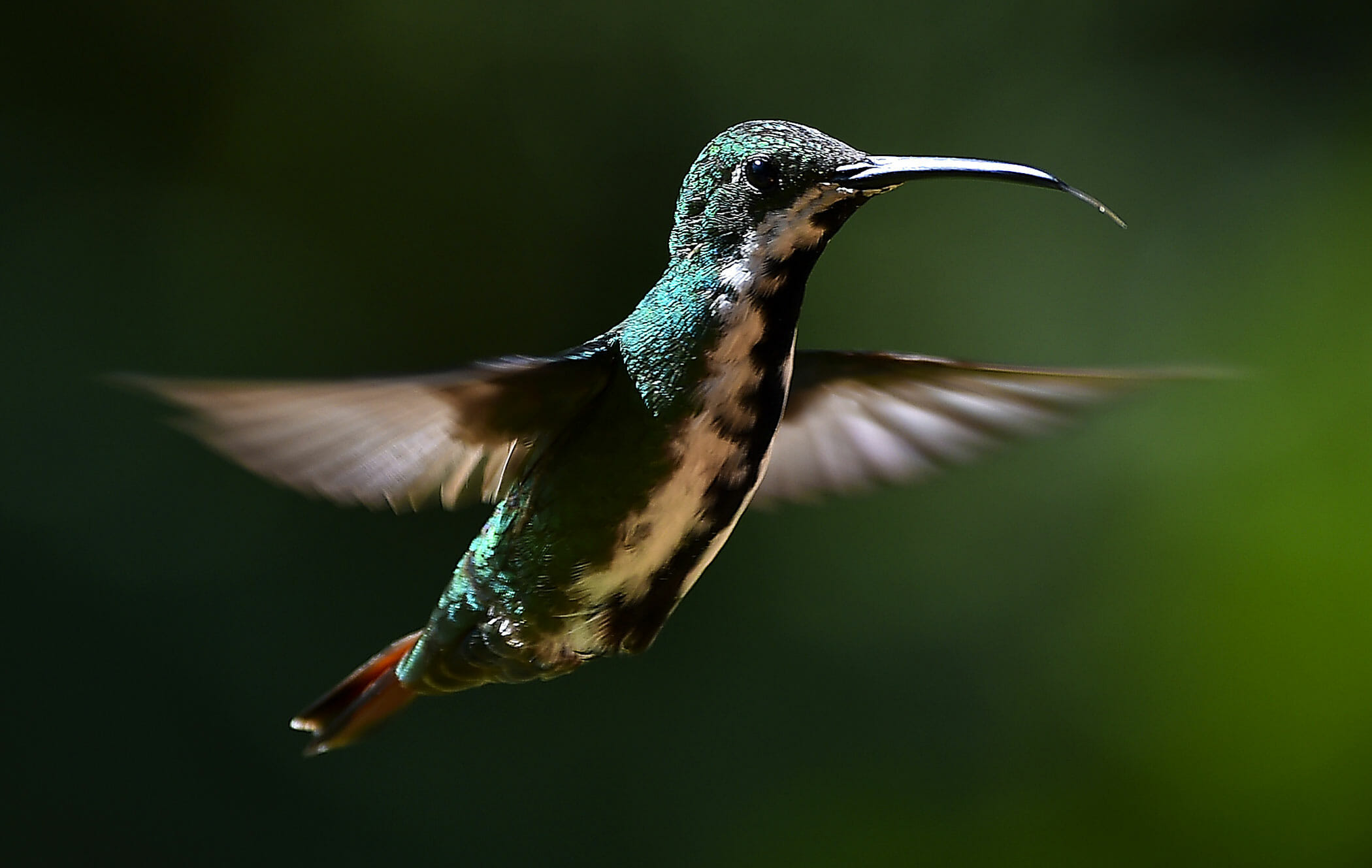 One of the most striking birds, a hummingbird brings a smile to the faces of all enthusiasts lucky enough to catch a glimpse of this minuscule bird.

Yet, though one of the most sought-after birds that many homeowners go out of their way to attract to their yard, little thought is given to the amazing anatomy of the powerful hummingbird.

A fascinating aspect of any hummingbird is, in fact, their beak! So, if you’ve ever wondered about the shape, and overall usefulness of a hummingbird’s beak, here we consider this most crucial of features further.

Why Do Hummingbirds Have Their Beak Closed When Feeding?

Though at first glance, it may seem as though hummingbirds sip away at their food, they are, in fact, sticking their tongue into the nectar and drawing it up. This means their beaks are closed when feeding so they can complete this task successfully!

Hummingbirds do not use their beak as such to feed, rather employing the two troughs, which are grooves at the tip of their tongue.

Better still, a hummingbird can lengthen and then pull back its tongue, depending on beak and tongue length. This is usually done anything from three to as much as thirteen times and all in the space of one second – all without opening its beak!

See it in action in slow motion below!

Can a Hummingbird Open Its Beak?

A most commonly asked question regarding the beak of a hummingbird is whether it can be opened or not? Though this may initially sound strange, when you see hummingbirds from afar, their long needle-like beak never actually looks as though it opens up; neither does it look capable of doing so. This is especially noticeable if you’ve been able to closely watch a hummingbird feeding at your nearby bird stations, as you won’t be able to see any beak movement as they draw from the nectar.

Yet, when a hummingbird works at catching insects in flight, their beak will indeed open. It does this via the jaw flexing downwards, meaning the beak automatically gapes open slightly for such execution.

How Do Hummingbirds Use Their Beaks?

When considering the intricate detail of a hummingbird’s beak in further detail, it soon becomes clear that this bird has an almost perfect natural design. This allows hummingbirds to use their beak to the fullest to reach the nectar from far back of those flowers they feed on.

As well as this longer design, the actual tongue of a hummingbird is covered in hair. This also works well in drawing as much nectar as possible each time they feed.

Therefore, when hummingbirds do use their beaks, they will stick their tongue into the flower and draw up the nectar through their two troughs. This isn’t as you would expect a sucking motion, rather a method of pulling the nectar in.

Experts refer to this method as capillary action. The bird will then retract its tongue and draw the nectar back up into its mouth as the nectar slides down their throat. The capillary action process is then repeated until they are full!

DON’T MISS: Learn all about the different types of bird beaks!

Can a Hummingbird Break Its Beak?

Another aspect many people are curious about concerning a hummingbird relates to their stunning looking beak structure. Because these look so very delicate in their makeup, some people feel as though a hummingbird’s beak is easily breakable.

Though this bird’s beak is soft and shaped like most other bird beaks, the difference here is its length. This is especially noticeable when you compare the longer beak type of the hummingbird in proportion to the hummingbird’s overall body size.

As adaptable and flexible as a hummingbird’s beak may seem, unfortunately, they can damage or rather break them.

The most common causes of damage here include flying into windows, as well as attempting to access those feeders that have too narrow holes. Such ill-designed feeders mean a hummingbird can often get caught when another hummingbird tries to attack them. They, therefore, damage their beak in the process by trying to get out of the feeder too quickly.

What Happens If a Hummingbird Has a Hooked Beak?

The bottom of a hummingbird’s beak is slightly flexible, meaning this bird’s lower beak can actually bend. This is considered to be possible to at least 25 degrees! This means it allows for the hummingbird to access those harder to reach places for food without breaking their beak.

But, you may well find that the odd hummingbird you come across has what resembles a hooked beak. An unusually shaped beak that resembles that of a hook often suggests that the hummingbird has damaged their beak somewhere along the line. However, there is little a human can do to help here. Most hummingbirds will, however, adapt to a hooked beak and continue to feed at stations and flowers as usual.

What Is the Beak of a Hummingbird Called?

Though most avid bird watchers will regularly refer to a hummingbird’s beak like a straw or perhaps a needle, experts tend to prefer the term bill instead!

This is also the term used when discussing other bird beaks, big and small.

You may even hear the term maxilla mentioned. This is considered the official name used to describe the top part of the hummingbird’s beak.