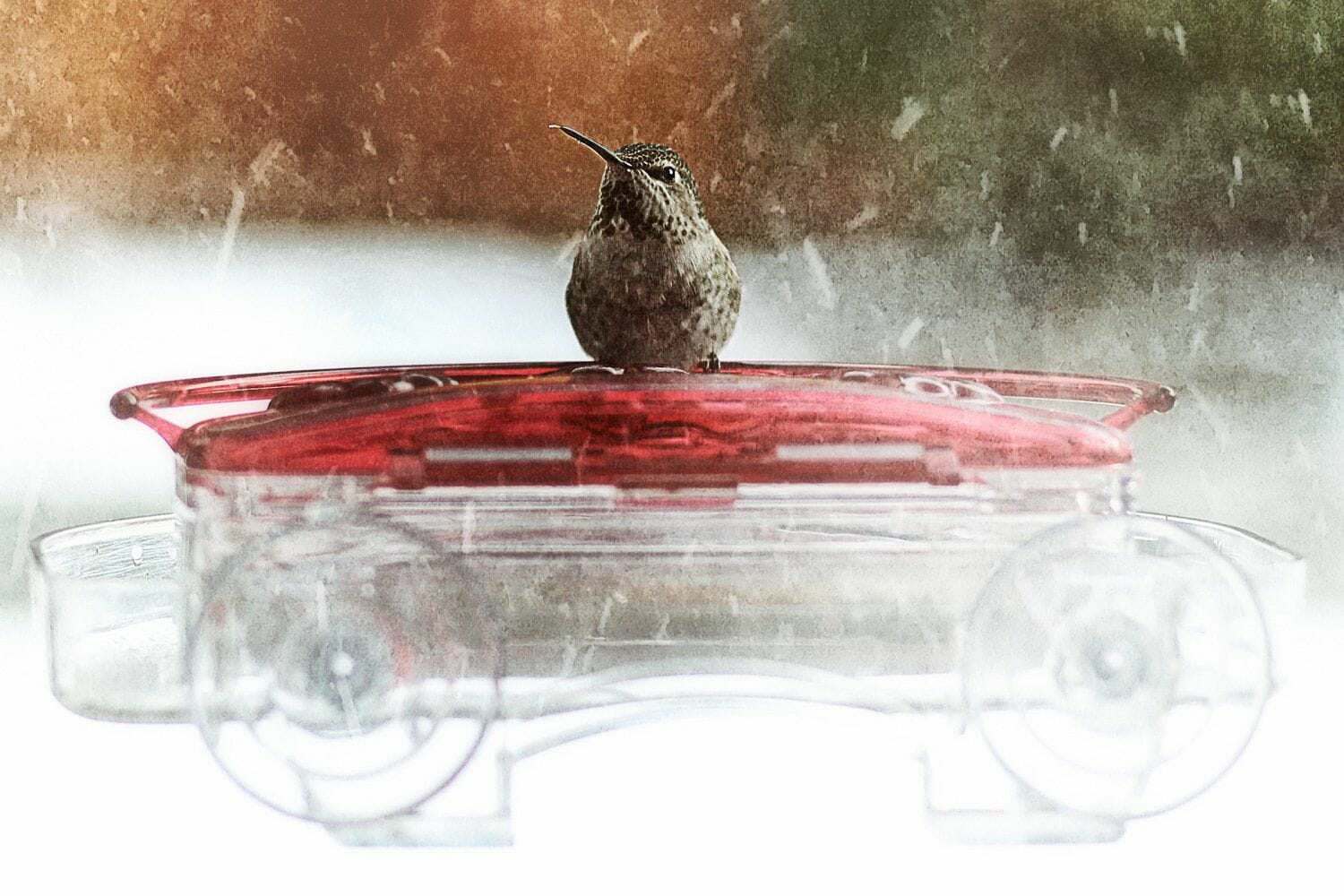 Hummingbirds are the smallest birds on the planet and pretty amazing. Their size means they should struggle in colder winter weather, but they have their own way of coping with it.

While the hummingbird prefers warmer climates, there have been many sightings in North America which proves and cold weather is no threat to them. The hummingbird species has the ability to go in to a state of mini hibernation, called torpor. The heart rate and metabolic rate of a bird in torpor mode drop significantly, enabling the hummingbird to survive extended periods of time without much food. This helps them survive in cold temperatures.

Hummingbirds That Can Be Seen in the Winter

From late October to the middle of March, North America will probably be home for a lot of wintering hummers. The breeding range of hummingbirds covers most of the US and parts of Canada, from the West Coast to the east, so most states will be about to see them.

The Ruby-throated hummingbird is the most common type of hummers, and they spend the summer in the eastern United States. In the winter, they migrate to southern Florida in small numbers. You can also see some of these birds further north when the climate is mild.

Anna’s hummingbird is a western hummingbird that’s often sighted in the Pacific Coast. These hummers can also be found throughout the year in northwestern Mexico and southwestern Arizona.

Broad-billed hummingbirds are often found in the southwestern United States in the summer and their migration takes them to the far north in central and southern Arizona in the winter months.

Rufous hummingbirds are another western species that you’d find wintering in central and southern Mexico. during the winter they have been spotted along the Gulf Coast and in the southeastern regions of the United States as well.

Costa’s hummingbird is yet another beautiful western hummer that can be found all year round in the southwestern regions of the United States. These birds have a pretty wide range, including Arizona, California, western Mexico, and Baja.

How Do Hummingbirds Cope with the Winter?

While hummingbirds migrate to avoid colder weather, there are times they can’t avoid it.

Some migratory hummingbirds arrive late in the breeding season, and this can lead to them being left in a colder climate than they are used to.

Some juvenile hummingbirds can be trapped in northern breeding grounds as they do not know when they need to migrate south for winter.

The size of the bird also means that during the hummingbirds migration, they can be blown off course if there is a storm. Storms can be a big problem for upsetting hummingbird migration patterns.

In addition to going into torpor, there are other ways that a hummingbird can use to stay warm in the winter. Further, overwintering hummingbirds tend to look for areas where the winter climate is relatively milder than where they’re at currently so that the risk of not surviving is reduced.

How to Help Wintering Hummingbirds?

So what can we do to help increase the survival chances of a hummingbird in the winter months? There a few things you can do.

Food sources may not be so easy to find so leave your hummingbird feeders out during the winter. Sugar water is a good energy source. Finding alternative food supplies could use up vital energy for a hummingbird. For the best sugar water, here’s the recipe.

One thing you need to keep in mind is that nectar can get frozen during cold winter nights, so it’s advised to take the hummingbird feeders down and leave them inside the house until the next morning. Most birds tend to be asleep at night anyway.

Another thing you can do to help these tiny creatures out is to provide them with a shelter that can protect them from rain and storms.

Here’s a detailed YouTube tutorial that demonstrates how to build a bird sanctuary in your backyard. A sheltered porch would be an ideal start.

There are plenty of natural ways for you to create a bird shelter, planting some trees and a few shrubs being the most advised option to go with. Tall grass and tree cavities also make for great natural bird shelter.

When it comes to choosing the type of plants, it’s advised to go for native plants since the birds will be more familiar with them. moreover, native plants will easily thrive with minimal care on your part, so that you won’t have to take care of both plants and birds, at least not to a tiring extent.

As far as artificial shelters, you can go with birdhouses to provide the safety that birds require in such extreme weather conditions. The great thing about birdhouses is that they come in various shapes and sizes, so you’ll easily find ones that can accommodate tiny hummers.

Roost boxes are also great to implement in your backyard. A roost box can provide all needed protection for a small flock of wintering hummingbirds. If you’re lucky, you can find birdhouses that can be converted to roost boxes.

You can combine all of these ideas to create shelter at various heights. Implementing layers of plants and trees, along with placing birdhouses or roost boxes here and there, will help provide winter accommodation for all birds and not just hummingbirds.

The last thing you want to happen is for your shelters to be damaged by predators, so you may want to place them in safe areas that are out of the climber’s reach. If necessary, use baffles to protect your shelters from climbers.

To attract more hummingbirds during the early spring and late fall, what you can do is use some red accents around your backyard and garden. You can use anything from child toys to reddish pieces of cloth. This helps garner the attention of hummers so that they can discover the nectar feeders.

The vast majority of hummingbirds tend to migrate south to spend the winter in southern Mexico, Southern or Central America and begin to migrate north to where their breeding takes place in the southern United States.

Here’s a map of hummingbird spring migration activities and sightings in the United States and Canada from 2014 to 2019. Please note that we didn’t partake in the creation of this map.