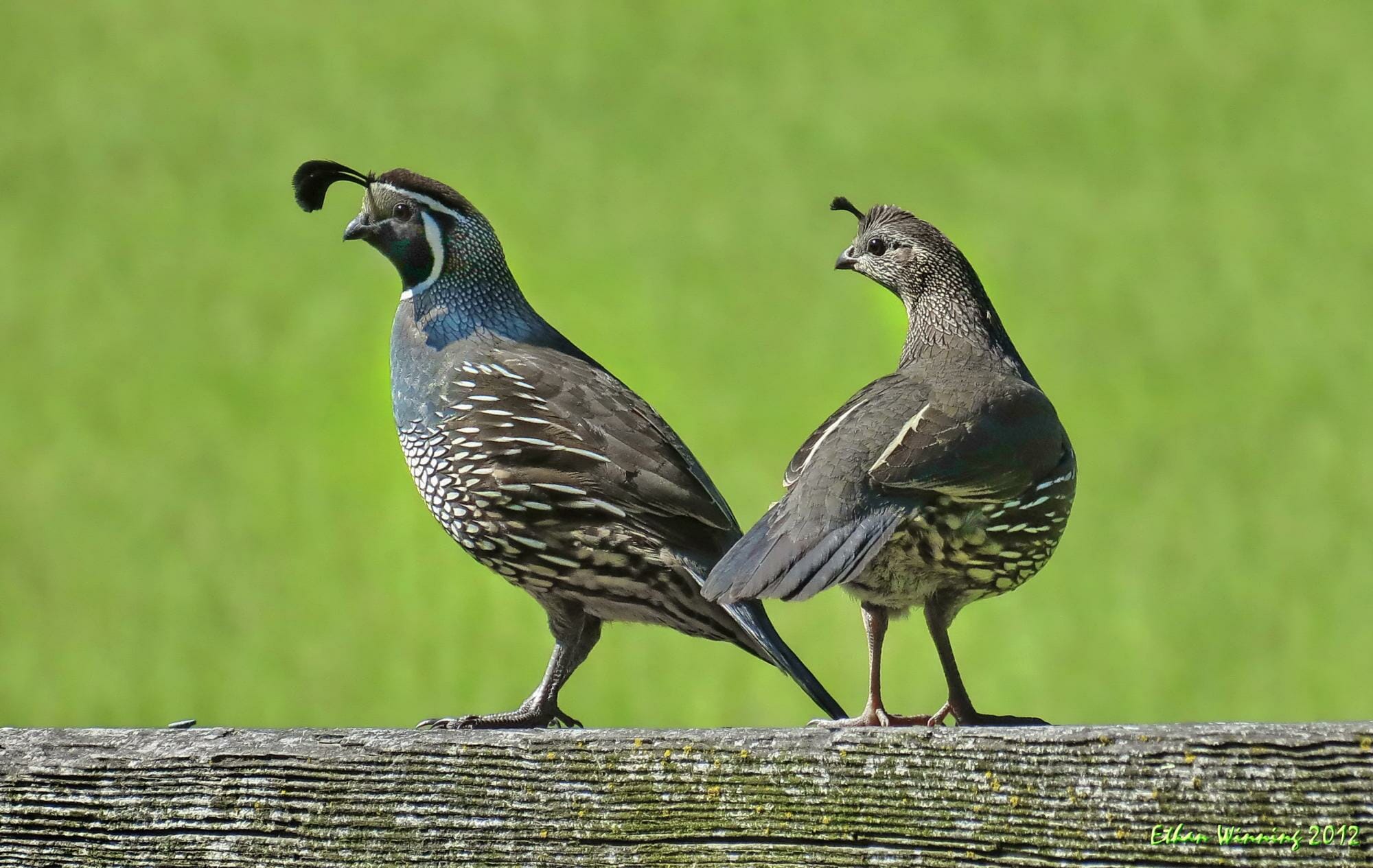 California has many state animals, but California quail (or California valley quail, or valley quail – it has a lot of names, I know) is the only avian symbol of the Golden State. And before you ask: no, the bird is not golden, it’s just the country. But it is, however, very beautiful, and pretty stylish in its own way.

Let’s see just what we can learn about it.

It must also be mentioned that, due to their amazing adaptability, California quails were successfully introduced into the areas of Washington, Utah, Canada, even New Zealand, Australia, and Chile!

One of the defining features of the California quail is its crest. The crest will remind some of you of the plumes of the medieval knights, while some of you may see the similarity between it and an iconic haircut of the King of Rock’n’Roll. All jokes on the side, the plume consists out of six feathers which bend forward, forming a U-shape.

California quails have a mask-like patter all over their face. Males have a black “mask” with white stripes, while females have brown. I don’t know about you, but that similarity with knights is growing more and more prominent looks-wise, in my opinion at least.

Their necks are short, and their long tail is long and square-shaped, and the color of the feathers on their round bellies goes from grayish, white, and rust-colored. The aboriginal peoples loved their feathers so much, they hunted them in order to use their feathers for decoration.

These plump little birds have a rather unusual call. If you’re enjoying a casual stroll within a forest or near a river, there are good chances you’ll hear a sound like “chi-ca-go, chi-ca-go”. Or it may not be exactly like this. Making bird calls is not always my strong suit, so those of you interested in hearing the California quail call, you may do so here.

California quails prefer making their habitats wherever there is a lot of brush. Grasslands, foothills, canyons at some desert’s edge – these are the preferred locations for the quails’ habitat since these locations offer plenty of room for them to hide their eggs, and blend in with the environment to hide from the predators.

They do not build nests on trees, but in the holes in the ground and under the shrub. They themselves burrow these holes using their bellies and feathers and line them with grass to mask them so the predators cannot easily find them.

Their eggs are white, and usually, a female quail can hatch approximately 12-16 eggs. However, their nests may contain even more – 28 eggs were once found in a single nest!

Since they can often be found in rather arid areas, they are able to satisfy their need for water by eating insects and plants and thus withstand long periods of time without water. However – if the dry season and the heat last longer than usual, the quails will need to start searching for drinking water, or they will die otherwise.

The number of hatched chicks in a brood tends to be large. It is assumed that part of the reason for that may be the quails’ habit of putting their eggs into the nests of other birds, to ensure the survival of the young. Such a practice is called “egg-dumping”.

The great thing about the California quail is the fact that both male and female of the species take care of the young. And not only that: it happens often that several families combine into a gigantic joint or communal brood! Such a large family consists of at least two females and several males who are there to protect the females and the young. Just imagine – a California quail daycare!

Regarding their diet, California quails mostly feed on leaves, seeds, buds, and berries, and sometimes smaller insects. The most notable source of food for them is the Toyon berries – they just love them! Plant-based food is often hard to digest, but California quails’ intestines are rich with special protozoans which enhances their digestion.

However, chicks don’t have such a large number of protozoans, so they need to acquire them in a not so nice a way: by pecking through the adult quails’ feces!

The Social Life of California Quails

California quails can be seen as rather social birds. In the mating season, they tend to separate in couples, but otherwise, they would make a large flock, called a covey, which usually consists out of 20 to 40 quails,but there are records of coveys with hundreds of quails!

When gathered like this, once a day they partake in a rather interesting little communal activity called “the dust bath”.

Essentially, a group of quails would find a nice, clear soft patch of land. Then they will use their round little bellies to burrow into the soil and start flapping their wings in order to raise a cloud of dust. And if the chosen patch of land is at a very sunny place, all the better.

Earlier in the text, we’ve mentioned their funny little bird call. That is actually how the females sound in the mating season. This chi-ca-go call of theirs is often interrupted by another male’s “squill” sound in an antiphonal tone. Thus, the male and the female perform a sort of a duet. How romantic!

California quails are year-long birds, which means that they do not migrate, but stay in their native habitat. Since they can be relatively easily found in nature and are often seen by the roads, they are very popular prey for sports hunters, though the laws regulating quail hunt are indeed very rigid. Still, this is not something I particularly approve of. Please, don’t hunt these wonderful creatures!

However, in order to hunt it, you’ll need to catch it first! When frightened, the quail, who usually prefers to move on foot, bursts into short yet sudden and explosive flight. Such a flight is called flushing, and they can reach 38-58 mph in-flight. Yet if there is any chance for it, they’ll rather try and run away rather than fly away, their running speed reaching 12 mph. Either way, take that hunters and predators!

The State Bird and a Celebrity

In 1932, a non-profit organization called the Audobon Society proposed that California quail is to be adopted as one of the state symbols of California. This proposition was brought through the Assembly Bill 776. Assembly members Eleanore Miller and Charles W. Fisher were the ones who brought the proposal the California Legislature.

On August 14, 1932, California quail has officially become the national bird of California.

And as if by some unwritten rule, many people are drawn by the glamorous lights of Hollywood, and somehow the very same thing happened to the California quail!

We can see this beautiful bird play a role in the world-famous classic animated feature Bambi. You don’t believe me? Then look at this momma bird and her little ones here. They can also be found Disney’s Melody Time – a pretty little quail family.

California quail may be a small and somewhat timid creature, but it is fascinating in its own ways. Despite her size, it is not to be underestimated. California quail is fast when it needs to be, it blends with the environment easily, and loves dust baths (granted, that does not give her any particular advantage, I just think it’s adorable)!

But it is its adaptability that brought her the title of the state bird of California, its determination, cunning, and durability. Those qualities are worthy of admiration, and they make California quails the ideal symbols of the Golden State.

Hopefully, this article widened your horizons about the California state bird and California quail– one of the most interesting birds in the wilderness.