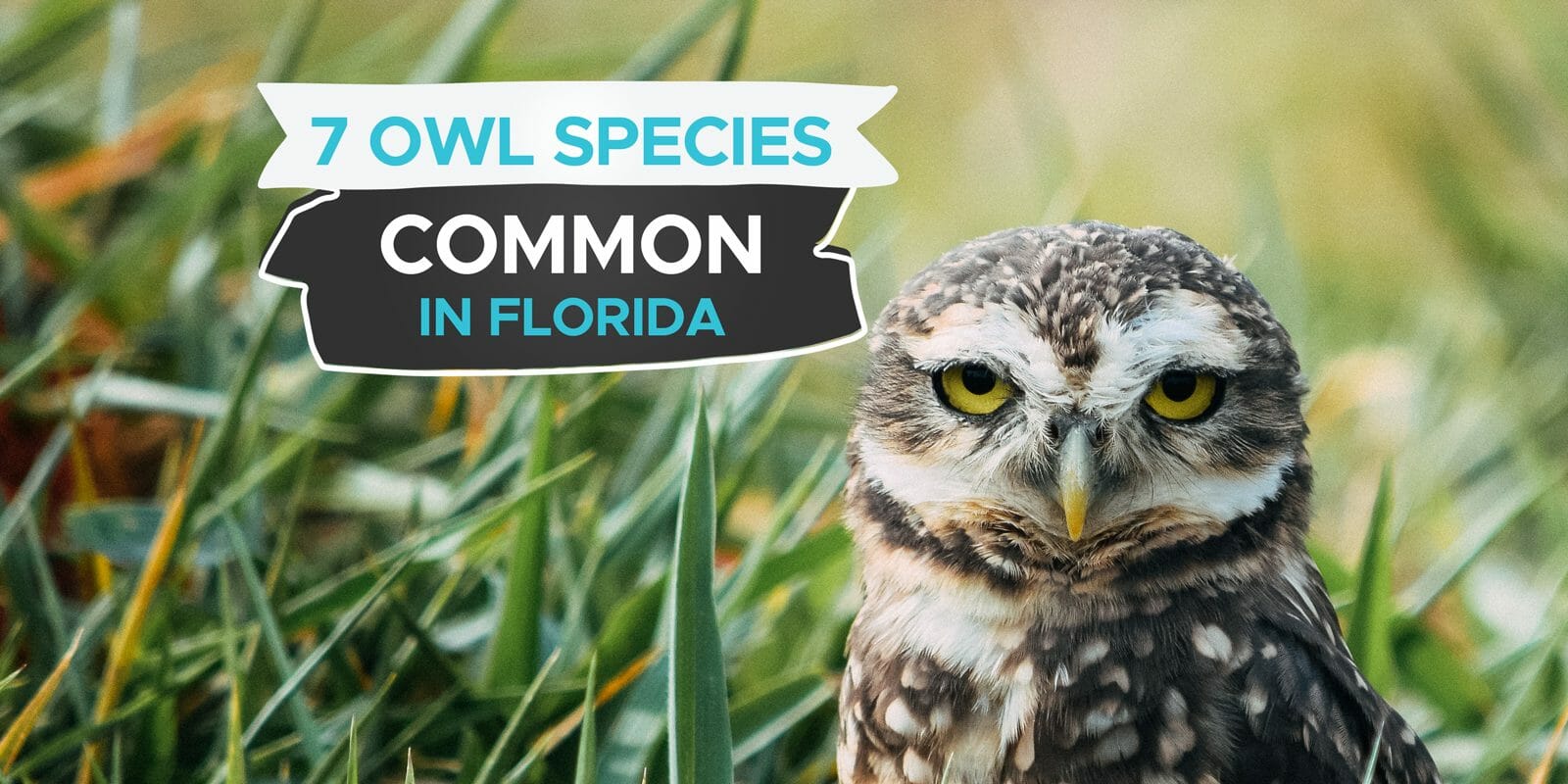 Owls are one of the most interesting birds of prey with their huge eyes and comical facial expressions. If you live in Florida, you’re indeed fortunate to have a number of owl species that call this state home.

Let’s take a look at the various species of owls that you’re likely to come across in Florida.

There are 7 species of owls that inhabit the state of Florida. Here are some interesting facts about these magnificent birds of prey.

As you can see, the largest owl found in Florida is the Great Horned owl with a massive wingspan of 57 inches. Compare this to the smallest owl in this area, the Northern Saw-Whet owl which only has a wingspan of 18.9 inches.

Let’s look at these owl species individually and explain some of their more distinguishing features. 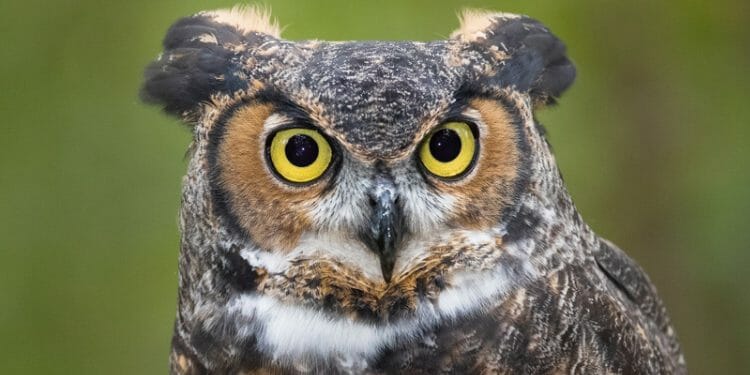 The Great Horned owl is the most commonly found owl in Florida. You’ll find this owl primarily in semi-open forests where the trees are spread apart. Here are its most distinguishing features.

The Great Horned owl prefers a diet of mammals and other birds. It’s quite a fierce bird of prey and can take down animals that are much larger than itself. If there are no larger mammals within range, this owl will also feast on mice, frogs and scorpions.

This majestic owl has few predators and is very good at adapting to its environment.

The American barn owl has the softest features and almost looks cuddly with its heart-shaped face and lovely soft eyes. Here are its most interesting features.

Barn owls inhabit woodland areas, farms and definitely like to hang out in barns. Especially abandoned ones. Unfortunately, due to a major loss of habitat, these birds are becoming endangered and their numbers are dwindling.

Their diet consists mainly of small rodents which they swallow whole. This makes them a favorite with farmers as they keep local rats and mice under control. 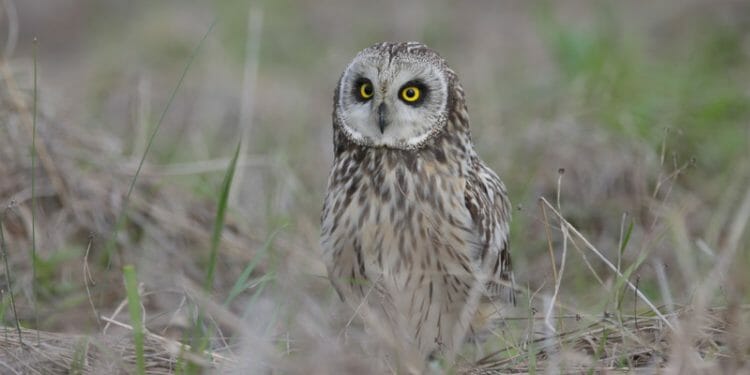 The Short-eared owl is one of the most distributed owls in the world. Interestingly, this owl can be seen during the daytime as it hunts for food. Here’s how to tell this owl apart from the other species.

This owl prefers open fields and marshes and can often be found at airports. The movement caused by aircraft stirs up plenty of insects for these owls to feed on. The Short-eared owl mainly hunts at dusk and in the early morning. Apart from insects, these owls also like to feast on voles which are their favorite meal. 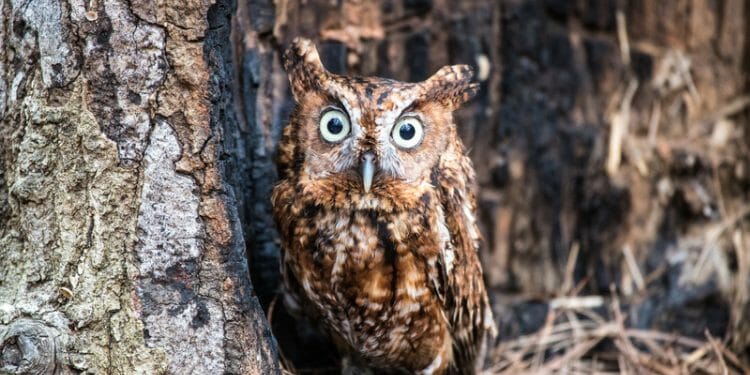 The Eastern screech owl also has ear tufts on the top of its head but it’s much smaller than the Great horned owl and also has no neck. This makes the owl look quite short and stocky. Here are its most distinguishing features.

These owls can commonly be found in backyard nesting boxes but can also inhabit other wooded areas. The Eastern screech owls are actually quite comfortable around humans and have been known to nest on top of streetlights or inside populated buildings.

These owls have a varied diet consisting mainly of moths, beetles, crickets and other large insects. They will also feast on other small birds, lizards, frogs and small mammals like rats and mice. 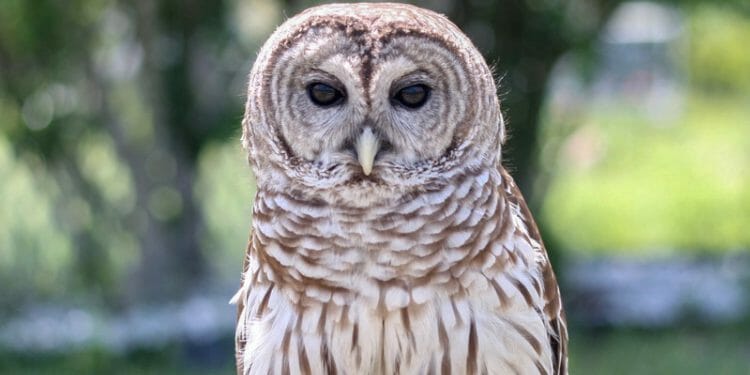 The Barred owl is completely nocturnal and is one that can commonly be seen out hunting at night in Florida. Here’s how to identify it.

Barred owls are very inquisitive and love to watch humans from the trees above as they walk by underneath. Their preferred habitat includes large, mature forests but they have also been known to use backyard nesting boxes. 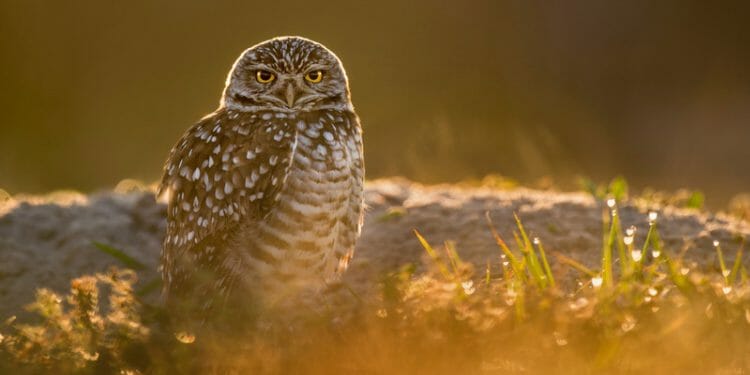 As their name would suggest, Burrowing owls actually dig a hole in the ground where they will build their nests. Sometimes, they’ll also take over burrows made by other animals and use them as a storage for food.

An interesting fact about this owl species is that they will place animal manure around the entrance to their burrow to attract insects which they can then feed to their young. Here’s how to identify a Burrowing owl.

Burrowing owls prefer to live in deserts and grasslands. Their diet consists mainly of insects such as dung beetles. 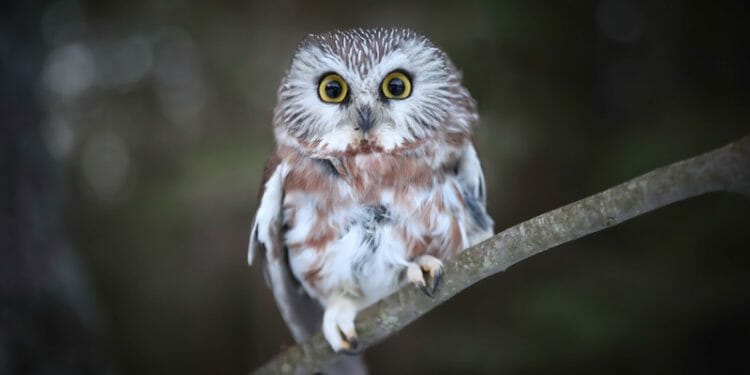 This must be one of the cutest owls you’re likely to see. It’s quite small and dainty with big, bright eyes. Apart from its small size, here’s how to identify it.

These diminutive owls are not that common and are mainly seen in winter in Florida. They prefer evergreen trees and will stay very close to the trunk of the tree just above eye-level. Their favorite meal is the deer mouse but because of the owl’s small size, one mouse is usually enough for two meals.

There are 7 species of owls commonly found in Florida. The most common of these, the Great-Horned owl is also the largest. Most owls are nocturnal and come out at dusk to hunt for prey. However, there are some that you may be able to spot during the day.

Once of the best ways to work out whether there are owls nearby is to listen for their distinctive calls. Also, if your local songbirds are a little agitated, it might well mean that there’s an owl in the area.