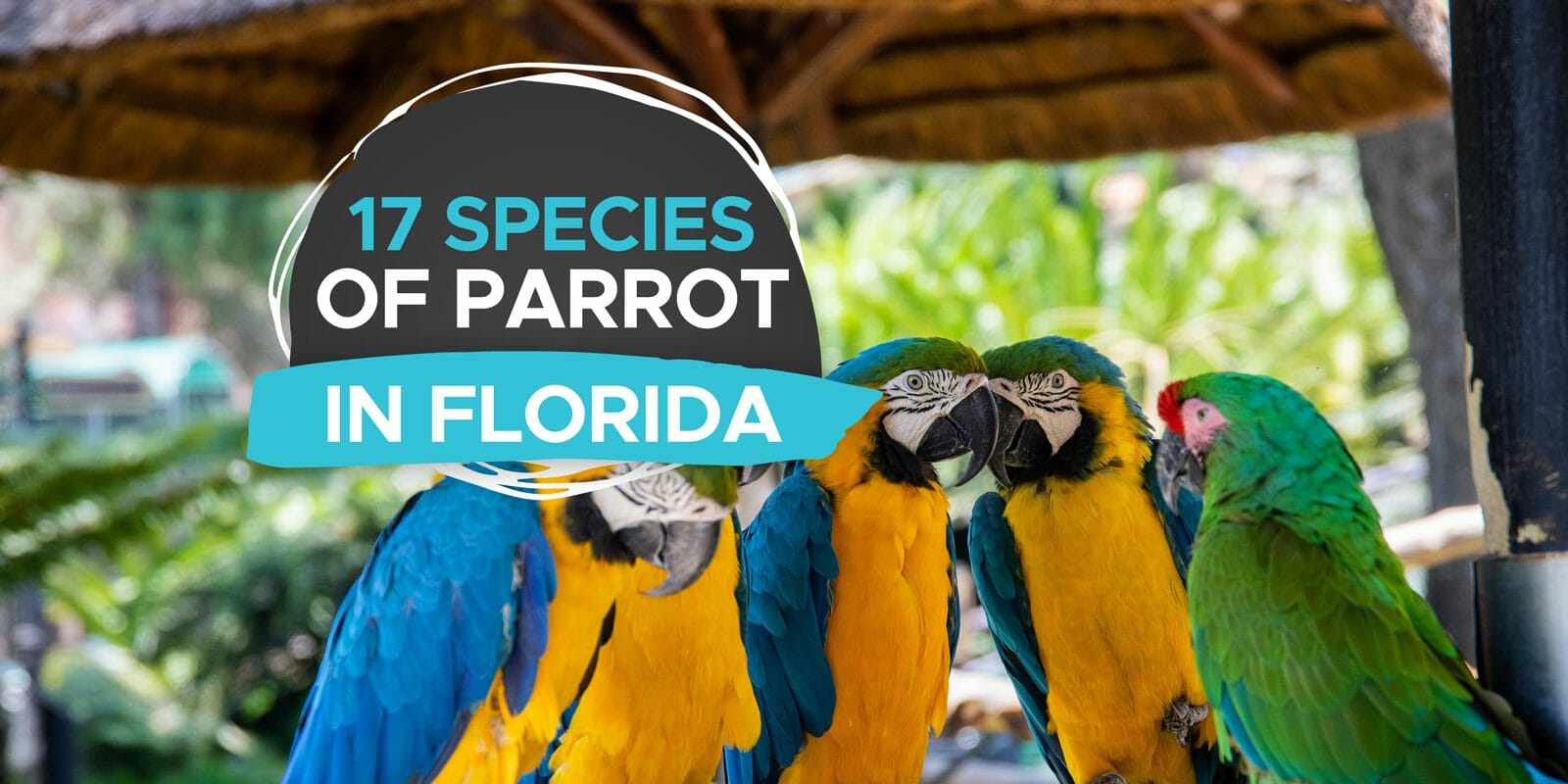 It’s common to see many different species of parrots flying around Florida, but you might be interested to learn that none of these are actually native to the state. There was only one species of parrot that was native to Florida, the Caroline Parakeet, but this is now extinct.

All of the parrots that you see often have been accidentally introduced by the exotic pet trade. These birds are generally native to places like Southern Asia, Africa and South and Central America.

Nevertheless, there are now many species of parrots that call Florida home.

There are 17 common species of parrots that can be found in Florida. Here are some interesting facts about each one.

As you would imagine, the macaws are the largest species of parrots found in Florida and the budgerigars are the smallest. 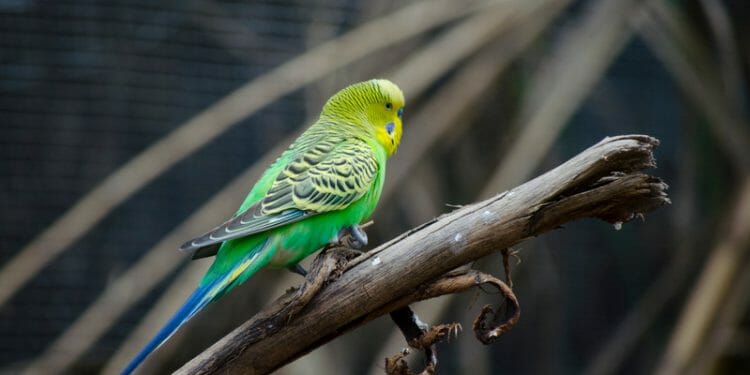 In the wild, budgerigars are only colored green. However, many breeding mutations have resulted in these birds displaying a variety of colors including white, blue and yellow.

They’re mainly distinguished by their black and white striped back feathers and wings and the same stripes appearing on the back of their heads. These birds mainly feast on seeds, fruits and berries. 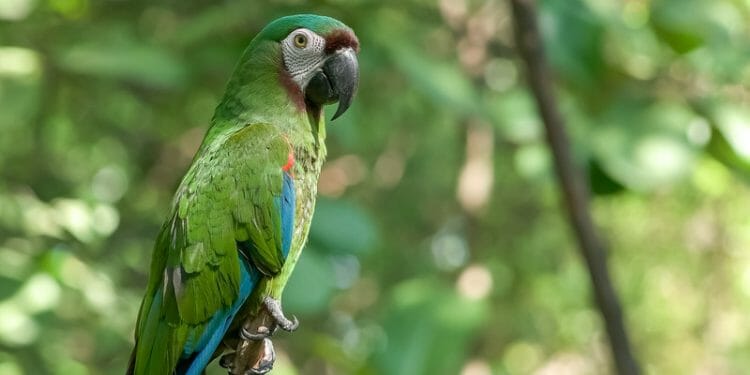 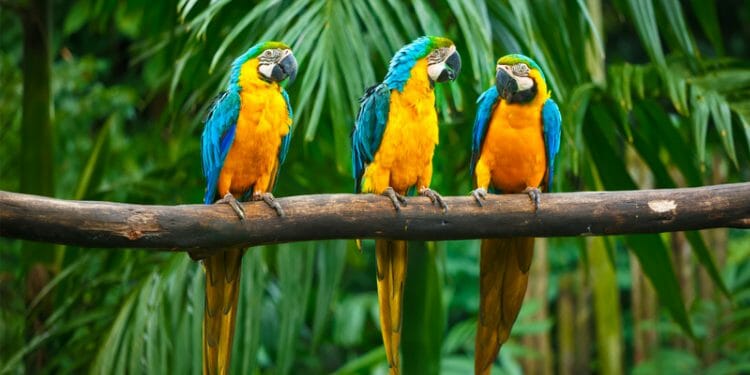 Blue and yellow macaws are large birds and the most striking to look at. Their head and back feathers are bright blue while their chest and the underside of their wings are bright yellow. They also have a patch of green on top of their head. They have white cheeks, a large black beak and black feathers under their chin.

These large birds like to feed on fruits, nuts, seeds and other plant material. 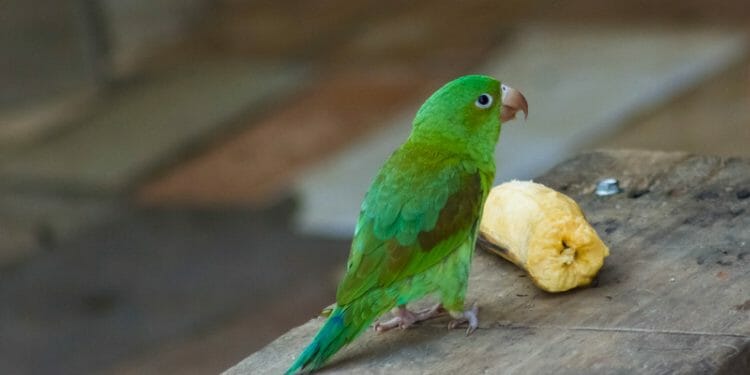 As you might have guessed, this parakeet is entirely green. In fact, it’s the only all-green parakeet in Florida and the whole of the United States. These birds also have a long, pointed tail and may exhibit a small amount of red speckling around the neck.

These parakeets like to feast on seeds and fruits. 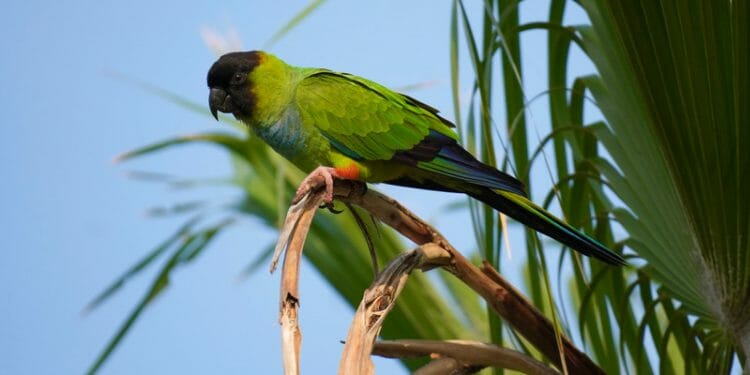 Nanday parakeets are quite distinct in that they have a black head and beak. Their feathers are mainly a lime green but they have a blue coloring on the chest and the outer wings.

The Nanday parakeet likes to feast on fruits, nuts, vegetables and berries. 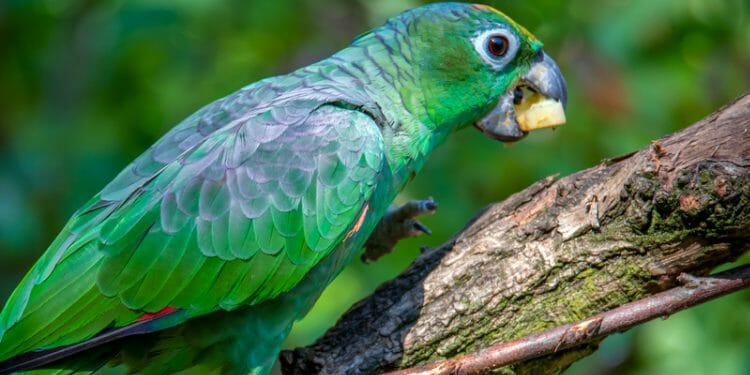 The most distinguishing feature of the orange winged parrot is the splash of orange that is apparent on the front edges of their wings. You can only really see this when the bird is in full flight.

Otherwise, these birds are mainly green with patches of blue and yellow on the head and yellow cheeks.

These parrots like to eat a variety of fruits, nuts, berries and seeds. 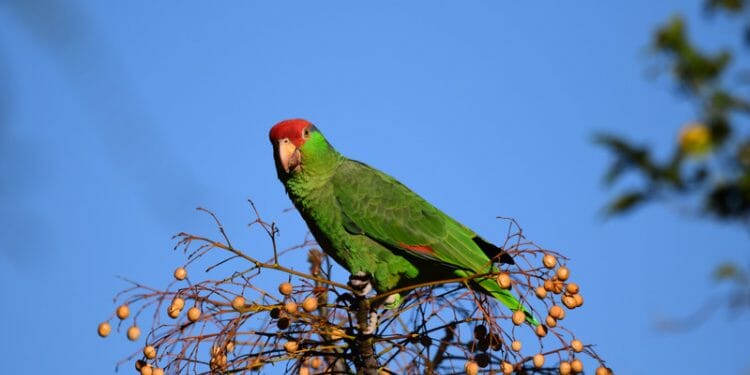 This parrot can easily be distinguished by the bright red feathers on the top of its head. There’s also a faint patch of blue behind the parrot’s eyes. The wings of these birds have dark blue tips as well as a red patch.

These birds mainly feed on fruits, seeds, and berries. However, they’ll also eat flowers and nectar. 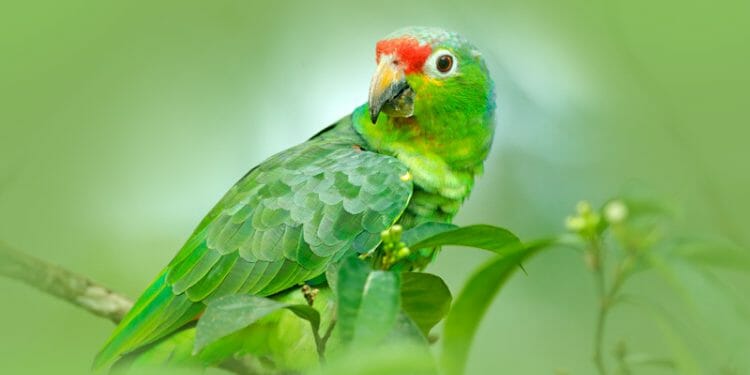 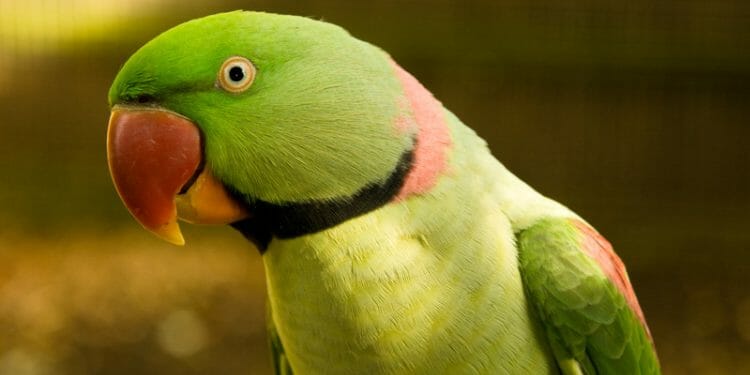 Rose-ringed parakeets can be identified by their bright red beak and a red ring around their eyes. They are generally pale green in color and the males have a thin black line around their neck.

These birds also have long, pointed tails. They’re also commonly known as Indian ringnecks. Like many other parrots, these birds prefer a diet that consists of fruits, nuts, berries, vegetables and seeds. 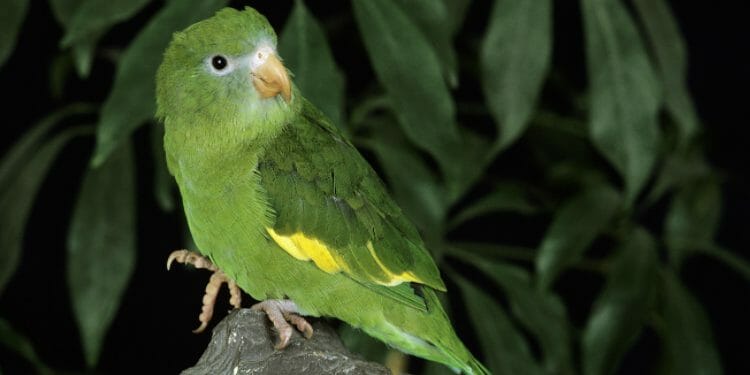 The yellow chevroned parakeet is somewhat similar to the white winged parakeet except this bird does not have the white patches on its wings. Instead there’s a bright yellow patch while the rest of the bird is light to olive green.

These parakeets feed on fruit and seeds but may also eat nectar and can often be seen at backyard feeders. 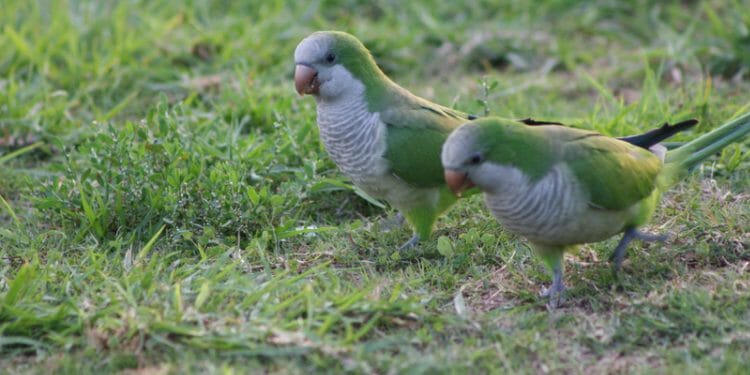 Monk parakeets can easily be distinguished by their gray chests, faces and throats. Most of their feathers are pale green but they do have some blue on their wings. Interestingly, monk parakeets don’t nest in cavities. Rather, they build their nests out of sticks and live in a colony. Some of these colonies can be rather large and get added to every year. 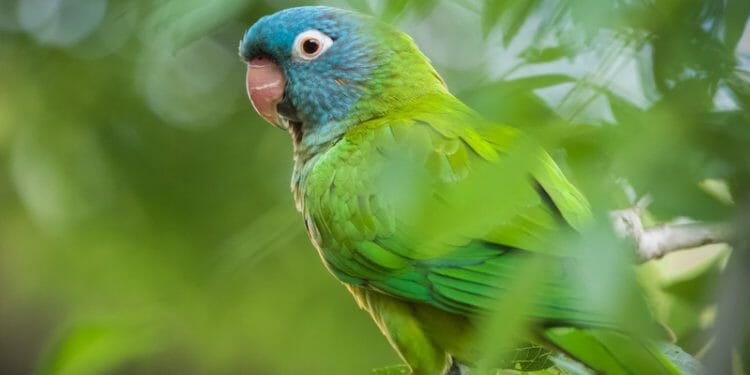 These birds can be distinguished by the white ring that they have around their eyes. Otherwise, they’re mainly green with a blue patch on the top of their head. Their inner tail feathers are red but this can only be seen when these birds are in flight. 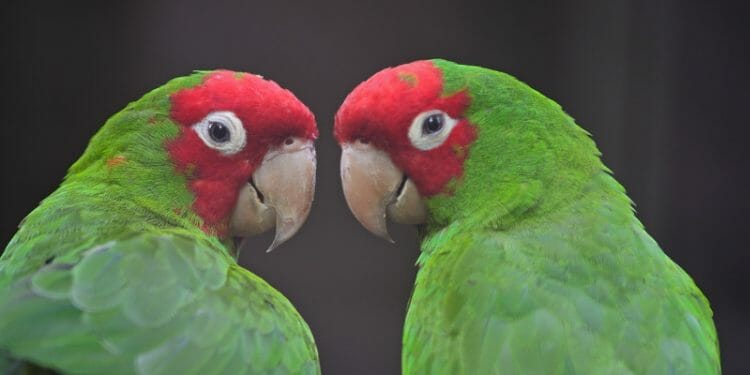 These parakeets are easy to identify with their bright red heads. Otherwise, their feathers are an olive-green but they do have red around their upper wings. They also have a distinctive white ring around their eyes.

These birds prefer a diet of fresh fruits and nuts. Unlike red-masked parakeets, mitred parakeets only have patches of red around their eyes and not on the top of their head. They are similarly, pale green to olive green in color. They may also have some red patches of color around their throats and back of the head.

These birds like to feast mainly on nuts, seeds and fruit. 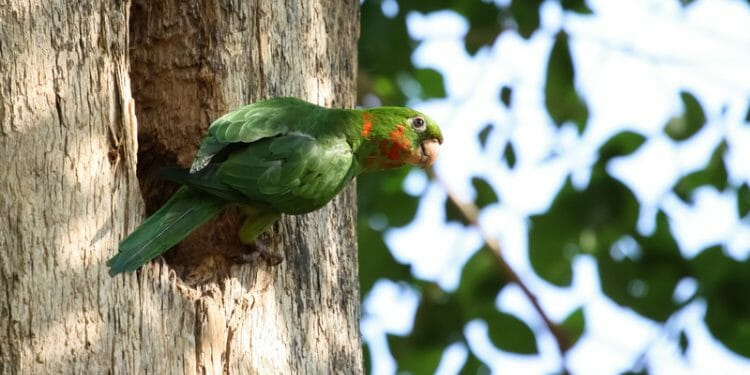 White-eyed parakeets only have small spots or patches of red on their cheeks and base of the head. Otherwise, they are dark green in color with a lighter green on the chest. They also have a white ring around their eyes. The underside of their wings is yellow in color. 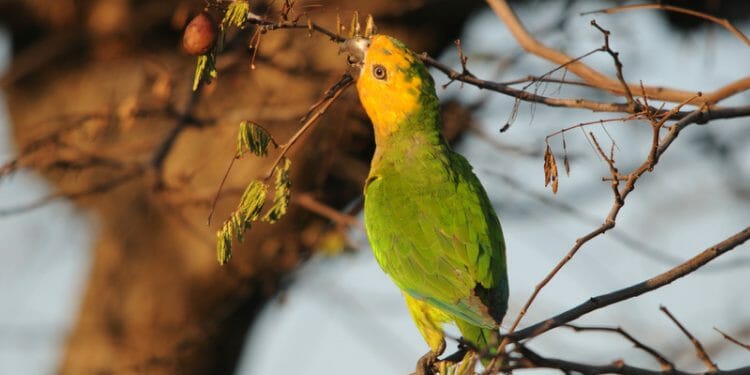 You guessed it, these parrots are easily identified by their bright yellow heads. They also have red shoulder feathers and some red feathers on the tips of their wings. These birds are endangered and their numbers are declining in Florida.

Their diet consists mainly of nuts, fruits, berries and seeds.

There are seventeen species of parrots that now call Florida home, although none of these are native to the state. All have been introduced by the exotic pet trade and have escaped from captivity to breed and enjoy their freedom.

If you’re out travelling around Florida, you might like to familiarize yourself with the different distinguishing features of each species so that you can readily identify any parrots that you spot. Although, this can be difficult for some species as they have similar characteristics that make them hard to separate.