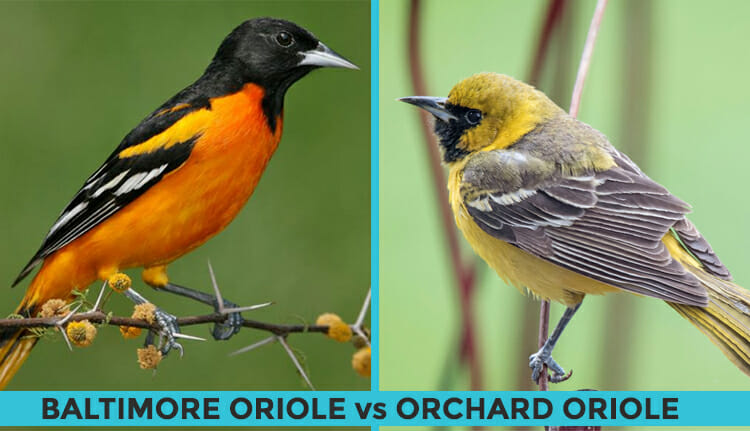 During their summer migration, orioles can be seen all over North America. With their bright colors and happy songs, they are welcomed to gardens all over the country. There are many species of orioles, but two of the most common are the Orchard Oriole and the Baltimore Oriole.

Here we take a look at each to see just how alike, or different, they are.

Orchard Orioles are the smallest orioles to be seen in North America. 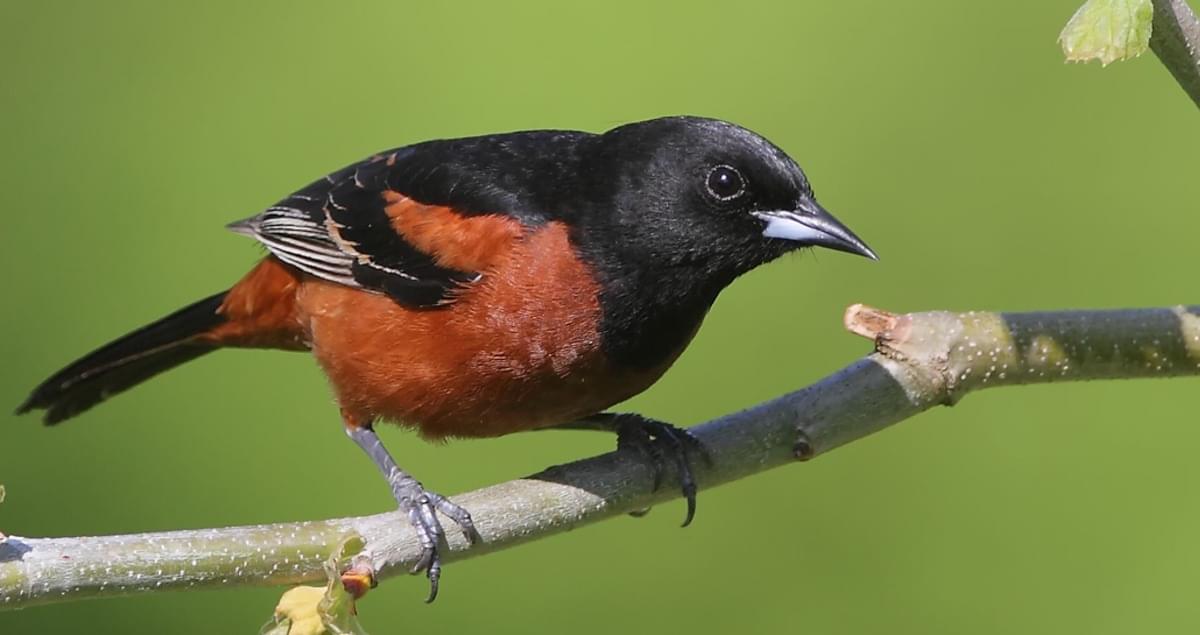 Orchard Orioles are a very communal and friendly species. They mix well with each other and their nests can be found with those of other orioles, including Baltimore Orioles. They also nest with Kingbirds, and these can help ward off predators such as Cowbirds.

These small birds are slim, with rounded heads. Their tail is medium length and, as you’d expect, they have a pointed bill.

Male and female Orchard Orioles are the same size.

As the name suggests, Orchard Orioles like woodlands and orchards. They prefer open woodland to dense forest and areas along the edge of a river. Fields and pastures with trees scattered around are an ideal place to find them.

If they find a suitable spot, then you will see these birds building their nests in the same trees.

During the winter, the Orchard Oriole likes to stay in the warmer climate of Mexico and Central America.

During the summer migration, they can be seen in the southern parts of North America, as far as Southern Canada, and across the middle of the US.

These orioles have one of the shortest breeding seasons.

They begin the journey north in mid-late spring, with their return journey starting as early as mid-July. They often travel in flocks.

The female will make a nest in open woodlands and often shares the same trees with other orioles and birds. The nest hangs underneath the branch like a little pouch, and will hold between 4 – 6 eggs. The mother sits on the nest for 12-15 days, and they will leave the nest between 10-14 days after they have hatched.

Once the babies have hatched, the father helps with the feeding, and a pair of orioles will only produce one brood per year.

If you have feeders in your yard, then Orchard Orioles love them. They visit gardens which are rich in fruits and nectar.

In the woodlands they drink nectar from flowers in the fields and eat berries from bushes and trees. They also forage in the trees to find insects, including wasps, spiders and grasshoppers.

Baltimore Orioles are probably the most common member of the species, but they are often mistaken for Bullock’s Orioles. 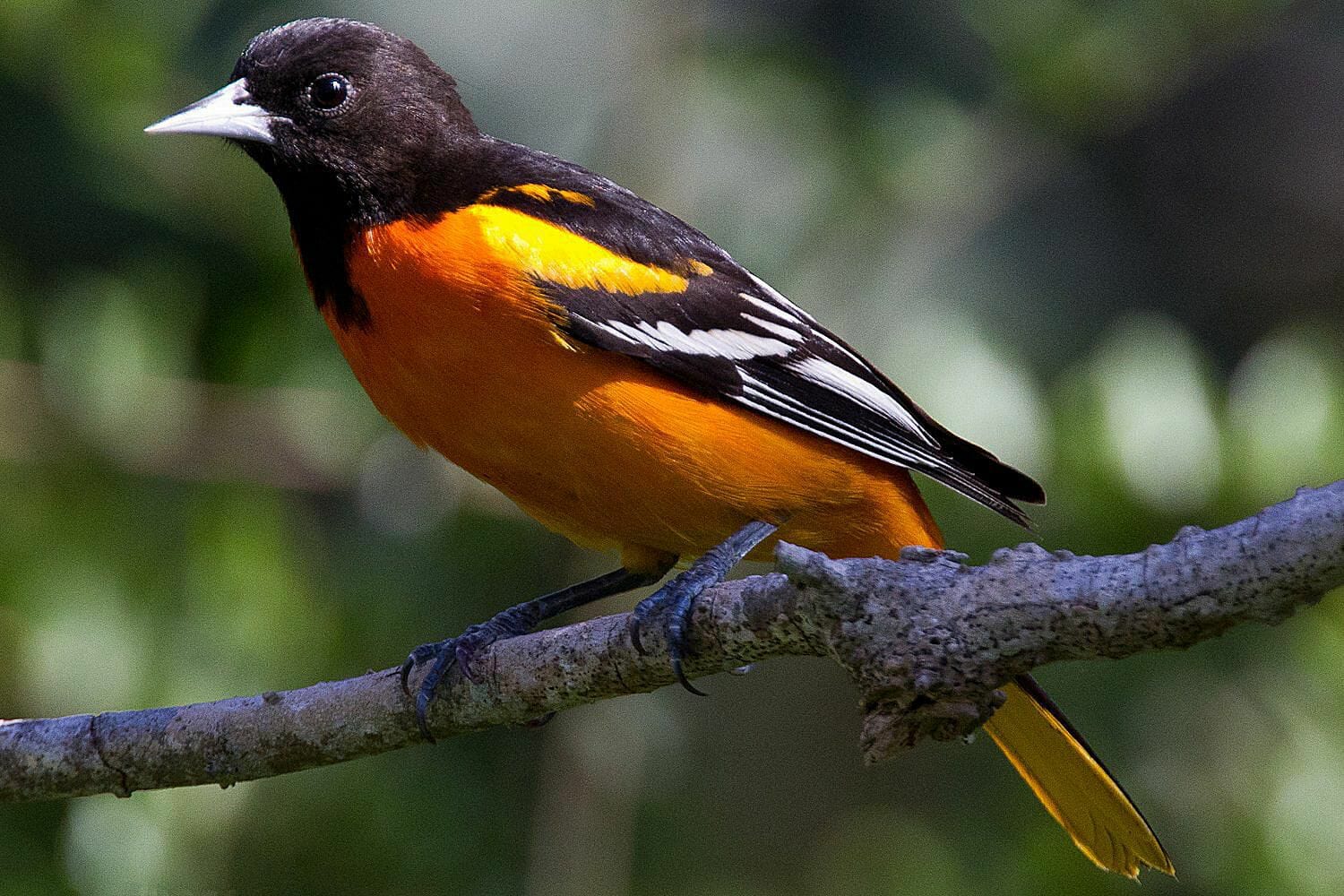 These orioles are also very social birds, and live together in flocks quite happily. They will share their habitat with other orioles and will breed with Bullock’s Orioles, which has led to confusion when trying to identify the two different species.

Baltimore Orioles do look very similar to Bullock’s Orioles. They have thick necks, long legs and a pointed bill.

Male and female Baltimore Orioles are the same size.

The Baltimore Oriole enjoys the same sort of habitat as the Orchard Oriole. They prefer open woodlands and orchards, and will avoid dense trees.

During their summer migration, Baltimore Orioles can be seen as far north as Montana and the Canadian Prairies. They also breed further south, in Mississippi, Georgia and Alabama.

During the winter they live in Central and South America and Mexico. These orioles are permanent residents in parts of south western California.

The migration north starts in April and goes on through May. They spend the summer months rearing their young and start to return south during August and September.

The nest is very similar to the Orchard Orioles and they can often be seen nesting in the same trees. They lay between 3 to 7 eggs which hatch after 12-14 days. Both male and female birds then feed the young until they leave the nest around 2 weeks after they hatched.

Baltimore Orioles feed on insects which they find by foraging high in trees and they love caterpillar moths. They also love fruit and will eat it from trees or bushes and they love darker fruits such as red cherries, mulberries and purple grapes. If you have an oriole feeder in your garden, there’s a good chance they will come and feed off the nectar.