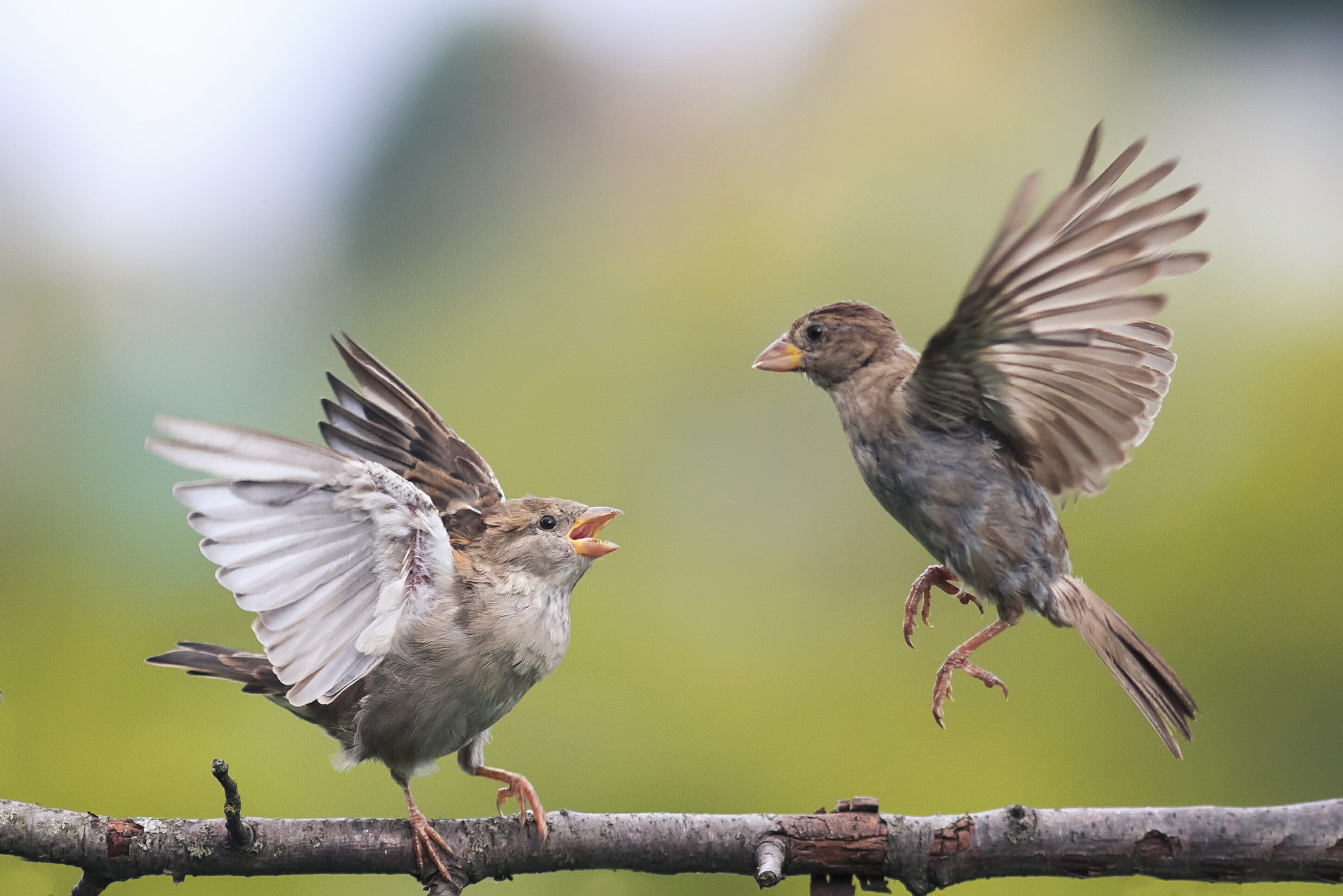 The first 3-4 weeks of a bird’s life is an exciting time. When they are born they are mostly helpless and rely on their parents to feed them and keep them warm. They soon open their eyes and their downy feathers disappear to be replaced with their flight feathers.

The time taken for a bird to learn to fly from being born varies, but it is generally between 10 days and 3 weeks.

Let’s take a look at some of our favorite birds and find out how they go from hatchlings to fledglings.

Hummingbirds are amazing and when it comes to the breeding season they can travel hundreds or thousands of miles to get to the right spot, often without much of a rest.

Ruby throated Hummingbirds are one species which make an incredible journey to breed. They fly hundreds of miles across the Gulf of Mexico non-stop and then fly back again after breeding.

The female birds incubates and raises the young on her own as the male plays no further part after mating has taken place. They breed from March to August and peak breeding season is during the middle of May. She will only leave the nest during incubation long enough to find food or to chase away potential predators.

When the chicks are born they rely on their mother to feed them and protect them. Hummingbirds need plenty of energy and the babies are no exception. They are fed up to 3 times an hour and the female finds insects for them to give them the protein they need to grow. Nectar is not a suitable diet for a hatchling.

The female bird will stay with the hatchlings and they leave the nest from about 2 and a half weeks old and start to fly. They reach maturity when they are one year old.

Anna’s Hummingbirds breed earlier and can start as early as December. They wait until the conditions are perfect, ideally when there are plenty of insects to feed the young.

They migrate to the Pacific Coast, as far up as British Columbia and to Arizona each breeding season. Just like the Ruby Throated Hummingbirds, Anna’s Hummingbirds leave it all to the female. Once they have mated, the male leaves her to raise the chicks on her own.

The new born chicks are blind and helpless and the female only leaves the nest to find food. She will stay in the nest with them for 1-2 weeks and will then leave them on their own. They will start to leave the nest and learn to fly from about 18 days old.

Baltimore Orioles are easily mistaken for Bullock’s Orioles as they have similar plumage and share the same breeding areas.

Baltimore Orioles head north during February and March to arrive at their breeding territory during April and May.  The female picks a breeding site while the male will defend it. Although these birds are territorial, particularly during breeding, you will still see many Baltimore Orioles in the same place. Unlike some birds their territory is just the area around their nest and this means that many orioles can get together and share the same breeding space.

The female bird can lay anything from 3 to 7 eggs at a time and they usually have just one brood a year. The breeding pair will stay together and they are often considered to be monogamous.

When the eggs hatch the parents will both take a part in caring for them and the babies leave the nest and learn to fly when they are 12 to 14 days old.

Canada geese are one species which mates for life and they also travel together in family groups.

While the female builds a nest the male will stand guard. They generally breed between April and June. The female also sits on the nest to incubate and brood hatchlings.

Goslings are able to peck soon after they hatch and are often taken to an area with other goslings to be raised as a form of crèche with all the parents helping to raise all the young. The babies are able to walk, swim and feed from just 1 to 2 days old when they leave the nest.

For the first 2 to 3 months goslings are not able to fly, and they molt and grow their flight feathers at around three months old. They stay with their parents for the first year of their life before flying off to find a mate of their own.

Northern cardinals breed between March and September every year.

Male and female northern cardinals stay together all year round and will take it in turns to raise their young. They often have two broods a year but the can have three if food at the breeding ground is plentiful.

During incubation and nestling the male will provide most of the food but if the female is incubating the second brood the male will take over the care of the first.

Pileated woodpeckers are another species that form strong bonds and mate for life. They build their nests inside large trees or deadwood by simply chipping away the inside.

As the pair mates for life they know they can rely on each other during the breeding season, and help each other to raise the young.

The babies will leave the nest after around four weeks and learn to fly a few days later. Their parents feed them and teach them to find food until the babies leave them during the fall.

When young birds are learning to fly they can often fall from the nest. If you see a baby on the ground, remember that their parents will still be watching it and looking after it. As their flight feathers grow, they will soon be able to fly away. Moving the bird can put you at risk of being attacked by the parent and also cause distress to the baby.