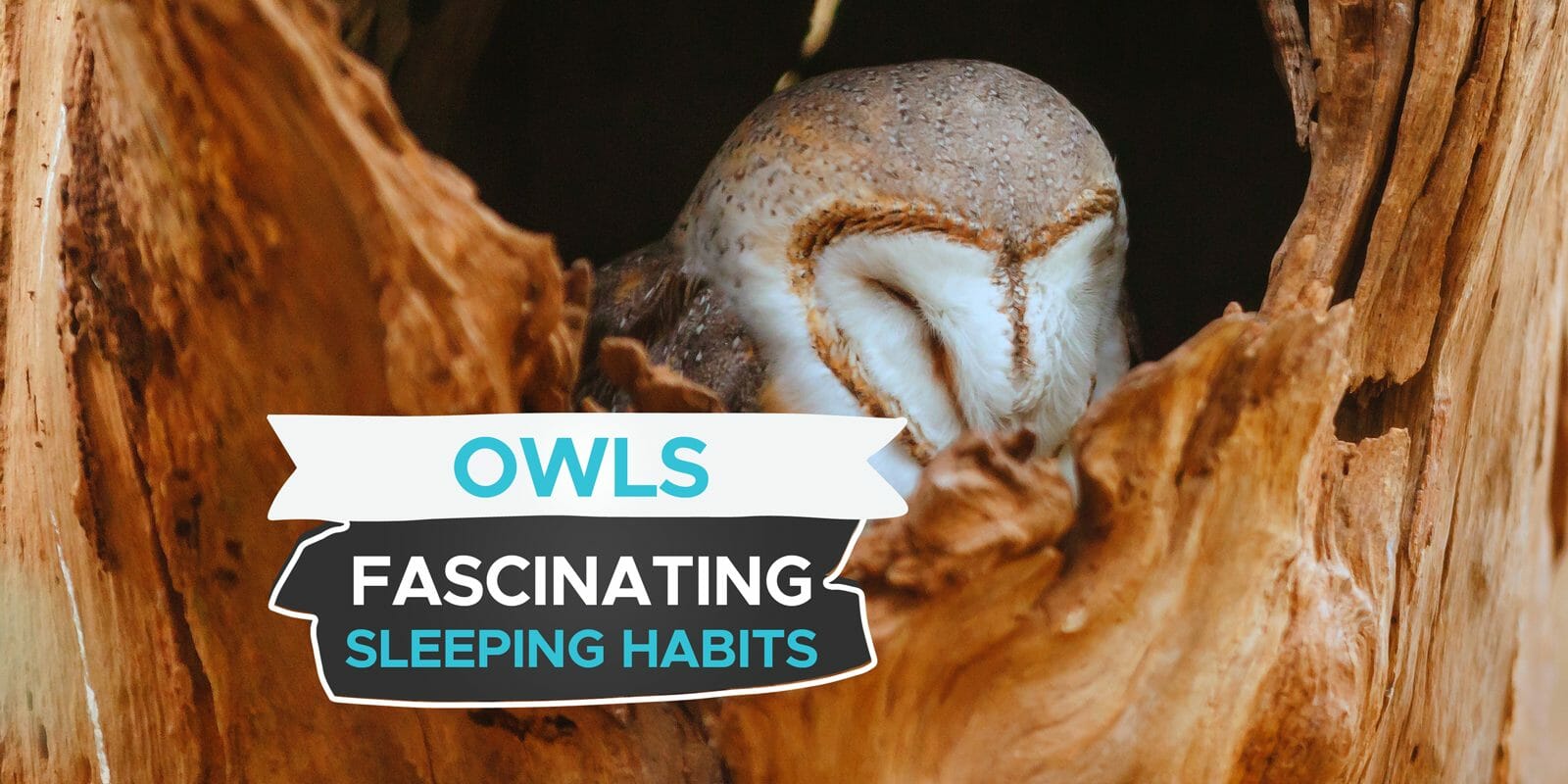 As you’re probably aware, most owls are nocturnal animals. This means that they sleep during the day and are awake during the night to hunt for food and do all the other things that owls like to do. But, have you wondered how owls sleep? The answer might surprise you.

Interestingly, baby owls sleep face down on their bellies or sides with their heads resting on the branch or structure that they’re lying on much like human babies. This is because owlets’ heads are fairly heavy and it’s hard for them to hold them up while they’re sleeping because they haven’t yet developed strong neck muscles.

Once a baby owl matures more and has gained more strength in its neck muscles, it will usually sleep upright with its head facing forward or sometimes even backwards.

Let’s discuss some of the interesting sleeping behaviors of owls. 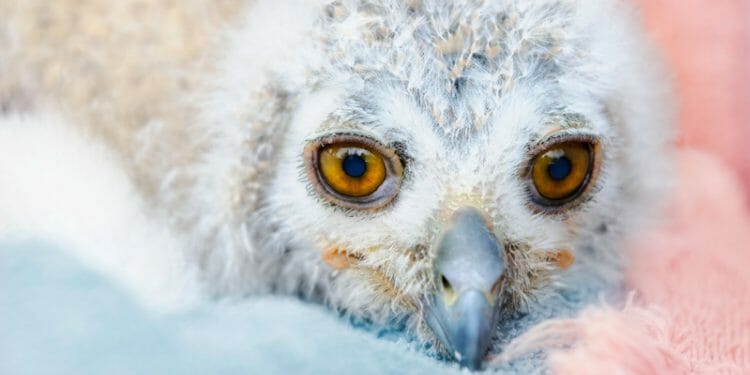 This cute baby owl is demonstrating a normal sleeping position that most owlets use because they’re not yet able to hold up their heads while they sleep.

How Much Sleep Do Owls Need?

Like other birds, owls need around 12 hours of sleep on a daily basis. Now, unlike humans, they may not get a straight 12 hours of sleep every day. Rather, owls will often take a series of short naps during the day to recharge their energy.

During these naps, owls are generally still aware of their surroundings. This is because they need to be alerted if there are any predators around that could endanger them. This is one of the reasons that you may see sleeping owls with one eye open and the other one closed. 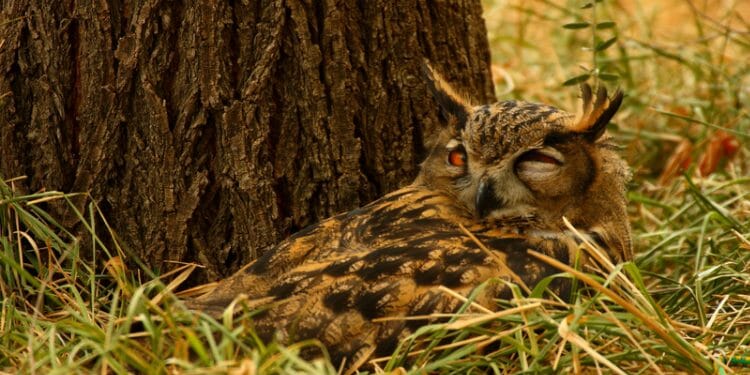 This eagle owl has found a nice comfortable spot to sleep at the base of a large tree. Notice how it has one eye open and the other one closed.

Do All Owls Sleep Face Down On Their Bellies?

It’s generally only baby owls that tend to sleep face down on their bellies. This is because their bodies aren’t strong enough to hold up their heavy heads while they’re asleep.

Once they’ve grown a little and gained more body strength, mature owls are able to sleep with their heads up while they stand on one or both legs. They use their strong claws to grip onto the branch that they’re resting on.

Unlike other birds, owls cannot tuck their heads under their wings. This is because the shape of an owl’s head is vastly different to that of many other birds. Therefore, adult owls will generally just shut their eyes to go to sleep while they’re perched on a branch or other structure.

More often than not, their heads will be facing forward while they sleep but sometimes, they may turn their heads toward the back.

It’s also interesting to learn that baby owls have a much deeper sleep than adult ones and will actually dream. However, as they get older they seem to dream less. 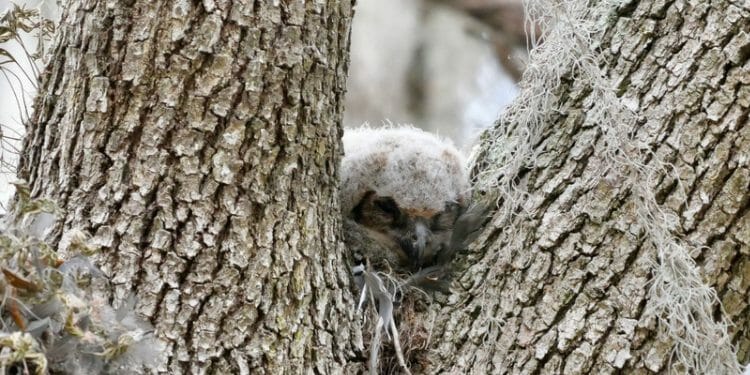 Here’s another owlet fast asleep in the nest. As you can see, it’s lying on its belly with its head almost face down.

Where Do Owls Commonly Sleep?

You may or may not know that owls are actually very solitary birds. This means that they prefer to hunt and sleep alone. To find the ideal sleeping perch, an owl will look for a spot that is quiet and away from a lot of activity. Remember that many owls sleep during the day when most other animals and humans are awake.

The most common sleeping spot for an owl is high up in a tree, resting on one of the inner branches that provides them with protection and also a little noise buffering. Some owls may also seek out tree hollows that they can slip into. Other owls will sleep on ledges on cliff faces.

When sleeping in trees or other high-up structures, owls stay secure on their perch by hanging on with their back toe. This toe is referred to as a hallux. It has the unique ability to continue its grip and will not let go until the owl actually bends its leg. This stops owls from falling off their roost while they’re sleeping.

Owls that live in more urban areas may choose man-made structures like deserted buildings, chimneys and even dark spots in barns to get some shut-eye.

Interestingly, owls don’t sleep inside the nest, even during breeding season. They more commonly will find a safe perch near the nest to get some rest during the day. It’s only the baby owls that will sleep in the nest while they’re still quite young.

Another interesting fact to consider is that owls are not good at building nests. This is why primarily, they steal the nests of other birds such as hawks and falcons when it comes to breeding time. 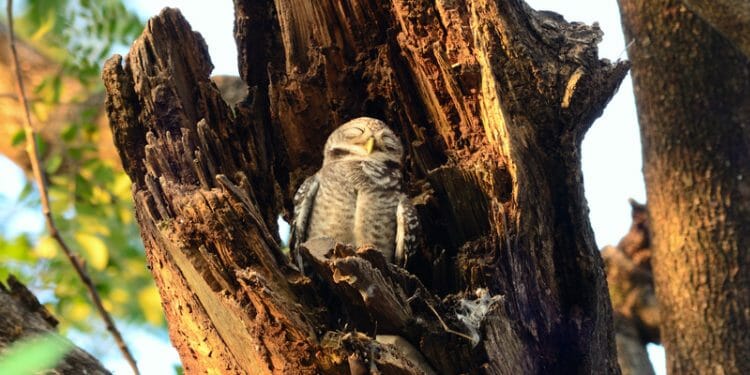 This spotted owl is sleeping in a position that is fairly typical for adult owls, safe within a tree hollow.

When Do Owls Get Ready For Sleep?

Most owls will start to think about getting some sleep just before sunrise. At this time, they’ll look for a safe comfortable spot where they can rest without being disturbed.

It might interest you to learn that owls can fall asleep really quickly, like in 11 seconds. However, when they sleep, only half of their brain is asleep while the other half is fully alert.

If you’ve ever come across a sleeping owl during the day, you may notice that its eyes are open even though they look like they’re in a resting position. 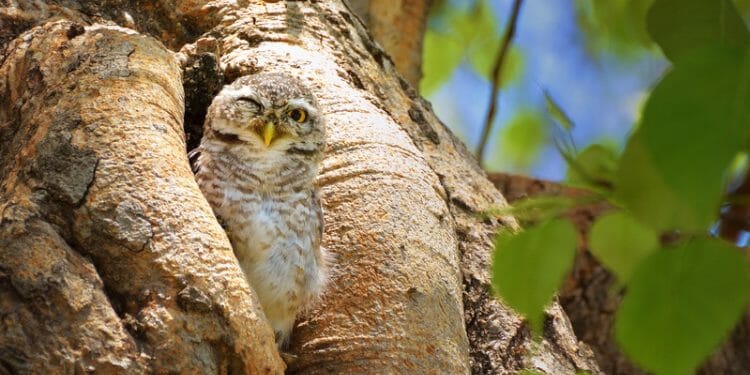 This spotted owl is showing how adult owls sleep with only half their brain and remain alert with the other half.

What Happens When A Sleeping Owl Suddenly Gets Awakened During The Day?

If something suddenly wakes up an owl that is sleeping during the day, the owl will quickly try to blend in with its surroundings. This is referred to as an erect posture.

In this posture, the owl will stretch its neck as far as it will go and raise its ear tufts so that they’re standing upright. The owl will also shut its eyes until they look just like slits. Once the owl has achieved this posture, it will stand perfectly still.

This reaction to being awakened suddenly is simply a defence mechanism and a way for the owl to camouflage itself in case there are predators nearby. 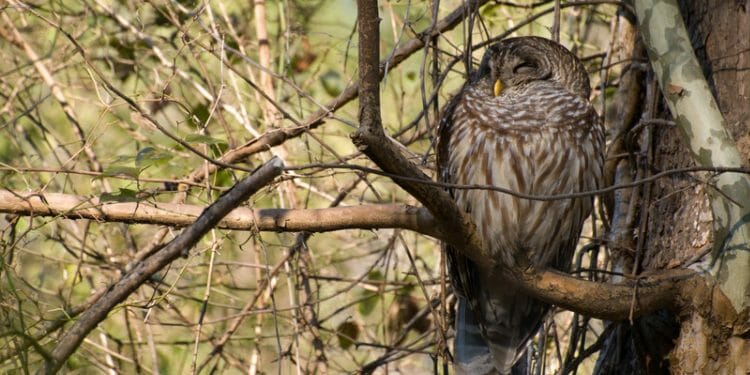 This lovely barred owl has found the perfect resting spot within the crook of a tree.

Are All Owls Nocturnal?

Although many owl species are nocturnal, not all owls sleep during the day and are awake during the night. There are in fact, three classes of owls around the world. 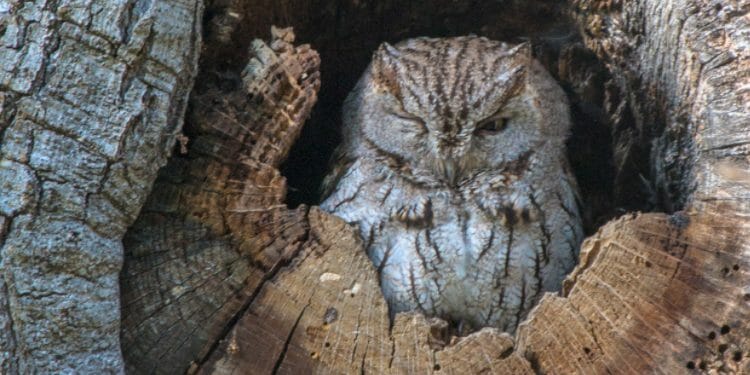 Here’s another sleeping owl in a tree hollow with one eye open and the other closed.

The Distinction Is In The Eyes

If you’re wondering whether you can tell if an owl is nocturnal, crespuscular or diurnal just by looking at it, you actually can. All you have to do is look at the owl’s eyes.

Now you know exactly how to identify whether an owl is nocturnal or not just by looking at its eyes. 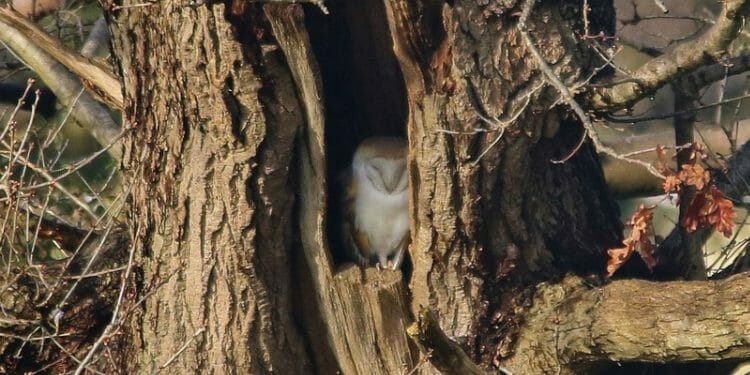 This cute barn owl has found the perfect hiding spot to get a little shut-eye during the day.

Now you know that it’s only baby owls that sleep face down mostly on their bellies. This is because their neck muscles aren’t developed enough to hold up their large heads while they’re sleeping. This makes them appear quite unusual when they’re asleep.

On the other hand, adult owls tend to sleep while they’re sitting up in the crook of a tree or a tree hollow. Some owls even sleep on safe ledges on the face of cliffs. Nocturnal owls that sleep during the day prefer nice, quiet spots where there isn’t too much human activity so that they can get some peaceful rest.

Surprisingly, many owls will only sleep with half of their brain while the other half is wide awake. This helps the owls to keep a lookout for possible predators and keeps them safe while they’re taking a much needed nap.