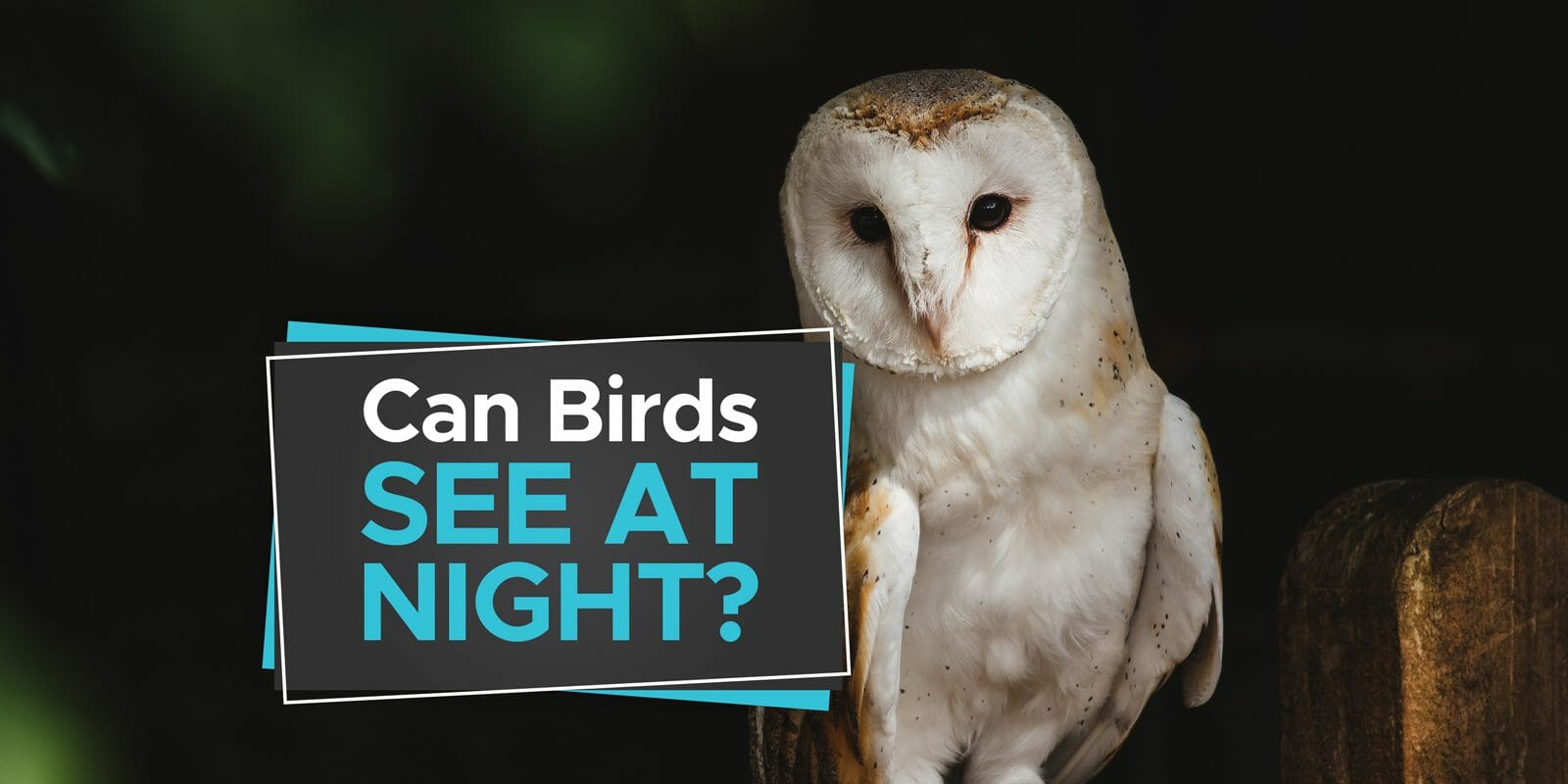 As we all know, birds have the most amazing eyesight. This helps them to hunt for food and keep away from predators. But, have you ever wondered whether birds can see at night.

Birds can see at night but some species have better night vision than others. Nocturnal birds such as owls have amazing night vision that allows them to fly around and hunt for food in the night. It is believed though, that birds aren’t able to see in total darkness.

Let’s have a look at the anatomy of a bird’s eye and how it functions.

What Is The Anatomy Of A Bird’s Eye?

A bird’s eye is somewhat similar to a reptile eye. They’re much flatter than human eyes and their lenses are pushed forward. This effectively increases the size of the image that the retina can see.

You’ll also notice that their pupils are quite large. This allows more light to enter the eye and thus, birds can see far better in the dark than humans can.

Interesting Fact
Because birds can detect very slow movement, they are able to actually see the sun’s movement.

Birds also see more colors than humans can. This is because they are tetrachromats which means that they can see four color spectrums – green, blue, red and UV. On the other hand, we humans can only see green, blue and red. UV light has no color that we can distinguish.

However, it’s this ability to see UV that allows birds to see tiny insects often miles away even at night time. To put this into more perspective, birds can see colors that we simply cannot see. This is also how they distinguish males from females. To a bird, a somewhat plain female may exhibit many different ultraviolet colors that are only perceptible to birds.

Understanding Rods And Cones In The Eyes Of Birds

Rods and cones are photoreceptive cells that cover the retina or the inner light receptive part of the eye. So they are basically light receptors.

In general, rods are far better for night vision because they are sensitive to low light. The more rods that are connected to each nerve cell, the more sensitive the eye is under low light conditions. However, this increased sensitivity or ability to see in the dark comes with a loss of definition which means that things may look a little blurry.

On the other hand, cones allow birds to distinguish between different colors. The more cones that a bird’s eye has, the less sensitive to low light conditions. However, these cones work very well in being able to spot minute details of objects quite far away. Different cones also focus on different colors. As you can see, birds’ eyes are highly complex mechanisms.

To explain this further, there are two light receptors within a bird’s eye. These are rods and cones. Nocturnal birds have more rods than cones because these allow the birds to see extremely well at night. These rods are highly sensitive to low light conditions and allow as much light in as possible so that nocturnal birds can see really well.

On the other hand, diurnal birds have more cones than rods in their eyes. These allow them to differentiate between all the different color spectrums. Surprisingly, these cones only work during the day. Even so, diurnal birds can still see far better than humans in the dark.

What Things Can All Birds Do At Night?

Although diurnal birds are generally not active at night, there are some things that they can do almost as well as nocturnal birds. Both diurnal and nocturnal birds will participate in night singing, night dancing and night migration.

Let’s look at these activities in more detail.

You may have been woken up during the early hours of the morning, when it’s still dark, by a bird singing enthusiastically and be wondering why.

Primarily, birds will sing at night to warn other birds away from their territory. They often do this at night because the sound will carry much farther due to the absence of other noises.

During mating season, it’s quite common for songbirds to sing at night in order to attract a mate. This may especially be the case when there’s a bright moon shining in a clear sky.

Also commonly known as sky dancing, you’ll find birds performing this activity during spring when it’s nesting season. Male birds have been seen performing elaborate flying techniques during the night. During these displays, they fly in circles in the sky before plummeting back down to the ground.

After performing these aerial feats, the male birds will find a suitable perch and start singing in the hope that they will attract the perfect mate. These activities might go on all night long.

It’s common for smaller birds to actually conduct their migratory journey during the night. This is mainly due to safety as it helps them to stay away from predators, especially larger birds.

During these migratory flights, the birds use the stars to navigate and prefer to fly on clear nights when there’s not too much air turbulence.

What’s The Difference Between Binocular And Monocular Vision In Birds?

There’s quite a bit of difference in the vision of birds that are monocular compared to those that are binocular. Birds that possess monocular vision usually have eyes that are situated on either side of their heads. This means that each individual eye has the capacity to focus on something different.

This gives these birds a much wider field of vision. However, the downside to this is that there is compromise to their depth perception.

On the other hand, binocular birds have eyes that are situated on the front of their heads. You’ll find that many nocturnal birds and raptors have binocular vision. This enables them to sharply focus on objects that are a long way away.

Which Birds Have The Best Night Vision?

Is it normal to see a bird at night?

It’s not all that normal to see birds at night. However, if a bird has been disturbed it might fly to another spot that is safe for it to sleep. Some bird species such as thrushes and sparrows also migrate at night because it protects them from predators.

What do birds do at night?

Most birds will find a safe spot inside the branches of a tree to sleep at night. However nocturnal birds such as owls will hunt at night and sleep during the day.

What time do birds go to bed?

Most diurnal birds that are awake during the day will find a safe spot to sleep when the sun goes down. They’ll then start to leave their sleeping spot at dawn.

Now you know that birds can definitely see at night. How well they can see totally depends on the species of bird and whether they are diurnal or nocturnal. Most nocturnal birds have excellent night vision because their eyes contain many light receptor rods that are sensitive to low light conditions.

The irises in a bird’s eye are also quite large which means that more light can get in. Obviously, this makes it much easier for a bird to be able to see at night as, even when it appears to be totally dark to our human eyes, there is still a little light.

Even though diurnal birds do not see quite as well at night, they can still see far better then humans can during the nighttime hours. In fact, many of these birds will do their courting at night when their singing will carry much further than during the day.

Additionally, there are various species of birds that prefer to migrate during the night. This gives them added protection from predators, especially large birds of prey.

It’s also interesting to learn to birds definitely see the world far differently from what we do because of their very extensive color vision. Plus, birds that are monocular can focus on a different object with each eye and have a very wide range of view.