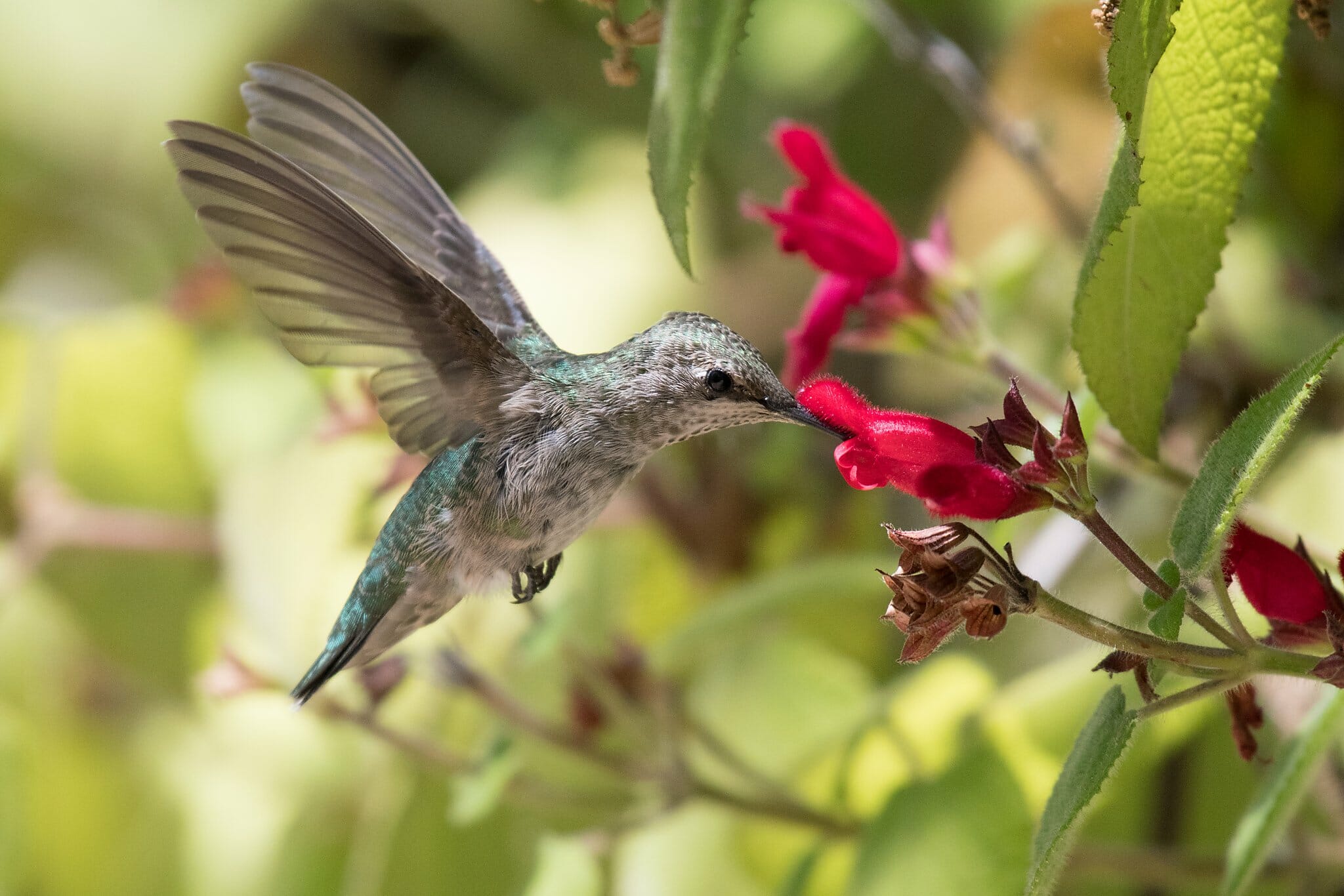 Hummingbirds, those tiny flying daredevils that captured our hearts with their beautiful vibrant colors and fascinating habits. The way they flutter through the air from plant to plant is a true sight for sore eyes, but the question is, how can we attract them so we can enjoy the company of such welcomed guests?

If you’re set on watching the tiny sprites, you need to know how to invite them in. It takes a lot of experimenting and research to pinpoint plants that hummingbirds seem to love and gravitate towards, however, we gladly made the effort and it’s totally worth it!

We’ll be talking about 8 different plants that appeal to hummingbirds, going into the details of their origin, life cycle, and appearance. But first, let’s understand what exactly are the traits of plants that attract hummingbirds.

What Are The Characteristics of Plants That Attract Hummingbirds?

Hummingbirds are not super picky, however, they do have favourite features when it comes to plants.

Hummingbirds rely heavily on sight to spot their food. Their poor sense of smell is why these tiny birds depend on bright colors to easily spot plants from a distance.

If we look at Hummingbird-pollinated flowers, we can see them flashing warm vibrant colors such as red, yellow, and orange. It also seems that such colors hide these flowers from bees to reduce competition l.

While it’s not definitely proven for hummingbirds to have particular color preferences, reds seem to pique their interest quite a bit. They’re often seen investigating feeders with red parts, red plant labels, and even res clothes on a gardener.

Hummingbirds love their nectar, lots of it, so it makes sense for their favourite plants to carry large amounts of nectar. On average, North American hummingbirds flap their wings around 53 times per second, which means they need the sugar present in nectar to fuel their high energy lifestyle.

This explains why hummingbird-pollinated flowers, for example, produce more quantities of nectar when we compare them to their insect-pollinated counterparts.

The shape of the plant is one of the most unique features that are designed to accommodate hummingbirds.

Flowers that attract hummingbirds are usually long and tubular, making them almost exclusively accessed by the small birds, thanks to their long beaks and tongues that perfectly fit such structures.

You’ll also find that hummingbirds often go for plants that droop or hang pendulously and sport modified leaves or petals to support the hovering action of their feeding activity. It’s rarely seen for hummingbirds to gravitate towards plants with large landing areas or elongated structures.

Now, we’re finally here for the real talk, so let’s not waste any time and jump in to! 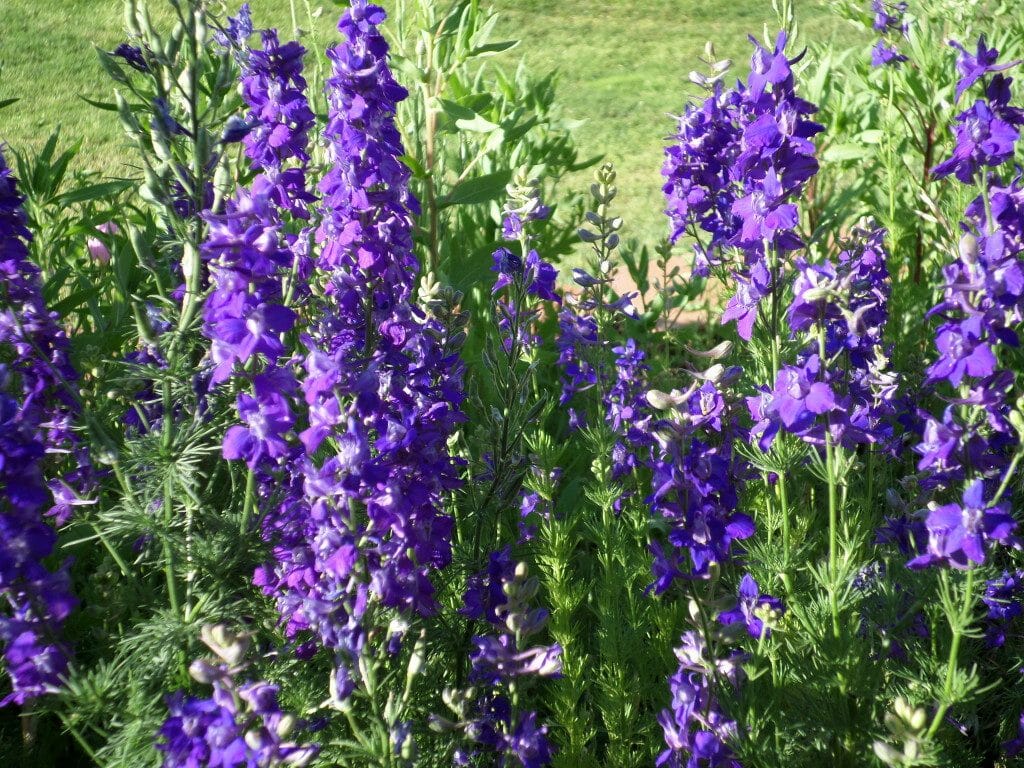 Also known as mountain larkspur and glaucous larkspur, the Delphinium flower is native to western North America from Arizona to Alaska. You can find this wildflower growing in moist mountainous environments, such as meadows and river banks.

The Sierra Larkspur blooms in early summer, a great time for you to spot some hummingbirds, and sometimes once again in late summer and early fall. This plant can grow from one to multiple green erect stems and depending on its variety, it can reach an average height somewhere between 2 to 8 feet tall.

On top of the stem, you can see a large inflorescence containing over 50 widely spaced flowers. Their petals and sepals have striking deep blue to dark purple colors. 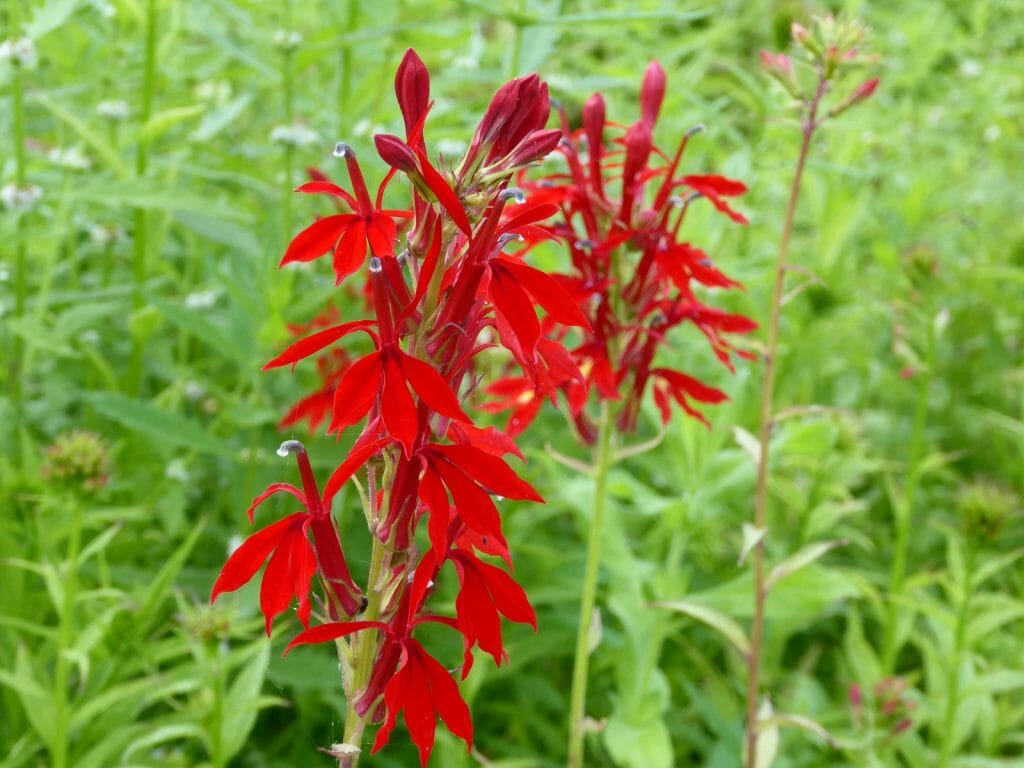 Widely present across the country, the Cardinal flower is native to the Americas, from southeastern Canada through the eastern and southwestern United States, which means you can find it in almost the entire lower 48 states!

This herbaceous plant grows up to 3-4 feet tall, requiring moist conditions and shady areas, so you can frequently see them in wet places like swamps and stream banks.

They bloom mid to late summer, with a gorgeous vibrant red color, ideal for attracting hummingbirds. They actually rely mainly on the little balls of energy for pollination. 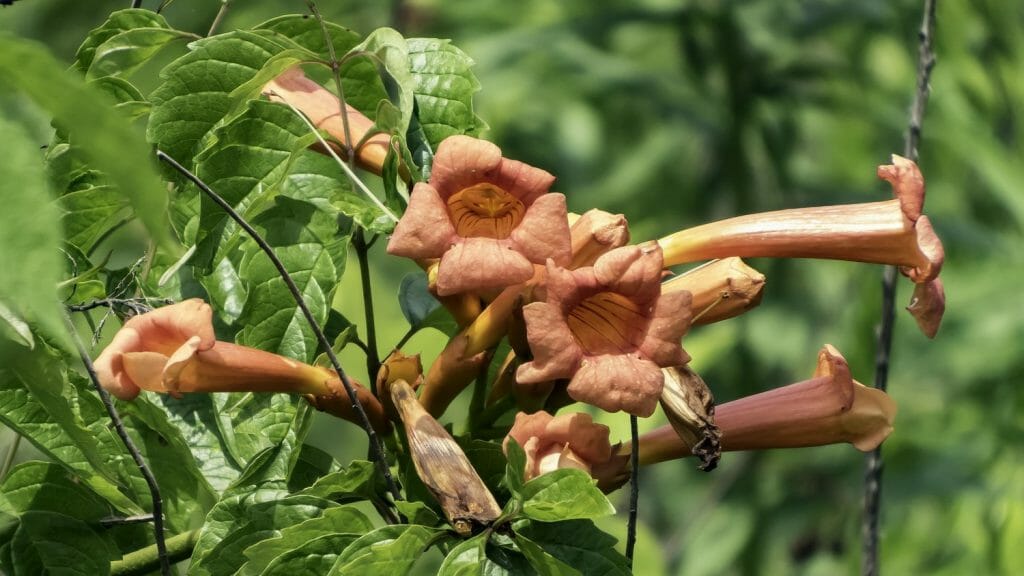 Alternatively known as Trumpet Creeper, Trumpet Vine flower is an excellent go-to if you’re hoping to meet some hummingbirds. In fact, in North America, the Trumpet Creeper goes by the name Hummingbird Vine.

This flower is native to the eastern United States, but it’s fairly easy to grow that you can find it naturalized in the western United States. When I say grow, I mean serious height! These plants are notorious for their crazy height, reaching 40 feet tall in many cases.

It’s a deciduous vine, commonly found in woodlands and riverbanks. Their distinct feature which makes them enticing for hummingbirds is their stylish trumpet-shaped flowers of bright red and orange colors. 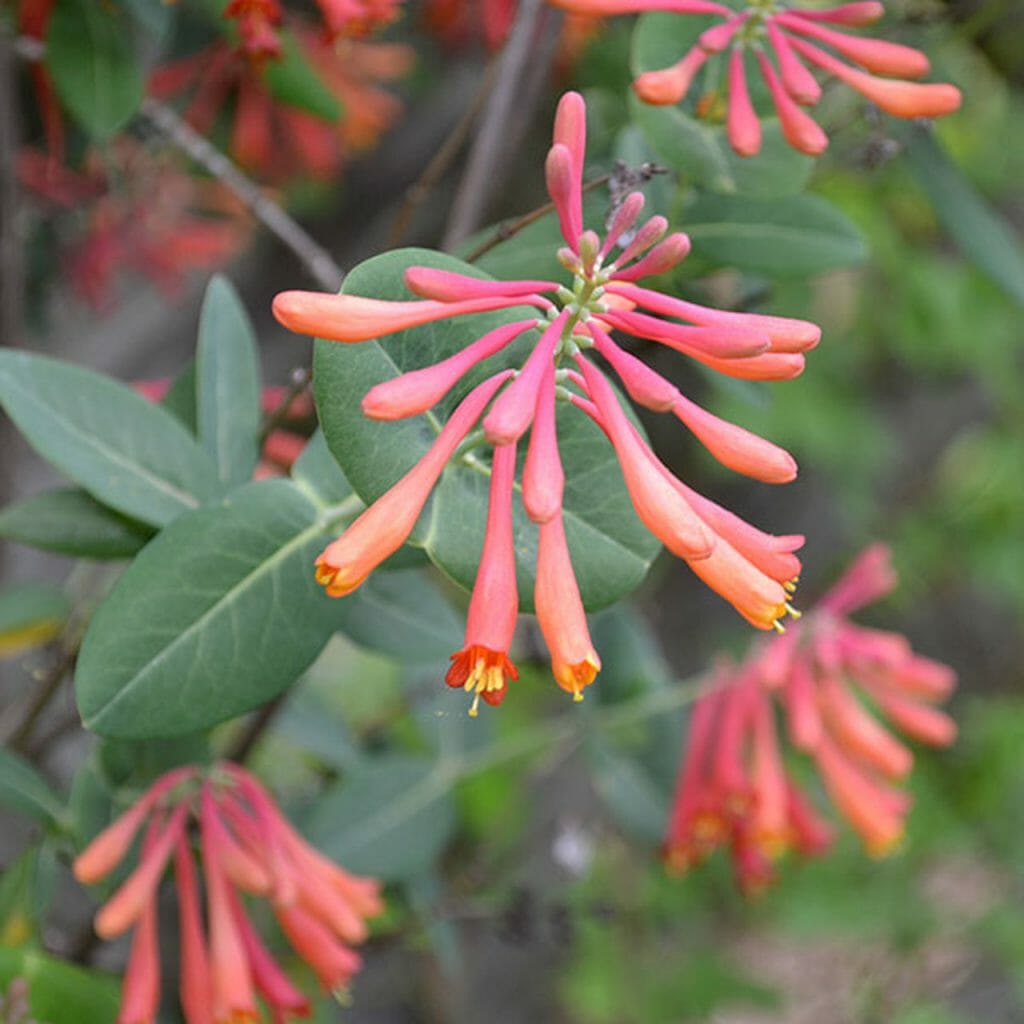 This vine also grows a bit smaller, reaching up to 20 feet tall. The bright clusters of red flowers are very inviting to hummingbirds, going as far as being a natural favorite of Ruby-throated hummingbirds. The orange to red flower blooms in late Spring. 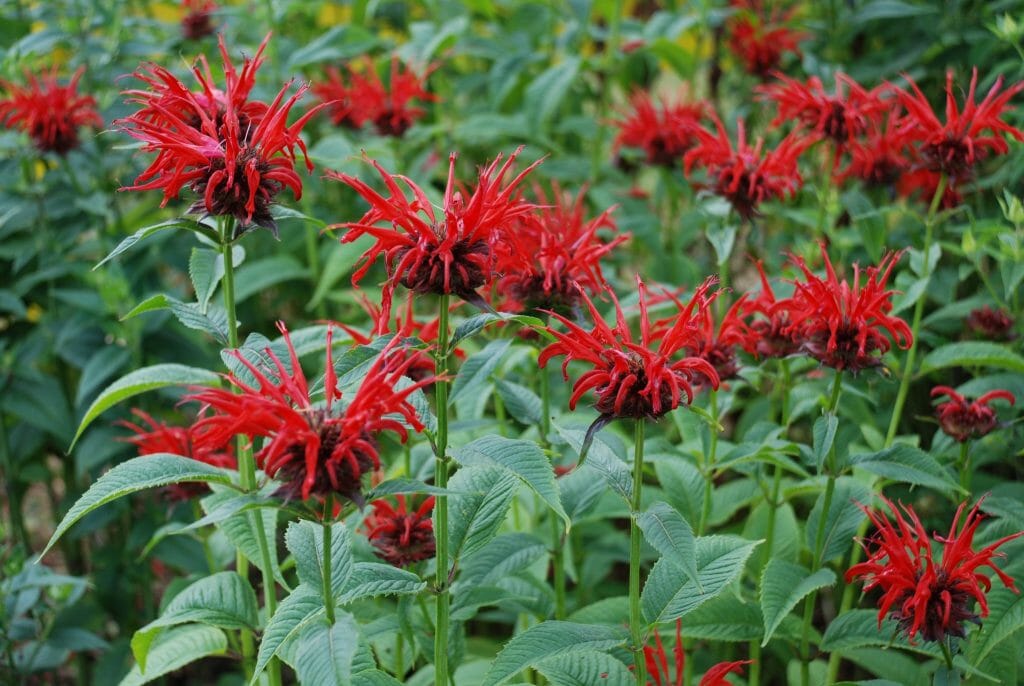 The Bee Balm is native to eastern North America, growing to rather a small size of up to 3 feet wide as well as 3-4 feet tall. It’s obviously not as large as other plants on our list, but it surely is as attractive to hummingbirds as any.

This flower blossoms in mid to late Summer, with the ability to remain blooming in early fall. Its petals are spikes but they come in a stunning array of colors like white, pink, red, and purple.

The Bee Balm is also commonly known crimson beebalm, scarlet beebalm, scarlet monarda, Oswego tea, or bergamot. This flower loves being out in the sun, requiring moist to wet soil for growth. 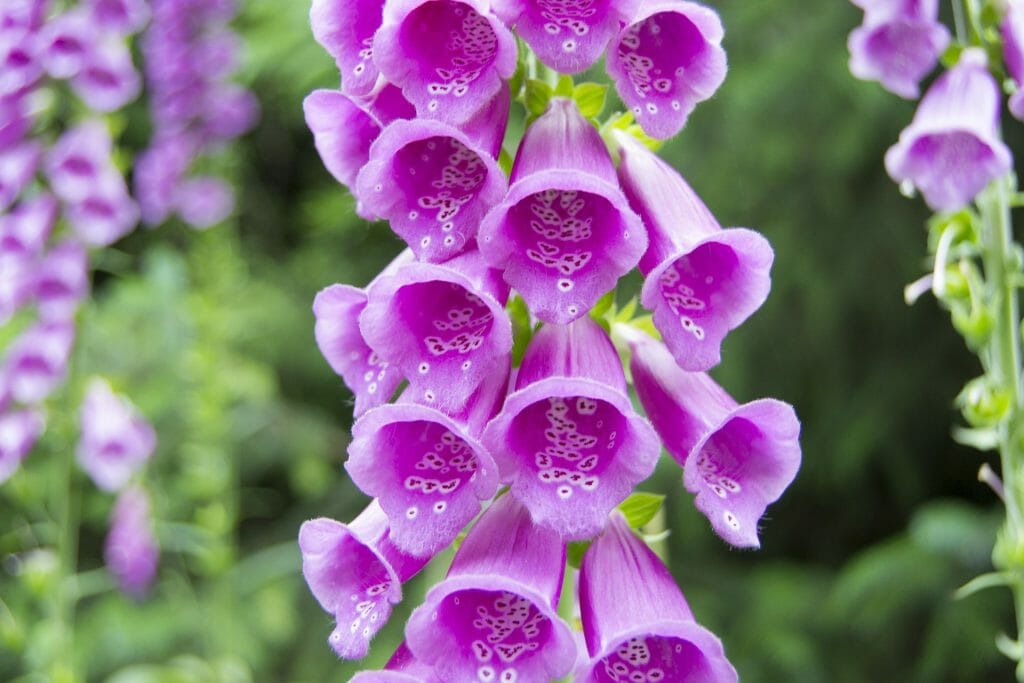 Considered one of the most beautiful plants on the planet (I think so too!), Foxglove does a kickass job of attracting hummingbirds thanks to its tubular brightly colored flowers.

Foxglove flowers bloom in mid-Summer and may be red, pink, yellow, white or purple depending on the variety. These flowers rest on a long leafy stem that can grow as tall as 6 feet. The flower itself, however, can be so easily fitted over one of your fingertips!

Digitalis Purpurea is native to western and southwestern Europe, western and central Asia, and northwestern Africa. It’s typically seen in a diverse range of habitats, such as sea cliffs, open woods, and rocky slopes.

You should keep in mind that Foxglove is an invasive plant. All parts of the plant are poisonous to people, pets, and livestock. So, be careful when dealing with it!

Nicotiana Alata is one of the species of tobacco, going by other names such as jasmine tobacco, sweet tobacco, winged tobacco, and Persian tobacco. It’s native from southern Brazil to northeastern Argentina.

It has an elegant look and a delightful scent, probably why it’s mostly grown as an ornamental plant. This species of flowering tobacco plant grows well over 25 inches tall. They carry branched flower stalks producing flowers that open only at night.

Flowers come in a variety of colors including white, pink, crimson, lime green, yellow, and crimson. Bloom starts in early summer and carries on into fall. 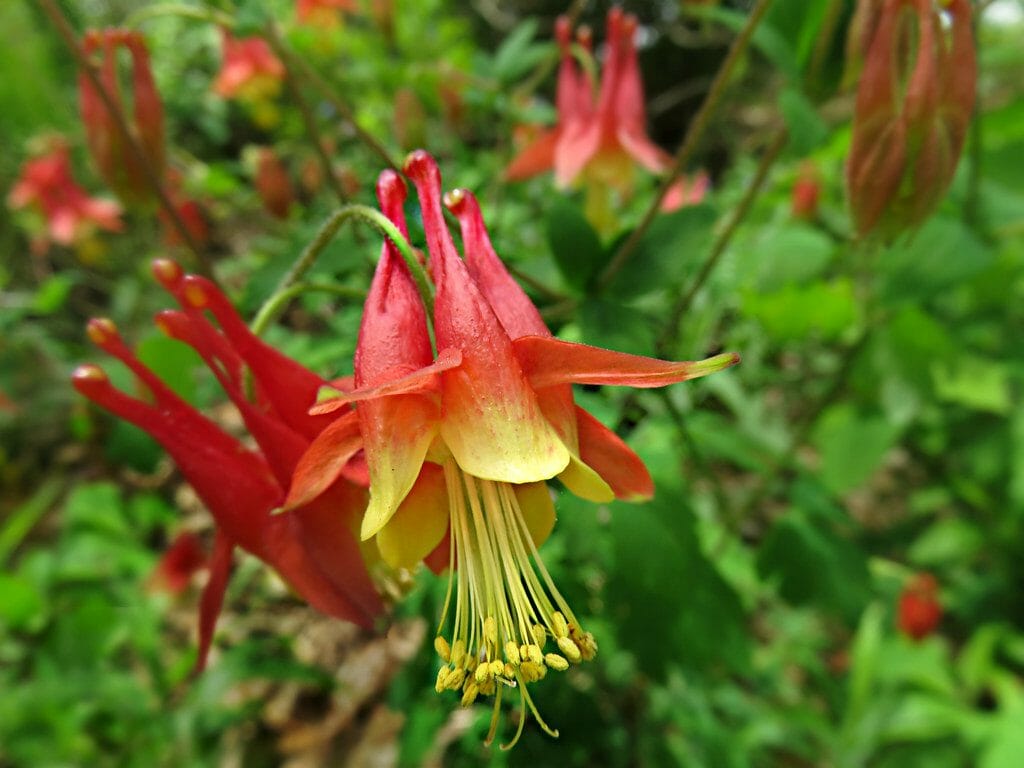 Columbine flowers refer to any of the numerous species from the genus Aquilegia. However, we’ll be talking particularly about Red Columbine, also known as Canadian columbine and wild columbine.

This plant is native to eastern North America where you can usually spot them on woodland and rocky slopes. It grows to reach up to 35 feet tall.

Wild columbine flowers have such a unique shape, with vibrant yellow and red colors. They’re early bloomers, typically in the late Spring of May, which is such a happy coincidence for hummingbirds as they make their way back north from their winter homes.

Each flower grows to a maximum of 3 inches long and carries its nectar in round ends which give insects a seriously hard time to access, but for a hummingbird, it’s a piece of cake!

Hummingbirds are one of the most interesting species to observe, their size, speed along with their looks and habits make them enticing targets for bird watchers. All you have to do is follow our lead luring them in, sit back, and voila!