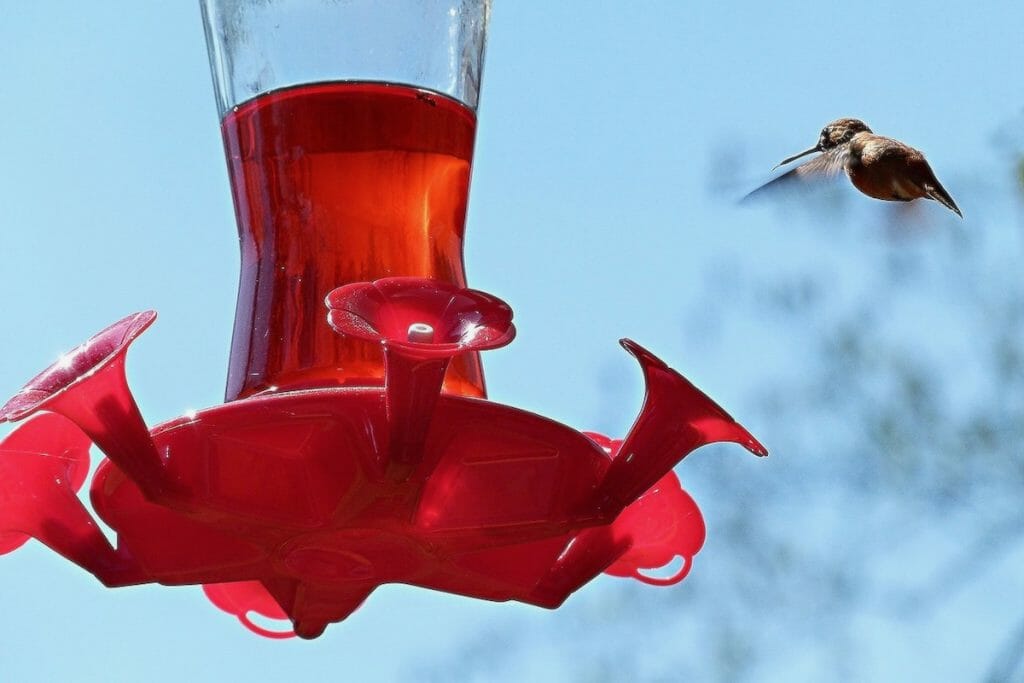 When people talk about red dye being harmful for hummingbirds, it’s a controversial subject. It’s just as controversial as talking about our children consuming artificial colours.

Red Dye that was exposed to rats and mice was shown to be highly carcinogenic and mutagenic. As a mutagen, Red Dye has the ability to actually alter the DNA of animals, including hummingbirds – so yes, it is bad for hummingbirds.

The colorant in red dye comes from petrochemicals. There’s anecdotal reports that this dye has left hummingbirds with tumours and these tumours may well be life-shortening, causing what would’ve been an otherwise healthy hummingbird to experience a premature death.

Artificial colourants like these somehow make it into commercially produced nectar that is supposed to be designed to feed and nourish hummingbirds.

Instead, these commercial nectars that include red dye may be killing them slowly but surely. Some sources state that manufacturers of these harmful nectar preparations are untouchable because manufacturers argue that there’s no solid research to suggest that these red dyes are harmful to hummingbirds specifically.

How Harmful is Red Dye for Hummingbirds?

This is a topic of ongoing debate. There are varying red dyes used as food colourants and the research around it has found that there’s the potential for it to be mutagenic. An article published in 2001 that can be seen here should give you more information on red dye.

There’s actually a portion of the article that suggests that Red Dye #40, also known as Allura Red can be used to extract mutagens from it.

This suggests a hidden toxicity. At the end of the day, artificial food colourants are extracted from petrochemicals, meaning that the petroleum that powers your car comes from the same source as these food colourants.

Artificial colourants that have carcinogenic or mutagenic properties are going to kill hummingbirds. It may take a prolonged period of time. But artificial colourant, especially ones dyed with red dye are more likely to develop tumours or experience DNA changes, which as some people may know can be catastrophic for humans as well as birds.

What Can I Use In My Feeder Instead?

As we all know, artificial colours aren’t the healthiest option for anyone. The good news is there’s a DIY recipe that’s relatively simple that should work out cheaper than commercial nectar, helping you to save money as well:

There’s no need to put any artificial colours in there, because best case it’s just unhealthy for the hummingbirds, and worst case it’ll lead to a shorter life with a lot more sickness and issues. There’s a reason humans that are conscious about their health tend to avoid artificial colours and flavourings, it’s because they’re unhealthy and there are alternative foods without them that are healthier and taste better. Avoid colourants where you can.

It all comes down to biology. The lovable hummingbird has a bright and colourful personality when it comes to what flowers it chooses to consume nectar from. That bright personality means they like to choose brightly-coloured flowers when they’re searching for nectar.

They’re big fans of red flowers, which is why a lot of people try and buy specifically red feeders. It’s understandable that people want red feeders, because they want to get as much watching-time as possible with them.

They’re adorable and they have friendly, eccentric personalities. According to Ask a Biologist run by Arizona State University, hummingbirds can see colours better than humans can including UV light.

Does Hummingbird Food Need To Be Red?

No. There’s no need for the food to be specifically red. It’s at least $5 cheaper for you to make your own (recipe here), and it’s healthier for the hummingbirds.

If you really love hummingbirds, then a brightly coloured feeder along with the recipe for homemade hummingbird food should see just as many in your garden as the commercial stuff, minus the damage to their health.

Do Hummingbird Feeders Have To Be Red?

Not at all. Your bird feeder can be red, as hummingbirds do love a juicy red flower. But hummingbirds love other bright, boldly-coloured flowers just as much. So long as it’s brightly coloured and well stocked, you should have visitors in the garden without a problem.

As for the ant issue, there are paints you can get to stop ants invading your tree or wherever you put the feeder. This is because the paint messes with the chemical systems that the ants use to find the food.