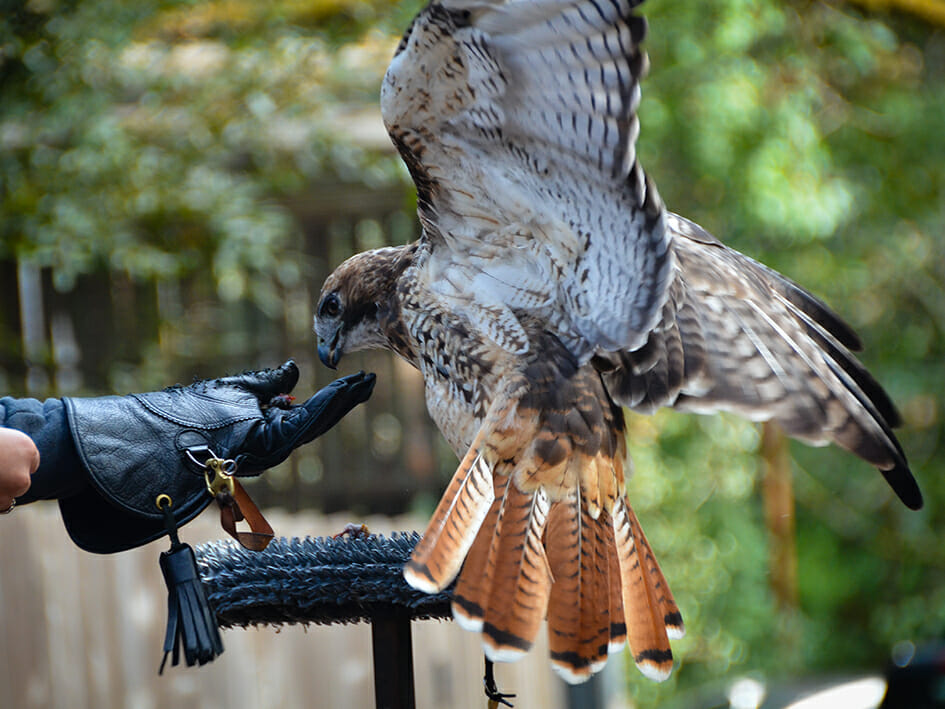 A red tailed hawk is a beautiful bird. In the wild you will find them all over America and they can grow to be large birds. Their bodies can be from 18 to 26 inches in length and their wingspan can be over 40 inches. The female tends to be larger than the male and a fully grown red tailed hawk can weigh up to 3 pounds.

The average life span in the wild is 15-21 years, and if you see one you could be forgiven for wondering how such a large bird shows such grace in the air.

Red tailed hawks can be found all over North America, from Alaska through Central America, down to Mexico and parts of South America and the West Indies. They are the most common species of hawk, identified by the red surface on the upper part of its tail, which gives it its name. They are also known in some parts as buzzard hawks and red hawks, and colloquially they can be called chicken hawks.

As with all birds of prey they are keen eyed predators and have proved themselves to be adaptable to changing environments and even learned to use man made items for nesting. They are very swift predators and take full advantage of their binocular vision and powerful talons when hunting their prey. Their vision is truly amazing and not only can they see colors which humans can see, but they can also colors in the ultraviolet scale which humans are not able to see.

While they prefer to hunt during the day their incredible eyesight also makes it possible to hunt at dusk when nocturnal animals and rodents are starting to wake up. If you’re very lucky you will see one perched on a telegraph pole as you drive through the countryside where they can sit and wait for prey to come along.

As with a lot of bird species, immature young have different coloring. The upperparts are brown, while the underparts are white and have spots and streaks. The tail may not contain any red coloring, but as they grow, usually in their second year, the tail feathers drop out and are replaced by adult, red plumage.

How big is a red tailed hawk?

There are up to 16 different subspecies of red tailed hawk. The plumage varies but most have brown upper parts and paler underparts, while some species have dark and rufous plumage. The red color of the tail can vary from species to species, but all red tailed hawks have some red in the tail, and for some this the amount of red increases with age. All red tail hawks have ‘patagial’ markings, which is a dark band on the edges of the inner underwings. The wings are long and broad to help them glide through the air and their short wide tails help their agility in the sky.

Size is determined by the subspecies, gender and habitat.

In the wild a red tailed hawk can live anything from 13 years to 25 years though there have been cases where they have lived for 30 years or longer.

Red tailed hawks breed during the spring, though the exact timing of this depends largely on their chosen habitat. As they make their home in so many countries, this also plays a part in when they breed. Their courtship is pretty spectacular too, involving many dangerous looking swoops and dives, with the male shooting back up at incredible speed. Their courtship display shows just how agile and fast these birds are in the air.

When they have found their mate, they breed for life. They work together on the nest and this is usually in the crown of a tall tree so that they get an excellent view of the surrounding area. Depending on the environment they can also build nests on cliff ledges and have even been known to build them on man-made structures such as billboard platforms.

While some birds choose to move away and rebuild their nest for the mating season, red tailed hawks often return to the original nest and simply repair it. The nest is usually made of dry sticks which are piled up to 6.2 feet high and up to 3 feet in width. When this is done the inside of the nest is lined with strips of bark, dry vegetation and foliage. Due to the size of the nest it can take up to 7 days for the red tailed hawks to complete it.

It is during the breeding season that these birds are at their most vocal, making sure that they protect their nest. During the rest of the year they are generally much quieter.

They usually produce 1 to 5 eggs during breeding and they are highly territorial during nesting. When hatched babies way about 2 ounces and usually leave the nest between 40 to 48 days old even though they will not be able to fly for another 2 to 3 weeks. After leaving the nest it can be another 6 to 7 weeks until the juveniles are able to start catching their own food. During this time the juveniles follow their parents while they practice flying and hunting, and the adults will drop food help teach the young to catch prey. It has been known for juveniles to remain with their parents for up to 6 months once they have left the nest.

Approximately half of the red tailed hawks do not make it through their first year of life.

You are most likely to see these birds in the wild, or the countryside. They are pretty versatile and while they do try to avoid colder areas they still inhabit a wide variety of environments. You will find red tailed hawks in scrubland, deserts, plains and grasslands, farmland, parks, woodlands, if they are not too thick, and even tropical rainforests.

Their ideal choice of habitat is a combination of open space which provides high places to perch and nest. The size of their territory is usually approximately 25 km² and once they are settled they usually remain in the same place for their whole life. They defend their territory with impressive and agile displays which involve steep dives and equally steep climbs.

As with all birds of prey they are fierce predators, but unlike other birds of prey they do not fly and hover to find their food. Instead they prefer to stay on their perch and when they spot their prey they swoop down and snatch it from the ground. It is an intelligent bird and knows how to vary its hunting strategy depending on the prey it has spotted. When it attacks, it is quick and very accurate.

The largest part of a red tailed hawk’s diet is rodents and small mammals, such as voles, mice, jackrabbits and ground squirrels but it also east snakes and carrion. If they live close to rivers or lakes, they will also prey on insects and fish along the edge of the water. In terms of size they can catch prey weighing less than an ounce or up to 5 pounds in weight.

The main threat to a red tailed hawk’s prey is from other birds such as golden eagles and other hawks.

Red tailed hawks’ main predators are other birds of prey. They often have to wrestle with them for food or nesting sites. While they aggressively protect their nest, great horned owls and crows can destroy eggs and kill juvenile red tail hawks while in the nest in order to claim it as their own.

The red tailed hawk is not considered to be endangered and their population has shown an increase in recent years and it is the most commonly seen bird of prey on the continent. The main threat to them is the loss of their habitat as we continue to build on more land and modern technology such as cars.