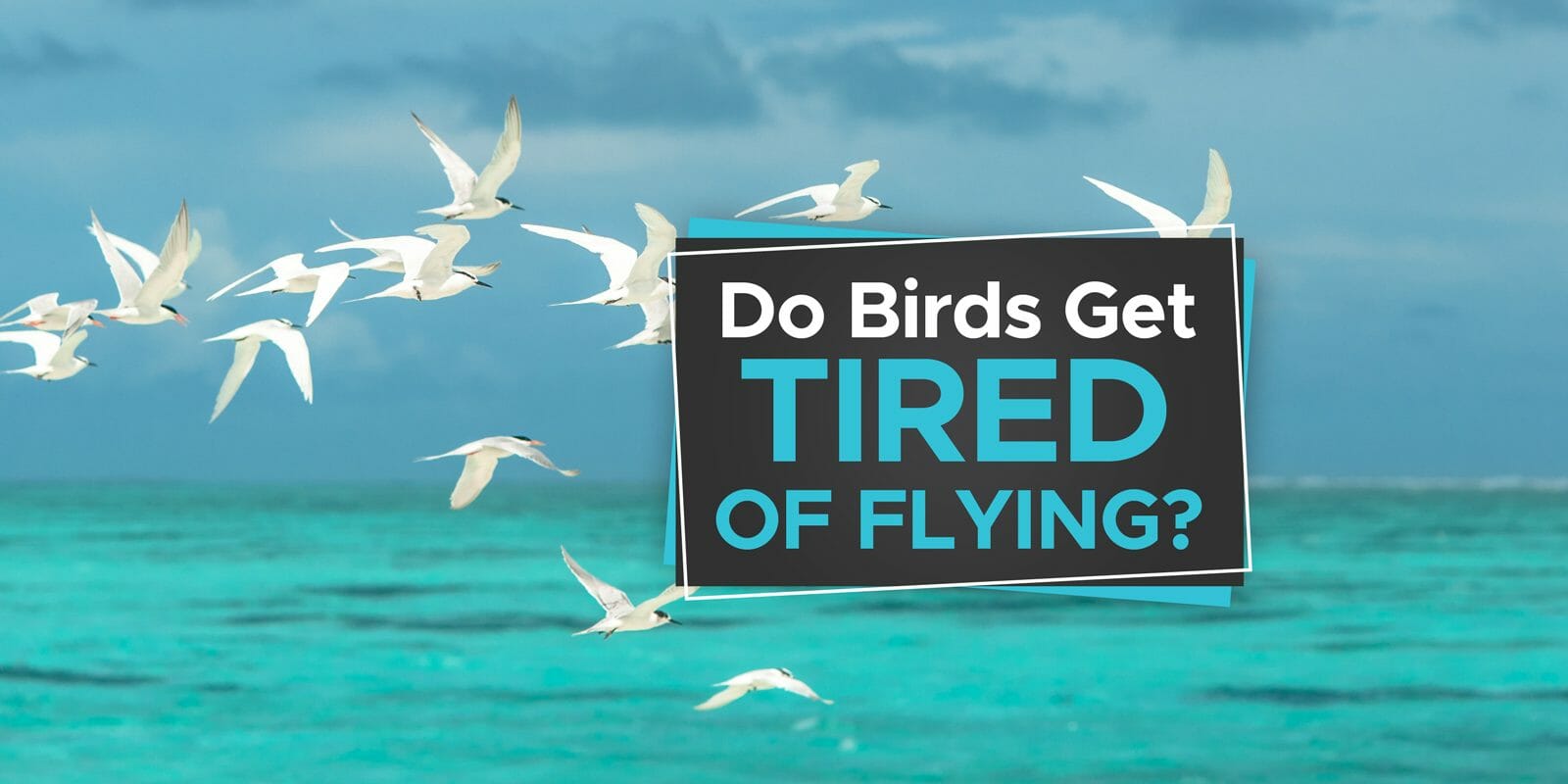 Have you ever marveled at the long migratory flights of birds and wondered whether they ever get tired of flying? These birds fly for thousands of miles to reach their destination. Surely, this must use up a lot of energy. So, do birds get tired of flying?

During normal day-by-day flights, birds don’t tend to get tired of flying because they’ve developed ways to conserve their energy. They use air-thermals to glide and create lift which means that they don’t have to beat their wings as much. Birds also have hollow bones which makes flying easier.

You will find though, that birds do feel a level of exhaustion after they’ve completed a long migratory flight. In fact, some birds will not reach their destination due to fatigue. However, this is not common because birds are smart enough to prepare for their long journey well in advance. 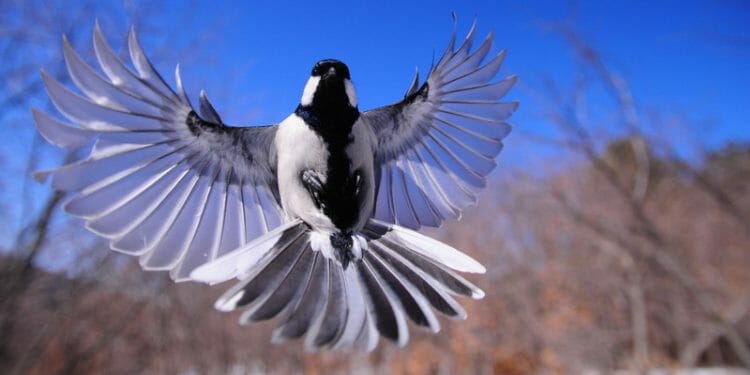 How Do Birds Maintain Their Energy Levels While Flying?

It’s not difficult for birds to maintain their energy levels while they’re flying. As you know, the birds that we commonly see today, have evolved over thousands of years. This has allowed them to develop different strategies that make flying easier and less stressful.

One of these strategies is to use rising air-currents or thermals that allows them to glide through the skies without having to constantly flap their wings. Not using their energy to flap constantly, means that they can stay up in the air for extended periods of time.

You can see this in action by watching large raptors like falcons and eagles as they soar through the sky above and rise and dip as they find new thermals to ride.

You’ll also be surprised to learn that some bird species even have the ability to sleep while they’re in mid-flight. Now, you might be asking how they do this. Take the frigate bird as an example. This particular bird has to fly over the ocean in search for food. This means that the bird will have to fly many miles over open water where there is nowhere for it to land.

This bird and many others, has the unique capacity to put one side of its brain to sleep while the other side stays alert to watch its surroundings. Ultimately, this means that the bird will fly with one eye open and the other one closed. How amazing is that!

Another strategy that is commonly used by seabirds such as cormorants is referred to as skimming. This is when the birds fly close to the level of the water in order to reduce drag. This is due to the changing airflow around the wing when it’s close to a large surface. It’s a little like a small car driving closely behind a large truck. The drag of the truck reduces the energy needed to propel the little car forward.

We can take this analogy even further by considering the flight pattern of geese. If you’ve ever witnessed a flock of geese flying overhead, you might have marveled at the strange V formation that they form while in flight.

There’s a good reason for this. The birds behind the leader are using the drag from the birds in front to help them use less energy. Then, when the leader gets tired, they change positions so that the lead bird has time to recoup its strength. 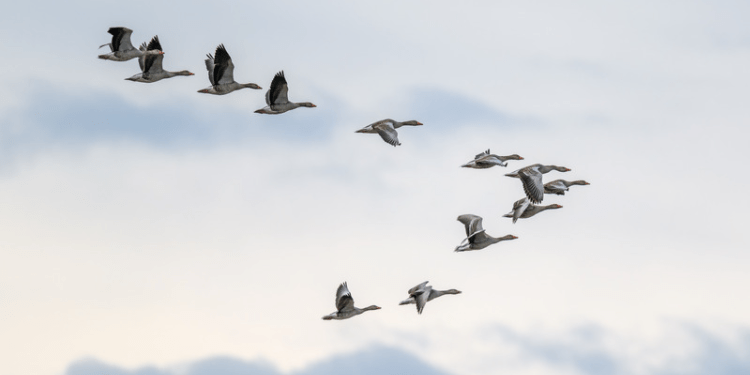 Birds Are Supremely Designed For Flight

Apart from some very clever flight strategies, birds are also well-designed for flight. You see, birds have hollow bones to make them lighter. Having hollow bones significantly reduces their body weight and makes it much easier for them to stay in flight. It also makes it easier for the birds to take off.

But don’t be fooled. These hollow bones are incredibly strong thanks to the cross-sections inside the bones.

How Birds Prepare For Long Flights

Many birds will prepare for their migratory flights many weeks before by feeding on energy-rich foods to add some additional fat to their bodies. This gives the birds enough fat reserves to take them right through their lengthy journey.

Some birds, such as swallows, will even eat while they’re flying. They have the capacity to catch insects in mid-air that will keep them sustained as they continue on their journey.

How Long Can Birds Stay In The Air Without Resting?

The answer to this may also amaze you. Some birds can stay in the air for months without once stopping to rest. This means that these birds will cover thousands of miles, usually across open waters, without actually landing on solid ground.

As an example, consider the common swift. This little bird will easily cover a distance of 6000 miles while it’s on its migratory journey. This journey takes these birds from Europe all the way to central Africa. In fact, this tremendous journey can take up to ten months.

Consider also, the Alpine swift. These birds have been known to fly non-stop from Switzerland to Africa. This entire journey can take around 200 days.

Interesting Fact
The longest recorded journey of a bird flying non-stop was that of a Bar-tailed godwit. This bird was recorded flying a total distance of 7,500 miles from its starting point in Alaska to its resting point in New Zealand. 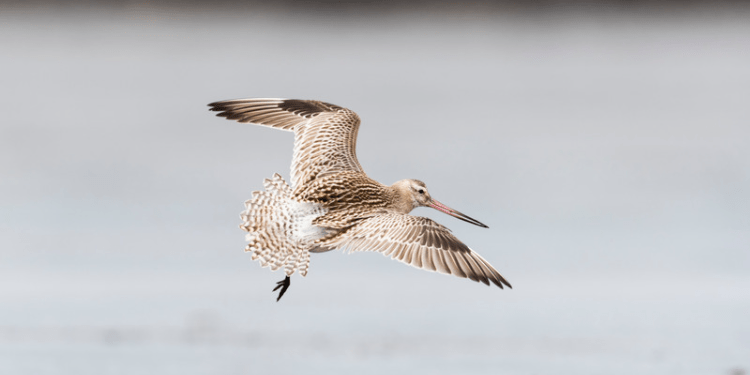 Is It Possible For Birds To Die While In Mid-Flight?

There have been many instances where birds have actually died in mid-flight. Quite commonly this happens when a bird collides with unmovable objects such as wind turbines, electrical wire, power poles or even natural rock cliffs. In fact, these types of collisions are more common than you might think and research is constantly being conducted on how this phenomenon can be avoided.

Another reason that birds might die while in flight is due to exhaustion. This is more common in migratory birds and can usually be the result of an over-tired bird colliding with a solid object.

Bad weather can also be a concern for birds when they’re in mid-flight. Natural disasters such as hurricanes can be detrimental to birds who are in flight as can strong winds.

Is It Common For Migratory Birds To Take A Rest During Their Long Flights?

These sites are quite famous with bird watchers as excellent places to visit to see huge numbers of migratory birds. These stopover sites allow the birds to feed and rest before they resume their long journey to their destination. 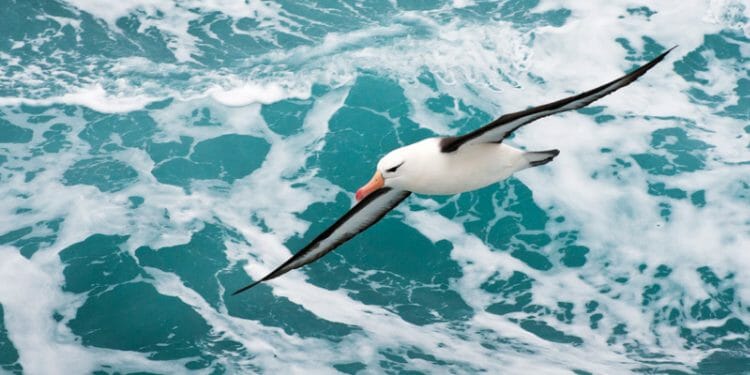 How High Up Can Birds Fly?

Some birds can comfortable fly up to high altitudes of 10,000 to 13,000 feet in one stretch. This includes many different species of migratory birds.

Commonly, birds with long wingspans, such as geese, can effortlessly fly up to altitudes of 13,000 to nearly 20,000 feet when they’re on their migratory journey.

This high-altitude flying allows these birds to stay safe from predators. Plus, the cooler air at these altitudes helps to keep them from overheating while in flight.

What Are The Benefits Of Flying For Birds?

Flying has many benefits for birds. It allows them to get away from predators and makes it so much easier for them to find food. In addition, it allows them to travel over long distances in the shortest possible time.

Why can’t birds fly in the rain?

It’s actually quite difficult for birds to fly during a rainstorm. With the rain, comes a drop in air pressure, meaning that the air is less dense. This makes it hard for birds to fly well.

Penguins are such cute little creatures as you watch them waddle onto the shore. The reason that they can’t fly is because they are unable to fold their wings. You see, their wing bones are actually fused straight. This makes the wings completely rigid and allows these cute birds to use them just like flippers.

What was the first bird to fly?

The first bird that was discovered as having the ability to fly was the Archaeopteryx lithographica. Remains of this species were found in Germany in Jurassic sediments. The skeleton that was found was around 153 million years old.

It’s common to wonder whether birds get tired of flying. In general, birds have developed the ability to conserve their energy while they fly. This has made flight almost effortless for these animals.

Even migratory birds, who have to fly many thousands of miles, do so every year, some without stopping on the way. 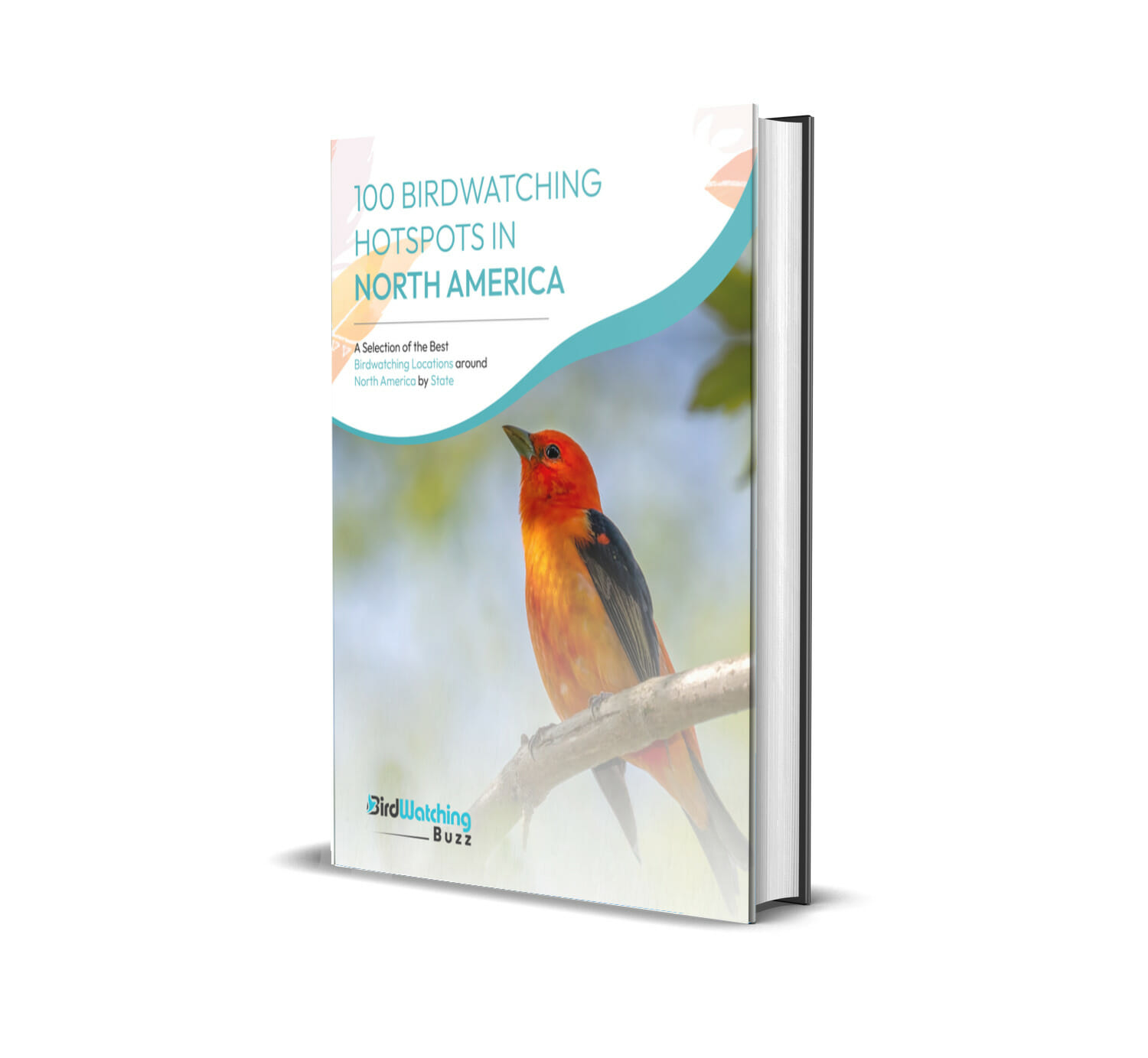