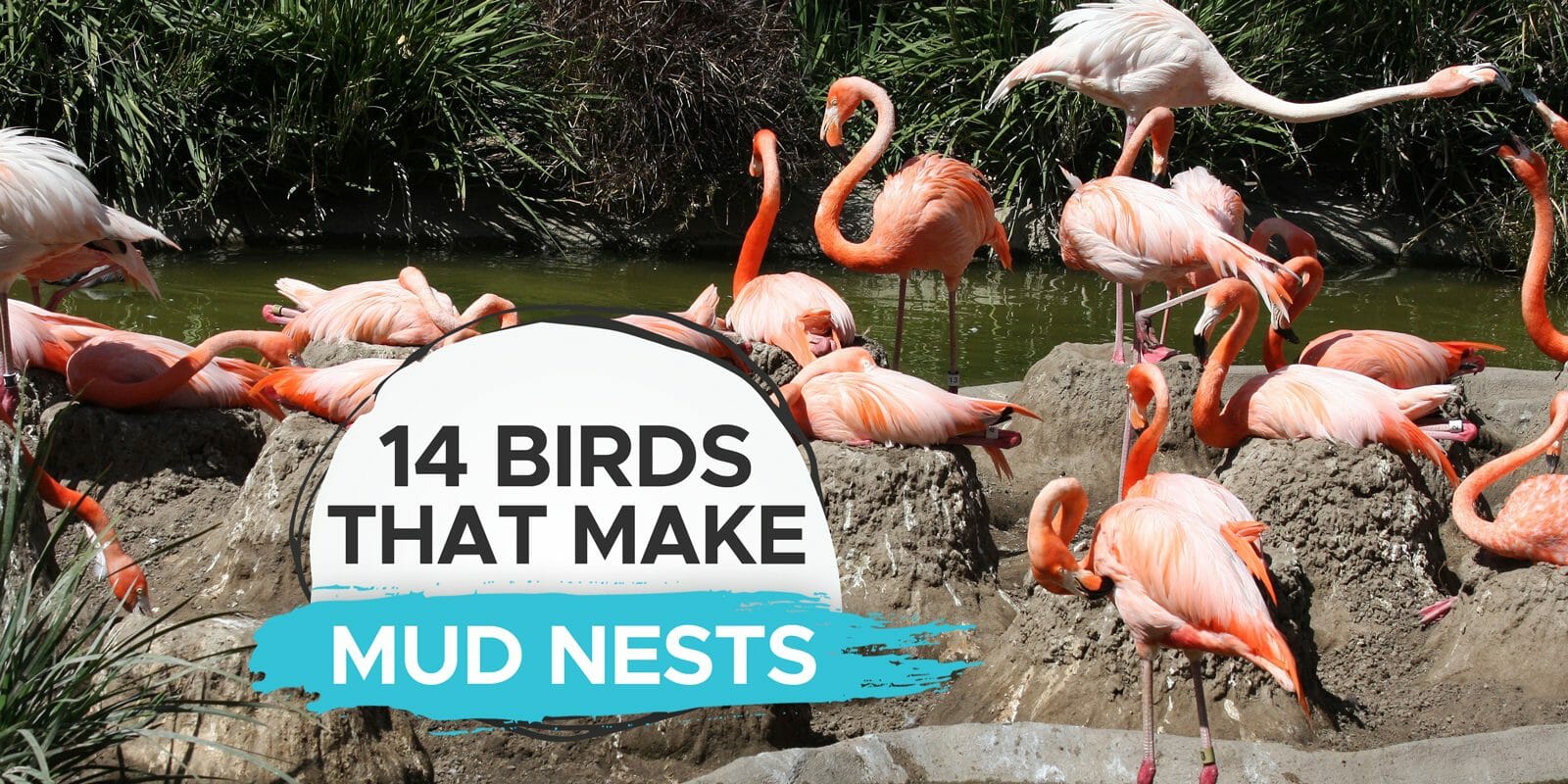 Bird nests are as varied and unique as the birds that make them. If you search for them, you can find nests made from twigs, leaves, grass, spider webs and even mud. So, which birds make mud nests?

There are quite a few species of birds that will primarily make their nests out of mud. These include swallows, martins, magpies, thrushes, choughs, and even American flamingos. Some of these birds will build their nests entirely from mud while other use a combination of different materials and use the mud to strengthen their nests and to give them a solid structure.

Let’s look at the different birds that build their nests using mud and how they go about it. 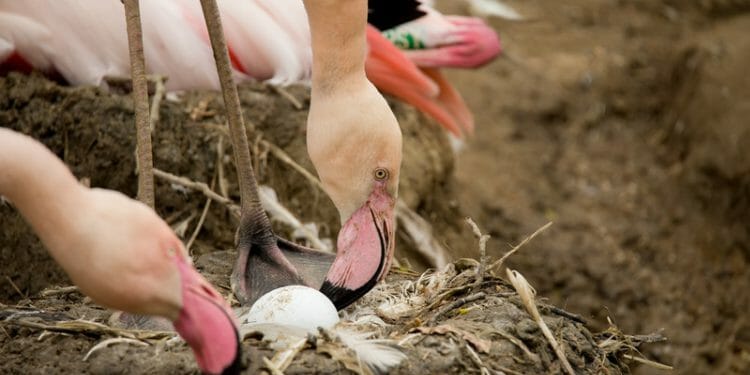 Flamingos build their nests on the ground primarily out of mud. They will usually select a spot that is raised in order to keep the eggs and the chick at the perfect temperature.

Both female and male flamingos take part in nest building. They use their bills like shovels to pull the mud in around their feet into a mound. In addition to using mud, flamingos will also add feathers, stones and straw to their nests. Surprisingly, these mounds can be as tall as 12 inches.

Once the nest has been constructed, the flamingo will create a small depression in the top of the mound and then the female will lay one solitary egg. 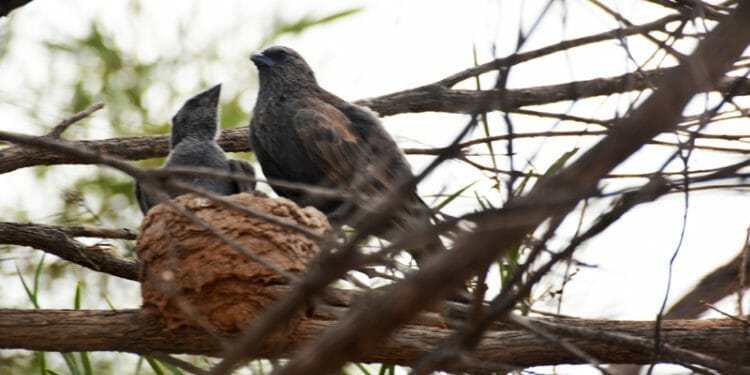 The apostlebird is quite unique in that it forms a breeding unit that may include up to 10 birds that will all nest together. In this group, there is one dominant male and several female birds as well as a few juveniles.

When it comes to nest-building time, these birds will construct large mud nests that are bowl-shaped. These nests are situated high up on horizontal branches of very large trees. 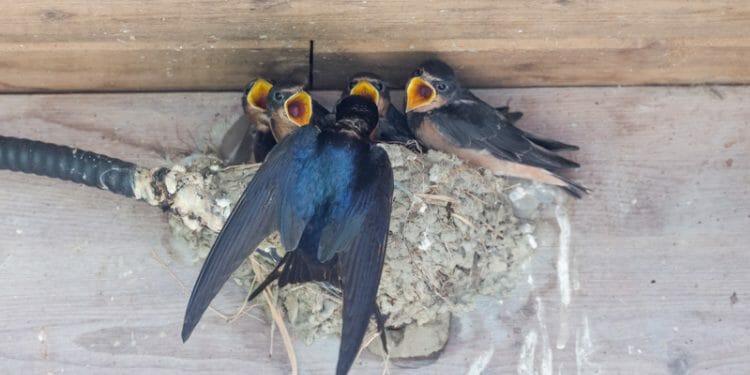 Barn swallows are mostly found in populated areas and will build their nests in garages, sheds, barns and other man-made structures. They’re quite small and will often find a small opening that they can use to get into a building. They’ll then build their nests high up under the eaves.

Their nests are mostly made from mud but they may also add some grass, twigs, leaves, feathers and even pieces of plastic. You’ll find that these nests cling precariously to a vertical wall. Both the male and female swallows take part in building the nest. 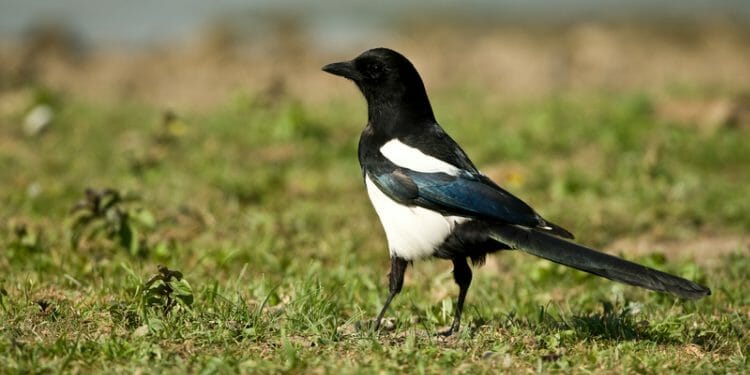 Black-billed magpies prefer to nest high up in deciduous trees but will sometimes nest in deserted buildings. Their nests are dome shaped and are constructed by both the male and the female birds.

Only the bottom half of the nest is made from mud as well as grasses, twigs, leaves and an assortment of other plant materials. To complete the nest, the top half is constructed using mainly twigs. Interestingly, it can take a pair of magpies around 50 days to complete their nest. 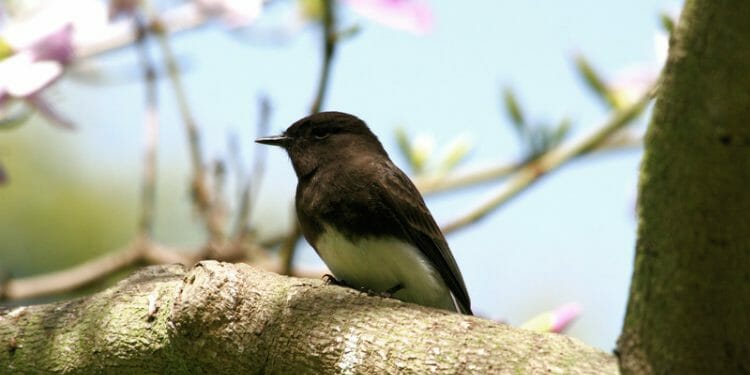 Black phoebes prefer to nest on the sides of cliffs or under the eaves of buildings. In this species, only the female bird will construct the nest. The nests are cup-shaped and constructed using mud. They are then lined with plant materials, grasses and even hair. 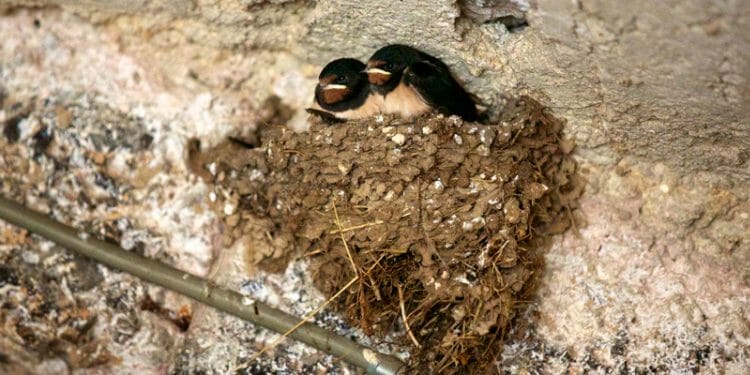 As you would imagine, cave swallows prefer to build their nests in caves. These nests are attached to the rock walls inside the cave. The nests are cup-shaped and mainly constructed by the female bird. The bird will also use other materials such as bat guano, feathers, grasses and pieces of bark. 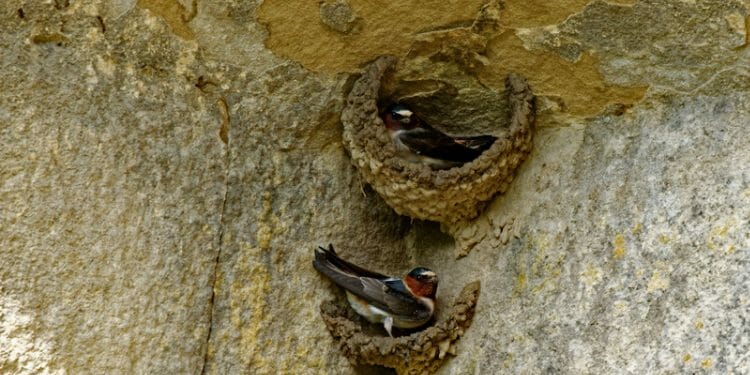 As the name would suggest, cliff swallows build their nests on ledges and crevices on the sides of cliffs. Their nests are primarily made of mud and look very much like up-side down igloos. Because of their location, it’s much easier for these birds to use mud for their nests because this will stick to the cliff face and not be blown away.

These industrious little birds use their beaks to carry tiny pellets of mud and clay to their nesting site to construct the nest. The well-constructed nests are then covered with grass and feathers to provide additional insulation. Additionally, the inside of the nest is often lined with grass, leaves, feathers and even horsehair.

Cliff swallows prefer to nest in large colonies and quite often they’ll stack their nests very closely together. Because it takes such a lot of time and effort to construct each nest, these birds will often use the same nest year every year. 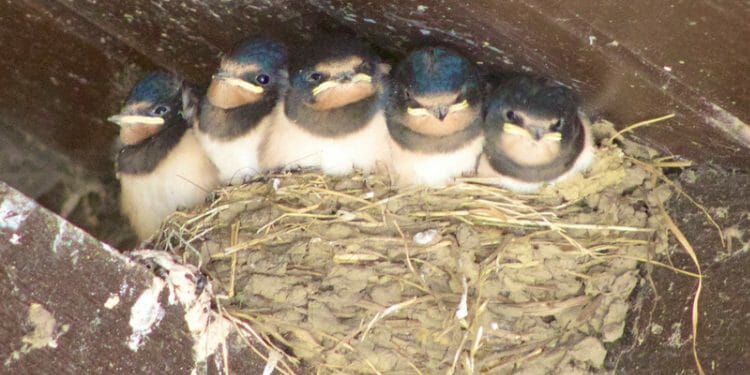 House martins are mostly found in populated areas and will build their nests on man-made structures such as the outer walls of buildings, inside sheds, on ledges or under the eaves.

To build their nests, both male and female birds will gather various materials such as grasses, twigs, and feathers to firstly construct a basic nest. They then use the mud to coat and help to strengthen the nest. These birds will commonly use the same nest for around four to five years in a row. 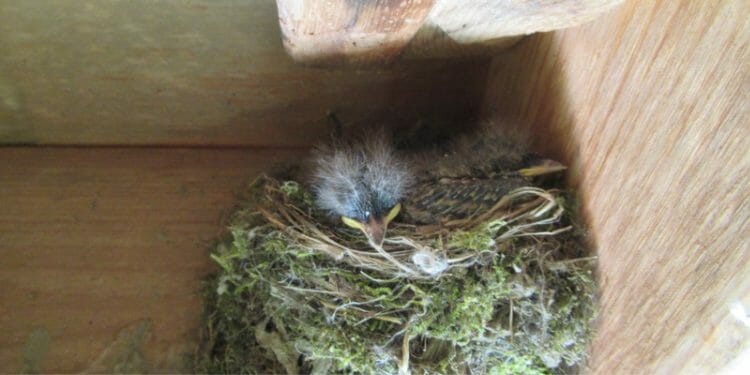 Eastern phoebes are tiny birds that prefer to nest on man-made structures such as the sides of buildings or on the framework of bridges. Sometimes, these birds will also build their nests on the ground.

Both male and female phoebes will construct their mud nests. Once constructed, these nests are then lined with moss and grass to create a soft bed for the eggs and the hatching chicks. 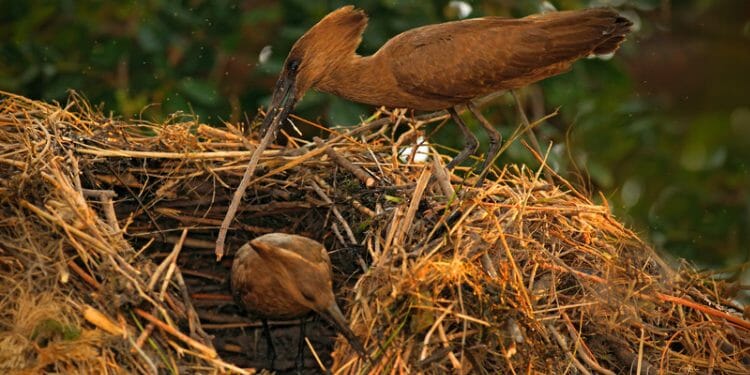 These African birds build their large nests in the forks of large trees. Each nest can weigh as much as 110 pounds and can be around 4.9 feet in diameter. These nests are strong enough to support a fully-grown man.

The nests have a roof and an entrance tunnel made from mud. This tunnel bends upwards in an effort to stop any predators from coming into the nest. The nests themselves are first built using sticks and are then lined with mud to provide insulation. 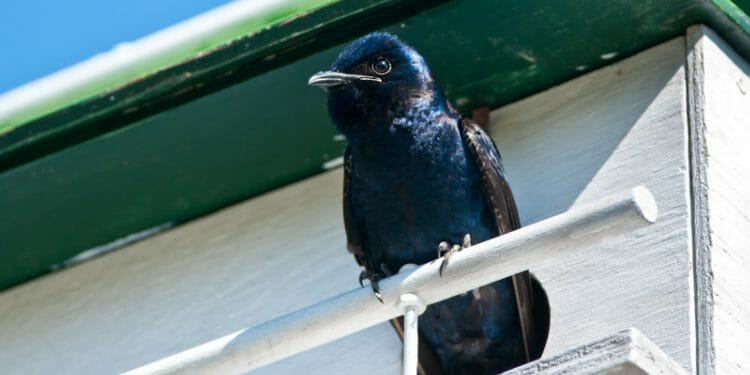 Purple martins prefer to nest in more open areas like meadows and grasslands. They’ll build their nests in dead trees, on the side of a cliff, in tree hollows or sometimes in a backyard birdhouse. Both male and female birds share in the task of nest building.

First, the birds will gather twigs, grasses, pine needles and straw to make the basic structure of their nest. Then, they use the mud to strengthen their nests and to hold them together. You’ll often find colonies of purple martins all nesting together. 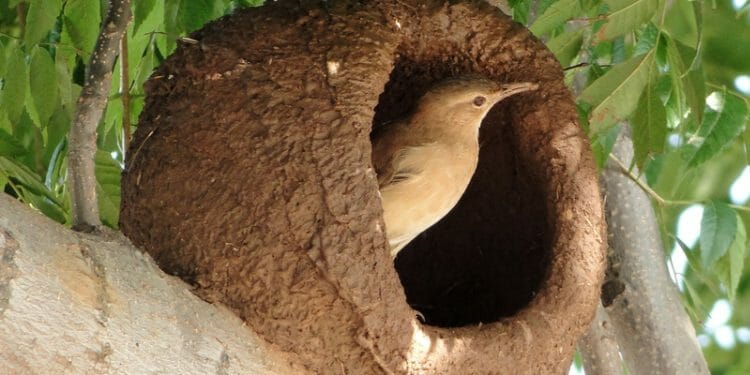 These birds generally build their nests on the branches of large trees. The nests are constructed primarily of mud and clay and are shaped like a domed brick oven. Both the male and female birds share in the nest building. 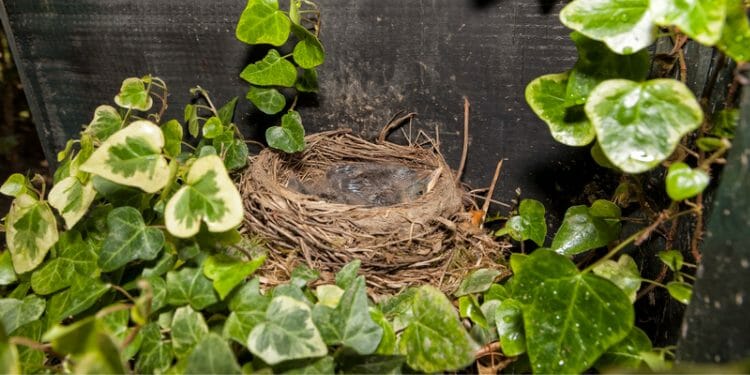 These birds like to build their nests on the top of thick branches in large trees. Spotted morning thrushes are particularly fond of nesting in palm trees. They construct their nests using mud and then line them with leaves, grasses, bits of roots and bark fiber. 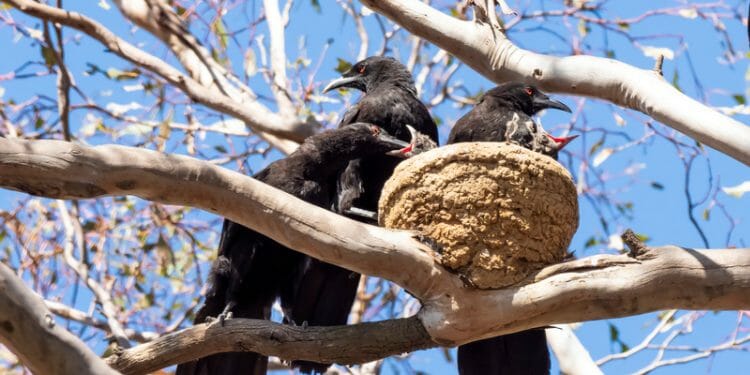 White-winged choughs are large birds and will nest high up in the branches of tall trees. Their nests are constructed primarily of mud and are nicely cup-shaped. These nests are relatively deep so that they can accommodate the growing chicks once they hatch.

The female chough will usually lay three to five eggs at a time. The eggs are cream-colored and they have dark-brown to lavender spots.

Some Birds Use Their Own Saliva To Add To The Mud

Birds like swallows will add their own saliva to the mud when they build their nests. This acts as an adhesive to help the mud stick.

When a swallow wants to build a nest, it will go in search of some mud, usually near a river or other body of water. It picks the mud up, drops it in the water and proceeds to roll it into a ball. The swallow then picks up the ball of mud and flies back to the nesting site. While this occurs, the swallow adds its own saliva to the mud ball.

A swallow’s saliva contains a compound called “mucin”. This is a glycoprotein that acts as an adhesive so that even after the mud dries, the nest will not fall apart. 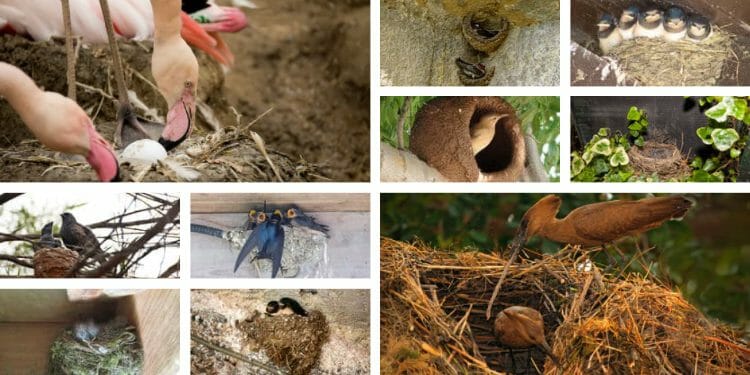 The mud helps the nests to cling to cliff faces and other horizontal structures where a nest just made from twigs and leaves would easily blow away. Other birds use the mud to provide insulation for their nests or to provide extra strength.

With some species, it takes so long to build a mud nest that they will use the same nest year after year until it’s is not usable anymore.